Why was Andy Coulson Acquitted? 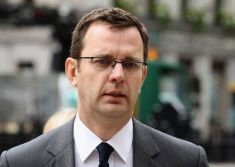 Why was Andy Coulson acquitted ?

When the perjury trial against former News of the World editor Andy Coulson opened at Edinburgh things looked rather bleak for the accused. The facts of the case seemed clear enough. In 2010 Coulson testified under oath at the trial of Scottish politician Tommy Sheridan that he had no knowledge that his reporters had been illegally intercepting mobile phone voicemails, his evidence was confident and unequivocal, even winking at Sheridan from the witness box during his cross-examination. However just three years Coulson was in a cell at Belmarsh prison after being convicted of conspiring to hack phones and the Prime Minister had branded him a “liar” in parliament.

It looked like an open and shut case of perjury, a slam dunk. A number of Coulson’s friends and colleagues recommended he plead guilty to avoid the trauma of another trial.  Yet in one of the greatest escapes in legal history Coulson walked free from court without the jury ever being given the chance to consider the evidence.

When the prosecution closed it’s case last week everyone involved in knew they were in trouble. The witnesses called by the Crown had been compelling, three senior reporters at the now defunct tabloid testified that Coulson had been fully aware of the phone-hacking being carried out by staff at the newspaper. A former news editor had told the court he had personally showed Coulson a transcript of voicemails intercepted from the phone of murdered schoolgirl Milly Dowler, testimony no court had heard before. The defence cross-examination of the journalists had been cursory, suggestions they may have been confused or bore a grudge were advanced, but with no great conviction, Coulson’s team had another trick up of their sleeves.

To secure a conviction on a charge of perjury it is not enough for the prosecution to show that a witness has lied in court, they also have to prove the evidence they gave was “material” and “relevant.” For example, If a witness tells an untruth about the colour of shirt a defendant was wearing on the night of an assault that is not perjury, unless the colour of the shirt was important in terms of identification. In short the false testimony given by the alleged perjurer has to matter, it can not just be trivial or irrelevant.

Despite this being the key legal point that had been argued about for months in pre-trial hearings, the crown led not a single piece of evidence on the issue, Sheridan was not called to explain why he called Coulson, no mention was made of the wider context of phone-hacking or the new information that has came to light since 2010. The Crown presented their case as if relevancy didn’t matter, and the defence battered them for it.

Murdo Macleod QC, Coulson’s formidable defence counsel, argued that the whole issue of phone-hacking was peripheral to Sheridan’s conviction, even if his voicemails were intercepted, he contended, none of that touched on why Sheridan had been found guilty. The problem for the Crown was that they themselves had argued that phone-hacking was irrelevant to Sheridan’s guilt or innocence and the court was shown the closing speech from the 2010 prosecution saying exactly that. ‘How can the Crown say in 2010 this evidence doesn’t matter then turn around in 2015 and say it does?’ MacLeod asked, adding “the prosecution is riding two galloping horses and they are both going off in opposite directions.” On Monday Judge Burns agreed with the defence and acquitted Mr Coulson, a decision then put on hold for 48 hours to allow the prosecution time to appeal.

On Wednesday the Crown, unsurprisingly, declined to take up that opportunity.

Tommy Sheridan has already called the result a “shambles,” and there is embarrassment amongst the Scottish legal community about the botched prosecution. Suspicions have been raised that the Crown was more interested in avoiding an appeal against Sheridan’s conviction that they were in securing one against Andy Coulson. Others have suggested there was a degree of complacency about how easy it would be to convict the former editor given the weight of evidence against him that had been gathered by the Metropolitan Police.

Coincidently, the night before Coulson was acquitted the Scottish Crown office announced it was dropping charges against the only two former News of the World staff north of the border who had been charged in relation to allegations of illegal activities at the Scottish News of the World.

Unless something surprising happens the official investigation into phone-hacking in Scotland is as good as over.