Whatever the Result, “OXI” Has Won 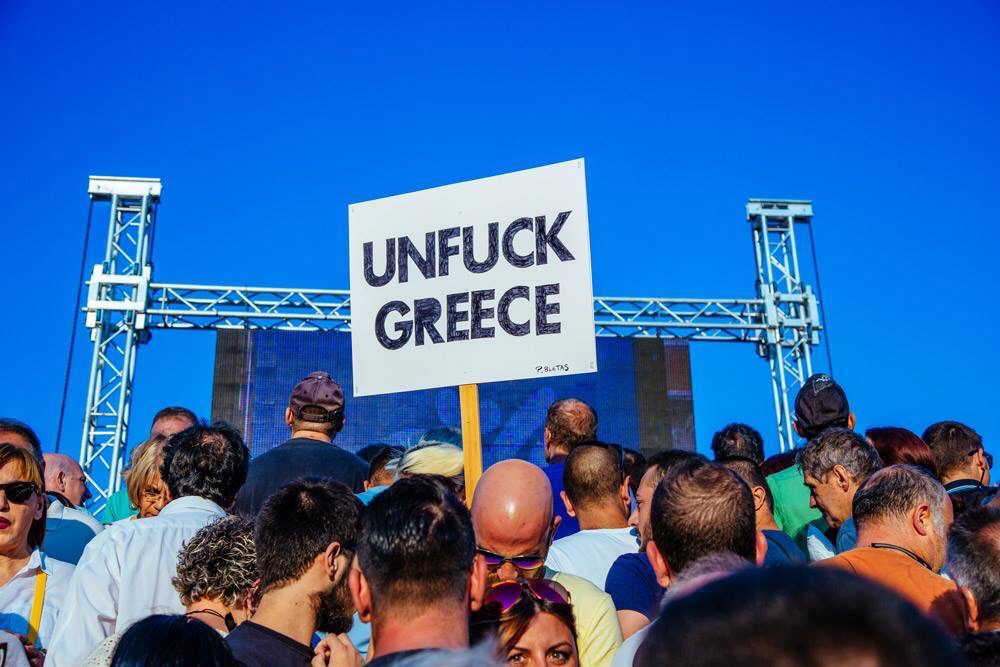 OXI, the “no” to the unconditional surrender demanded of Greece, has already won. We just don’t know how big the victory is yet. It may seem a bold prediction, but I’m not talking about the result of today’s referendum, monumental though that is, but about something much more profound.

All week the parallels between the Scottish referendum on Independence last year and what is happening in Greece, have been unavoidable. The fearmongering and predictions of doom have been hundred-fold, of course, and the situation much more extreme, but the way in which the representatives of the corrupt status quo have lined up, one by one, behind the “yes” camp, the way in which they have chosen to frighten, rather than convince, has been unmistakeable.

In June 2011, in my very first piece about the Greek crisis, I wrote about the occupation of Syntagma Square. I wrote that what was happening there was beautiful; filled with hope; gloriously democratic. About how the crowd of thousands shared what little food and drink there was. About a microphone which stood in the middle, through which anyone could speak and make proposals, which were then voted on by a show of hands. I talked about the beginnings of Citizenship and predicted that hope for Greece existed within that movement.

Four years later, Alexis Tsipras, the man who emerged as a leader from that movement, stood in the same square in front of a million people, this time as Prime Minister, and made a speech filled with both generosity and defiance. He stood alone, with no security, no fear, nothing between him and the crowd, other than a white shirt, unbuttoned at the collar. “Democracy is life”, he said. “Democracy is strength and joy.” The crowd went wild. You can trace a direct line from events in the summer of 2011 to today.

The juxtaposition with the “yes” campaign could not be clearer. TV spot after TV spot of grey men in grey suits and grey ties behind grey desks, photo references of some glorious past scattered behind them, warning us that they’re going to take our salaries, our savings, our houses; they’re going to ruin us. The same people who forced the country to its knees, begging it to lay down with its face on the ground and stop resisting or things may get even worse. A smaller crowd holding newly purchased, crisply ironed, Greek and EU flags and banners – funded by whom, I wonder? – trying to work up some passion.

They couldn’t. Because they know they’re wrong.  They hide behind excuses about not understanding the question. Everyone understands the question: Is Greece going to be governed by elected representatives or appointed representatives? I have not spoken to a single person planning to vote “yes” who doesn’t know they’re about to do the wrong thing. They just think they’re being practical. Maybe they are. Maybe, in the end, they will secure a numeric victory. It doesn’t matter. Whatever the result, “OXI” has won.

Just as in Scotland, the actual result is at once earth-shattering and completely irrelevant. Because something much more profound has occurred: People have begun to look at the world around them; really look. Everyone, whichever way they plan to vote, is thinking about the issues and talking about the issues. Compare that to the complete apathy and hubris of ten years ago.

Just like Scotland, what Greece has experienced is a process of political awakening. Ears which prick up and listen critically. Eyes which open and see straight. It is a process that is irreversible, irrevocable and irresistible. The Emperor is naked. I suspect Merkel, Cameron, Renzi, Rajoy (especially, Rajoy) know this. They are on borrowed time. They have single-handedly created a popular but progressive branch of Euroscepticism, overnight. They must reform or perish. “OXI” has won.

It doesn’t matter what the numbers show when the polls close tonight. If “yes” wins, we go to elections. The Greek people will return Tsipras and a Syriza government with an even bigger majority. If a technocratic government is appointed, it will approve yet another loan on top of the unrepayable ones which already exist (will you be tweeting me in two years time, I wonder, saying “you accepted the money willingly, now pay it back”?) Then we go to elections and Syriza will win by a landslide. “OXI” has won.

For the first time in many years, I feel proud to be Greek again. Not in a narrow, romantic, backward looking, nationalistic way. Not in the sense of thinking we are somehow better than others. But in a practical, present sense of thinking “we are on our way to being better than we are”. Isn’t that something? Isn’t it everything?

“OXI” has already won. Today, tomorrow, in ten years. Let us count the votes and see how soon.

Please contact us at info@byline.com if you have any queries about us or our journalists.