The Greek Crisis Will Pass; Our Humanity is What Matters 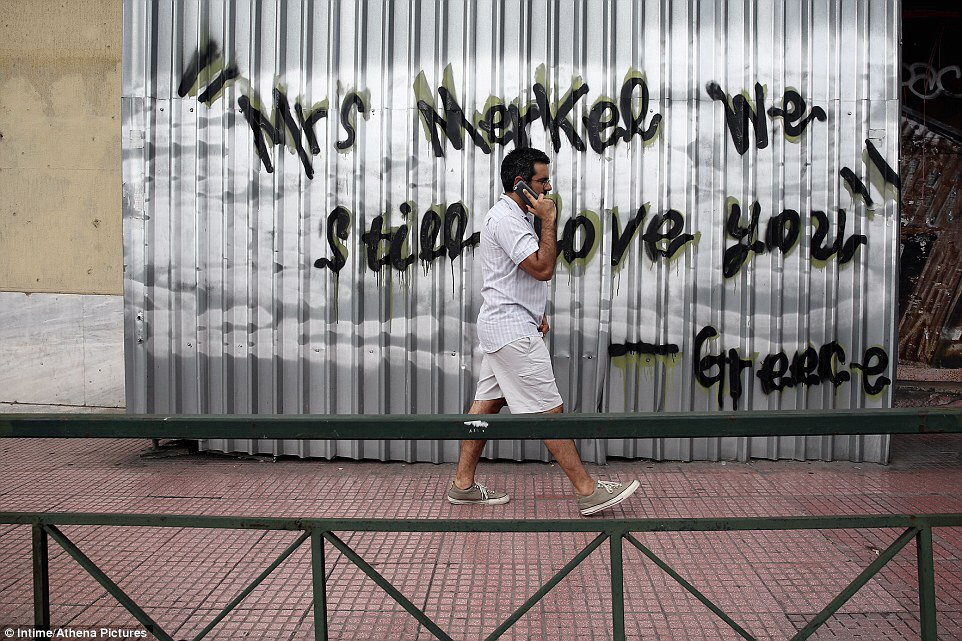 I could have written this letter to many people, or to nobody in particular. I chose to write to you because your messages to me were particularly aggressive, but also representative of an attitude that I have seen a lot in the last few days, weeks and months. I also chose to write to you because I sensed that, under all that bristling aggression, you are a kind and fair person. Maybe, in the quiet of your own home, away from the white noise of social media, you will listen.

“Why should German tax payers pay for Greece’s spending?” That was your central question, condensed and paraphrased a little. I don’t think it is an unfair question. I do, however, think it is framed in unfair terms.

To start with, let us acknowledge three things. First, our politicians lie to us on a regular basis. The lies they tell us, I will come back to, but let us agree the basic premise. Second, the media distort facts. You must have observed in your country, on issues which concern you and on which you are knowledgeable, that media reports are sometimes twisted, incomplete, simplifying and often have a clear agenda. Please accept that they do the same when they talk about Greece.

This is why I write to you directly. To try and cut out the distorting lens of carefully chosen photos and headlines; of “line to take” and political stigma, of politicians’ statements and posturing for votes.

The third and final thing is this: We are more alike than we are different. We both want the freedom and quiet to enjoy life, before it is snatched away from us. We both want the dignity of working for a fair wage, of standing on our own two feet. We both want security for the people we love, access to health, to shelter, to a roof over our heads and a meal on the table. Our humanity connects us in way that is absolute, timeless and goes beyond borders. It is a connection which is affirmed every time I travel to your beautiful country and interact with its warm, funny people.

I don’t want to go into the origins of the crisis. Many things have been written about it. If you are open and well-informed, you will already have an idea that all was not as clear-cut as it is now painted. If you are interested, please read my back catalogue, both here and on other publications. I have been writing about it for years.

It is incontrovertible fact that very little of the bailout money went to Greek people. Most of it went to shore up banks; some say French and German banks, others say banks to which European finance companies were heavily exposed. I have strong opinions on whether that was right or wrong, as I am sure you do. It really isn’t important any more. It’s not like it can be undone. Suffice it to say that when the crisis hit Greece, Europe was vulnerable to contagion and on the brink of a deep depression. And now it isn’t as much.

You must accept, then, that what that initial money bought was time. I disagree with how it did it, but it did. It bought time and pulled Europe back from the brink of financial ruin. Not just for my benefit. Not just for Greece. But for all of us.

I suspect you also know that the running of most states includes a redistributive element. Again, we may argue and disagree on the extent of that redistribution or the size of the state or the extent of its involvement, but it is a fact of modern democracy. I want you to understand, then, that asking “Why should German taxpayers pay for Greece’s spending?”, in the context of a European Union of friends, allies and partners, is no different to saying “why are West Berlin taxpayers paying for buses in East Berlin?” or “why are rich German taxpayers paying for the health needs of middle-class German disabled children?”.

Greek people did some things wrong, but we are trying to fix them. We really are, and at an unbearably heavy cost. Someone said to me yesterday “you have implemented some austerity for a couple of years; stop whining”. That is a stunning misconception of the truth. My country has been decimated. We implemented precisely what we were told and the results were disastrous. Different people have different interpretations of what the motives behind insisting on austerity were or why it didn’t work. There is, however, pretty much universal agreement that it didn’t.

I cringe at people bringing up the war. I think it is monstrous and inhuman to throw shame and guilt at a fellow European for mistakes of the past. I would never hold you responsible for the actions of leaders in your history. Please, extend to me that same courtesy.

A large sum of money was taken from taxpayers in yours and other countries while the debt Greece owes has gotten bigger, not smaller, while austerity was implemented to devastating effect. How is that possible? How did we all get much poorer, suddenly? Where did that money go? I certainly don’t have it. Do you? The answer may rest within “rich lists” published yearly in most countries. Rich people seem to be getting much richer. Both you and I are getting poorer.

Our leaders, collectively, fucked up. That is the truth. Someone from Bulgaria tweeted me the other day, asking why I am complaining and saying that average salaries in Bulgaria are even lower than Greece. Someone from Germany emailed me a chart showing that Germans work, on average, four more hours a week than Greeks. Putting questions aside of the Bulgarian cost of living being much cheaper and the work-life balance in Germany being terrible, the simple truth is this: if we keep arguing with each other, soon we will all be working German hours for Bulgarian salaries.

The question is how do we go forward, sensibly and with love? The debt with which our leaders saddled Greece is unsustainable. I don’t say that. The IMF, who is one of Greece’s biggest creditors, say that. People ask why Greece won’t pay its debts, as if we can. We can’t. What is more, the IMF says, we never could and never will be able to.

It is an option to punish Greece for that. To keep applying measures which mean things get worse and worse. It is irrational, but maybe gratifyingly cruel. I have seen a lot of “suck it up” reactions to what I write. It is the equivalent of taking away all the machinery, worth one thousand Euros, from a factory that owes you a million Euros, and which is part of the same consortium as your business. It pretty much guarantees that you will never get any of your money back; your consortium will suffer additional losses; innocent workers lose their jobs; everyone suffers maximum damage.

A more sensible option, I think, is to accept that the previous plan failed, instead of pointing fingers, and come up with a sensible, definitive, clear plan going forward, which allows Greece to breathe, stand up on its feet, grow, regroup, rethink, reform, eventually pay back some of the debt and become a contributing member to the “consortium” again.

Because life, Margarethe, hasn’t stopped being unpredictable or cruel or warm or beautiful or inevitable, just because the crisis hit. We still find ourselves diagnosed with cancer, falling in love, having to look after elderly parents who forget our names, getting pregnant, having toothaches, caring for friends, becoming depressed, having accidents and writing plays. We just find ourselves with no money to do any of it.

Despite what current coverage would have you believe, we don’t want you to pay for any of those things. There is nothing we want more than to be able to pay for those things ourselves. We just need the breathing space to do it.

It seems fashionable to blame the poor for their predicament. I’m sure you have noticed it within domestic politics in your country. I’m sure you question it. Why then subscribe to that world view when it comes to European affairs?

Now, it may be that, in light of current events, you no longer want to be allies, friends and partners with me. Again, I understand that point of view and I respect it. But let us be clear about what it will mean. It will mean that we belong to a sort of alliance which leaves the weakest behind; a sort of partnership that cuts you loose during bad times; a sort of friendship that is superficial and brittle. It won’t  just mean that for me, Margarethe. It will mean that for you, too; for everyone in the Union. And it won’t just mean it in some abstract, international, faceless way; but in practice, in both our politics and our lives.

It will mean we subscribe to the philosophy of division, blame and scorn, in which one life matters more than another; the philosophy that tore our continent apart all too regularly and all too recently. It means that we have learnt nothing.

Let us learn and make things better, not worse. How about it?

With love, respect and friendship,