The Pantomime of The Greek Deal 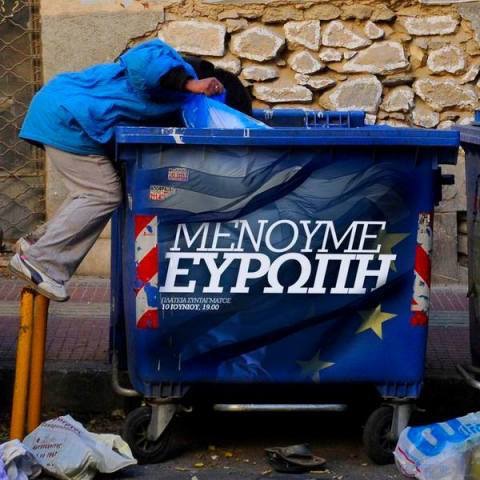 This is my initial reaction to the deal proposal by Greece: it is more austerity -harsh austerity at that – and many of the measures are recessionary. Distribution of the burden seems to me fairer than before. If the upside is access to a significant stimulus package (front-loaded), a smoothing of the measures (back-loaded) and substantial restructuring of debt, to make it definitively viable, it will probably be seen as worth it. It is certainly capable of being sold as worth it.

Essentially, everyone managing to keep their position/perks/income in the context of an economy which is in the middle of a death spiral, is meaningless. If the economy begins to recover, then things which were unbearable, become bearable. Austerity becomes a background noise, rather than a preoccupation and a progressive government will be able to offset the damage. It is a delicate balance.

Market confidence is a strange creature. There is a lot of money sloshing around at the moment, taken out of China which is in free-fall. Money which is bulging to be invested. All it takes is an intangible notion that Greece has hit the low point, for investment to return. Whether this package achieves that balance or not, will have to be assessed over time, as the detail of each measure becomes known and away from the adrenaline and hysteria of negotiation fever.

Instant, dramatic, pantomime reactions of the type “Tsipras just destroyed Greece” and “Tsipras just saved Europe” are numerous and deeply unhelpful. He has done neither. This isn’t a booing or cheering moment. He simply has tried to balance his two basic mandate commands to a. end austerity and b. stay within the Euro, which turned out to be pretty much mutually exclusive, in an ideologically propagated, German-controlled climate. As that became clear, one had to be prioritised over the other. It is fair to say that a shrewder assessment at the start may have revealed them to be mutually exclusive, but shoulda-coulda-wouldas are also not particularly constructive.

To be clear, I am not saying that the deal is done and dusted. The pattern of events so far has been that EU agreement is dangled in front of Greece, then withdrawn at the last minute and more concessions demanded. But the proposal seems to me designed, ultimately, to be impossible to refuse, so that if it is refused, it causes the rift between France/Italy/US and Germany with its allies to surface clearly. It is, as someone put it, the perfect “sealed envelope bid”.

For what it’s worth, I think this might achieve a deal. Neither the Greek Parliament, nor the EU Institutions or assorted leaders will have the nerve to refuse, I think. Nobody wants to go down in history as the person who broke up the EU – which is a remote, but reasonably foreseeable scenario in the event of no deal.

I am ambivalent. I currently occupy the strange grey area of moving between Europhilia and Euroscepticism, on different issues, in different directions and at different speeds. I will have to clear this up internally, as everyone else must. It is clear that the Euro has failed (for the reasons it was always going to fail) and will continue to fail in various ways for several countries. I used to think this could be fixed. I used to think “just get on with fiscal union”. But Germany’s autocratic behaviour has put me off completely.

I now think, firmly, Greece would be better off outside the Euro, absorbing the pain of default, then constructing its own recovery. I thought so back in 2010. Around 2013, I started to think “well we’ve gone through so much austerity pain, people’s investment in the project is huge, we might as well see if we can salvage the currency”. I no longer think that. Anything is better than being a debt colony.

Sadly, there is not enough political will or public appetite for that. So, the Eurozone will either continue to merge by osmosis, into a series of German protectorates, or stumble from crisis to crisis until it implodes. Although, I do sense that, perceptibly, public opinion in Greece and abroad is beginning to shift.

I am certainly not in the camp who think Tsipras is a coward for not taking Greece out of the Euro, even though I agree it is the right thing to do. It would also be deeply undemocratic and hugely divisive; civil-war-level divisive. Pronouncements about how brave it would have been to make that decision, from people not in a position to make that decision, are cheap and easy. The confused camp which condemned Tsipras for not making a deal two weeks ago, then voted OXI at the referendum and, now, condemns Tsipras for trying to make a deal is large – probably the majority.

I would not want any leader to make a decision expressly against their democratic mandate. We have been betrayed enough by our politicians in that way. I guess, my long term best case scenario would be Tsipras to make the deal, then start planning for an orderly and controlled Grexit and start working on convincing people that it is the right choice. My second best case scenario is Germany digging in its heels and refusing the deal. Painful, violent, but ultimately freeing Greece from bondage to pursue default.

I wrote in January that after decades of the wrong people succeeding from the wrong reasons, Greece was yearning for the right people to fail for the right reasons. I believe this is what has happened. I do not, for a moment, doubt this government’s honesty or integrity and that is an important step forward, psychologically. I believe they have done the best that anyone could have, with honesty and – yes, at times – wide eyed naïveté. I do not envy their task in the weeks and months to come, whatever it turns out to be, and I intend to fully support them in it.

I also wrote, in January, that even if the Syriza dream ends in compromise, what it will achieve is to bring unsavoury operators, who like to keep their arm-twisting and blackmail confined to the chalets of Davos, out into the open. One must know who the enemy is, in order to fight the enemy. Syriza has achieved that. Now, it is over to you, Spain. Take what we’ve learned and apply it wisely.

Note from Byline: Alex Andreou is crowdfunding his ongoing coverage of the Greek Crisis. Please consider contributing a few pounds through the link on the right of the page.

Journalists retain all copyright of their work and so it can be reprinted elsewhere, but always and only with permission. Please contact us at info@byline.com if you have any queries about us or our journalists.