The Greek Election for Dummies 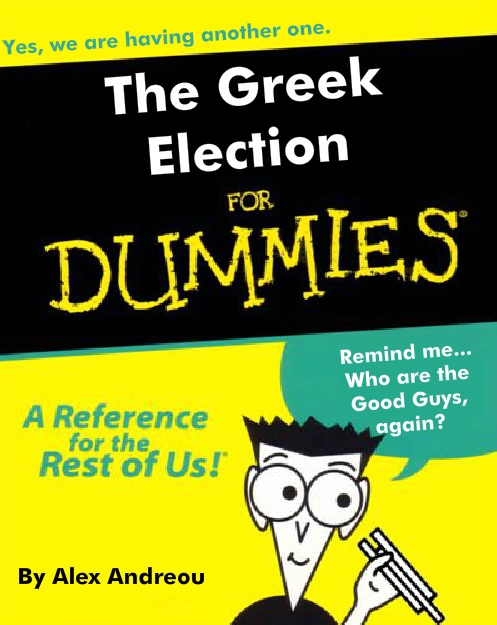 This is a very short summary of what you need to know to understand the Greek election. The electoral system, the parties, the people, the latest polls.

My opinion editorial on the election can be found here, in English and here, in Greek.

I have set up a live blog which will transmit news throughout the evening and night. Please share it in social media.

What to expect and when

At 6pm Greek time (4pm GMT), coverage of the election result begins on most networks and on my live blog. At 7pm (5pm GMT) the exit poll is announced. Around 9:30pm (7:30pm) the first nationwide projection, based on 10% of the results, is expected. As you will see below, the electoral system means that how marginal, smaller parties do, affects the overall results profoundly and, since there are likely to be a few such small parties, the clear result may not be apparent until the early hours of the morning.

There are 300 hundred seats in all. 50 of them are given to the winning party as a “top up bonus” in order to help it form a government. The other 250 are proportionally distributed using both a regional and national “list” system which each party submits. BUT…

There is a cut-off point. Smaller parties which fail to achieve a minimum of 3% nationwide do not get any seats. Their combined “waste” is distributed proportionally among the larger entrants. This means that the number of parties which “make it” into Parliament, affects the share of the vote needed by the winning party to achieve an absolute majority. The chart below, by Macroppolis, is helpful. 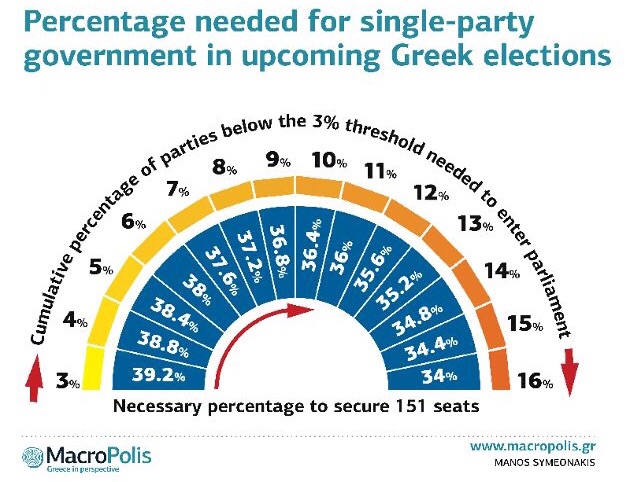 This is partly academic, as no party is expected to achieve absolute majority on this occasion, but will affect how many are needed to form a coalition.

The Major Parties and Their Leaders

SYRIZA: The leading party of the last coalition government. Leftist but pro-European, it started out as a coalition of left wing protest parties. It is led by the dominant personality of Alexis Tsipras, who signed the third bail-out agreement. This led to accusations of betraying the Greek electorate and a faction on the left of his parliamentary group (Left Platform) breaking away to form their own party and forcing this election. The counter-narrative is that Tsipras negotiated as hard as possible and achieved the best agreement achievable, given the power balance in Europe.

NEA DEMOCRATIA (ND): Or New Democracy is Greece’s main right-wing neoliberal party (which includes some far right populist elements). Vehemently pro-market and pro-European, they have governed Greece for most of the last 40 years and are seen as carrying the bulk of responsibility for the corruption and excess which exacerbated the financial crisis. Their leader Vangelis Meimarakis was meant to be only a care-taker after the resignation of former PM Antonis Samaras, but found himself leading the party into battle when the snap election was called.

ANEL: Or Independent Greeks was the minor coalition partner of SYRIZA for the last eight months. A right-wing populist party, big on religion, defence etc. with disturbing nationalist overtones, it surprised many by behaving fairly professionally and loyally as a coalition partner. Their leader, Panos Kammenos, is an exceptional media operator, and has a bit of a “bromance” going on with Tsipras. They are struggling to re-establish themselves as a distinct proposition and polls show they may struggle to reach the 3% threshold.

GOLDEN DAWN: Greece’s far-right fascist party. Makes the BNP look like the Von Trapp family. Strong racist and neonazi flavour. The majority of its parliamentary team is sub-judice for criminal activity ranging from running a criminal organisation to murder. Their leader Nikolas Mihaloliakos, this week, admitted “political responsibility” for the murder of anti-fascist musician Pavlos Fyssas – a watershed moment in Greece. This has led to accusations that they are trying to gift-wrap votes for New Democracy.

POPULAR UNITY (LAE): The newly formed party, born from the faction that left SYRIZA, causing its parliamentary majority to collapse. Their leader, Panayiotis Lafazanis, is uncharismatic and preachy, but they do include powerful personalities like former Speaker of the House Soe Konstantopoulou. They are campaigning on a platform of exiting the Euro unless their demand to end austerity is met. An unknown quantity, their poll % has been dropping, but they are expected to meet the 3% threshold.

PASOK: Formerly the second big beast of Greece’s bipartisan system, PASOK governed the country alternately with New Democracy for 40 years. They were the minor coalition partner with their traditional rival in the last government and were punished, their vote collapsing from 40% in 2010 to 4% in January. Have rallied slightly under the leadership of Fofi Genimmata, the only woman leader of a major party, especially since she subsumed DIMAR (Democratic Left) and their former leader Papandreou wound up his KINIMA party, due to lack of funds.

POTAMI: A relatively new party, led by journalist Stavros Theodorakis, POTAMI has a centrist identity and has only existed for a couple of years. It has been accused of being a construct of big media interests served as a replacement for collapsing PASOK and that it contains no ideological compass. Their response is broadly that ideology is irrelevant and that they are the party of practical solutions. Media friendly, but often superficial. Did well in the European Elections last year, but have flagged since. Expected to be a minor coalition partner, whoever is elected.

KKE: Greece’s Communist party; consistent Marxist-Leninist platform, advocates withdrawal from Europe, nationalisation of banks and mutualisation of all means of production. Old-fashioned, but clear, stuff. Has a solid hard core of voters, but never does well-enough to be in a position of any real influence. Its leader, Dimitris Koutsoumpas, is straight-forward and clear. The party has never participated in any austerity vote. Probably the only part of Greek politics that is largely unchanged by the crisis.

ENOSI KENTROON (EK): Or the Union of Centrists is led by media personality Vassilis Leventis – described by some as strangely endearing and others as just strange. More a personality cult than a party, it is doing well in the polls (around 3.5%) but is predicted by some to drop beneath the 3% threshold as opinion polarises around the bigger players.

Polls are notoriously unreliable in Greece and often get it wrong en masse. They are seen by many more as aspirational statements of what each media outlet would like to happen, than predictions based on hard fact.

Having said all this, there are certain trends which all the polls converge on. It will be a relatively close result, between SYRIZA and ND for first place, but neither is expected to achieve an outright majority. Most of the polls show SYRIZA very narrowly ahead, with a couple of outliers at each end showing either ND narrowly ahead or SYRIZA commanding a more substantial lead.

GOLDEN DAWN is predicted by most to be the third largest party, without making any significant advance on its position last time. PASOK, POTAMI, KKE and LAE are expected to get in with seats ranging from single to double digits. ANEL and EK are marginal, they may meet the threshold, they may not. ANEL traditionally does better than the polling suggests and the opposite is true of EK.

Undecided and abstaining voters will play a pivotal role. ND is showing very high percentages (80%+) of compacting of its vote – i.e. the people who vote for it traditionally already intend to vote for it again. SYRIZA is showing middling percentages of compacting (60%+). This means that SYRIZA has more potential to do better than predicted on the day, if its former voters make a last-minute decision to support it. A higher-than-expected turnout, therefore, is expected to help Tsipras.

Follow my live blog, for updates throughout this evening and night.