The people of Greece confirm Tsipras 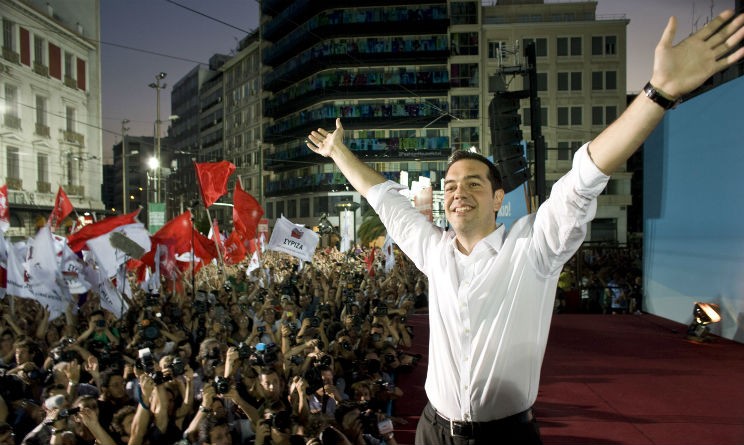 It seems to be turning into a clear pattern for the people of Greece to defy opinion polls. After constant predictions of a neck-and-neck race, some polls even putting the conservative New Democracy slightly ahead, Alexis Tsipras and the leftist party SYRIZA triumphed last night, winning by a clear margin of 7.5% from his closest rival.

Having been forced to sign an onerous third bail-out, having seen his party lose dozens of MPs who defected and formed their own party LAE, having suffered an astonishing and sustained attack from European interests and Greek private media, Tsipras found himself with just four fewer MPs. 145 instead of 149 (151 is a majority). It is a remarkable political achievement, by any measure.

The dominant parties of Old Greece, New Democracy and a slightly revitalised PASOK, who had spent the entire campaign period declaring that they would do a deal with anyone and that an ecumenical government of the broadest coalition is the only way forward, ruled themselves out minutes after the final exit poll confirmed Tsipras’s victory. It seems an ecumenical government was only a good idea if they could dictate the terms.

His partners Independent Greeks or ANEL, lost three MPs. The two have announced their intention to proceed with their coalition as it was before the election. Some question his decision to opt for ANEL again as coalition partners. The have a right-wing populist flavour. Defence and religion feature prominently in their campaign.

In truth, however, ANEL were the pleasant surprise of the last eight months. They proved themselves to be more moderate than expected, more professional that predicted, aware of their relatively small size in the coalition and, most important of all, fiercely loyal to the coalition. When your own comrades attack you in your most crucial hour of need, you appreciate those who stood by you, regardless of their political stripes.

It is for this disloyalty that I believe newly formed Popular Unity or LAE – the rebels from SYRIZA who left to form their own anti-austerity party – were severely punished, not even making the prerequisite 3% which would allow them to have any MPs. I predicted this would happen the day after they announced they would be standing against Tsipras, at a time when polls were giving them 7%.

When I said that LAE wouldn’t even make it into the new Parliament and many commentators mocked me; “But they have 25-30 of the most prominent former SYRIZA MPs”, they said. “They express the people who voted OXI at the referendum.” That analysis failed to understand Greek attitudes. When your fellow soldier comes back from battle, having fought hard, having lost, having been wounded, you do not kick them when they are down. Disloyalty is not an admired quality in Greece. That sort of opportunism is almost invariably punished at the polls.

“Will 155 MPs be enough?”, asked an ERT journalist of Tsipras. “Maybe they will multiply”, answered the newly re-elected Prime Minister, cryptically. Was he hinting at possibly extending collaboration deals to parties outside the coalition? Or hinting at possible defections from other parties? Or just joking. We will know soon.

Many are worried about fascist Golden Dawn remaining as third biggest party and making gains, but in truth those gains were marginal. Golden Dawn emerged as third party in January, not because of any significant push forward of its own, but because of the collapse of PASOK from 40% in 2010 to 4%. They had 18 MPs in the Parliament of 2012, 17 in January, and 18 again. They are static. And in an environment in which SYRIZA, the main party of protest, is now party of government and Greece is the centre of the biggest refugee wave since World War II, static is very good news.

Right-wing pundits have chosen to accentuate the low turn-out (around 55% which is normal for many European countries, but low for Greece) to take the sheen of his victory. But that abstention is a factor of many variables. Disillusionment is certainly a factor. But voter fatigue also played a major role – this was the fourth time people were asked to go to the polls in just over a year. The fact that these elections were called in such a short timeframe would have also influenced turnout. There was no chance to register to vote outside your constituency, and many would have to travel a long way to their polling station – thousands from abroad.

What next for Tsipras, then? The last eight months have been the most intensive training period, possibly, in any politician’s life. He will emerge wiser, tougher and more decisive. He has learned much about the power balances in Europe and this will serve him well in the negotiations on restructuring the debt coming up this autumn. His experience of disloyalty within his party will ensure he makes wiser choices when constituting his cabinet. In many ways, LAE will become a cautionary tale, useful in disciplining other rebellious MPs, at least for a while. “See what happened to the last people who attacked him?” party whips will be able to say.

Most of his rival parties will go into a period of introspection and internal strife. New Democracy has to elect a new leader soon – Meimarakis was only a caretaker. The leader of centrist media construct POTAMI, Stavros Theodorakis, having lost ground instead of making gains, has already announced a post-mortem. Fofi Genimmata, leader of PASOK has done well, but is a very weak media performer and old grandees within her own party have been gunning for her all along. Golden Dawn have a criminal trial ahead and their leader Mihaloliakos has just accepted “political responsibility” for the murder of anti-fascist musician Pavlos Fyssas.

In Europe, too, balances are shifting. This victory will boost Iglesias of Podemos in Spain, the newly elected Labour leader Corbyn in the UK, as well as all left movements across the EU. It might encourage Hollande and Renzi, who have already been making noises of discontent against German hegemony, to further rebellion. The leader of Germany’s Linke shared a stage with Tsipras during his last political rally. The party of Jeroen Dijsselbloem – head of the Eurogroup, Schauble’s right hand, and one of Tsipras’s bitterest political “blockers” in Europe – seems to be in deep trouble in the upcoming Dutch elections. An anti-austerity pan-European movement is forming at the political level and it is beginning to gather real momentum.

Tsipras has a golden opportunity now. With his stock high and his opposition in tatters, he can forge ahead with a programme based on a fairer distribution. He can prove that the left is not just words, but can govern a country pragmatically and shrewdly for the good of the many.

The death throes of the old establishment, of big media, corruption and clientelism will be violent and the birth pangs of a new social democracy equally painful. The next year will probably be the most difficult Greece has experienced recently. But if he manages to restructure our country’s debt, reform the public sector and attract investment, I think Greece could start to grow very soon and grow very quickly.

A shiny new socialist PM is, in many ways, vulnerable. A battle-hardened, scuffed, scratched, battered, second-hand one, can do so much more. Tsipras stands at the threshold of history. He may well prove to be Greece’s most significant political figure of the 21st century.