Are The Terrorist Attacks in Brussels ‘Fair Game’ for The Brexit Camp?

“Brussels, de facto capital of the EU, is also the jihadist capital of Europe. And the Remainers dare to say we’re safer in the EU! #Brexit”, tweeted Telegraph columnist Allison Pearson, as smoke was still billowing from Zaventem Airport, a mere twenty minutes after the first bomb blast was reported and before the attack on the metro had taken place. She was retweeted by Nigel Farage, leader of the UK Independence Party and a prominent figure of the Brexit campaign.

Others followed suit, including the Ukip defence spokesman, Mike Hookem, issuing a statement minutes after the attacks, which claimed that “Schengen free movement and lax border controls are a threat to our security”. The flurry of political point-scoring was wrapped up by the (now almost de rigeur) incendiary Katie Hopkins tweet: “Merkel – and her ilk – blew up Brussels. #brexit”

Membership of the European Union is a thorny issue, and one with which I have grappled repeatedly. Events in Greece since 2010 have meant I am light years away from the committed Europhile I was twenty years ago. It is clear that the Euro currency has developed into an increasingly cruel and failed experiment. It is clear that the European Union must be reformed, root and branch, if it is to retain its usefulness to its citizens. It is clear that Europe is under attack from extremist groups and faces an increasing home-grown radicalisation problem, too.

Seeing exit as a magical silver bullet, however, which will instantly solve problems which are ingrained and endemic to developed nations, is folly. The corporatisation, inequality, polarisation, corruption, nepotism, privilege and neoliberal dogma that are wrecking the EU, are even more deeply embedded within the British political system. Root and branch reform are essential at every level of our politics. Fragmentation arguably makes nations even more susceptible to the whims of large corporations and international markets.

It is an even more dangerous folly to extend such thinking to matters of security. Perhaps, in the light of recent atrocities, the Schengen agreement does need to be reviewed. However, the UK is not part of it. It is still in complete control of its borders. Smuggled undocumented migrants on trucks, would be just as smuggled whether in or out of the EU. The idea that people can just walk through British borders by virtue of Schengen is cynically misleading.

The notion that a country would be safe from terrorism by isolating itself from the world is dangerous fantasy. It is as if the bombings in the London Underground, perpetrated by home-grown radicals with British passports, never happened. It is as if Ankara, New York, Oslo and San Bernardino were safe from such violence by virtue of their lack of EU membership.

If anything, it is the involvement of a handful of nations in wars in the Middle East and Africa which exposes Europe – all of Europe – to terrorism. The merit of such involvement is a separate and long conversation. It is a warped reaction, within minutes of a European partner and NATO ally coming under attack, to scream “CUT THEM LOOSE”. It is inappropriate, undignified, and strategically naive. More than that, such gutless disloyalty flies in the face of any notion of “British values”, of which Brexit fans claim to be guardians.

The Brexit camp was wrong to seize on these attacks in order to boost their own agenda. They were wrong by any measure of fact and wrong too by any measure of ordinary decency. And if you’re still unsure, consider this simple thought experiment: What would the reaction of those very same Brexit ‘patriots’ have been, if minutes after the 7/7 London bombings, with the dead still being pulled from the wreckage, an advocate for Scottish independence suggested that it would be safer for Scotland outside the UK because England is incompetent at guarding its borders?

It was a strategically misconceived move, too. Both for their narrow aim of Brexit and for their wider aim of stopping terrorism (which I will take charitably at face value, for the purposes of this piece, despite significant misgivings).

There was barely concealed glee in the messages of people like Katie Hopkins. Never mind the dead and the bleeding; I-told-you-so triumphalism was the only sentiment on display. There is little doubt that underneath the Brexit campaign lies a substratum of far-right-wing nationalism and xenophobia. These dog whistles feed and embolden that element, for sure. The noise generated may feel like headway to Brexit advocates.

But for the majority of the Brexit camp, comprised of decent people who honestly believe the UK will be better off outside the EU, such blithe disregard for human life will be a giant turn-off. And for people like me, who were trying to make up their mind, a clincher for “remain”. I will not share a platform with such people and such methods – not on any issue.

As to the wider aim of stopping terrorism, it is useful to try and look at things from the opponents’ viewpoint. Daesh have shown themselves to be sophisticated publicists, making full use of social media, viral videos and recruitment websites. What do you think keeps their propagandists awake at night? A united, resolute, rational, determined Europe or a fragmented Europe plagued by suspicion, doubt and self-recrimination? It isn’t a trick question.

Hate feeds hate. Extremist organisations could not wish for a better recruiter than Hopkins or Farage. They rely on young Muslims feeling as if they are hated indiscriminately; feeling as if they are already at war. They thrive within a “them versus us” narrative. There can be no greater inducement to yet another terrorist attack than this display of divisiveness. “Their institutions are creaking; their loyalty is brittle; look, they are already at each others throats”, they must think. “One more bomb and they will unravel.”

Once the goal of the attackers is rationally investigated, how one should behave becomes very straightforward. The aim of terrorism has always been clear: to spread discord, panic, suspicion, division, anger, irascibility. So, one must simply ask: In the aftermath of such a tragedy, in this moment of human vulnerability, does what I have to say resist or further that aim? 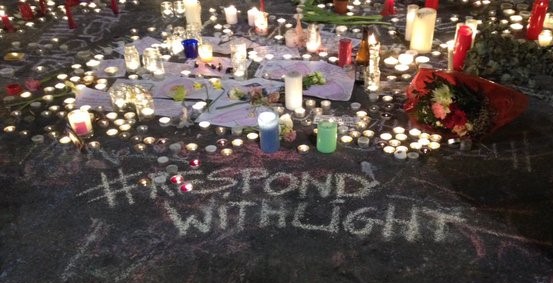