The Independent. In the End, it Wasn’t. What Next? 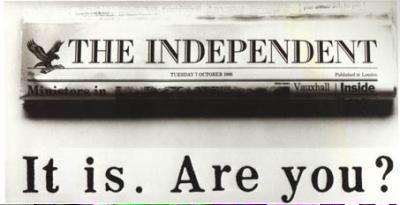 This year’s Academy Awards for best picture and best screenplay went to the film Spotlight. Its subject matter was the uncomfortable truth of widespread and systemic child abuse carried out by Roman Catholic priests that had been exposed by committed, investigative journalists on the Boston Globe, backed, crucially, by a committed and fearless editor.

In the same awards season, another film, with no Hollywood stars and no significant production values on show, captured the spirit of what many regard as British journalism’s finest hour. Attacking the Devil laid out the detail of the Sunday Times’ lengthy campaign to uncover the truth about the thalidomide drug. The documentary was essentially a war story, with the paper’s legendary editor, Harold Evans, showing that when journalism’s great battles are analysed, he emerges as one of its finest generals.

The overwhelmingly positive response to both films shows that we still have a deep visceral response to efforts which expose lies, half-lies and any institutional structure which attempts to cover-up or massage the truth.

In Evans’ memoir of his time at the helm of Sunday Times, ‘My Paper Chase’, he singles out the colleagues he valued most as those who are “scholars in scepticism.” That is the shared DNA of these two films. And our applause is loud because it’s much easier to see where you’re going in the dark if someone provides a torch.

Elements of the fallout from Sir Brian Leveson’s inquiry and his recommendations for press reform, have been attacked as a threat to the future of open and investigative journalism in Britain. “Chilling” control, proposals for a royal charter described as “medieval”, an autocratic, draconian threat to liberty: the message is that unless all Leveson-related laws are buried or cremated in a symbolic pyre in Parliament Square, then there will no more Insight or Spotlight teams , no more stories exposing the next Philby or the latest Profumo, no more MPs expenses scandals, no Fifa cash-for-votes exposes, and perhaps no more offshore tax evasion scandals.

Mike Harris, the chief executive of the freedom-of-speech group, 89up, and author of the “Leveson’s Illiberal Legacy” report, wrote in the Daily Telegraph last year, warning of Putin-style, state-imposed, press regulation and said Britain’s proud 300-year tradition of press freedom was under threat.

Despite the dark prophesy, Harris wrote : “All is not lost. There are friends of free speech in the Cabinet, including John Whittingdale, the Culture Secretary.”

The irony is breathtaking.

The Whittingdale story that Byline carries today should have already been read when it appeared on the front page of The Independent months ago. That was always the objective of those involved – from senior editors to news editors, to those journalists who asked questions, and to the journalists in other papers who answered them.

Harris wrote : “All is not lost. There are friends of free speech in the Cabinet, including John Whittingdale, the Culture Secretary.”

It would have far better had there been no Whittingdale cover-up to report. Other newspapers had the public interest justification to run this – and each, for their own reasons, opted not to.

In The Independent’s case, there was an understandable commercial pressure. But rather than be reduced to a tenant that had effectively become a client-state of the Mail, those in charge should have looked at the masthead, read the word “Independent”, and asked what Evans or Martin Baron, the former editor of the Boston Globe, now editor of the Washington Post, would have done? Sadly, that didn’t happen. And with the closure of The Independent, there is no second shot at redemption.