The selective blindness of “lefties” who support Brexit

“How can you, as a leftie, support remaining in the EU?” It is a question I am asked with increasing frequency by fellow progressives who support Vote Leave, and it is one over which I have genuinely agonised.

Let me start with a free admission: There is no doubt that the EU has been captured by neoliberal* interests. As a Greek, I have experienced first-hand the combined brutality of imposed privatisation, liberalisation and austerity. “How can you, as a Greek, support the UK staying in the EU” is a common permutation of the more general question. The short answer is: because I have made a rational assessment of what the world looks like post-Brexit.

I will put aside schools of thought which yearn for violent revolution or anarchy, for the moment. I do not dismiss them. I am just honest about the fact that, both politically and psychologically, I find I prefer solutions which do not involve bringing about the maximum amount of trauma.

That isn’t to say that those who say “the EU is part of the establishment, therefore by striking a potentially fatal blow to the EU, we wound the establishment” do not have an intellectually honest point. They might. But experience has taught me that “the establishment”, however one chooses to define it, has a profound capacity to plan for shock and usually has a plan B.

Therefore, I am still left in the position of trying to divine what the world looks like post-Brexit.

It is precisely by looking at that post-Brexit world, that I can say with absolute confidence, both as a Greek and as a leftie, that I find a vote for the UK to remain in the EU to be the only rational choice. In order to explain why, it is interesting to look at an attitude I find fairly typical within the leftie Brexit camp, or Lexit, as it has come to be known.

I questioned a supporter of Lexit as to what the objective was. His reply was: “1. Leave neoliberal institution of EU. 2. Elect democratic socialist Govt. £. Inspire others 4 Form community of like-minded”. 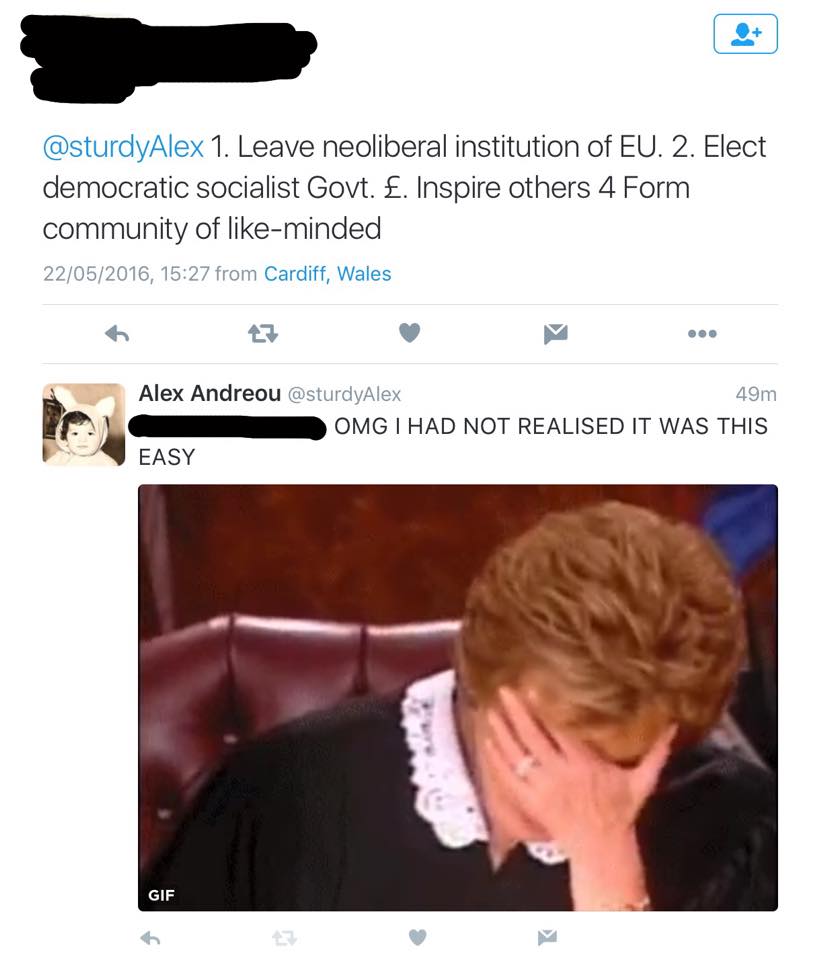 My immediate observation, looking at that list is that it is the wrong way around.

Surely, in a democracy, one must start from forming a community of like-minded individuals, which then inspires others, builds momentum, elects a a socialist government, which then takes on the EU’s current warped manifestation. So why the strange reversal of aims? I venture to say it is because the left in the UK has failed miserably at 2, £ and 4 in the last two elections – and, arguably, much longer than that.

This position then becomes a sort of irrascible transference of electoral frustration; a bad-tempered reaction to being defeated by “conventionality” which drives one to strike at anything conventional, just because they can. But it is based on three fundamental misconceptions:

A DENIAL OF THE PRESENT

The EU does not have a de facto character. It is simply the aggregation of member states’ political character and it can take this shade or that depending on prevailing circumstances. The EU which in the late 90s delivered unprecedented workers’ protections, human rights legislation, and pressed for gender equality and product safety – to name but a few areas – is definitively and patently not a “neoliberal institution”.

The blithe scapegoating of the European Union for every ill, by every government of a member state for decades, with the help of a crude media, has facilitated a notion of “Brussels” as a sort of Cthulu-like dark entity emanating malevolence. But that is a red herring, and a dangerous one at that, since it masks the precarious position in which progressive politics finds itself and enables denial.

The truth is that most of Europe – indeed, most of the world – is going through a profound crisis of values. The seismic shock of the global financial crisis not only caused the plaster to fall on our heads, but more importantly exposed fatal, unfixable, structural flaws in the underlying structure.

The reaction to this failure of capitalism, for the most part, has been the imposition of a panicked, ill-thought-out, turbo-charged neoliberal austerity. In other words, we have responded to a system failing, with more of the same system. This has had a deeply negative effect  on the credibility of centre-left, centrist and centre-right politics, who had all long embraced free-market dogma.

It is fantasy to suggest that, at this moment of capitalism hyper-ventilating and lashing out at every single level of government, all one needs to do is fillet a random level away and what will be left will be a socialist utopia. You only need to look at the progress made in Switzerland and Norway by the far right, not to mention Trump’s emergence in the US, to realise that this shift to the right is a western phenomenon – not an EU one.

AN UNREALISTIC VIEW OF THE FUTURE

Then we come to the idea that by pushing the eject button, we will land somewhere soft and socialist. This, too, is nonsense. It reminds me of certain unions, unhappy with Callaghan, advising their members to vote for Thatcher whose overreach they were certain would topple capitalism.

Economically, there can be no doubt that Brexit (or Lexit – you can call it something different, but the result is precisely the same), will have grave implications. Short-term the result for the UK is almost certainly recession. I believe current estimates, branded “pessimistic” by the Vote Leave campaign, are actually very optimistic, because nobody seems to be taking into account the wider effect.

First, the EU will not be an inert or passive body post-Brexit. It is a powerful economic bloc, right at our doorstep, who will now be a competitor, and whose only chance of survival – in order to preempt a possible exit-stampede – is to fight the UK with all its might. Being able to point to the UK’s exit and say “look at the disaster that was” is the EU’s only viable strategy. Underestimating this is willful blindness.

Second, the Eurozone itself is still in a middle of a crisis and anything that destabilises it, could plunge it further down a precipice on which it has been teetering for five years. This will have global implications. Not only will we antagonise our closest trading partner, but we risk bringing about a second peak to a global crisis which is still very much rumbling under the surface. This will have a double recessionary effect, entirely of our own making.

The notion that this – magically, somehow; nobody has offered details of how – will lead to the election of a “democratic socialist government” is fanciful. It will, as surely as B follows A, bring about more fear, more austerity and – by inevitable extension – more misery for the poorest and the most vulnerable. As a socialist, I cannot ignore that in favour of a fiction. Politics is not a sport.

The idea of “Lexit” in and of itself is quite telling. It is an attempt to say “we want the same result as those far-right people, but not for the same reasons”. Implicit within that is a cynical acknowledgment: None could argue that UK’s exit from the EU will not be seen broadly as a victory for the right and far right. The same far right that is gaining ground all across the Western world; the same far right that just lost an election in Austria by 0.6%. This will inevitably buoy them. It will be used as a template for the ultra right around the world. Saying “I know this will happen, but it’s not what I want” is neither here nor there.

I can find no rational support for the argument that the UK – especially the UK – will be the historical counter-example to this rule. I cannot find any rational way of seeing a situation where we leave the working class of this country at the mercy of Boris Johnson and Nigel Farage – having wilfully stripped away hard-earned layers of protection for human rights, for working conditions, for equality, for consumer protection – as anything other than a giant regressive step.

This is where the UK is so different to Greece. Greece’s politics are, on average, to the left of the EU aggregate. This is why, as a Greek, I did support a controlled exit from the single currency. It was clear to me that Greece wanted to go in a socialist direction. Its departure would have a much smaller effect on the cohesion of the total. In effect, Greece had achieved “2, £ and 4”.

The exact opposite is true of the UK. Its politics are, on average, to the right of the EU. The EU has historically worked as a brake on UK governments wanting to spin in a rightward direction. This cannot be ignored or supplanted by a fantasy.

ROW WHILE YOU PRAY

We are at a point in time when the possibility of Trump in the US, Johnson in the UK, LePen in France, Putin in Russia and Islamist fundamentalists controlling large parts of the Middle East and Africa is a possibility. I hope it is unlikely, but it is undeniably possible.

Referenda, much like online petitions, have a way of becoming political wish-fulfilment; a projection of our wider desire for instant gratification, a capitalist notion itself. Many across the political spectrum and both sides of this debate are guilty of it. Battling slowly towards a better world is hard work. We just want to tick a box and get it; the political equivalent of “click and collect”. There is an old Greek saying: Pray for the Gods to get you to shore, but row while you do it.

With circumstances as they are, nationally and globally, actively opting for a choice which destabilises Europe and strengthens the far right is nothing short of destructive. Doing so in exchange for the vague promise of magical socialism, when in fact the campaign is being spearheaded by the right wing of the right wing, seems to me downright daft.

Start from “2, £ and 4”. Make the case for progressive politics. Build coalitions across borders. Socialism is an internationalist movement for a reason. There is strength in unity and weakness in division. If we all do that in our communities and our countries, the character of the European Union will start to change again.

The EU is a progressive project; it is our project. Let us not abandon it or withdraw from it, leaving it to the mercy of the interests which have captured it and hope it goes away. Let us not concede that we lost the war, withdraw to our castle and call it a victory. Let us react to the cracks in our house by fixing it; not by setting it on fire and locking ourselves in our bedroom.

* I know “neoliberal” is an umbrella term to which many object, but I find that the vast majority of people understand it accurately as a useful summary of a set of socially conservative and economically free-market attitudes, turbo-charged by Thatcher and Reagan.