A few days ago, Nigel Farage was caught telling an absolute porkie. Here it is: link

“When the boss of Europol says there are up to 5,000 jihadis who have come to Europe in the last 18 months, posing as migrants through the Greek islands, I believe him.” He repeated this on BBC’s Daily Politics verbatim that same day. Just in case there was any confusion.

Only the boss of Europol never said that. Ever. “But he did say that” scream a thousand kippers, citing a Daily Mail report. Only, he really did not. If only we had precisely what he said on video. Oh wait, we do here

He talked about “5,000 European nationals” who had been “radicalised by conflict experience in Syria and Iraq”. Nothing about eighteen months, nothing about posing as migrants, nothing about Greek islands. These are people with European passports. And – guess what – a big proportion of them are British. Which makes attaching this point to a Brexit argument patently ludicrous.

Still, the Brexit-kipper-drones actually insist that it’s all just a matter of interpretation. If only the actual boss of Europol could step into the debate and clarify. Oh wait, he did. 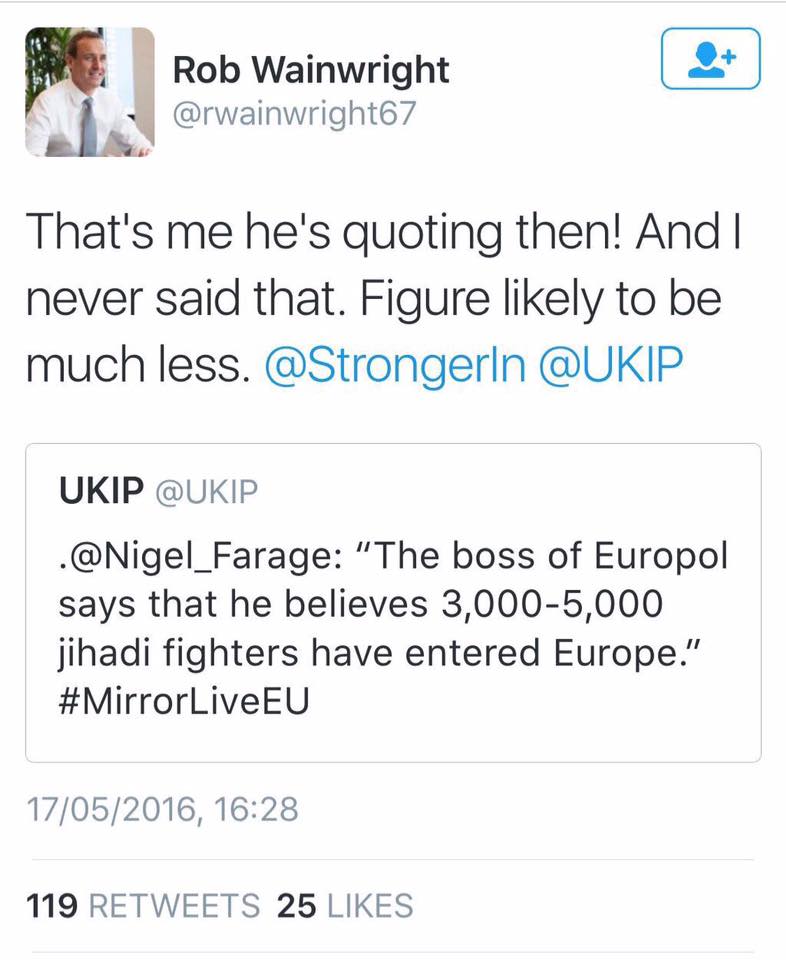 And STILL, believe it or not, the Farangelists are in denial. Because, as one said to me: “Farage and boss of euro pol both said non mutually exclusive statements.” So, in Brexitland, as long as a statement is not “mutually exclusive” to what someone said, it can be actually attributed to them as a quote! *bangs head on desk*

If only the head of Europol had been asked in that same press conference specifically on the number of people to which Farage was referring and had responded they were “a few isolated cases” and expressly said there was no precise figure. Oh, wait. He did: here

The Brexit camp keep repeating things like this which they know to be absolutely untrue (see also their “£350m per week” figure, thoroughly debunked by every source and described by the IFS as “absurd”). Facts simply don’t support their position and, so, have to be made up. This is revealing. Despite their democracy-warrior rhetoric, despite their constant complaints about propaganda, they are quite happy to try and manipulate voters with lies. Which is the essence of propaganda.

I shall continue to observe the xenophobic right wing’s nervous breakdown with interest.