The Biggest Lie of The Vote Leave Campaign

She was (depressingly predictably) greeted by cries of “traitor”, “turncoat”, “bitch” and “whore” from dozens of Brexit supporters, who seem to believe that democracy and freedom of speech only apply as long as one agrees with them; a worrying and sadly pervasive trend among the nationalist folds at the heart of the Vote Leave campaign.

Perhaps more shocking, however, is that her decision was also questioned by prominent figures in the Leave campaign – like Times columnist Tim Montgomerie – who claimed that the facts haven’t changed and so her change of mind is irrational. A second, but related, contingent – see, for instance, Patrick O’Flynn MEP’s tweet – suggests that, in the face of huge objections regarding the EU, defecting over what they describe as “one stat” is suspicious.

Wollaston explained her decision very clearly on her personal blog. Central to her reasoning is the thoroughly discredited “we pay the EU £350m every week” claim. This is the “one stat” which Brexiters claim should carry no weight. Wollaston, however, quite rightly points out that the Vote Leave campaign “have knowingly placed a financial lie at the heart of their campaign, even emblazoning it on their battle bus alongside the NHS branding to imply a financial bonanza.”

Despite Vote Leave’s protestations of surprise, Sarah Wollaston’s change of heart is anything but. She has been protesting that campaign’s “flexible” approach to the truth for months. Saying they must “stop treating the public like fools”. As recently as two weeks ago she refused to distribute literature which contained that figure. Nobody seemed to be listening.

This provides an extraordinary glimpse into the mindset of their campaign and reveals the biggest lie at the core of it. It is a lie carefully propagated by a side which has little evidence and few experts on its side. It is a cynical attempt to create enough noise, so that real facts get lost. The biggest Brexit lie is their claim that “yes, we lie a little, but everybody is just as much of a liar”.

Because this isn’t lying a little. This is lying a lot.

The UK statistical authority has explicitly told them that using that figure is misleading. The Institute of Fiscal Studies has described the figure as absurd, explaining that in order to reach it you would have to assume that the UK left the EU and stopped making any payments to its budget, but that EU members continued to pay the rebate to the UK.

More than that, their entire campaign is based on this figure – and fictitious accounts of how they would spend it, over and over again. There is not a speech, not a television broadcast or inteview, not a leaflet that does not mention it. It is emblazoned on every poster and on the side of every battle bus.

I know Farangelists will point to this or that Remain figure, but there is nothing, absolutely nothing on the Remain side, that has been discredited so thoroughly and is used so often. Nothing that comes even close to this level of cynical deception, in size, scope, or persistence.

Far from being an isolated case, it is part of an entire plexus of directly provable lies. This blog alone has pointed out how Brexit’s orchestrated letter from “300 business leaders” is nothing more than a sham. How the “5,000 jihadis” quote attributed to the boss of Europol is pure mendacity, proven by video evidence and directly contradicted by its very source. Nigel Farage repeated it as a quote, only two days ago during his ITV Q&A.

The catalogue could stretch over volumes. That Turkey is to join the EU imminently, when there is no credible chance of it. That prisoners are a threat to the public, when they are actually incarcerated. That women are in danger of being raped by Syrian refugees. That the EU is preventing us from selling bananas in bunches of more than three. That the 1969 Vienna Convention guarantees the residency of British people living on the Continent, when it does no such thing. That Britain is being attacked by a giant arrow of vaguely Iraqi origin. 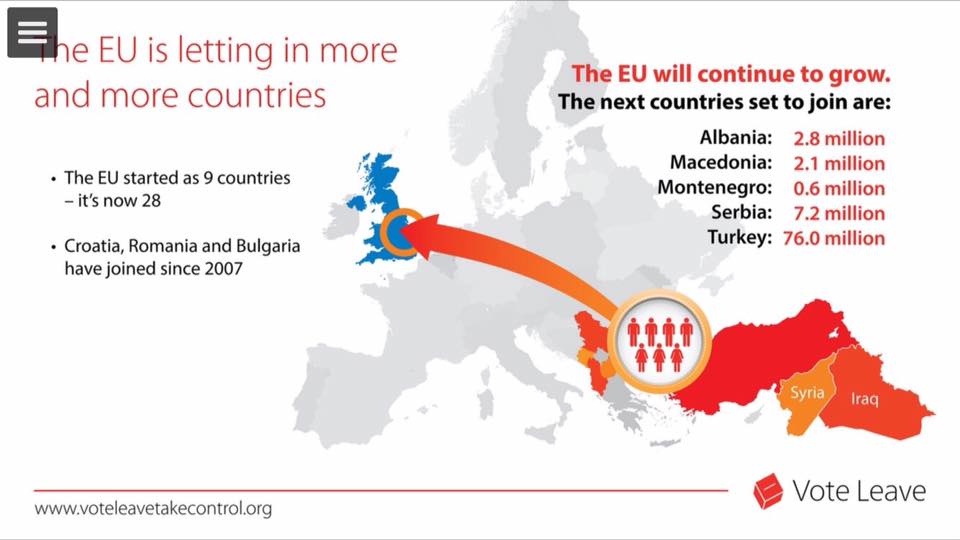 This is a campaign built on lies. Not little inconsequential exaggerations. Not political puff. Not disputable statistics. But out-and-out, bare-faced lies, specifically engineered to mislead, confuse and inflame. If there are legitimate arguments of democracy and sovereignty to be made for Brexit, choosing to defraud the public of their vote directly negates them.

And so, to people like Tim Montgomerie and Patrick O’Flynn, I say: When lies have been pointed out to and yet continue to be used, when a decision has been made that you have lost on the facts and cynically elect to drown them out with medacity, when it is deemed acceptable to try and win by deceiving the electorate, then facts have changed and the minds of anyone who cares about the truth must change accordingly. The only real question is why haven’t you changed yours?