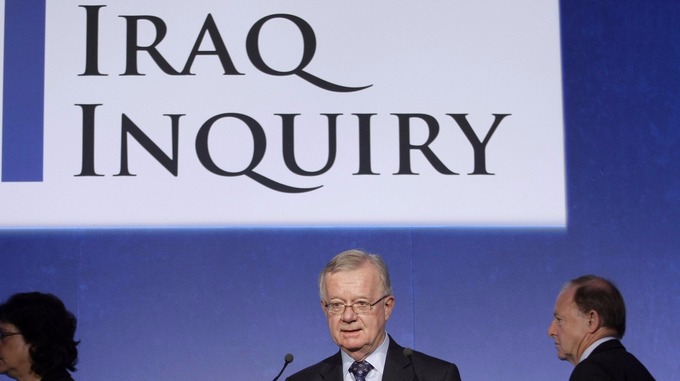 The tangled web of deceit that Tony Blair spun to take Britain to war in Iraq alongside the United States finally unravelled in the way America’s greatest president forecast any political half-truths would.

Blair attempted to dispense with examining intelligence evidence and an exhaustive effort to broker peace, and instead replaced them with a public relations exercise

Abraham Lincoln’s maxim, that you cannot fool all the people all the time, was the clear and unequivocal thread that ran through the thousands of pages of the long-awaited Iraq Inquiry report.

In the former, and now officially discredited, prime minister’s own words, contained in one of his numerous private notes to George Bush, he knew people would “baulk” at the course of action he was planning to take with the US president.

* He knew unjustified military action would increase the threat from Al Qaida to the UK and elsewhere.

* He must have known how inadequate the plans, both the UK and the US’s, were for post-invasion Iraq.

* And according to Sir John Chilcot, the diplomatic and strategic reality, that “military action at that time [in 2003] was not a last resort”, exposed Blair’s years of insistence that he believed he was left with no other option than doing what he believed was “the right thing.”

The 2.6 million words of the Report of the Iraq Inquiry (RII) amount to a demolition case of war as a marketing exercise.

Blair attempted to dispense with examining intelligence evidence and an exhaustive effort to broker peace, and instead replaced them with a public relations exercise in manipulation that involved duplicity against his own ministers, Cabinet, MPs in the House of Commons and many in the wider international community.

Again, using Blair’s own words, Sir John Chilcot’s hard-hitting report exposes the lack of any sustained determination to avoid war, and finds a joint US-UK plan to deliver a “clever strategy” designed to replace Saddam Hussein in Iraq regardless of the cost of the exercise.

Blair tried to sell the idea that he was keeping the United Nations in play, forcing the Bush administration to stick to international law.

Chilcot, laying out the evidence gathered in seven years of forensic analysis, concludes the very opposite of what Blair was saying – that the UK was in fact “undermining” the authority of the UN Security Council.

Though Chilcot marches to the cliff-edge of branding Blair a liar, he holds back.

How much weight did the legal green-light for war eventually delivered by the Attorney General, Lord Goldmith, actually have?

In chapter-upon-chapter of dissection, which looked at Goldsmith’s changes and redrafts, Chilcot concludes “the circumstances in which it was decided that there was a legal basis for UK military action were far from satisfactory”.

According to the report, Blair put pressure on Goldsmith, and then armed with what he wanted, pressured the Commons on the “severity and potential threat from Iraq’s WMD (weapons of mass destruction)”.

Though Chilcot marches to the cliff-edge of branding Blair a liar, he holds back.

However there is little doubt about what is really being said. What parliament was told about Saddam’s military capabilities in September 2002, “was presented with a certainty that was not justified” – in other words, Blair misled the House of Commons, offering supposed hard-edged evidence that disguised a weaker reality.

The proclaimed certainty that Blair sold the Commons, masked deficiencies in the information coming from the Joint Intelligence Committee (JIC).

There was no “beyond doubt” intelligence that Saddam was producing chemical and biological weapons or that he was on course in efforts to develop a nuclear capability.

In marketing strategy you mask weaknesses and big-up efforts to focus on the positive. The report says that the JIC had made the call that as long as sanctions against Iraq remained effective, Iraq’s nuclear ambitions would be thwarted; they were also years away from developing or deploying long range missiles.

Parliament should have been given these caveats, the truth, and nothing but the truth.

Parliament Deceived with an ‘Ornament of Fear’

MPs however were told of the “real and present danger to Britain and its national security” and that Saddam’s arsenal could not be contained and posed a danger to the security of the UK.

Britain’s military policy was being based on flawed intelligence, not intelligence being discussed and analysed in private, but a public exercise designed increase fear and allow the playing of any hand the way Blair and Number 10 saw fit.

Parliament was being deceived with an ornament of fear; the information it was being given was tainted and deliberately corrupted to fit a still hidden agenda.

In the run-in to the conflict, from 9-11 onwards, throughout 2002 and 2003, briefings from Downing Street and from key Blair aides, continually offered reassurance of the prime minister’s motives. Blair was at George Bush’s side, and on his side, because that was the sole way to check the military ambitions of the neo-cons in the Bush administration. At Bush’s side meant Blair retained the power to influence and shape – at least that was the public explanation.

But according to Chilcot:

“Blair over-estimated his ability to influence US decisions on Iraq”. If there was a “special relationship” between the UK and the US, Blair saw his duty as one always there to offer “unconditional support”.

Chilcot see the actual relationship with Washington as operating in a different way, one far more robust.

The report says “The UK’s relationship with the US has proved strong over time to bear the weight of honest disagreement. It does not require unconditional support where our interests or judgement differ.”

However unconditional support was exactly what Blair has been exposed as offering.

On July 28, 2002, ONLY few months after the two leaders had held a face-to-face meeting at Bush’s ranch in Crawford, Texas, Blair wrote to Bush with an assurance that he would be with him “whatever”. The promise is stark, without condition, and is not the only such offer he made.

Among the lessons the Iraq Inquiry.. the importance of collective ministerial discussion

Chilcot’s report is openly hostile to Blair’s decision to apparently abandon the collective responsibility of cabinet government, to dispense with ministerial discussion, and to dismiss note-taking and administrative record-keeping.

The report identifies a number of occasions when “policy should have been considered by a Cabinet committee and discussed by Cabinet itself.”

Blair, in effect, had carved out a dictatorial role, and, left unchallenged, saw dealing with Bush as his domain alone. Blair was the election-winning figure that reshaped Labour into New Labour – the project and the party were his alone. Down the line this dominance resulted in one of the key flaws exposed by Chilcot’s investigations.

The note sent to Bush that began “I will be with you, whatever” went on to state that he believed the US “could do it alone, with UK support” [remove Saddam from Iraq.]

In the note Blair told Bush that “evidence” on WMD was still needed, as was Saddam’s attempts to “secure nuclear capability” and “add on the Al Qaida link”. He said Arab support was essential, and that support in Arab/Muslim world could be divided.

Blair’s effort here, according to Jonathan Powell, Blair’s chief of staff in Downing Street, was centred on “seeking a partnership with President Bush.”

Powell told the inquiry that this note was “an important one”.

Although Powell said that being “with” the Americans didn’t mean “going to war”, alarm bells went off for Sir David Manning, Blair’s foreign policy adviser, when he read the July note.

The report states that it was Blair himself that drafted the note. Manning immediately wanted the word “whatever” removed because it was “too sweeping” and “closed off options” and “wasn’t a sensible place to be.”

Manning and Powell went to Blair’s flat inside Number 10, with Manning requesting the first sentence to be removed. Manning thought there was a risk the word “whatever” would be taken at face value – going further than the UK needed to go.

According to Manning, Blair listened – but refused his appeal. The word “whatever” stayed, with Manning accepting what had a clearly been an established pattern. He said “The Prime Minister had strong views about things. He was absolutely open to debate, but on a lot of things, if he’d made up his mind, he’d made up his mind.”

Among the lessons the Iraq Inquiry states now needs to be learned is the “importance of collective ministerial discussion which encourages frank and informed debate and challenge.”

The conclusion, clear but not spelled out, is that Iraq was Blair’s war. The key unconditional decisions to fall in line with what George W Bush wanted, were Blair’s. The failure, the ignored warnings, and the catastrophic consequences that have followed, therefore lie with a British prime minister who decided to do prosecute war his way, on his terms.

As the report states, the 2003 war in Iraq, was the first time since the Second World War, that the UK took part in an invasion and a full scale occupation of a sovereign state.

The decisions that shaped this war, costing the lives of potentially half a million Iraqis, mostly civilians, along with 4,500 US and 179 UK military personnel, were taken by George Bush and his close advisers, and on this side of the Atlantic, by Tony Blair.

Blair has regularly washed his hands on Iraq, saying he is innocent, need not apologise, and merely did what he thought right. That no longer sounds convincing – if it ever did.