Malmö is a port city, the capital of Sweden’s Skåne county, and the third largest population centre in the country. The wharf faces the Øresund, where a bridge spans the waters separating it from Denmark. In many ways it has the look and feel of Liverpool or Hull, with a population of 350,000 sitting somewhere in between both.

As Nils Karlsson, the Deputy Mayor, pointed out to me, Malmö has undergone a huge transformation in its economy, shifting from industry to biotech, IT, and the creative sectors. A key driver in this change of once declining fortunes appears to have been a combination of the Øresund Bridge itself and the foundation of the University of Malmö in 1998. 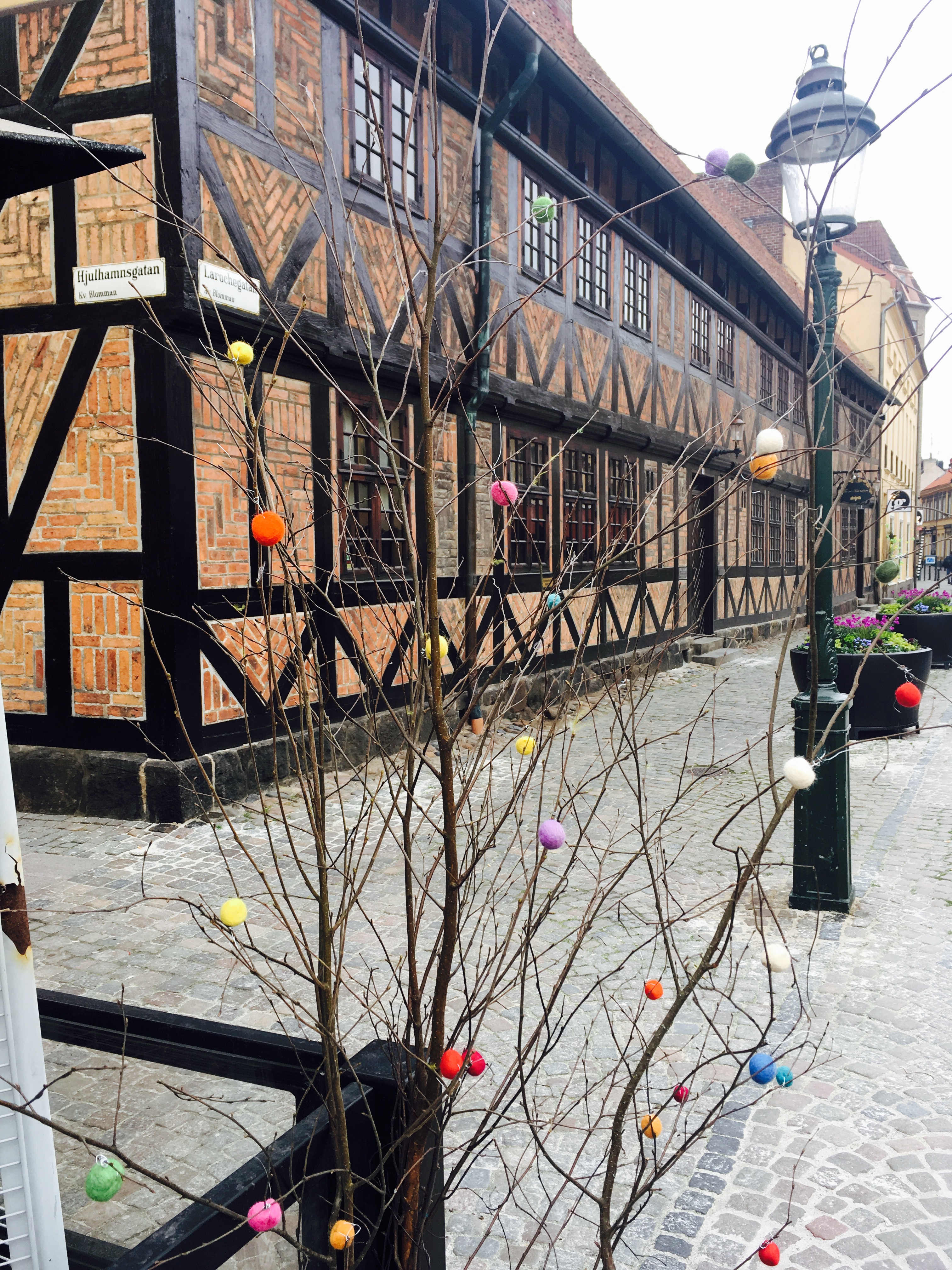 Sitting in the independent Coffee House, baking in the sun which shines through a huge window onto Stortorget, the historic city square, I can imagine Malmö as quite bleak during the winter. Stepping outside you really feel the last bites of the chill, even despite low daylight washing the colour out of the streets. On the bustling Lilla Torg, the restaurants provide blankets at every table.

Having arrived early in the morning by train, which took only twenty minutes from Copenhagen airport, I’d noticed a prominence of darker skin tones on the near empty streets as Malmö’s immigrant communities made their way to work. But, by the time I’ve interviewed Karlsson, at the Stadhuset, and criminologist Manne Gerell back at the Central Station, white Swedish faces dominate everywhere.

“White, Swedish males appear much more likely to openly ogle women, in particular if they are wearing skirts”

Two observations leap out at me immediately. White, Swedish males appear much more likely to openly ogle women, in particular if they are wearing skirts, and the same demographic are prone to spitting or blowing their nostrils out onto the street. I don’t see anyone else doing the same, watching keenly as I wander. The spitting is not linked to the country’s consumption of snus – snuff – according to hundreds of online articles claiming it’s saliva free, but I see plenty of empty packets (like small teabags) littering the floor which indicate this may not be true.

In terms of misogyny, the Swedes are heavily involved in advancing gender equality, with most political parties representing the issue, and women make up 45% of the political representatives in the Swedish Parliament. The country has a permanent role of Minister for Gender Equality and the government allocates money specifically to advancing the balance in the annual budget – in 2014 they allocated 252 million Krona. Still, the wandering eyes are bothersome. It seems to me, at a glance, there’s an apparent societal issue which these political moves have not yet addressed.

Meandering up and down the side streets I’m approached by a beggar. The man, a heavyset African, blind in one eye, approaches me and I feel a little apprehensive but he politely switches from Swedish to English and asks for a cigarette. I can’t oblige as I have none but he wishes me a friendly good day with a smile. The same polite approach plays out several times, with a Middle Eastern woman sat quietly between some bicycles, and a few native Swedish men and women huddled in blankets on the bridges which cross the canal to the wharf. I can’t imagine being homeless in the bitter nights here, so I offload what change I have in Krona.

“I can’t imagine being homeless in the bitter nights here”

Aside from the spitting and ogling, everything in Malmö appears otherwise civilised and clean. Maintenance crews are everywhere tidying and repairing, and the air doesn’t smell of anything – something which hits me harder when I get back to England.

Everywhere I look there are signs of settled immigration and integration. There are no Starbucks, but Espresso House shops are everywhere, along with many kebab shops – oddly German in their influence. The worst immigration I see in the central shopping area is a bizarre English shop selling tat and I can’t fathom what it’s doing there. Nothing is really empty or boarded up and the streets are free from what we Brits now call ‘Chavs’. What I’m seeing is people living, working, and interacting together in peace. Kensington High Street looks grubby and dangerous by comparison.

At the foot of the monument in Stortorget lie flowers, burned candles, and a stuffed toy. A few metres away is a simple sign declaring “Malmö loves Stockholm”. These are the very real signs of unity in the wake of a terror attack only days earlier and, almost spontaneously, a crowd gathers in a minute of silence for the victims.

It is clear commercialisation hasn’t had the same effect here as it has in Britain, with our carbon copy high streets all looking much the same now. The obvious marker is Starbuck’s absence, but the brightly coloured feathers and pom-pom’s adorning the trees and windows denote an Easter free from eggs at three for £5. I like it, the visual of a tradition untainted by economy.

Off the main streets very little changes. Everything is still clean and I don’t feel that pressing sense of alertness I’ve gotten used to living with in most places in England. An orderly queue catches my eye at one branch of the Försäkringskassan – for all intents and purposes the benefits office. The line is almost a fifty-fifty split of white Swedish faces and darker Middle Eastern ones.

The feeling I get is I’m in a balanced, integrated, clean and civilised city centre. So far everything is reflecting Karlsson’s account of Malmö as a beautiful, welcoming city. Speaking to him and Gerell about crime though, I know I need to look East of the centre. To Rosengård. That’s where the truth lives, I’ve no doubt.

“a balanced, integrated, clean and civilised city centre. So far everything is reflecting Karlsson’s account of Malmö as a beautiful, welcoming city”

The Rosengård district of Eastern Malmö, literally translated as Rose Manor, had a population of around 23,500 in 2012, making up only 7.6% of the city’s total population.

With the exception of a couple of specific areas, most of the district was built between 1967 and the early seventies – when the immigrant population was around 18%. The construction effort was a substantial investment in affordable housing by the government, the largest project of its kind in the world at the time. The aim of the Miljonprogrammet was to build one million homes in a country of eight million people and make sure everyone had access to them. Over the years, assignment of housing has increased the population of residents with an immigrant background to 86% in the area.

Inevitably, there have been racial tensions and in 2008 there was serious rioting – though nothing like on the scale of 2011’s London riots, which spread across the UK and lasted five days. The violence in Malmö, which was centred on Rosengård, lasted two nights and saw extensive fire damage to vehicles and bicycle sheds. It began when a building owner refused to renew the lease on a space which was rented and used by the Islamic Culture Association.

Initially, angry youths who used the centre occupied the basement and refused to leave but after several weeks an eviction took place and a broader demonstration involving anti-fascism protesters, some of whom travelled in from outside Malmö, turned violent.

The riot was quelled when two-hundred Malmö residents, organised by the Islamic Culture Association, mediated with the rioters and brought the events to an end.

“Inevitably, there have been racial tensions and in 2008 there was serious rioting – though nothing like on the scale of 2011’s London riots”

Three years before the riots, Rosengård was the location for a film – “Without Borders – A Film About Sports And Integration” – which was hailed at the time as a documentary about the successful integration of immigrants into Swedish society. Featured in the film was a young Swedish-Syrian, Osama Krayem, who went on to be one of the perpetrators of the 2016 Brussels Bombings.

Aged eleven during the filming, it is believed Krayem was radicalised online during his early twenties and left Sweden in 2014 to fight with ISIS in Syria against the Assad regime. By his return to Europe in 2015, Krayem was using a false Syrian passport in the name of Naim Al Hamed and resided in Belgium until the attack. His DNA was also found in the apartments used by the assailants in the Paris terror attacks of November 2015. During questioning, Krayem told terror police he had refused to detonate his suicide bomb in Brussels and expressed regret.

Krayem is not evidence of a particular problem in Rosengård, nor indeed Sweden, but this story does highlight how extreme a change the radicalisation process can create in young people, wherever they are from and however it is done.

The same year as the Paris attacks another young Swede, Anton Lundin Pettersson, attacked Kronan School in Trollhättan, armed with a sword. He killed a teaching assistant and a male student, then stabbed another male student and a teacher. The second teacher died in hospital six weeks later. The deadliest recorded attack on a school in Swedish history, the police investigation concluded the assailant was motivated by racism and had chosen his target due to its location in a neighbourhood with a high immigrant population. CCTV footage showed Pettersson sparing the lives of students with white skin.

Pettersson had visited right-wing extremist groups at social media sites supporting Adolf Hitler and joined a group on Facebook wanting to stop immigration to Sweden. He had also supported a petition by the Sweden Democrats to initiate a referendum on immigration. He left a handwritten note at his home declaring something had to be done about immigration and stating he did not expect to survive his spree. He was killed during apprehension.

I look at these two stories of young Swedish men, both radicalised online, and see no difference.

“this story does highlight how extreme a change the radicalisation process can create in young people, wherever they are from”

In terms of Rosengård I can’t help but wonder how much influence the closure of the cultural centre in 2008 had on community relations, given the circumstances, and to what degree it created an opportunity for radical extremists to exploit the disaffected youths.

On top of all of this there are the socioeconomic concerns – which both Karlsson and Gerell raised – to consider. I briefly look up the figures and find less than 40% of Rosengård’s population is employed and only 60% complete elementary school. The latter feeds the former of course, given the skilled nature of Malmö’s technical economy.

It’s only ten minutes from the city centre to Rosengård on the number 5 bus, so I buy a return ticket and head there to find out how bad things are for myself…