Lesotho: Leave.EU’s Diamond In The Rough

Parsons Jewellers in Bristol had been in the same family for generations when it hit trouble. It was eventually bought by the man behind Leave.EU and Westmonster and in his autobiography Banks outlined his desire to turn the outfit into a brand.

Banks sources his gems from a series of mines he owns in South Africa, under the company name Kophia Diamonds, and is listed as a director alongside Jonathan Ian Banks and James Pryor.

Jonathan has a law firm registered to Banks’ primary offices in Bristol, and Pryor – ex-UKIP and Maggie Thatcher communications guru – is linked to another Banks connected company, Chartwell Political.

While there is no website for the mining operation, Pryor’s email address is listed as the contact address for any queries. Arron Banks is further linked to the region by lobbying and mining companies unearthed in the Panama Papers.

On the 25th of January 2015, ahead of Lesotho’s last election, Leave.EU’s Andy Wigmore and James Pryor were both present in the country, “burning the midnight election oil.” 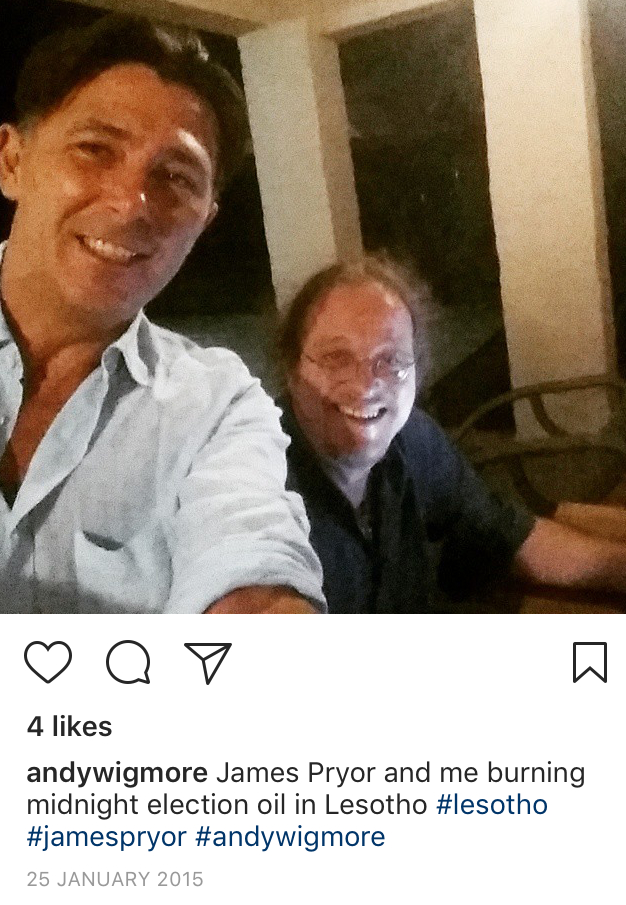 At least one of Banks’ mining operations is located in Lesotho, where early general elections are to be held in June 2017 following a no-confidence vote in the incumbent prime minister, who has led in coalition after a military coup caused the 2012 election to fail and a snap election to be held in 2015. The political landscape is clearly complex.

Mr Wigmore and Mr Banks have been asked how the coming election could affect the mining interests in Lesotho. As yet there has been no reply.

While there is no indication as to what involvement they had in the election campaign beyond the photograph, Wigmore, along with both Arron and Jonathan Banks, and James Pryor are pictured with the King of Lesotho on the 11th of June 2014 during an apparent trip to visit their mining facilities. (No stranger to celebrity, Wigmore can also be found pictured in the infamous gold lift at Trump Tower.)

Banks, in his autobiography, describes Pryor as his “fixer in Africa” and states that both Pryor and Wigmore worked together for the conservatives in the late 1980s. Banks goes on to say that he bought two mines in Lesotho, visits them periodically, but Pryor is there most of the time to keep him updated.

Mr Wigmore and Mr Banks have been asked what connections they have with the king but have not yet replied.

As previously highlighted in the #snowman investigation and in Guardian articles, Banks is shown in the Panama Papers as the director African Strategic Consulting Ltd (“lobbying”), African Strategic Resources Ltd (“mining”), and African Strategic Capital Ltd (“wealth management”). There is no indication of illegality in this structure.

Mr Wigmore and Mr Banks have been asked what lobbying, if any, the consulting group does. As yet there has been no reply. 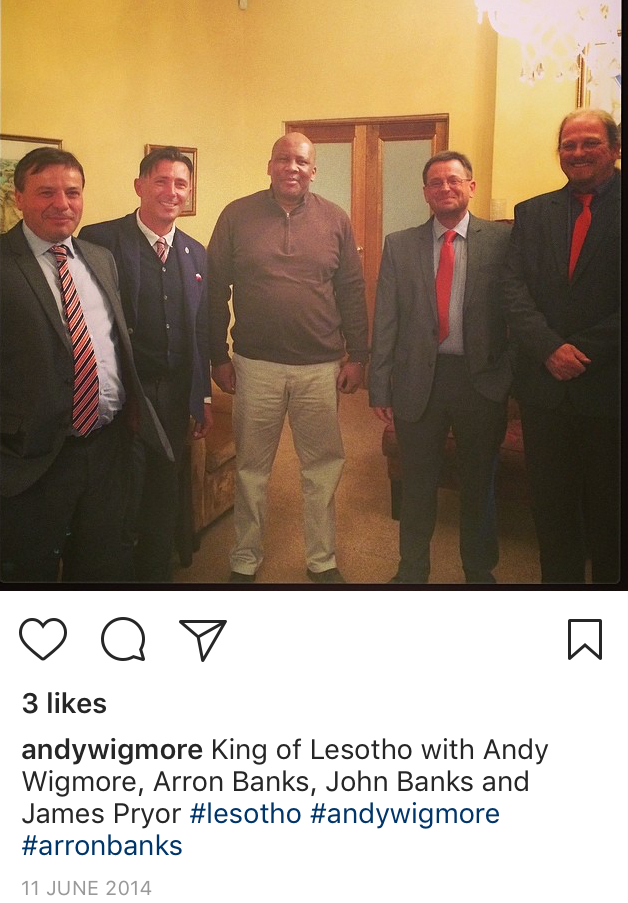 On the Chartwell website, Pryor lists his previous experience as including assistance to the Basothu National Party in Lesotho, though it is not clear in which election.

The party faces current accusations from incumbent Prime Minister, Pakalitha Mosisili, who says the BNP founder, Lesotho Leabua Jonathan, was a lackey of the British who turned a blind eye to his “atrocities” to undermine Lesotho’s independence.

He states a vote for them would be tantamount to returning the country to the “dark era” of nationalist rule. “Chief Leabua, supported by the English, was not ready to accept defeat. He declared a state of emergency and suspended the constitution instead. Basotho entered a dark era in which their basic human rights were violated. A lot of people were killed, while some Basotho were literally buried alive in places like Lipeketheng at Hlotse in Leribe district. Those were the acts of the nationalists.”

“Last year, we celebrated 50 years of Lesotho’s independence and we have now begun another journey. Like I said, we started the first journey on a wrong foot under a nationalist regime. We cannot afford to repeat that mistake by starting another 50-year journey under a government of nationalists,” he added.

Chief Malapo of the BNP responded with a now internationally familiar, Trumpesque narrative, saying “Ntate Mosisili is a pathetic liar. He believes he can fool every Mosotho with his distorted information and propaganda.”

Mr Wigmore and Mr Banks have been asked if there is any financial support given by donation to any of the Lesotho political parties. As yet there has been no reply.

The BNP’s history is colourful, fractious, and deeply tied to Russia.

After trips to the People’s Republic of China and the Eastern Bloc in May 1983, Basotho Prime Minister Leabua Jonathan announced that China and the Soviet Union would be establishing embassies in the kingdom. The South African government responded angrily to the announcement and reminded Jonathan of a promise he made in 1965 not to allow an embassy of any communist country in Lesotho so long as he was Prime Minister. Vincent Makhele, the Basotho Minister of Foreign Affairs, visited Moscow in September 1984 for discussions with officials in the Soviet government.

In a sign of increased KGB presence in Lesotho, staffing levels in the embassy in Maseru were increased and in May 1985 the Soviets appointed their first resident Ambassador to Lesotho. In December 1985, Makhele returned to Moscow and signed a cultural and scientific co-operation agreement (along with a technical and economic agreement) with the Soviets.

Soviet inroads in Lesotho suffered a setback when Jonathan was overthrown in January 1986 in a military coup which was led by Justin Lekhanya. The Russian embassy in Maseru was closed in August 1992 and the Russian Ambassador to South Africa has been allocated to Lesotho since. The two countries have maintained a history of bilateral agreement, however – predominantly with Russia providing scholarships, including to senior government officials.

In the summer of 2014, around the time of Banks’ group meeting with the king, Russia began to deliver humanitarian aid to Lesotho. 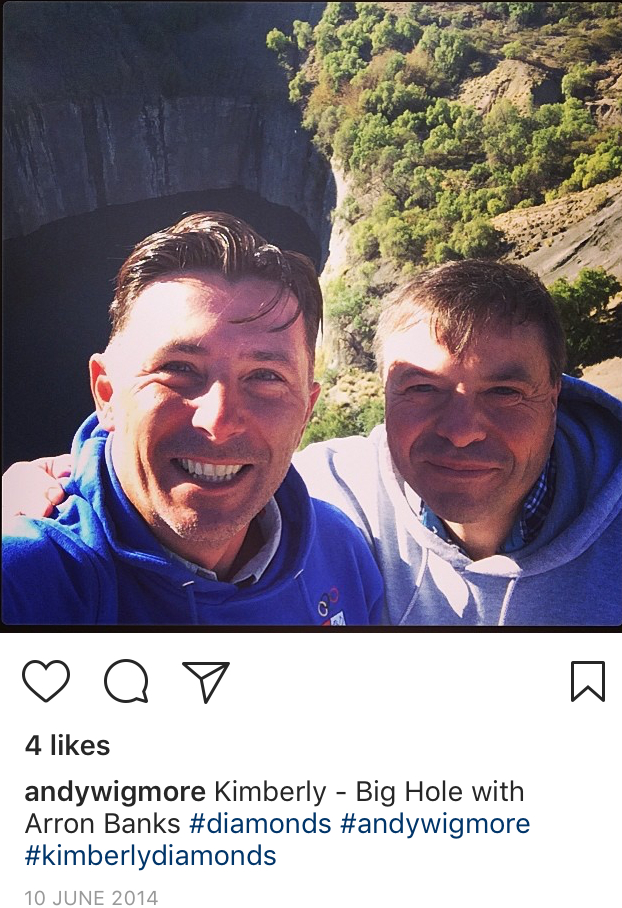 Ahead of the 2017 election, the Construction and Mine Workers Union have accused diamond mines of coercing their workers into signing advance voters applications in violation of their rights. They have lodged a joint call with the Transformation Resource Centre, asking the Independent Electoral Commission to intervene and assure the miners are protected.

In a strongly worded attack, they made plain it was a criminal offence to “force workers to provide the IEC false information about employment” or to “prohibit workers from voting” on Saturday the 3rd of June 2017. Tskioane Peshoane of the TRC accused the government of condoning the contravention of the electoral act by foreign companies.

Mr Wigmore and Mr Banks have been asked if they are aware of the CAMAU concerns, whether this affects their own operations, and if they have any concerns of their own. As yet there has been no reply.

The responses of Mr Wigmore and Mr Banks should shed some interesting light on Lesotho’s forthcoming – and clearly fractious – election.

Mr Banks is also involved is charitable work in the country.

*Due to human error and volume of background material from diverse sources, some links or attributions may be found to be missing at a later stage once contemporaneous news reporting period have ended. Any such issue will be corrected as soon as reasonably practicable.