Today in the Justice council, 20 Member States reached a political agreement on the establishment of the new European Public Prosecutor’s Office under enhanced cooperation.

The European Parliament will have now to give its consent. Once in place, the independent EU public prosecutor will be equipped with the power to investigate and prosecute criminal cases affecting the EU budget, such as corruption or fraud with EU funds, or cross-border VAT fraud. It will be a strong, independent and efficient body specialised in fighting financial crime across the EU.

Commissioner Günther H. Oettinger, in charge of Budget and Human Resources, said: “We have zero tolerance for fraud against the EU budget. Every cent of it needs to be spent for the benefit of EU citizens.With a strong, independent and efficient European Public Prosecutor we are strengthening our efforts in protecting taxpayers’ money by ensuring a European approach to the criminal investigation and prosecution of criminal offences affecting the Union budget. This will be a substantial addition to the current means at Union level, namely the work of OLAF in the area of administrative investigations.”

Every year at least 50 billion euro of revenues from VAT are lost for national budgets all over Europe through cross-border fraud. Transnational organised crime is making billions in profit every year by circumventing national rules and escaping criminal prosecution. Outside the area of VAT, in 2015 the Member States detected and reported to the Commission fraudulent irregularities for an amount of around EUR 638 million. National prosecutors’ tools to fight large-scale cross-border financial crime are limited. The new EU prosecutor will conduct swift investigations across Europe and real-time information exchange.

The European Public Prosecutor’s Office will operate as a single office across all participating Member States. It will be a highly specialised and independent office, set up outside the existing EU institutions and services. The European Public Prosecutor’s Office will act in the interest of the EU and will not seek nor take instructions from EU institutions or national authorities.

The European Public Prosecutor will be organised with a central office at EU level and a decentralised level consisting of European Delegated Prosecutors located in the Member States, who will also continue their function as national prosecutors (“double hat”). The central level will supervise the investigations and prosecutions carried out at national level, to ensure effective coordination and a uniform approach throughout the EU. In this way, it will bring in a wide range of expertise and experience about national legal systems while maintaining independence. If the Office takes up an investigation, national authorities will not exercise their competences for the same criminal activity. 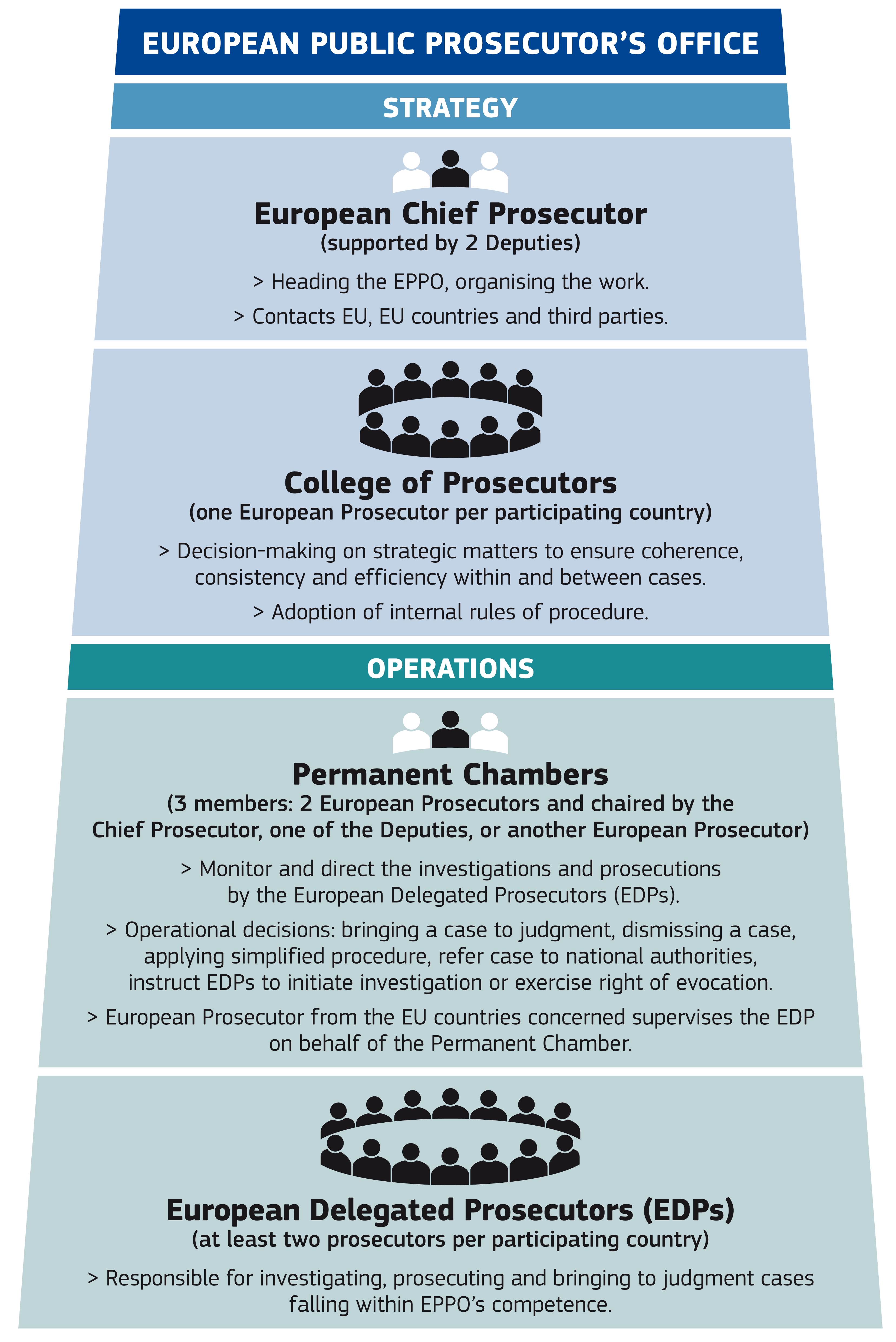 The European Public Prosecutor will be able to investigate efficiently crimes against EU budget and VAT fraud, such as fraud involving EU funds over 10 000 euro and cross-border VAT fraud over 10 million euros. It will be able to act quickly across borders without the need for lengthy judicial cooperation proceedings. It will bring actions against criminals directly in front of national courts. This should lead to more successful prosecutions and a better recovery of the defrauded money.

While the European Public Prosecutor’s Office will be responsible for criminal investigations, OLAF will continue its administrative investigations into irregularities and fraud affecting the Union’s financial interests in all Member States of the Union. This approach will ensure the widest possible protection of the EU’s budget by increasing the conviction and recovery rates.

Following the general approach reached in the Council today among Austria, Belgium, Bulgaria, Croatia, Cyprus, Czech Republic, Estonia, Finland, France, Germany, Greece, Italy, Latvia, Lithuania, Luxembourg, Portugal, Romania, Slovakia, Spain and Slovenia, the European Parliament will have to give its consent, before the Regulation can finally be adopted. Other Member States may join the 20 founding members at any time after the adoption of the Regulation.