I first came across Trend Microsystems while investigating the Russian state-led interference in US, UK, and EU elections.

The complex hybrid operation, assessed by intelligence services to have been ordered by Putin himself, utilised spy agencies and so-called deniable assets with no direct links to the Kremlin.

Trend Microsystems have now released an incredibly detailed research paper on Fake News and how it can be spread by these deniable assets through the cash-driven assistance of an underground network of privateers.

The complex hybrid operation, assessed by intelligence services to have been ordered by Putin himself, utilised spy agencies and so-called deniable assets with no direct links to the Kremlin.

Rightly, the cyber security firm opens their report by highlighting the true significance of what could otherwise become a throwaway term. “The term “fake news” became increasingly common during the past year. While this concept has many synonyms—disinformation campaigns, cyber propaganda, cognitive hacking, and information warfare—it’s just one facet of the bigger problem: the manipulation of public opinion to affect the real world,” the report says.

“Until society agrees to the norms—whether through government regulation or societal self-regulation—various parties will abuse it to serve their agendas. This results in false information reaching the public—deliberately or by accident. Either way, it results in what we know as fake news today,” the experts add.

My own investigations have established a clear lack of suitable regulation and ineffective counter-measures, both of which have combined to create the environment in which two Western democracies were successfully subverted by Russia.

The report makes no bones in explaining exactly how useful disinformation is, and how it works within the same sphere of influence as the big data and psychometric tactics utilised by companies like Cambridge Analytica. By “manipulating the balance of how a particular topic is reported (whether that concerns politics, foreign affairs, or something more commercial),” the report says, “the views on that topic can be changed. This can be done either with inaccurate facts or with accurate ones twisted to favor a particular view or side.”

According the analysts at Trend Micro, social media posts also have to attract the target readers of their operation. “To do this,” Trend says, “the fake news posts are crafted to appeal to its readers’ psychological desires—confirming biases, the hierarchy of needs, etc.” 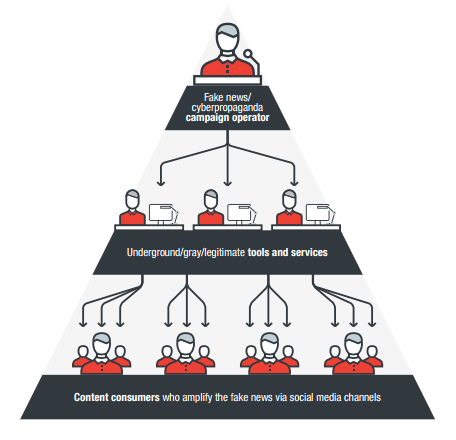 In addition, the report sets out that some services use crowdsourcing mechanisms to manipulate real users into doing the bidding of fake news promoters. “For example, offer users free likes in exchange for a number of likes produced by the participating user,” the report states.

“It would be nearly impossible for social media networks to distinguish such manipulated activity from actual or natural user actions,” Trend analysts add.

“Until society agrees to the norms—whether through government regulation or societal self-regulation—various parties will abuse it to serve their agendas. This results in false information reaching the public”

In their detailed analysis, Trend Microsystems set out that the key benefits to using the underground market begin with cost. “Legitimate advertising is more expensive compared to the costs of fake news (which is important to smaller, less-funded actors),” they write. They also add that viral spread through “users” also gains more traction.

In a previous article, I’ve written about the existence of the St Petersburg “Troll Army,” a Kremlin-linked operation which works with bots and humans to spread disinformation and steer public opinion. Trend’s report compliments the assessment and expands upon the costs in detail.

“The pricing models are generally simple: a fixed amount of money results in a fixed amount of actions and manipulations performed on a social media site (likes, favorites, etc.). Some of these services guarantee the quality of these actions as well (i.e., they will use humans instead of bots, etc.),” the report says.

One Russian company, Jet-s, can purportedly manipulate petitions on platforms like change.org.

This clearly would have the ability to drive more significant change than push messaging alone, as these petitions are often used to influence governmental behaviour.

Another Russian site, Weberaser, focuses on “taking down and removing undesirable (and ironically, fake) content or information from the internet, or removing top results from search engines.”

Its services, depending on the complexity of the task and available time, start from RUB 3,000 ($50) if the customer can read Russian or use a machine translator. With Cambridge Analytica’s parent company having recently changed its website, deleting reference to SCL Elections, services such as Weberaser are clearly a useful, if not dangerous, tool.

The services available in these underground markets clearly extend beyond spreading fake news alone. However, the key factor driving the dark economy is the same reason deniable assets have always been relied upon in espionage and other state activities: anonymity.

Using this underground network it is, Trend highlights, much easier to hide the true origin of any campaign.

“The services available in these markets clearly extend beyond spreading fake news alone, however, the key factor driving the

dark economy is the same reason deniable assets have always been relied upon in espionage and other state activities: anonymity.”

Fake news, Trend Microsystems rightly says, is a “means to an objective, not an objective in and of itself. The parties who commissioned the

promotion of fake news sites do so with an objective in mind.”

The objective of the people utilising these campaigns and the underground network has simply been to influence and undermine Western democracies, thus affecting their international policy and military relationships. But something as innocuous as alternative facts has played a crucial role – despite being something which initially defied common sense.

“In today’s digital era,” Trend’s report says, “the attention span of a typical reader is very short. Fake news creators use this to manipulate the public.

There’s no need for an article to be sensible, complete, or factual; a sensational headline will achieve the

While the primary motives so far have been political, my own investigation concluded that the geopolitical control also led to the control of the financial markets to the benefit of those responsible.

Trends report confirms this view, setting out a stark warning for the future: “even if political fake

news is the most commonly used today, the tools and techniques that enable them are becoming more

available. It is inevitable that other motivations—such as profit—will come to the forefront in later years.”