According to the Fire Sector Federation, the Building Control Alliance is a “unique industry group made up of representatives from all the organisations directly involved in building control in England and Wales.”

Though its own website is currently not available, the organisation is described as comprising “the organisations supporting the many thousands of building control professionals – the Chartered Institute of Building, the Chartered Association of Building Engineers and the Royal Institution of Chartered Surveyors – and the professional associations promoting public and private sector building control, Local Authority Building Control and the Association of Consultant Approved Inspectors.”

The BCA, the Fire Sector Federation says, is the only place where all these “voices and competing interests” come together as one.

It appears to be a lobby group which has issued guidance and presentations, seen this morning, highlighting an exploitable loophole in the fire compliance regulations relating to the use of external cladding on buildings over eighteen metres in height. 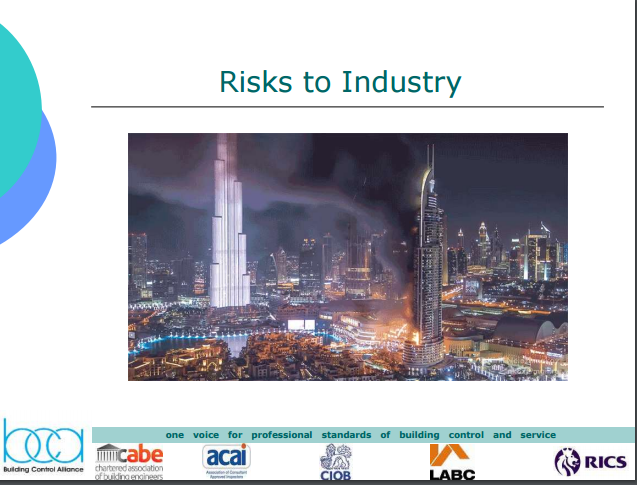 A concerned source provided copies of the documentation, saying “the guidance was issued in June 2014 – interestingly around the time the

plans for Grenfell were being drawn up. What it does effectively is add

can meet regulation 12.7 of the building regs regarding fire spread over

require either a) full physical testing of the complete system, or b) a

guarantee that all components meet the required standards for tall

buildings. It becomes a paper exercise.

The interesting pages from the presentation are “Development of BCA

Understanding” – which I believe to be a page describing the motivation

for implementing GN18. Its disturbing that it appears to be industry

According to the Presentation, which was delivered in 2014, questions had been raised for a number of years by Building Control Bodies involved in high rise

projects about suitability of some insulation types, including PIR and PUR insulation boards.

performance relative to their thickness,” being lightweight and, significantly, being available at a “reasonable cost.”

seen on site restricted its use on buildings with a floor over 18m” and the “BCA recognised a need for further industry guidance.”

The British Board of Agrément (the BBA) is one of the UK’s leading notified bodies offering approval, certification and test services to manufacturers of products and systems supplying the construction industry. They also certify competent installers.

In setting out the routes to compliance, the BCA presentation gives the first two options as using “Materials of Limited Combustibility, or testing materials to “BS 8414-1/2 and meeting BR 135 criteria.”

However, the BCA sets out the loophole as a third option, saying there can simply be a “Fire engineered assessment of cladding based on test

data,” “Carried out by suitably qualified fire engineer,” “Based on reasoned arguments/facts not opinion,” which demonstrates “equivalence of performance of a BR135

Even when setting out the option, the presentation begins to highlight obvious pitfalls in this method, stating such assessments “should use test data which is specific to the product(s)

which are proposed,” “Should justify any discrepancies between the tested and

proposed build-ups,” and that those completing these certifications should “Avoid leaps of faith!” as “Applying data from very dissimilar

materials can lead to inaccurate conclusions.”

Cavities are specifically cited as a concern, repeated in the technical guidance note. 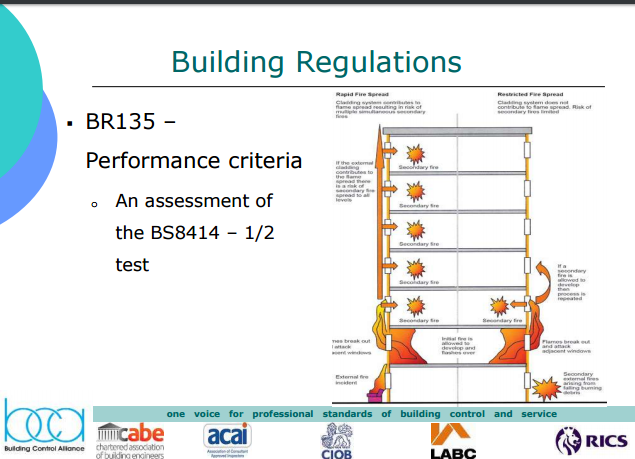 While highlighting positives of this approach, the BCA place importance on the fact that “Pre-design discussions with builders about facades are

However, they also set out the obvious negative aspects to fire certification via option three, including that “Reports from some fire engineers still based on opinion not

fact,” there only “Limited number of published tests available,” and there were “No tests using lightweight metal claddings.”

They also state that “Substitution of materials” was a known industry risk.

The presentation was provided along with a copy of the official BCA guidance note (Reference Number 18) on the use of combustible materials on residential buildings. It opens by saying “BCA technical guidance notes are for the benefit of its members and the construction industry, to provide information,

promote good practice and encourage consistency of interpretation for the benefit of our clients. “

The guidance specifically highlights the availability of the alternative certification option, stating “Where a building exceeds 18m in height, AD B2 recommends (for the entire wall area both below and above 18m)

Performance of External Thermal Insulation for Walls of Multistorey Buildings.”

The guidance broadly explains how the fire at Grenfell spread, stating “Fire spread via the external wall medium is exacerbated by the use of combustible materials and extensive

cavities. The speed by which a flame rises vertically up the external face of a building leads to potentially rapid fire

spread from lower floors to higher ones. Within the confines of a cavity, the flame will also elongate up to ten

times its length as it searches for oxygen. Hence, the need for robust cavity barriers, restricted combustibility of

key components and the use of materials with a low spread of flame rating is necessary.”

When I first began to investigate the fire, I spoke to the company representing Harley Facades, who set out the standards of the material used as regards fire spread. However, the BCA technical guidance dismisses these tests as irrelevant where a cavity issue exists. “A Surface Spread of Flame Classification does not infer any resistance to combustibility, it is solely a measure of

the spread of a flame across the surface,” it says.

Expanding upon the option three route to certification of cladding in high rise projects, the technical guidance is explicit in explaining that “If no actual fire test data exists for a particular system, the client may instead submit a desktop study report from a

their opinion, BR135 criteria would be met with the proposed system. The report should be supported by test data

not already been tested in multiple situations / arrangements. The report should also specifically reference the

tests which they have carried out on the product.”

As the BCA’s website is missing, there is no method for contacting them at this time.

This information has been passed to the Metropolitan Police Service who are investigating the Grenfell fire.