Birling Gap Perhaps Not A Mystery

The mysterious chemical cloud at Birling Gap, East Sussex may not be such a mystery.

As the Met Office confirmed today, they are only interested in weather data and are unable to comment upon chemicals or their sources. The Marine and Coastguard Agency, it is claimed, believe a ship may have been “venting”. It appears more likely it was not a ship but, rather, a boat.

Maritime monitoring agency NEODAAS, based in Plymouth, have identified the source of a plume of unidentified gas, which appeared at around 10.56am offshore on Sunday the 27th of August 2017. This is believed to have been carried to shore on the prevailing wind. The plume was significant in size and is believed to have been dispersed into the ozone, causing monitored levels to spike severely.

The NEODAAS image has been verified and clearly shows the plume emerging from the water. There are no ships in the area and the image, accurate to a ten metre square area, appears to show the substance emerging from on or just below the surface – no deeper than ten metres according to the experts. 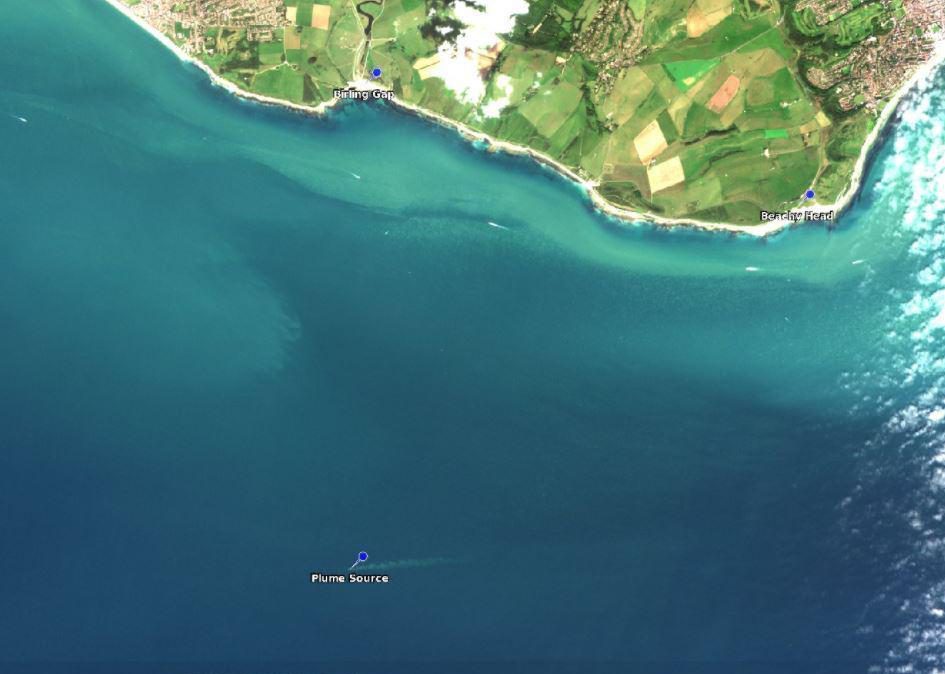 Ben Taylor, one of the monitoring experts at NEODAAS confirmed that there was no algal actitivity. “I’ve never seen anything like it before,” he told me. “I suppose it could be possible it’s a submerged object like a container or a wreck,” he added, replying to a number of theories circulating on the internet. A brief internet search does reveal a number of onshore wrecks over time on the treacherous coast, the most notable being the Coonatto. The area is also famous for cliff erosion and collapsing properties. However, a less mysterious explanation has emerged as possible.

Taylor confirmed the area where the plume originates is around thirty metres deep and surrounded by even deeper water.

The area is able to accomodate submarines.

Speaking to a naval source with detailed knowledge of submarines, they confirm the depth is sufficient “for a boat to run without broaching” – meaning the conning tower would not break the surface. A submarine, such as the relatively new additions to the Russian fleet, are designed for shallow water operations and carry a range of sea, air, and land targeting missiles. One, nicknamed the “Blackhole submarine” by NATO due to its stealth capability, is believed to be the quietest diesel-electric submarine in the world.

The plume, however, is not likely to be a chemical weapon. “It’s highly unlikely as weather would be too broad a variable on impact and effect,” the source told me. “However,” they continued, “submarines do have to vent noxious substances. Diesel, propellant, other noxious items. They would also vent during a fire, for example.”

On board fire in a submarine is not unknown. In November 2008, the K-152 Nerpa suffered an incident during trials in the Sea of Japan and resulted in 20 deaths when two compartments were filled with fire suppressant chemicals. 41 people were also injured, some suffering frostbite type injuries from narcosis caused by a release of Freon R-114B2 gas. Minor exposure to Freon gas causes irritation to the eyes, ears and throat, headaches, nausea, vomiting, dizziness, respitory problems and can cause chemical burns. The gas is colourless and odourless.

150 people exposed to the chemical cloud at Birling Gap were treated for similar symptoms and the substances was described as having no colour or smell. Chlorine has been ruled out by authorities.

Neither the British nor Russian military comment on submarine movements.