#Whitewash 1 – The Rise of The Nazis

On the 15th of July 1944 a teenage girl named Anne Frank wrote to her friend Kitty. She used her diary, in fact an autograph book she received for her 13th birthday, and her words that day were: “I simply can’t build up my hopes on a foundation consisting of confusion, misery, and death. I see the world gradually being turned into a wilderness, I hear the ever approaching thunder, which will destroy us too, I can feel the sufferings of millions and yet, if I look up into the heavens, I think that it will all come right, that this cruelty too will end, and that peace and tranquillity will return again.” She and her family were arrested in occupied Holland a month later and Anne died of Tyhpus in the concentration camp at Bergen-Belsen early the following year.

In the wake of World War 2, the world formed a pact never to repeat the horror of war and mass genocide which Hitler’s Germany brought to bear. Treaties were signed across Europe and the Atlantic, eventually creating the EU and NATO. Bringing seventy years of near peace. However, in 2016, a new period of change was accelerating, with Donald Trump having been elected to the White House and Britain having voted to leave the European Union. Both campaigns were seen as victories for right-wing politics and hailed by supporters as a reclamation of domestic economy and national identity. 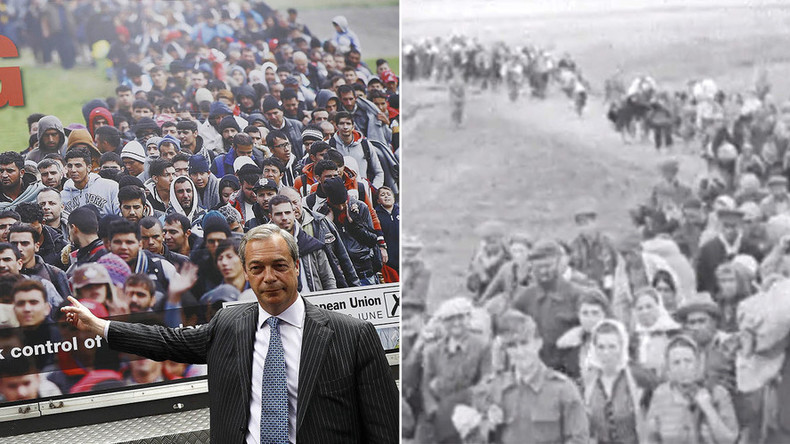 By the 26th of January 2017, the vilification of immigrants had become a national policy in the US, with Trump targeting Muslims and Mexicans alike – with his travel ban and wall. The response of Steven Goldstein, Executive Director of the Anne Frank Center for Mutual Respect in New York, was clear. He said: “President Trump is beyond the wrong side of history. He is driving our nation off a moral cliff.” Goldstein’s voice was joined by the The Southern Poverty Law Center, a civil rights organisation, which stated: “Trump’s run for office electrified the radical right, which saw in him a champion of the idea that America is fundamentally a white man’s country.”

Britain is in no better shape. After the Brexit referendum, police forces across the United Kingdom saw the largest increases in recorded hate crime in history and the United Nations condemned the “divisive, anti-immigrant and xenophobic rhetoric” and lack of action the government. The concerns were echoed by David Isaac, chairman of the Equality and Human Rights Commission, who said: “There are concerns that the acrimonious and divisive manner in which the referendum debate was conducted exacerbated worrying divisions in British society, and has been used by a minority to legitimise race hate.”

In Britain, at Finsbury Park, and in the American city of Charlottesville, acts of openly racist terrorism committed in the name of white supremacy have murdered and injured innocents. Even as the world recoiled in horror, the actions were defended by the far-right. British extremist Tommy Robinson of the English Defence League told a television audience one day after the fatal Finsbury attack: “Islam is an idea. A bad idea. Like Scientology. There’s no such word as Islamophobia. A phobia is an irrational fear. It’s not irrational to fear these things.” And, following Charlottesville, Trump himself refused to attribute responsibility to the white supremacist who committed the act of domestic terror, instead condemning a “display of hatred, bigotry, and violence on many sides.”

The Charlottesville protesters were demonstrating against an open Nazi and White Supremacist march and those at Finsbury Park were attending their mosque for prayers when the attacks took place.

Both the Trump and Brexit elections were directly interfered with by Putin’s Russia, a criminal organisation with state machinery and a dark economy. An unsuccessful attempt was made to do the same in what is now Emmanuel Macron’s France and Russian efforts are now focused on Germany, as Angela Merkel vies for her fourth term. But Russia’s act of war insidiously harnessed the far-right across the US and Europe in order to succeed – from established political parties such as Nigel Farage’s UKIP, the Sweden Democrats, Italy’s Lega Nord, and Marine Le Pen’s Front National, to the less socially acceptable – such as the KKK – and lesser known and newly emerged groups – such as the so-called alt-right. Though the Alternative War was fought and won by Russia before most people knew it had even begun, it could not have succeeded without the use of these movements. The usefulness of the far-right to Russia in their global war effort is, in fact, unsurprising. Based on the geopolitical strategy of white supremacist Dugin, deployed by Putin’s state, a lasting legacy of racial and sexual division – chaos in effect – is necessary to ensure the victory remains intact. That no recovery takes place. The far-right not only made the perfect partners in the run up to the operations targeting democracy and defence, but play a pivotal role in maintaining the ongoing disruption.

Globally, the groups and parties have tried to pass themselves off as different from those who executed millions but they are not. They are Nazis. Their core beliefs are practically unchanged from the days of Hitler’s rise. They preach of needing space to expand as nations, bowing to the will of the people and uniting behind common causes, standing shoulder to shoulder under one leader who is beyond control of the executive and legislature. They paint enemies within who must be destroyed: immigrants, demonstrators, so-called neoliberals, the phantom ‘leftists’. While demonising these people, creating a sense of imminent and constant danger, they simultaneously play victim to diversity while proclaiming their rights more pure than all people of colour, women, and anyone from the LGBT community. Overarching all of it, the nationalist narrative of economy hides their true nature in its shadow as they talk of economic independence, self-sufficiency, exports. They speak endlessly of taking back control. Lebensraum, Führer, Social Darwinism, and Autarky.

Though it would be easy to simply call them fascists, the situation is already more complex a mirror of Germany of the 1920s. These groups co-ordinate their appeal not only to fascists, with their policies of a perceived strong central government and control of the media, but to others too. Just as the Nazi Party’s 25 point plan once did. They reach out to socialists, nationalists, supremacists, the common racists. They are attractive to farmers, the lower and lower-middle classes, and the self-preserving wealthy. Much like the Nazis they emulate, they still fail to appeal to liberal and left-leaning voters and cannot harness the voting power of the educated, scientific, or critically-minded.

The propaganda being deployed is not so far removed from that of Hitler’s time either, albeit television and the internet have expanded the audience and accelerated delivery. There are still radio broadcasts, speeches, newspapers, and rallies, but the message is now carried freely into homes, bedrooms, and even to people as they are on the move. Crucially, there are no longer national boundaries. Memes and hashtags have largely replaced the crude slogan posters the Nazis of the 1920s, used to introduce ideas and to make them appeal to the ordinary people of Germany. However, even these have started to reappear. Pepe The Frog, a racist emblem of the so-called US alt-right, has started to appear on stickers across England and London is now seeing the emergence of “Good Night Left Side” stickers featuring the image of a Dodge Charger – the vehicle the attacker used in Charlottesville. Emboldened by the lack of decisive government response to curtail their action – and while it is encouraged, even – the once clandestine online domain of the Nazi is now transitioning to the real world. They no longer feel ashamed. They are no longer an underground movement or counter-culture. They have become the mainstream once again. 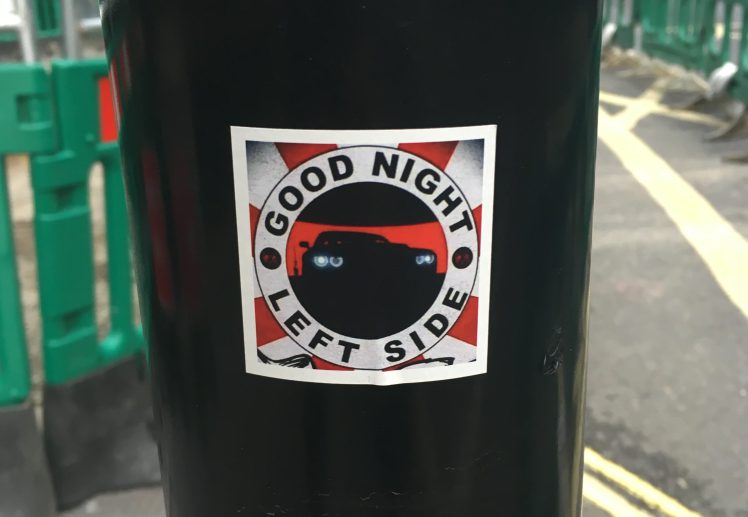 The chaos generated is purposeful at every level. As Orwell wrote: “who controls the past controls the future. Who controls the present controls the past.” Presently, the Nazis have control. They occupy governments, control the superpowers, occupy almost every line of media coverage. In the last year they have generated at least a decade of daily news, dwarfing mainstream content with deliberate, unregulated conspiracy and lies. They own the here and now and in this arises a further risk which many are overlooking, despite how blatant it has become. Look to the simple changes: the surge in climate change denial or flat earth theory, which run contrary to all known science and history. It is not accidental. If you can persuade a person everything they have ever learned about the earth being a sphere may be wrong, you can persuade them slavery may never have happened. Racism may not be real. Sexism might not exist. Paedophilia could be acceptable. Genocide may be a positive. If you can generate enough chaos, peddle enough falsehoods, most people will stop listening to all input barring the one which is in control of their daily lives. And if they aren’t listening hard enough, demonise protest, control what people are told, regulate their information access. Arm the militias and sympathetic police officers. Force acceptance. Crush opposition. Eliminate the problems.

The Nazis are rising again and time is running out. This new incarnation of evil has been seeded everywhere and the opportunity to stop it is ever reducing. The difference between now and 1920s Germany is we cannot point at one person and say “there’s the Führer” – it is necessary to pull this global Nazi organisation apart piece by piece.

Over the course of this investigation I will be exploring the Nazi groups across the world and, where possible, those they have affected. I will try to examine how they interact, how they are funded, and why they choose to commit themselves to such hideous ideology. The darkest question of all I hope to answer is how such sentiment has continued to exist within us, waiting only to be brought to the surface and given permission.

It is early September in 2017 and I am writing words I never thought I would have to: the Nazis are rising again. We can hear the approaching thunder, which may destroy us too.