A report from the Reuters Institute for the Study of Journalism reveals that UK press coverage in the weeks leading up to the EU Referendum was dominated by pro-Leave articles.

Produced in partnership with media insight specialists PRIME Research, the report includes analysis of two days of press coverage each week for the London editions of nine national newspapers over the four months of the campaign.

Dr David Levy, Director of the Reuters Institute and one of the report’s authors says: “The research reveals a picture of highly polarised press coverage, reliant on a narrow range of voices, and where coverage was relatively more focused on the contest itself and personalities than any of the complex issues at stake. In that sense, in spite of some notable exceptions, the press was generally better at reinforcing the views of decided voters than in giving undecided voters, seeking broad facts and high-quality information, the evidence to make up their own minds.”

Key findings from the report include:

Of the articles focused on the referendum, 41% were pro-Leave, while 27% were pro-Remain, creating a dominant pro-Leave presence. 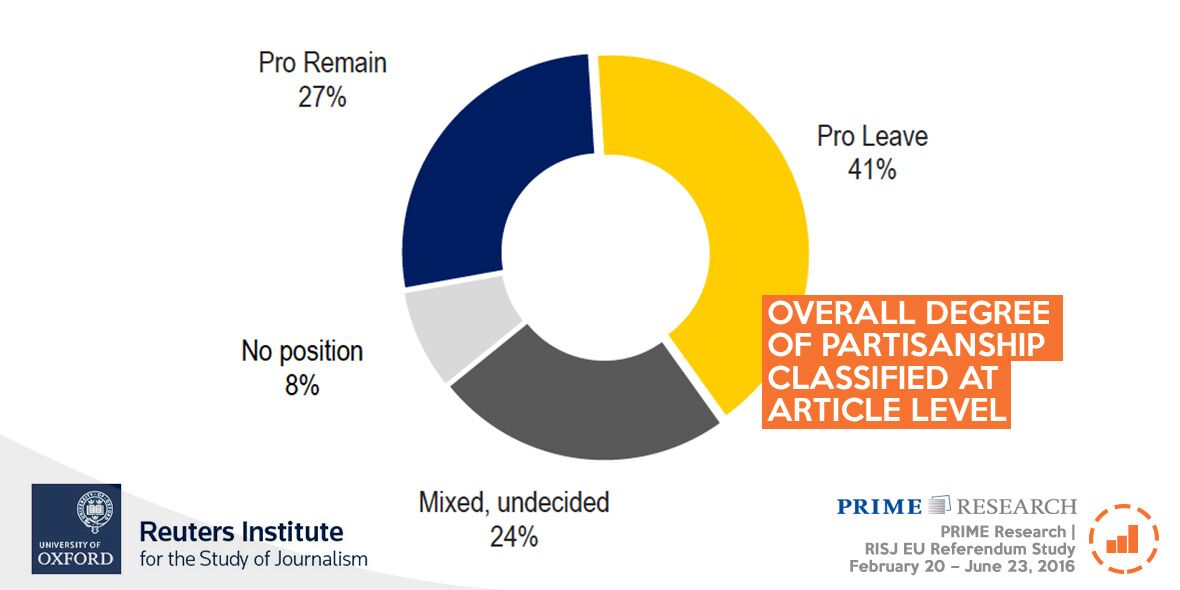 After factoring in the reach of different newspapers, the pro-Brexit dominanceis further accentuated, with 48% of all referendum-focused articles pro-Leave and just 22% pro-Remain.

Six out of the nine newspapers followed this pro-Leave dominance, with the strongest positions in the Daily Express, followed by the Daily Mail and the Sun.

The Daily Mirror had the highest share of pro-Remain articles, followed by the Guardian and the Financial Times. 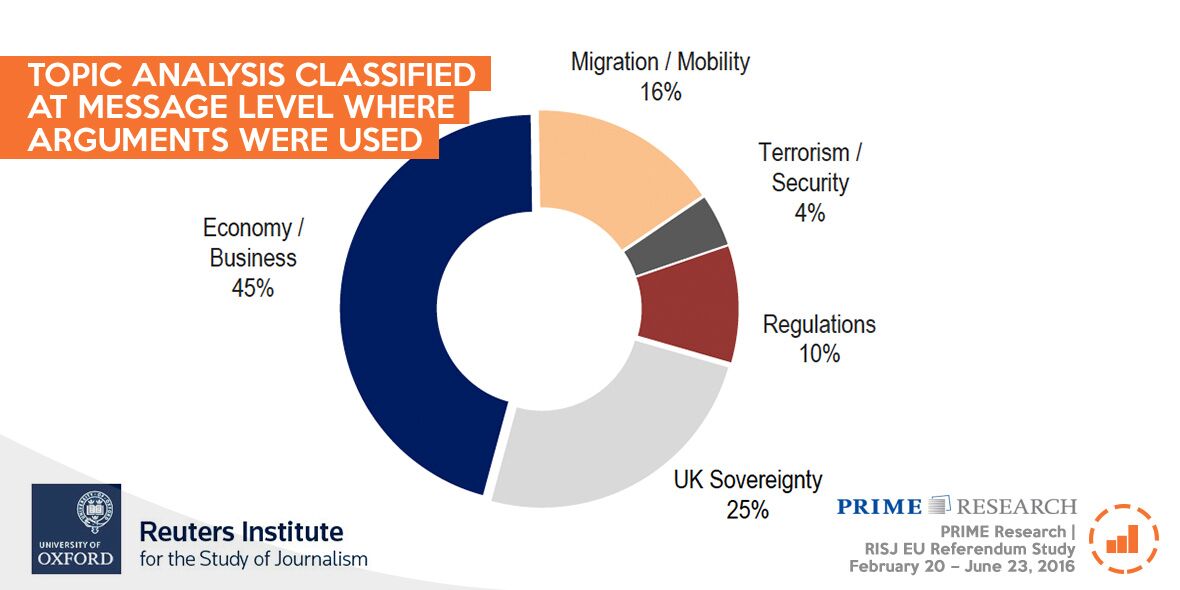 The economy was the most cited referendum issue covered in articles, followed by sovereignty and migration.

The economy was cited in both pro-Leave and Remain articles, but sovereignty and migration skewed heavily to pro-Leave articles. 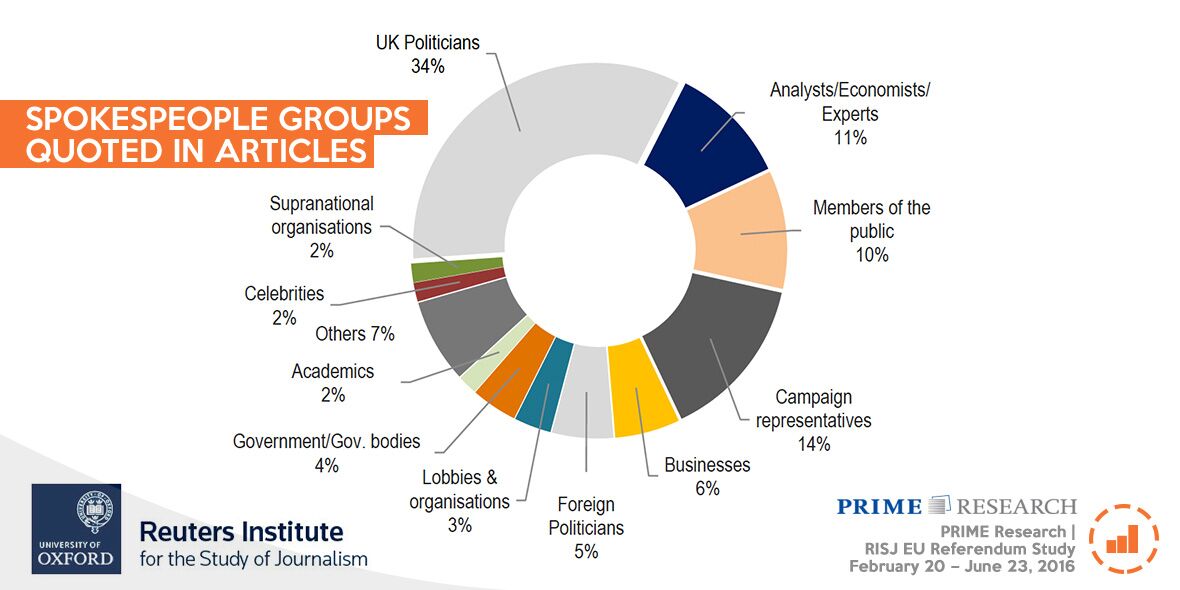 Of the small number of academics quoted, one, Professor Patrick Minford, heavily associated with the Leave campaign, accounted for a fifth of all quotes on our sample days. 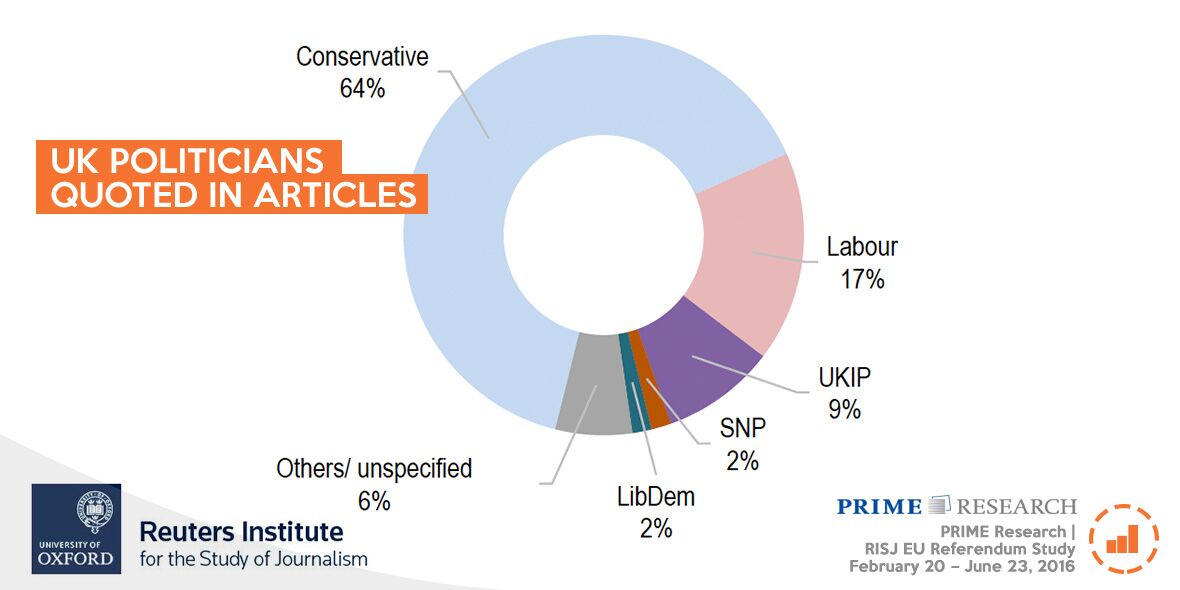 The most quoted politicians during the campaign period were former PM David Cameron (quoted in approximately14% of articles) and Boris Johnson (10%).

Current PM Theresa May kept a relatively low profile as the eleventh most cited politician.

Labour leader Jeremy Corbyn was the eighth most cited politician, quoted in just 3% of articles. This trend was true even in the left-leaning press; he was quoted in 3-4% of articles in The Guardian and Mirror, about a third as many times as David Cameron or Boris Johnson.

“Pro-Leave articles did play to fears, notably around migration and sovereignty”

The report finds marked differences in tone between the Leave and Remain arguments in the press.

While the pro-Remain articles focused largely on thesingle issue of the economy, they adopted agenerally very negative tone, apparently reluctant to use positive language, and gave pessimistic forecasts of a pro-Brexit future.

In contrast, pro-Leave articles adopted a more positive tone, balancing criticism of the status quo with hopeful messages for a pro-Brexit future.

Pro-Leave articles did play to fears, notably around migration and sovereignty, but their future-oriented messages were more “optimistic.”

Diego Bironzo, Account Director at PRIME Researchand one of the report’s authors says: “The granular topic analysis performed for this study shows that the winning campaign adopted a broader range of topics and tones. The Leave camp’s more varied and often emotive messaging not only proved effective in gaining media traction: ultimately, by approaching different issues (such as controlling migration, regaining sovereignty, using EU budget contributions for the UK) at different times, it resonated with different news audiences.”

The full report is available here.