Spain, you fucking moron! You walked into a bar-brawl and punched the landlord’s grandma. I’ve seen some particularly stupid things in my time – a man with swine flu once ate through a partition wall, for example – but sending riot police to beat up voters in a place you want to remain united with? It’s like inviting your mother-in-law to dinner, to bury the hatchet, and lodging it in her skull while your wife looks on. “There, that ought to make things better!” It’s the kind of solution to a delicate matter of constitution and diplomacy you’d expect from a boiled cabbage.

But don’t think you’re off the hook, Catalan Government, you chopsy little fucker. I saw you at the Moscow seperatists meeting in 2015, plotting for your part in a “multi-polar” world. While you were getting bollocked for not denouncing the “bad, bad USA,” the one true saving grace was the absence of Scotland – who know when they’re being played like bagpipes after years of colonial British rule. I also watched you cast off the ruling of the Constitutional Court as if it meant nothing, knowing full well that the people on the street would have to face the consequences of your decision. And in this lies the question no one has yet had the presence of mind to ask: If you can’t be trusted with the rule of law now, how can you be trusted any more than Erdogan when the constitutional court is one you create yourself?

Because of this mess the EU, with its time-honoured tradition of not poking its nose too far into sovereign issues for fear of nationalist uprisings like Brexit, has fallen down the stairs and broken its hip in a bear trap. Worse still, the cunning plan laid out by the malignant rectal tumour of Putin’s Kremlin has metastatised, spreading across the EU’s organs like clown spunk at a circus orgy while they’ve been worrying about a sore bollock – the great British testicle swinging in their lap. So here they are, lying on the floor with a fucked leg, now facing terminal cancer sent from Russia with anything but love.

Unfortunately, this now means those of us stuck flapping around on Europe’s flailing right scrotum have to suffer to bewildering hypocrisy of Nigel Farage, as he bleats on about the failure of the EU to intervene in Spanish domestic politics, while simulataneously wind-bagging the EU should get knotted from domestic politics. This is exactly the kind of shit I used to have to listen to as a pub landlord, slurring nonsense from red-faced human cysts, as drunk on the sound of their own voice as the booze they’ve quaffed.

Last week Labour went competely rogue at their conference. There was weird chanting, threats of hologram projections of Corbyn reminiscent of the Emperor in the Star Wars films, and it got worse. They want to remodel Britain on Venezuela, devaluing the currency to do so, and simulataneously ignore Brexit – which makes all but creating a smouldering hole where an island once was impossible. It struck me we’ve seen this before and Douglas Adams was, in fact, the prophet of Labour’s inglorious future plans on dealing with an avoidable economic catastrophe. 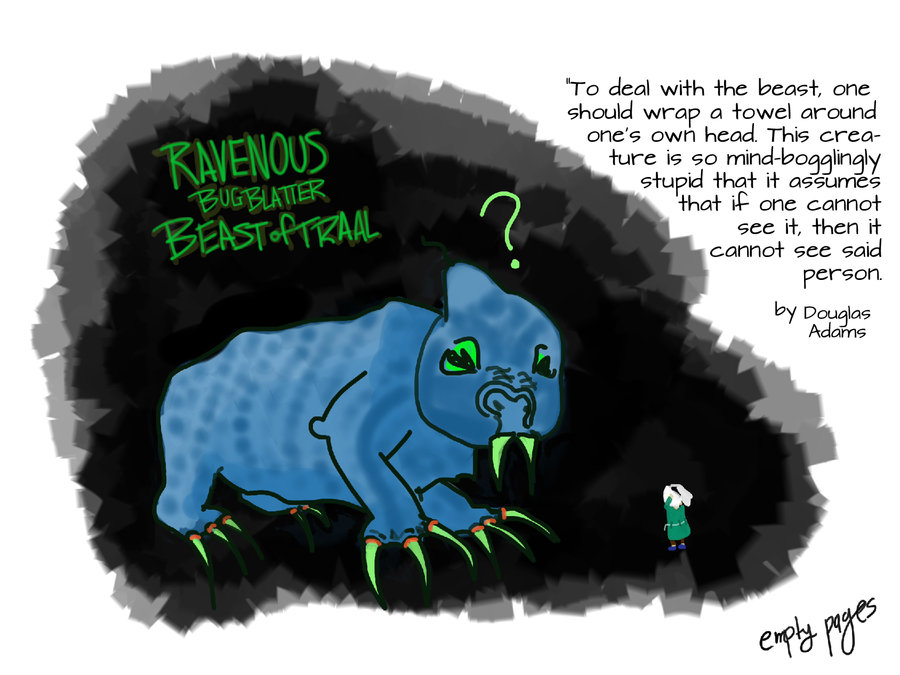 Thankfully, the seeping lead in the pipes at the Houses of Parliament knows no political allegiance and has been ably poisoning the rabid Tories too.

Pob-inspired clapaholic Michael Gove has set out his vision for a Green Brexit, what he calls a “special prize” – which I assume involves some kind of STD caught from sheep as we desperately try to diversify the gene pool after ending freedom of movement.

Personally, I think he may mean a Brexit based on the naivety level of slaughter lambs on their way to shed so yes, it will be green.

Never one to miss out on trying to out-hyprocrisy Farage on behalf of a party which now consists of a large number of over 70s, some empty seats, and a full reservoir of fresh bullshit, Priti Patel entered the fray. With the self-awareness of a filing cabinet, she launched an attack on Labour’s nasty side. While I don’t disagree – Labour does have a dark side, not least its growing likeness to the Imperial forces the Jedi battled – this coming from a party which has increased hate-crime to never before seen levels and is pursuing EU citizens with the vehemance of 1930s Germans at a library, is richer than a Nigella Lawson pudding.

The one ringpiece who binds them all upstaged everyone late last night, however, apparently suffering the consequences of a night on the Pimms as pumpkin o’clock struck. Gangling breeder Jacob Rees-Mogg delivered a vaccuous, backwards-looking rally to Brexit, citing Waterloo, Agincourt, and Trafalgar, the braying fringe crowd of  soul-less donkeys blissfully unaware the rest of us are sick of the meaningless drivel which spouts from the flap-mouthed embodiment of Victoriana. The truth is, Rees-Mogg would bring back Dodos to kill

them again given the opportunity.

Beyond the pubic region of Britain lies the giant ass which is America. A seething, writhing, mass of fat, white, entitled men with huge BMIs and brain cell counts best measured against a panda’s sex drive.

One look at the alt-right’s fabrication of narrative around the horrific events in Las Vegas, a story which managed to appear at the top of both Google and Facebook search results for long enough to do the damage, is like staring into the abyss of Donald Trump’s tiny mind.

The horror of Las Vegas  has also sparked a huge drive to revisit the always tense political area of gun control. But the truth is, the National Rifle Asshats are beyond any real parody and won’t relinquish their machine guns easily. However, while everyone is still saying calm reflection is needed to understand why Las Vegas happened, the NRA’s own advert holds the answer: