Cough Cough: We’re Out With No Deal 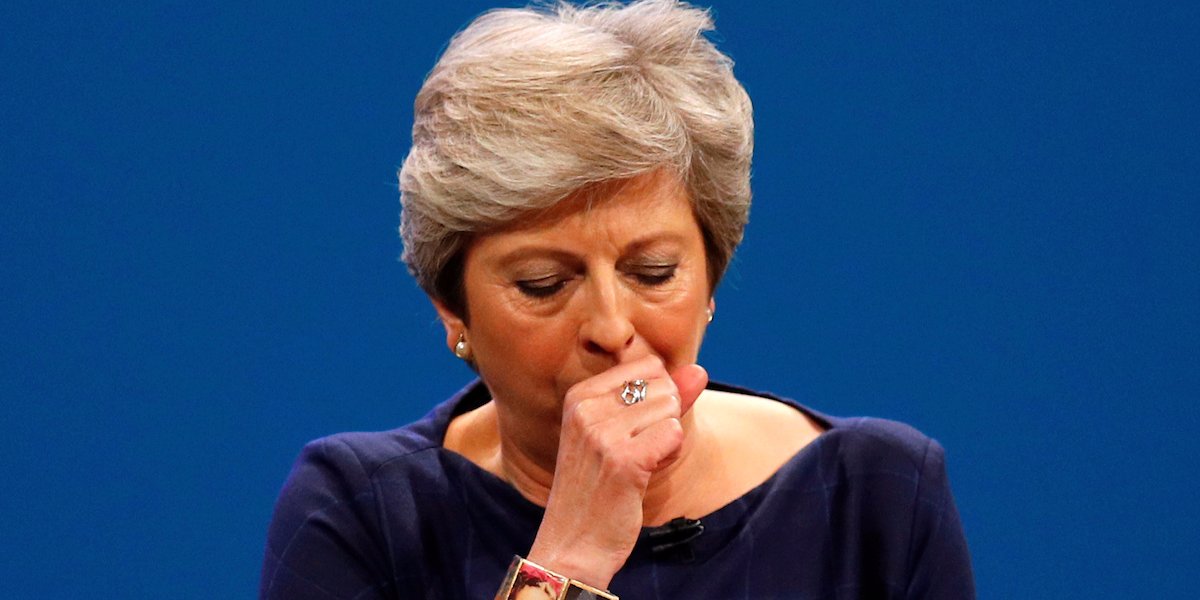 It doesn’t matter that Prime Minister Theresa May coughed through her speech. Nor that she was handed a mock P45. The falling scenery is irrelevant.

which she can claim success, no matter what other calamity arises. She

can’t be held accountable for trade (or lack of it), or any other

disaster, but she can stand honestly by the fact she took the country

She stood in front of the party faithful and cameras and told the people of Britain it is leaving the EU with no trade deal.

Quietly, softly, without fanfare she resigned Britain to the future wilderness of a wrecked economy and a permanently lowered standing in the world.

“Our first and most important duty is to get Brexit right. The people have decided. We have taken their instruction. Britain is leaving the European Union in March 2019.”

“Let’s be clear about the agreement we seek. It’s the agreement I set out earlier this year at Lancaster House and again in my speech in Florence ten days ago.”

“I believe it is profoundly in all our interests for the negotiations to succeed. But I know that are some are worried whether we are prepared in the event that they do not. It is our responsibility as a government to prepare for every eventuality. And let me reassure everyone in this hall – that is exactly what we are doing.”

“So a deep and special partnership is our ambition and our offer. And I look forward to that offer receiving a positive response.”

And there it was. The grand plan.

She has indeed made “an offer” to the EU, after constant criticism that we hadn’t been to the table for the duration of negotiations so far. She did this in Italy last month.

Seemingly unheard bewildered pleas from Michel Barnier and Guy Verhofstadt among others – for Britain to at least try to address the three key areas of citizens rights, the exit bill, and the Irish border – were also joined by the firmer voice of France’s Emmanuel Macron. Yet all efforts to get Britain in the game resulted in May’s bizarre Florence speech, where she laid the ground work for today’s subtle announcement of an exit with no deal whatsoever.

This was her offer: a deal that cannot be done.

“The British people have decided to leave the EU; and to be a global, free-trading nation, able to chart our own way in the world.”

“The United Kingdom is leaving the European Union. We will no longer be members of its single market or its customs union. For we understand that the single market’s four freedoms are indivisible for our European friends.”

“To make this partnership work, because disagreements inevitably arise, we will need a strong and appropriate dispute resolution mechanism. [May ruled out ECJ]”

“The United Kingdom will cease to be a member of the European Union on 29th March 2019.”

Rightly, the EU have already resoundingly rejected May’s “offer” on the grounds it does not address any of the issues in hand. This leaves only no deal as the deal to be done.

But this has always been the plan and we’ve known since March.

In her speech today, May has confirmed they are preparing for this end to Britain as we know it.

It is our responsibility as a government to prepare for every

eventuality. And let me reassure everyone in this hall – that is exactly

what we are doing.

As I wrote for The Common Space six months ago: “The only benchmark May has ever set for Brexit is that it means Brexit. Out. There is no other bar by which she can be measured, and this is why David Davis admitting all the things we stand to lose has such a limited impact on her personally. So she’s set out an easy stall from the beginning – a single indicator by which she can claim success, no matter what other calamity arises. She can’t be held accountable for trade (or lack of it), or any other disaster, but she can stand honestly by the fact she took the country out. She Brexited. And better still: it was the will of the people, so whether it was a bad idea becomes further irrelevant. She was just following orders…”

Nothing has changed, and the consequences will last for generations.