Imagine a war fought in cyberspace. A digital conflict designed to replicate a computer virus, which attacks the mind.

This is not fiction. Not a future dystopia. This is reality. Our reality of today…

This is part three of LoveBomb, a special investigation* into weaponised data and disinformation, social media, and counter offensives. It is recommended you read the previous instalments before this one.

*The format is, in of itself, experimental and includes multiple formats which will be refined over the course of the investigation.

Imagine a situation where you understand your network completely.

You understand how to hop from one person to another with the maximum efficiency. You know who to use as a broadcaster.

Imagine as well as that, you knew the audience you were trying to reach better than they knew themselves. Imagine you knew how to design simple things in the messages you were sending them, things like colours.

That is an incredibly powerful weapon.

But how does it work in action? This is the question.

The answer is something we can find in looking at the responses to the terror attacks of the last 18 months.

Back in May 2017, after I travelled to Sweden to investigate the truth behind the far-right narrative of rape and immigration being out of control, a very different story began to emerge. One which led to Alternative War and paved the way to developing a level of predictive analysis which had not previously been conceivable.

It was the first time the problem had even been discussed, the notion that the face of terror had changed and, with it, a complex machine of disinformation had entered into social networks and started to become the basis of news.

Knowing the breadth of the international disinformation network and who it is working for, what happened in the immediate aftermath of the 2016 Nice terror attack makes more rational sense.

Social media was virally attacked with false claims of hostage situations, a double attack – with some accounts showing images of the Eiffel Tower exploding – and claims of a further attack in Cannes. This was accompanied by almost endless images of wholly unrelated persons being named as missing persons, victims, and suspects.

Marine Le Pen, then the French presidential contender, came out almost straight away too, condemning immigration and government policy in response to the attacks and attracting a lot more voter interest than usual due to the artificially amplified public mood.

This was followed by the Berlin Christmas market attack, in December the same year and, as a result, national and international right-wing politicians and commentators drove a narrative which blamed the attack on the German Chancellor, Angela Merkel. They focused on her policy of accepting an “unlimited” number of asylum seekers and migrants.

These same groups also condemned the lack of border checks under the EU’s Schengen system for allowing the perpetrator to travel freely through several countries after the attack.

In essence, this was the same pattern I saw in Sweden, arriving only days after the Stockholm attack. The Swedish far-right was accused of trying to profit from Stockholm, much in the same way as Le Pen, and were caught by the Swedish press producing fake news and circulating fake quotations online. The disinformation included tweets and social media posts from serving officials within the Sweden Democrats.

On the 22nd of March 2017, a further terrorist attack took place in Westminster. Though the attack was instantly attributed to Islamic terrorism by right-wing figures and media outlets across the world, police have found no link with any terrorist organisation. 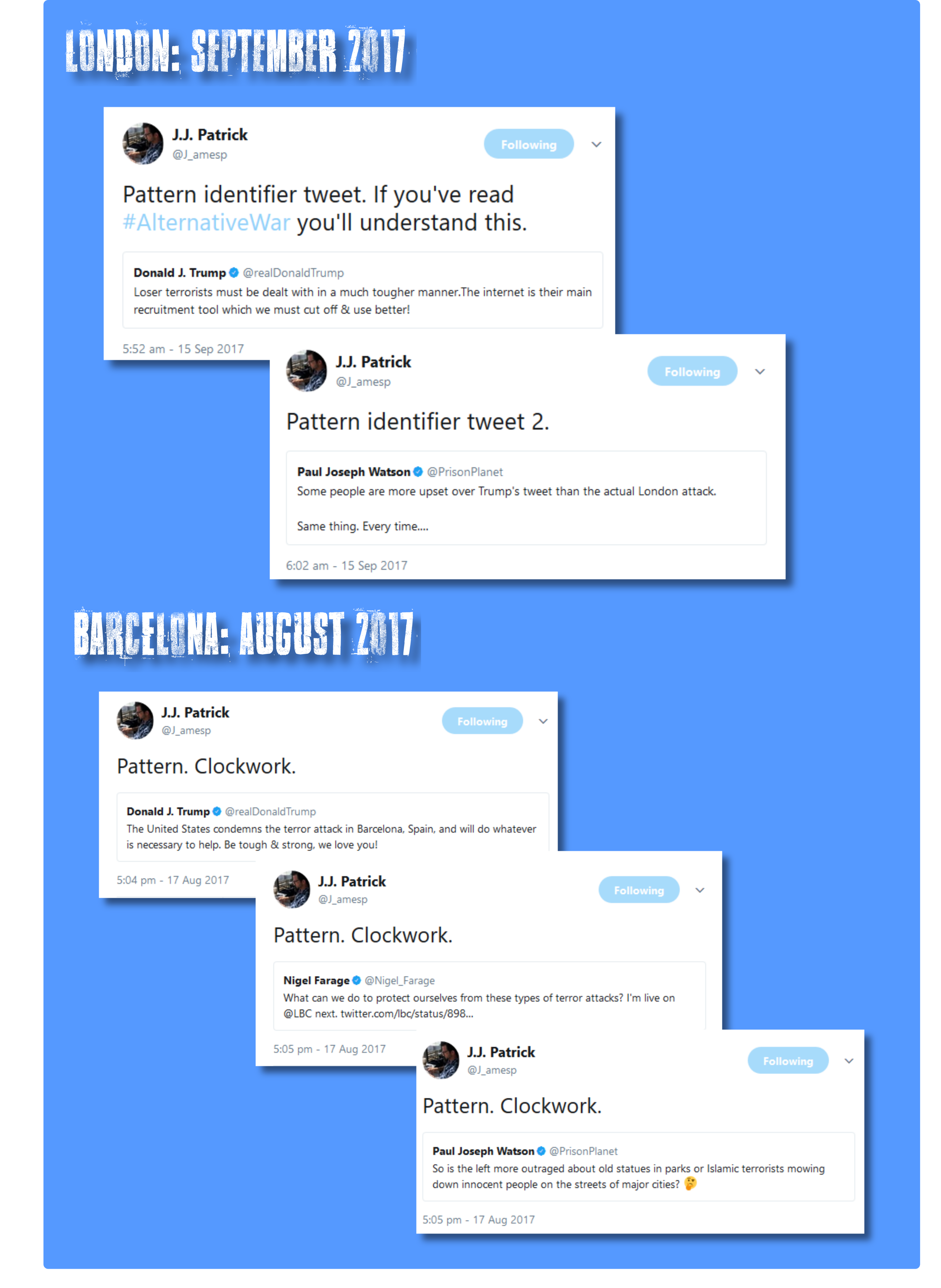 A distinct pattern emerged in the wake of these attacks, and the parties involved in the almost instant and scripted reaction were easily identifiable.

By August, the pattern was entirely predictable and undeniable.

The narrative was too similar to dismiss as being random between sources, and the information was being pushed within minutes – in of itself indicative of a tasking system being driven from a central point.

The Pattern continued with the horrific mass shooting in Las Vegas and also last week, with a non-terrorist road traffic collision in London – which was also linked to the pushback against US gun laws, again indicating specific tasking. How this disinformation becomes widespread, has become a key question. In particular as not everyone follows these far-right networks or engages with them.

The answer is Network Centrality.

The messages are spread across their own networks easily – these are “broadcasters” relying on Closeness (see Part 1 if you are behind on this) but they reach beyond by harnessing both Degree and Between-ness centrality to creep and hop to all other groups.

In part due to psychographic profiling, they are specifically able to target the people who are likely to quote and decry what they’ve said.

But this works in exactly the same way, because it allows the message to keep leapfrogging further than it ever would naturally if it were bound within its own echo chamber.

They have also harnessed a more complex element of Closeness Centrality by creating new broadcasters: the mainstream media. This bridge has been built upon the principle that the far-right is now newsworthy, ergo what their broadcasters say is newsworthy.

It follows logically that for every instance in which a report centres around what they’ve tweeted, deleted, or made up (in the case of Las Vegas, for example), the original message is spreading even further than it ever could before through social media alone.

Take the Buzzfeed coverage of Las Vegas for example. Almost inadvertently, the disinformation is being brought to a mainstream audience who would not otherwise necessarily hear it.

We need to be discussing how to adapt our approach. How the media needs to remodel the way it reports in order to counter-act both Network Centrality and Psychographic style targeting.

However, that debate hasn’t started because the problem has, until now, not been understood. Subsequently, the impact is likely to continue for a long time after this series is complete.

Sadly, in the meantime, the same situation leaves the far-right incredibly happy: because we are doing more than half of the work for them. In this mess, however, I discovered what turned out to be the key to starting to turn this mess around.

If they can profile us and our networks, could we do the same? And: could it be done ethically?

This was the genesis of the #LoveBomb experiment.