Buzzfeed has become a driving force in the mainstream media.

With that unbridled power comes great responsibility but something is wrong.

The growing outlet has become a tool for the very networks they are reporting on, helping the spread of disinformation through network centrality.

But something else is bubbling below the surface: a growing positive sentiment towards white supremacy.

While unlikely this is deliberate, it highlights the more than ever needed understanding of the power media holds over the creation of public sentiment.

https://twitter.com/J_amesp/status/920890671799599105p>In the jointly written profile of William Regnery II, Buzzfeed writers Aram Roston and Joel Anderson opened their piece by describing the white supremacist as a “press-shy white separatist” breaking his silence. This stopped me in my tracks.

The use of sympathetic language was not hidden. The tone certainly not neutral. In one paragraph a key funder of Nazis had been described in the same way as some celebrities.

But perhaps I was over-reacting, so I read further. It continued.

“One steamy May morning, in the fastidiously antique, vast parlor of the century-old Gasparilla Inn, the most expensive of the handful of hotels on the island, sunlight streamed in from the outside, and giant overhead fans pushed the musty air.

Regnery sat in a cushioned wicker chair, browsing through clippings of the day’s news. Incongruously, he wore a bright yellow spandex biking shirt. When he stood to introduce himself, his hand trembled as he offered it.

“Bill,” he said, introducing himself.

He’s frail and a bit bent, with thinning white hair and bushy eyebrows, but he is still spry, and announced plans for a 15-mile bike ride as soon as the interview was over. Speaking about a wide range of subjects, he folded his legs and looked off into the distance, wearing a serious expression and avoiding eye contact. When the questions got personal, about his family, for example, or his perceived failings, he answered calmly but began clicking his ballpoint pen, in and out, in and out.

For the first quarter hour, the subject of race did not come up. Then suddenly he introduced it. “I’m not all that race conscious,” he said, brightly at first. “I say ‘vive la différence!’”

I recognised the sick feeling in my stomach.

I’d only recently read a similarly painted profile piece on Buzzfeed, by Joseph Bernstein – whose article profiling Milo and Bannon was widely shared.

At the time, the first reading had given me goosebumps.

At the time, Yiannopoulos, who would later describe himself as a “fellow traveler” of the alt-right, was the tech editor of Breitbart. In summer 2015, after spending a year gathering momentum through GamerGate — the opening salvo of the new culture wars — he convinced Breitbart upper management to give him his own section. And for four months, he helped Bannon wage what the Breitbart boss called in emails to staff “#war.” It was a war, fought story by story, against the perceived forces of liberal activism on every conceivable battleground in American life.”

Something was wrong in the sentiment of the articles and I’d learned to trust my instincts in a career investigating criminals so, it was time to start to look at the situation dispassionately.

Running a simple analysis to identify language patterns and visualise the general content of the article, I produced word clouds. 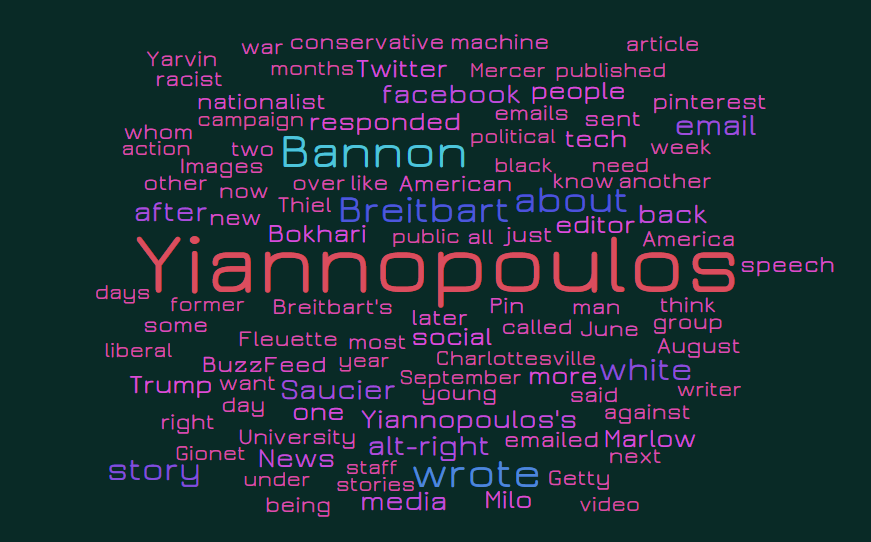 The Bernstein article showed no real signs of negative association with white supremacy, confirming my initial gut response from reading it.

Re-running the analysis with the Regnery article produced a similar result. 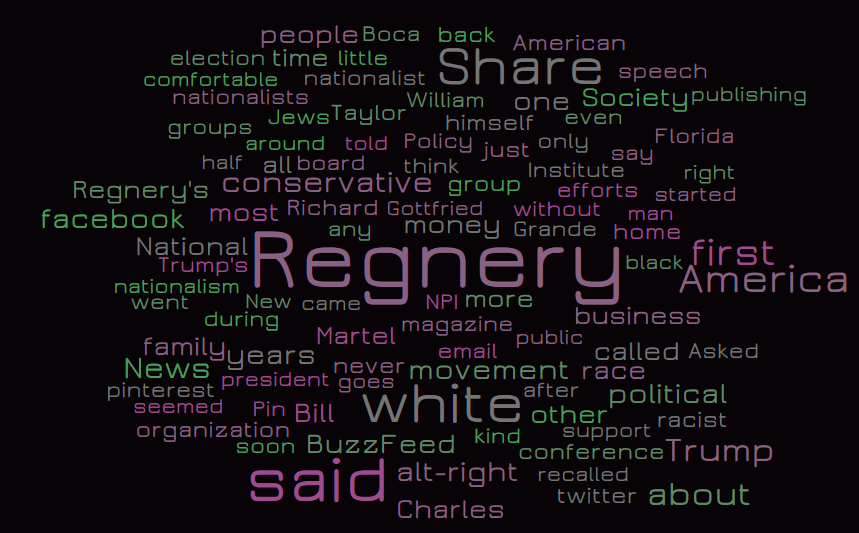 However, I needed to disconnect from my own interpretation altogether, and delved into the world of sentiment analysis tools.

Initially, the Bernstein article seemed to show an overall negative sentiment, based on the full text of the article. 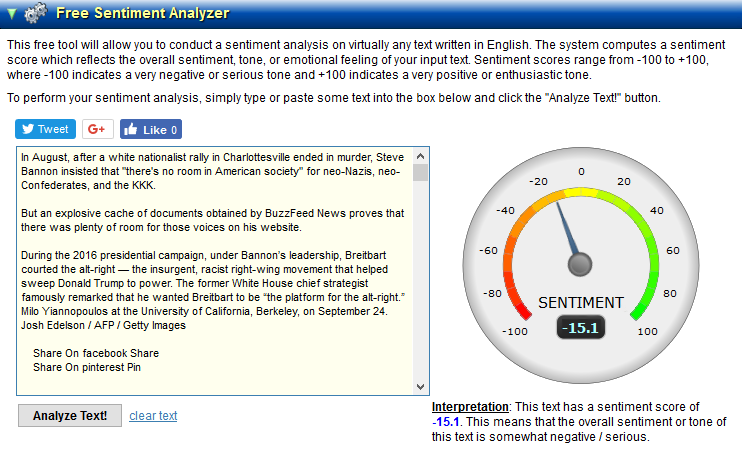 The Regnery article also appeared to be neutral on a full analysis. 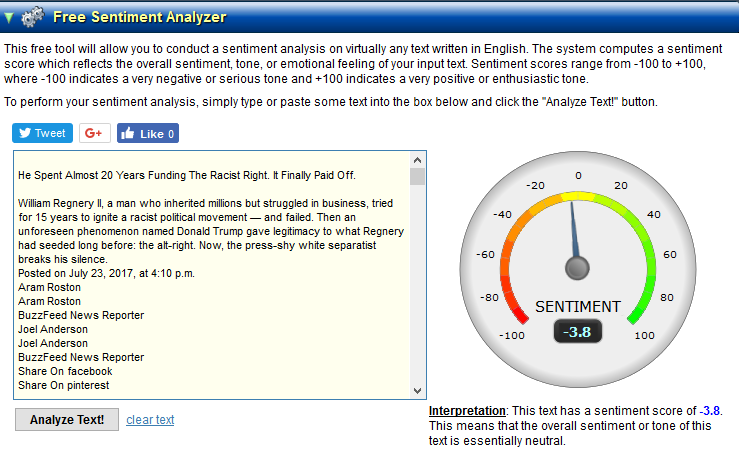 However, by breaking the articles down into segments a very different picture emerged.

The sentiment in the passages where the authors were writing about the white supremacists were overwhelmingly positive, such as in this segment from the Regnery article: 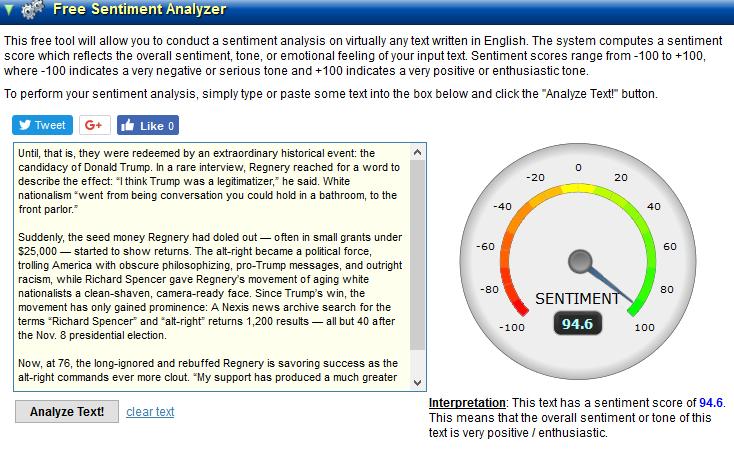 Or this segment from Bernstein’s article: 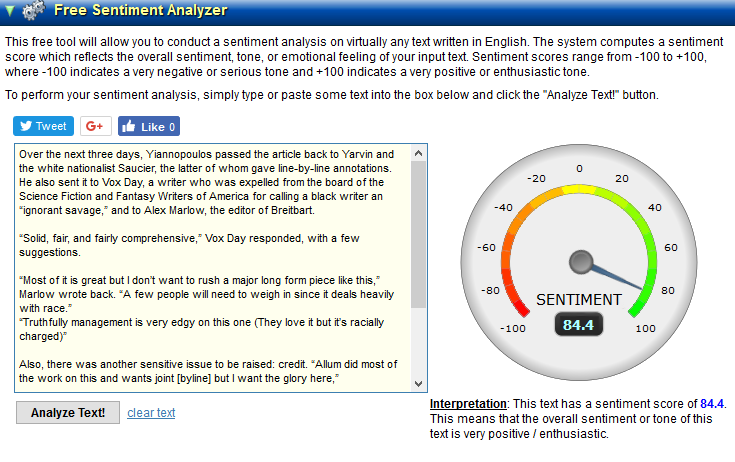 The bulk of negative segment, in particular in the Bernstein article, came purely from the quoted interactions of the white supremacists themselves, such as in this segment quoting an exchange between Bannon and Milo: 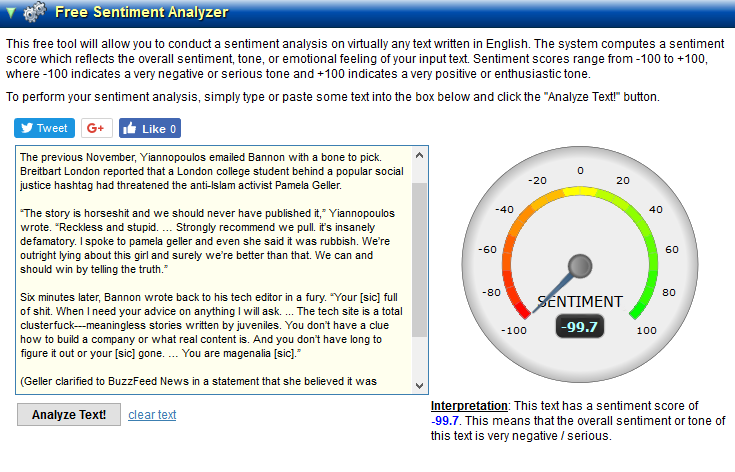 This paints a deeply disturbing picture and confirmed my gut instinct: Buzzfeed have been, whether inadvertently or otherwise, normalising white supremacists and sharing this with a huge audience.

This presents a significant and obvious problem, which was picked up almost immediately on Twitter.

The Overton Window, in essence, measures the shift in what is acceptable in public discourse and Buzzfeed have been shifting the once unthinkable – the protrayal of white supremacists in a positive light – into what’s popular.

That’s not responsible. It is an abdication writ large and, in the simplest terms, the result of writing sympathetic articles about white supremacists produces this result:

The challenge for the media going forwards is to adapt the work it does at every level.

The challenge to society is to learn the importance of not only checking facts but checking sentiment, to ensure they aren’t helping to drive public debate further in the wrong direction.

Buzzfeed have some soul searching to do. We all do.