Crime and Lies: How Trump and the Right-wing Media Are Deceiving The Public

Aside from a trip to Mexico last year and an investigation in Sweden this spring, I stay as far away from anything to do with policing as possible these days. I’m retired, you see.

But the last couple of days has left me annoyed. Miffed, even.

The mangled apricot hell-beast temporarily occupying the White House tweeted this about crime in the United Kingdom.

And, despite the fact he appears to have taken his information from a known disinformation channel, the degenerate rag which used to be The Telegraph has pitched in. 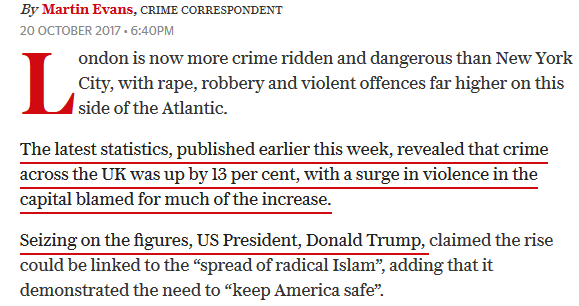 There’s a reason the levels of crime in the UK have have increased over the last few years. A reason rape, robbery, and violent crime have gone up in London.

That reason is me.

I’m white. And I’m neither a Muslim nor an immigrant.

The truth of what’s going on with British crime rates is simply that, in 2013, I sparked a parliamentary inquiry into crime statistics, exposing how police forces up and down the country had been artificially reducing crime for at least 30 years. How they’d been failing to record or even deleting serious offences to keep them off the books.

At the time I was working for Scotland Yard and the Metropolitan Police was the worst offender.

As an immediate result of the inquiry, Police Recorded Crime was stripped of its status as an official National Statistic, the ‘targets culture’ was abolished at a national level, and the British Crime Survey was castigated for its own failures in estimating crime accurately.

During the hearing in which I gave extensive evidence, the Public Administration Select Committee even apologised to policing for their part in pressurising the police to show crime going down.

The person who had presided over the failed culture, the Home Secretary, is now the Prime Minister, Theresa May.

Since then, a lot has changed.

Nationally, police forces were compelled to overhaul the way they record and investigate crime, which has seen the rates go up. But this doesn’t mean crime has increased, just that the figures now reflect the reality which was always there, rather than the wet dreams of commanding officers and their once precious performance score cards.

The crime survey also enhanced its methods and now includes areas which it once left out, including fraud.

The full report is no secret, it’s a matter of permanent public record.

The truth about crime is Trump lied.

He has no concept of what he is talking about, choosing to react to disinformation and spurious sources instead of the vast resources at his disposal as the President of the United States.

The Telegraph is not exempt either.

They know the truth damned well: they reported extensively on the inquiry, part of which covered the fact the NYPD had been caught “gaming the system” too, along with a number of other major US forces. (I recommend reading the book by Eli Silverman on this.)

Ironically, part of the problem generated by policing hiding the figures for three decades was how this was used to justify extensive reductions to budgets and resources by Theresa May.

The rewards of this are now being reaped, as police forces struggle to do their jobs with less officers, less money, increasing poverty, and heightened social tensions. They can’t now prevent what they were preventing before and officers feel stretched.

I was actually disciplined by the Metropolitan Police for raising these concerns in the lead up to the inquiry and resigned afterwards due to my treatment, but the truth came out in the committee session too.

I said: “The worst thing and the saddest realisation for me — I spent the whole of last year defending the police service, to a degree, from the oncoming reforms and politicisation of the police, because I feel very passionately about public service and how it should be un-interfered with — was that, effectively, the police had done it to themselves by spoon-feeding parliament with misleading figures.”

I suppose I’m responding the question posed at the very end of my memoir, The Rest Is Silence.

“For the most part I’ve stayed out of it. Policing. Ran from it, even. Because it took a huge toll on me and my life in general but, I guess, there always comes a time when you need to look your past in the face and acknowledge who you truly are. And life has since told me I can’t ever set this down. It’s part of me and won’t bloody lie still quietly or leave.

I’m still the wrong person to pick a fight with. Always will be.

The only inevitable question, I suppose, is what on earth is an awkward sod like me going to do next?”

It seems calling out the deceit of a US President and a national newspaper is one part of the answer.

The rise in crime is not down to Muslims. It’s down to me and Theresa May, and thirty years of lies by senior officers.

I’m not really built for retirement.