Following investigations for Byline Media, I sent a full statement to world authorities, including the EU, UK Parliament, and the FBI, in May this year.

In that evidence the far-right’s global network, including our very own Leave.EU and Bannon’s Breitbart, were outed as Russian assets.

Along with them was Kremlin sock-puppet Julian Assange.

Not long after this, Nigel Farage was confirmed as a person of interest in the FBI’s Russia probe.

The statement was condensed to 70 pages, but the full story is much longer and was released in August as the book Alternative War.

Since the original statement, the evidence has been confirmed and re-confirmed almost daily.

But what does this kind of network look like in action?

The answer lies in Catalonia. 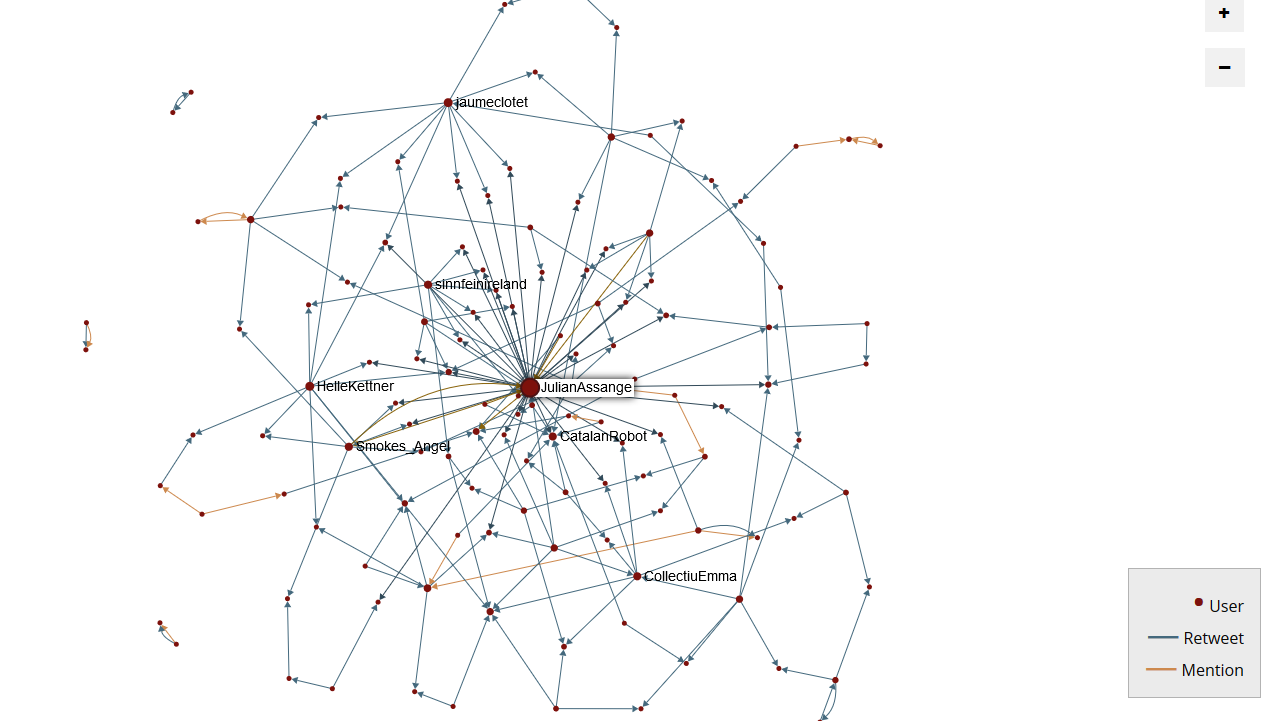 This is a visualisation of social media posts with the tag #Catalonia posted between the 1st and 22nd of October 2017.

They do not centre around any figures from the Spanish or Catalan parliaments, or other local activists. Rather, the social media posts centre around Julian Assange, a man living under diplomatic protection from rape allegations in London’s Ecuadorian embassy.

But perhaps it is simply because he is famous though? (I know you are asking).

What you need to understand first is that this disinformation campaign by Assange is aimed not primarily at Spain internally, but at the international audience. And his centrality is key in understanding this.

We already know disinformation surrounding Catalonia is a Kremlin-Led operation, aimed at further destabilising the EU and, by proxy, NATO. And this is further confirmed by this new analysis.

Even by simply re-running the OSoMe analytics on the domestic tag #Catalunya, Assange’s positioning becomes less important, confirming what he is doing is not for the Spanish or Catalan people. It’s for everybody else. 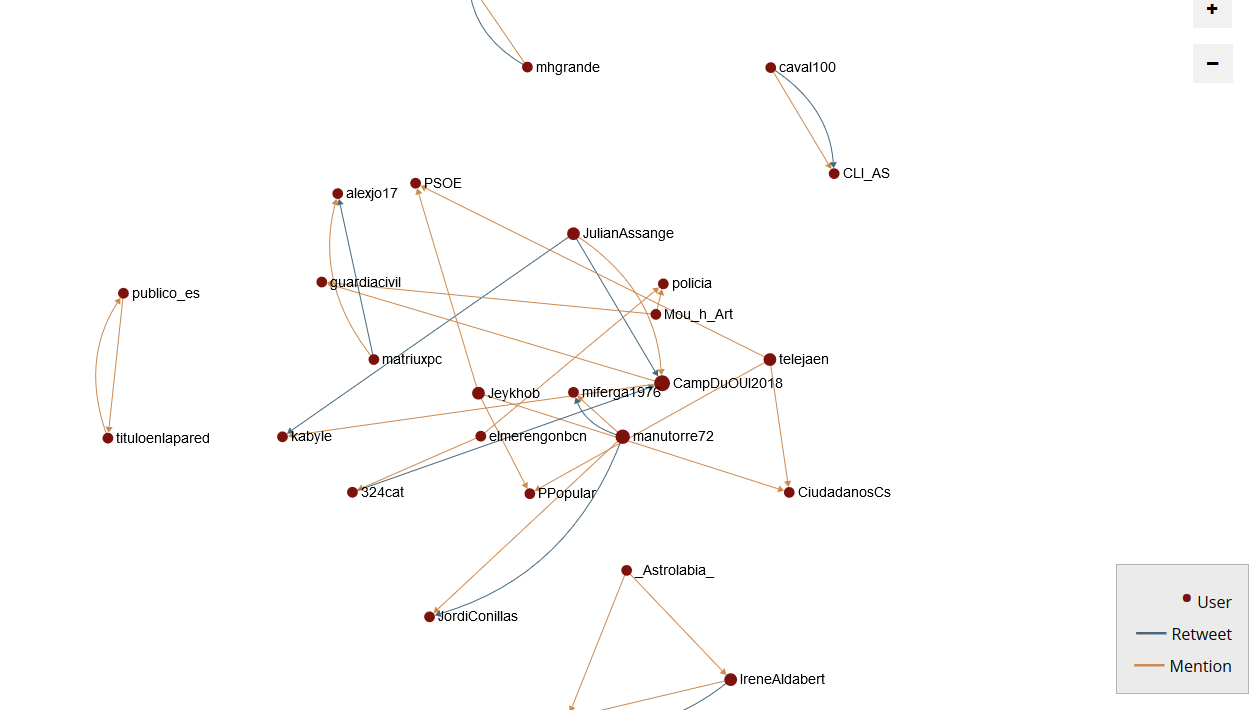 The domestic data shows a much more natural state of affairs in the social media discussions, confirming that what we are seeing from outside is a more focused disinformation campaign. Activity designed to drive a foreign narrative, provoking seperatism elsewhere.

Which makes sense because we know his Kremlin asset partners, including Nigel Farage and Arron Banks, are aiming at the same goal.

Assange’s active deployment becomes even clearer when you convert the analysis into moving images:

To show how unusual the pattern of a deliberate and targeted disinformation campaign is, compared to normal patterns of news-spread across social networks, I ran the same analysis, over the same dates, using North Korea as the tag.

The result is markedly different and clearly shows what global news-spread looks like without the concentrated deployment of a Kremlin-tasked asset.

In fact, it more closely resembles the domestic Spanish/Catalan analysis, which hardens the difference between what is genuine and what is overt disinformation.

Importantly, this also allows the similarity in disinformation campaigns across the world to be shown with clarity for the first time.

Taking the North Korea example, one aspect which generated a significant amount of disinformation centred around the use of the tag #Dotard.

Repeating the analysis, again with the same dates, produced this startling result:

This shows what happens to natural news-spread when targeted disinformation is introduced mid-way through a story. The transition is glaring, with Donald Trump at the very centre.

What this means is that Assange and Trump are both using almost identical methods in disinformation campaigning, further linking both men to Putin’s Kremlin and its mechanisms.

But this link does not end with simple network centrality.

The alt-right disinformation channels also linked to Russia – including Breitbart and InfoWars – have pitched in to the external narrative creation around Catalonia, supporting Assange in carrying out what is clear Kremlin tasking.

This analysis confrms they are working together, on the same deployments, at the same times, with the same objectives.

Namely, in the case of Catalonia, to further destabilise the EU by creating lasting chaos.

Putin himself has dropped nicely into this fray, blaming the EU too. In essence repeating exactly the same narrative his assets have been pushing. 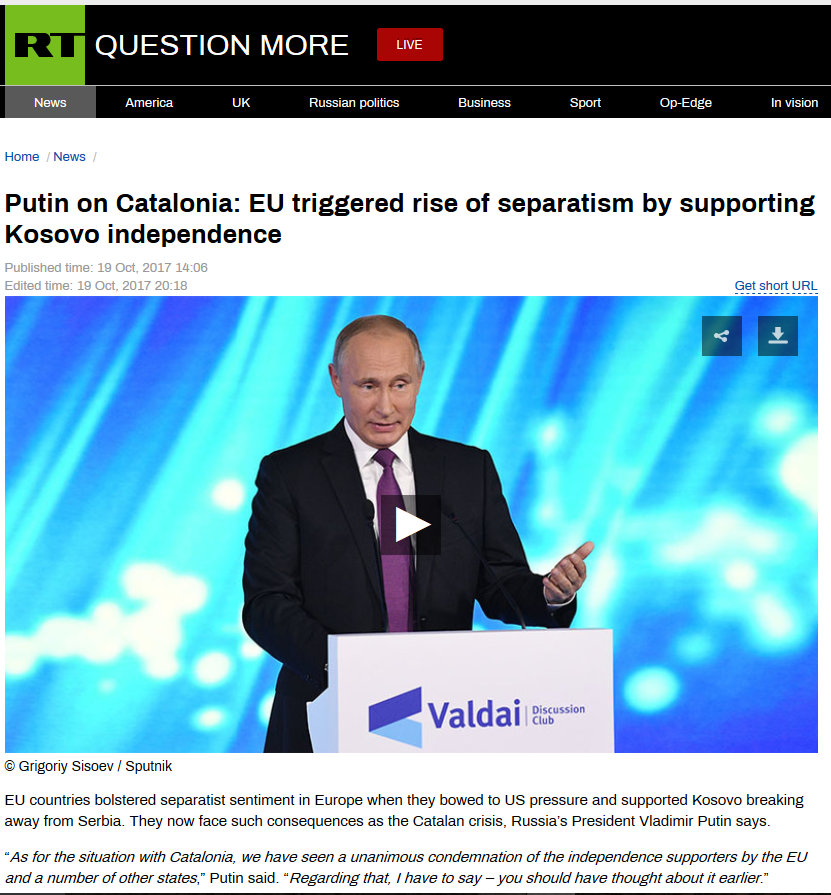 But Putin isn’t being honest.

Separatism has been exploited by the Kremlin just as much as the far-right has.

Back in 2015, figures from Catalonia were among his star guests at the Moscow Separatists Conference, funded by Putin’s regime.

Thanks to Julian Assange, we know a lot more today about the extent and functionality of Russia’s disinformation machine than we did even yesterday.