Exposed By Bots: How Trump And Brexit Work As One

One the key revelations of the last few weeks has been paid advertising on social media platforms by Russia.

$100,000 dollars was spent on targeted, psychographic advertising on Facebook, an as yet undisclosed amount on Twitter – though they actively sought sales from RT too – and Cambridge Analtyica have just spent a $330,000 budget targeting a blockade of Qatar which helped seal Russia’s air defence and supply deal.

(We only know about the latter because Trump’s data firm was forced to make a foreign agents registration retrospectively to comply with US law).

We also know that one of the St Petersburg troll farms had a specific targeted US advertising budget of $200,000 on top of their operating budget, thanks to a whistleblower.

These might not seem like huge amounts if we set them against what we think we know about the cost of traditional advertising but, with the last article in the #LoveBomb series due out this week, the true capability of paid reach is about to be laid bare.

For that kind of money you could reach almost every person on Social Media in the US, UK, and beyond with whatever message you saw fit, even segmenting them and changing tack depending on who you were aiming for. Initial academic analysis confirms this part of the science.

Paid advertising is the thin end of the wedge. Off the books we have an extensive problem.

The easiest way to explain the function of the botnet is to describe it as money laundering, but for social engineering.

This is where the importance of bots and trolls versus paid advertising comes in: they are doing the same thing, but only one has official records to turn over.

“The easiest way to explain the function of the botnet is to describe it as money laundering, but for social engineering.”

The botnet works on the basis that people are talking, whether it be about conspiracy theories, their cats, or otherwise. That’s base level functionality.

Where they are pushing conspiracy theory, some people take them seriously while others, like me, rip into them. But this is where something called Network Centrality comes into play – basically it means getting into your social network with a message to extend its reach by any means. Talking about it is talking about it.

That way, more people hear it and this is how trends are created – trends which are now an integral part of the creation of news. News then creates more social media activity and the botnet amplifies it once again.

This is how even the most spurious of fake news stories are spread and step out of social networks and into real life discussions. This is how fake news became part of daily public discourse. This is how people make decisions they might not otherwise.

The problem is, botnets aren’t really carrying fun messages, – which is often all that’s left in terms of evidence after the bots are deleted or repurposed. And yes, I count myself among the people who have unwittingly been “left behind.”

https://twitter.com/J_amesp/status/924764287972921348p>In fact, the botnet uses popular trends (or even ones they’ve created) alongside less benign messaging, such as the disinformation planted with the paid advertising.

The activity is specifically timed too – to coincide with or help mute an event, such as an indictment, or around an election or a vote, such as Brexit or the US Presidential race of 2016, or France, or Germany, etc.

Bots are, in essence, unattributable and officially unrecorded signal amplifiers and very effective ones too.

They serve their purpose and then we’re left with some real tweets to mull over and the damage caused is obfuscated. So, when you retrospectively look, you see only remnants of a trend or a campaign.

But some of the data around the dual purposing lingers aswell, because we can assess what was being discussed co-concurrently, e.g. Pens & Vote Leave.

“Bots are, in essence, unattributable and officially unrecorded signal amplifiers and very effective ones too.”

We’ve come a long way past the point where making light of the bot problem was an appropriate response, yet there remains a huge amount of misunderstanding and often denial of the problem.

Apologies to those who are beyond this entry-level, elementary breakdown of the botnet, but this is the simplest possible explanation of how all this works:

For some this will be way too stripped back an explanation, but everyone needs to understand this. It’s no good just the data nerds having a grip on the topic.

Hand in hand with knowing the basics comes the neccessity to understand that your name appearing in trace evidence does not mean you are a bot, just that you interacted with a bot-led activity which was exploiting Network Centrality.

The principle is exactly the same as in any forensic investigation, there are issues of contamination and elimination.

For example, the use a pen stuff first appeared during Scotland’s 2014 independence referendum. Some believed there was a genuine conspiracy to stop Scotland becoming independent, while others used the tag to mock.

Interestingly, as an aside, Russia had already moved into Edinburgh with Sputnik by the time of the referendum and RT had been courting politicians too.

By the time Brexit came, the innocuous sounding pens topic was used in another way: by a network of externally based bots pushing disinformation messages in tandem, 13,000 of which disappeared after they served a purpose, having pushed at least 65,000 messages into our social networks.

Because of the analysis in a previous article, we now know trace evidence also proves bots were deleted and subsequent commentary helps identify some of the accounts.

As previously, we see in this the relevant activity was focused on amplification of the messaging at the UKIP end of the Leave spectrum.

real, did impact on public discourse, and the activity is forensically

“It’s the same problem Mafia investigations faced until the introduction

of laws like RICO: a lack of appropriate measures are in place to stop

the problem. Only the stakes are much higher.”

One of the key problems we face, however, is that the US Senate and the UK Select Committee are both focusing their efforts around the records of paid advertising.

It’s the same problem Mafia investigations crumbled against until the introduction of laws like RICO: a lack of appropriate measures are in place to stop the problem. Only the stakes are much higher.

The problem of the botnet has been known about officially for a long time. And though Alternative War is a detailed source on the origins of this kind of Hybrid Warfare and our knowledge of it, other evidence does exist.

For example, the Washington Post’s recording of Paul Ryan and others neatly explains how advanced the operations are. 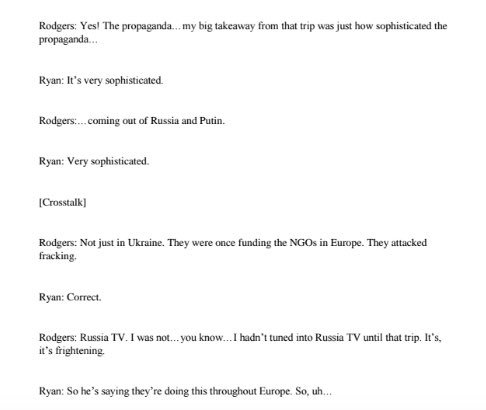 We also know Julian Assange has become a central figure in botnet activity around Catalonia too, driving messaging for the external audience rather than the domestic. He also, of course, has links to the Trump campaign and the Leave.EU campaign, and is appearing on Russian state TV supporting an anti-Clinton narrative.

Interestingly, a brief analysis of Assange’s recent patterns of social media use reveal a curiosity.

This is a very odd coincidence for a man focused on EU issues where the time zone is GMT+1. 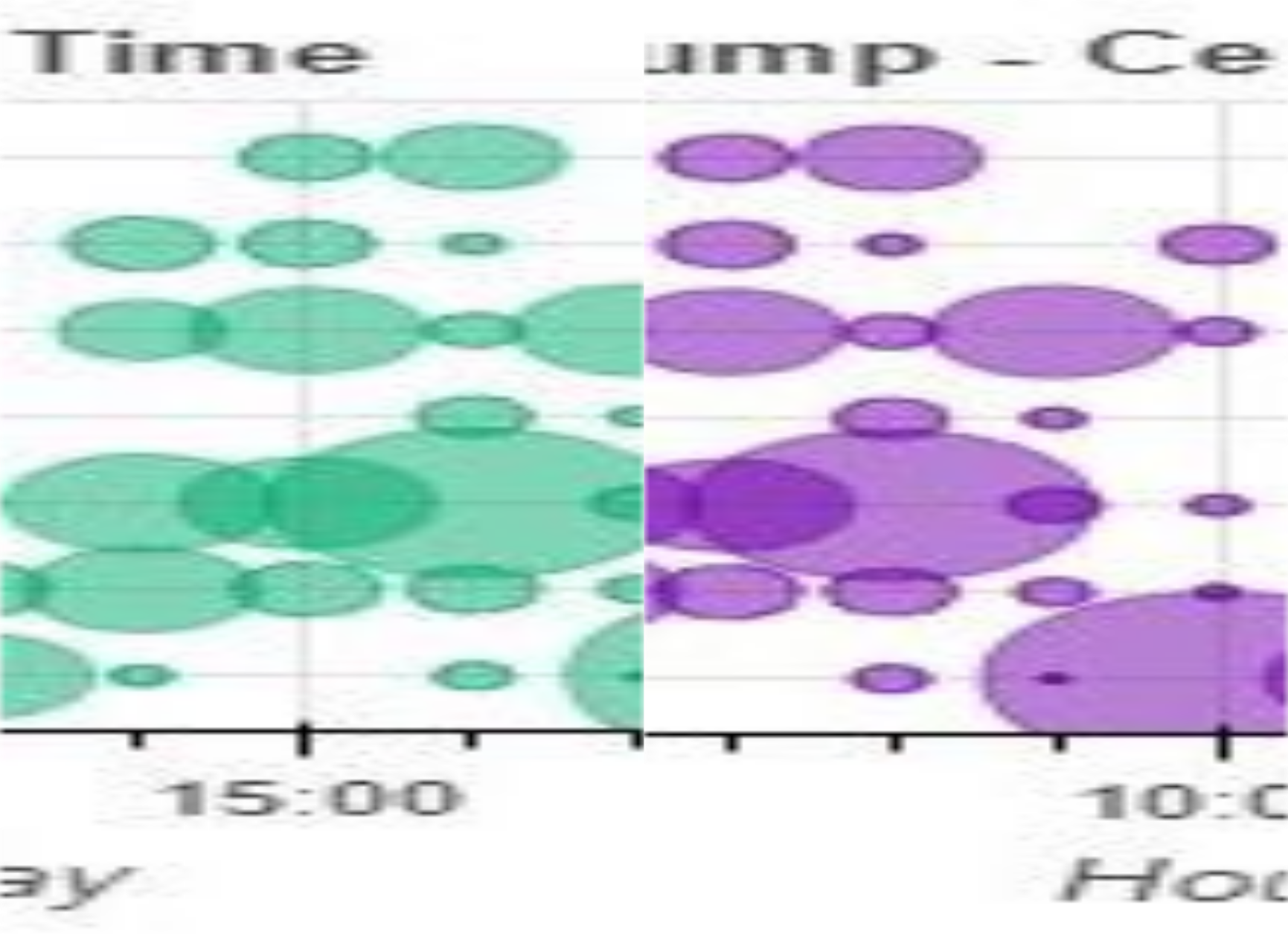 Bizarrely, having tweeted about this, I found the strongest respondents were Momentum trolls, apparently huge Assange fans.

“This led to a further analysis of both the Brexit botnet and US botnets together, which produced quite startling results.”

As analysis has continued, we now know the botnet deployed in the US is more extensive than that used in the UK, but only because of population density. It’s proportionate.

The activity of the network has also become easier to identify and examine.

As the previously reported Uranium One story developed, with the number of fake news stories becoming more frequent, the distribution shifted away from InfoWars only, as new bots were brought online and new networks centrality targeted. 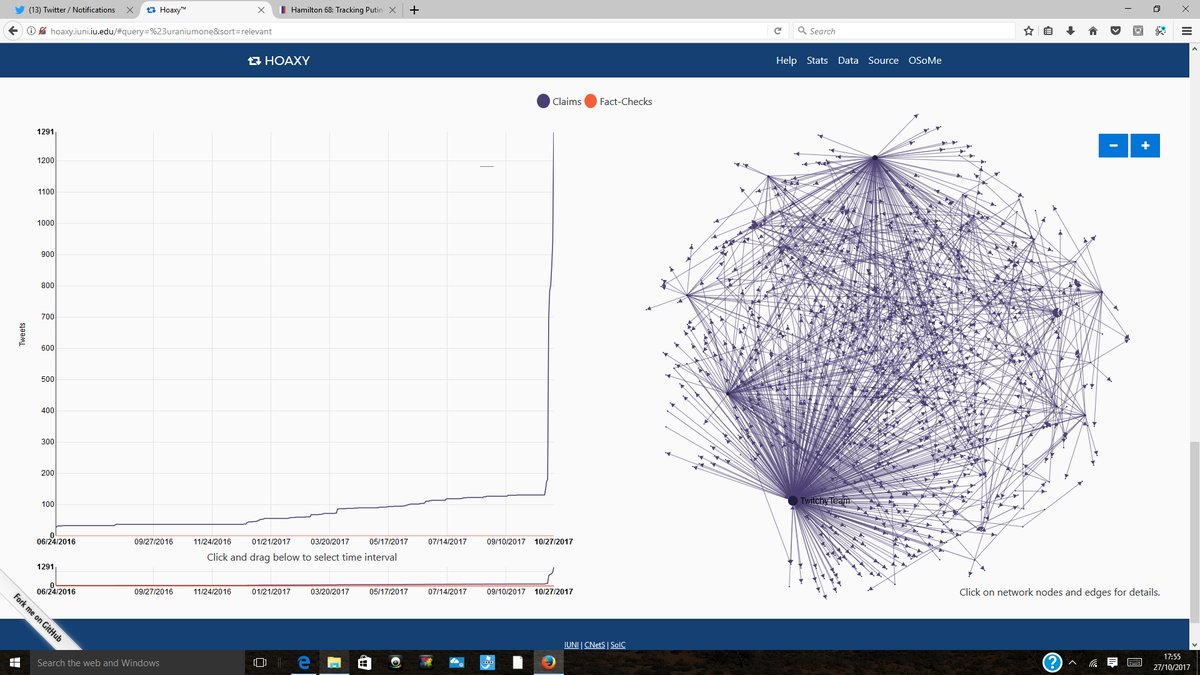 Across many of the accounts, the message grew and was pushed by both legitimate and illegitimate sources, just in the same way as the pen conspiracy was around Brexit. 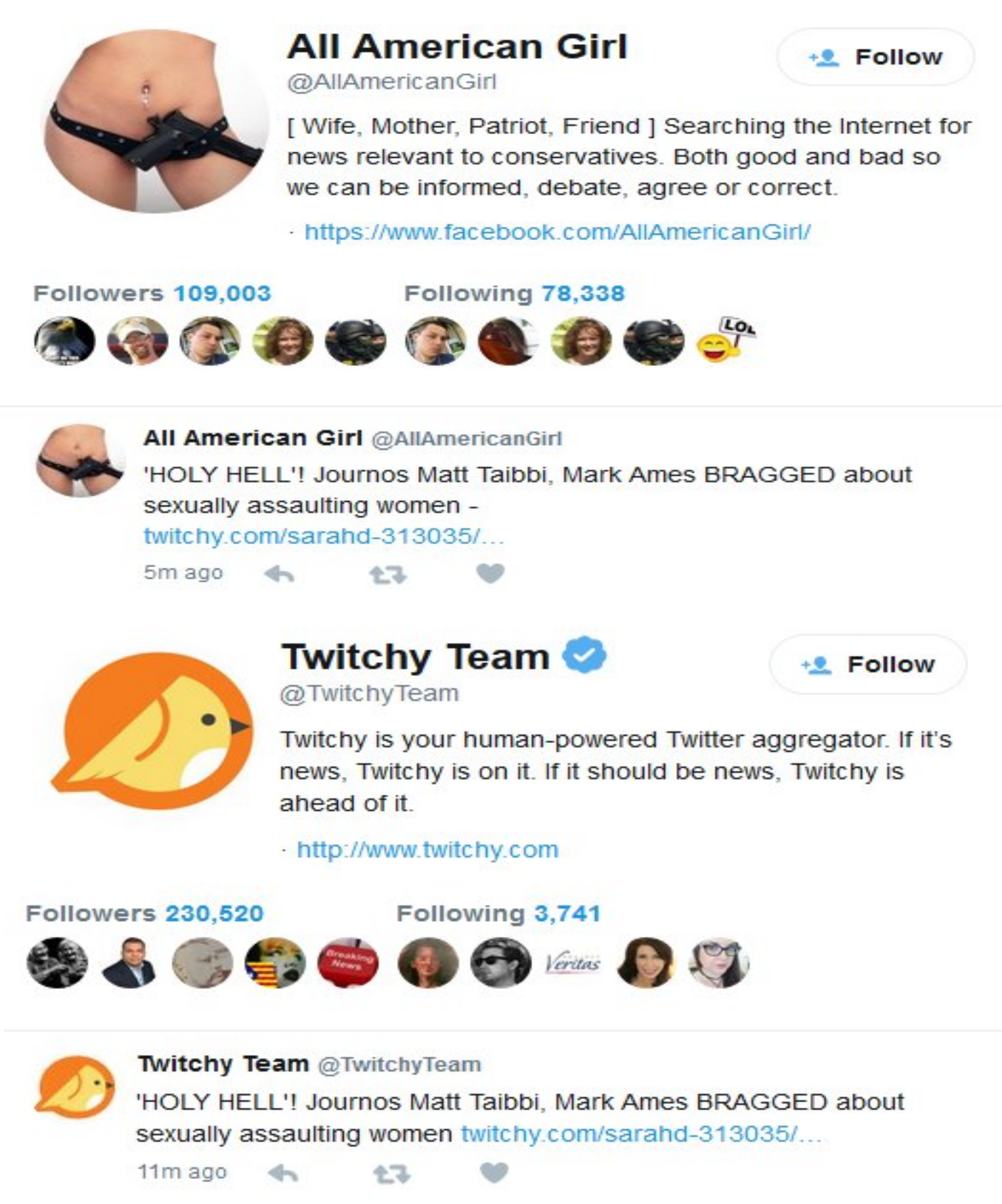 What became visibile was the transfer or repurposing of the botnet, as they aligned to amplify one message over another. The MAGA botnet saw a decline in “volume” while the Uranium One tasking escalated, and this resulted in a shift in trends, placing the latter first in the rankings. 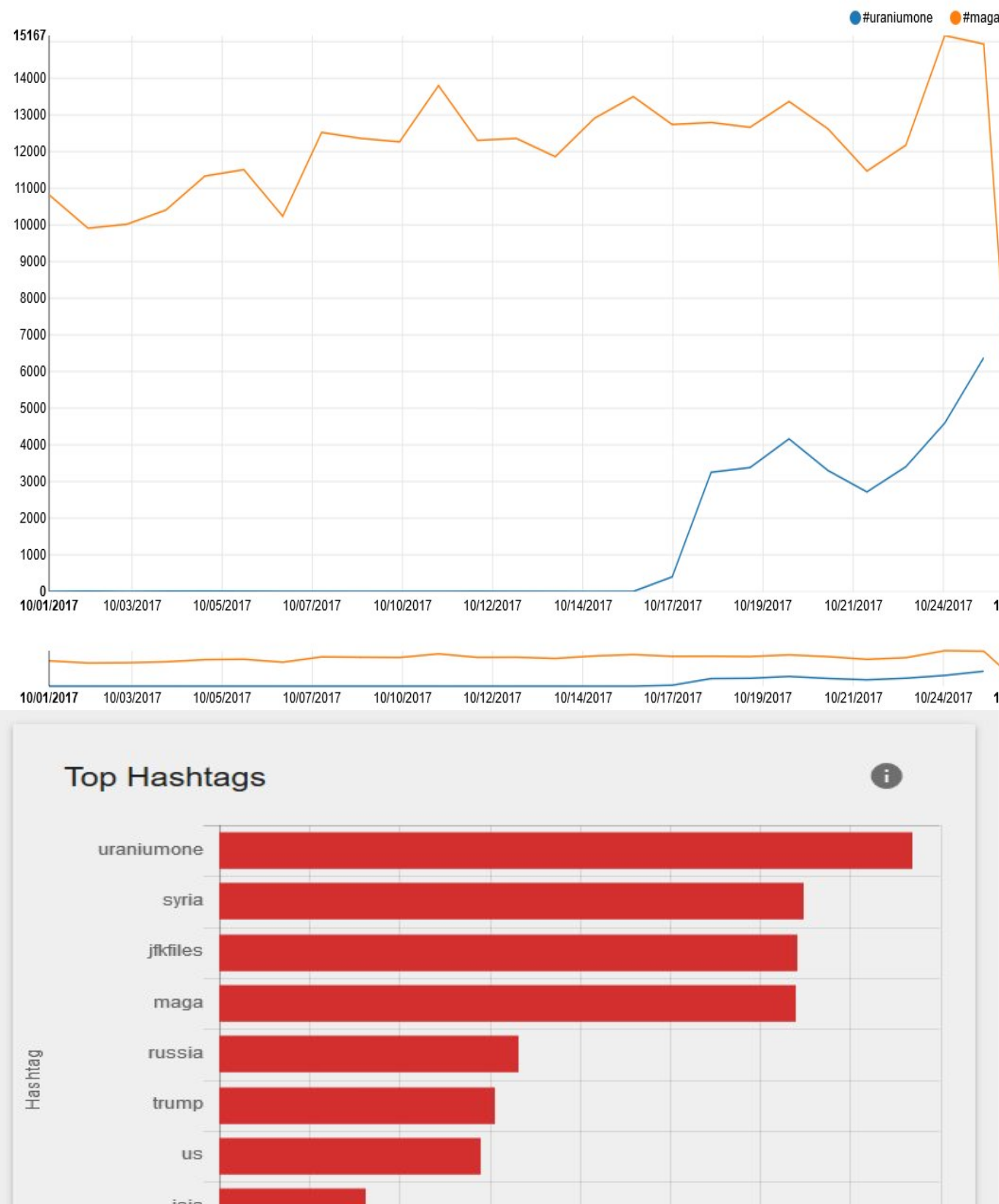 This led to a further analysis of both the Brexit botnet and US botnets together, which produced quite startling results.

“Since the analysis was completed, UKIP whistleblowers have come forward, claiming the political party was being directly paid by Breitbart.”

The initial search parameters were for fake news items on the tag Brexit, taking the most recent into account. The result produced a list of alternative media articles. 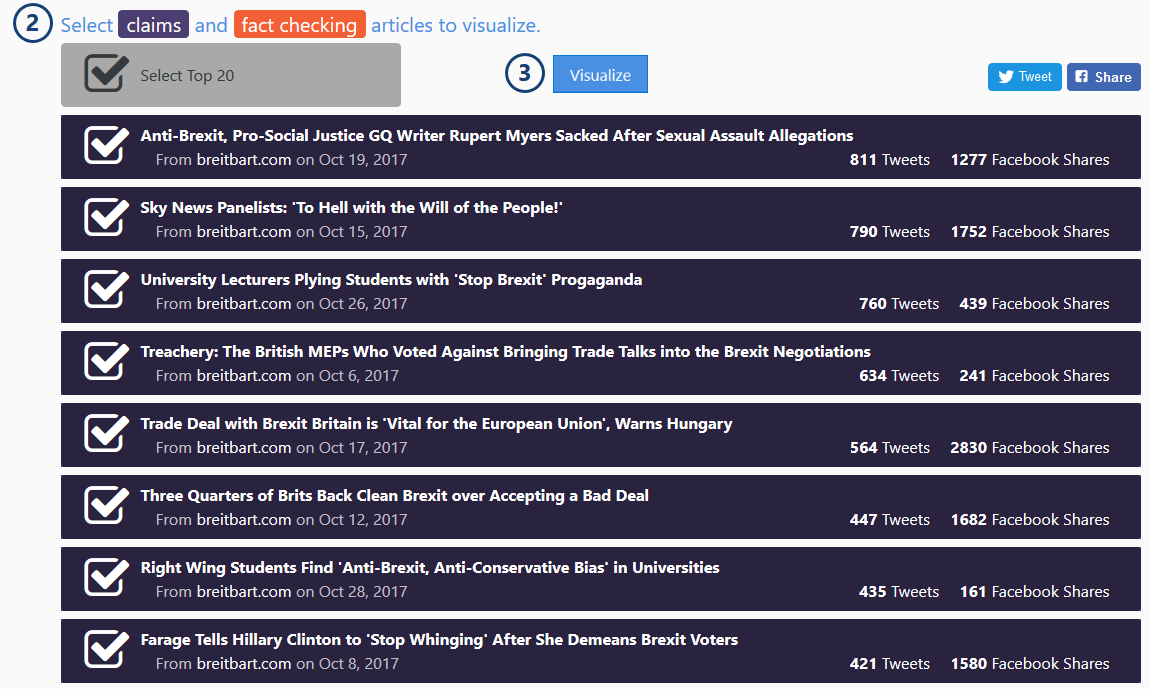 Visualising the data showed a steady but exponential increase in the volume of articles, peaking at the current time.

It also sets out the central figures pushing these stories, namely Jack Montgomery – former Leave.EU comms lead and now working editorial at Breitbart London – and Paul Joseph Watson, who makes conspiracy YouTube videos for InfoWars. The latter is based somewhere in Battersea and was recently endorsed by Farage, Banks, and Westmonster. 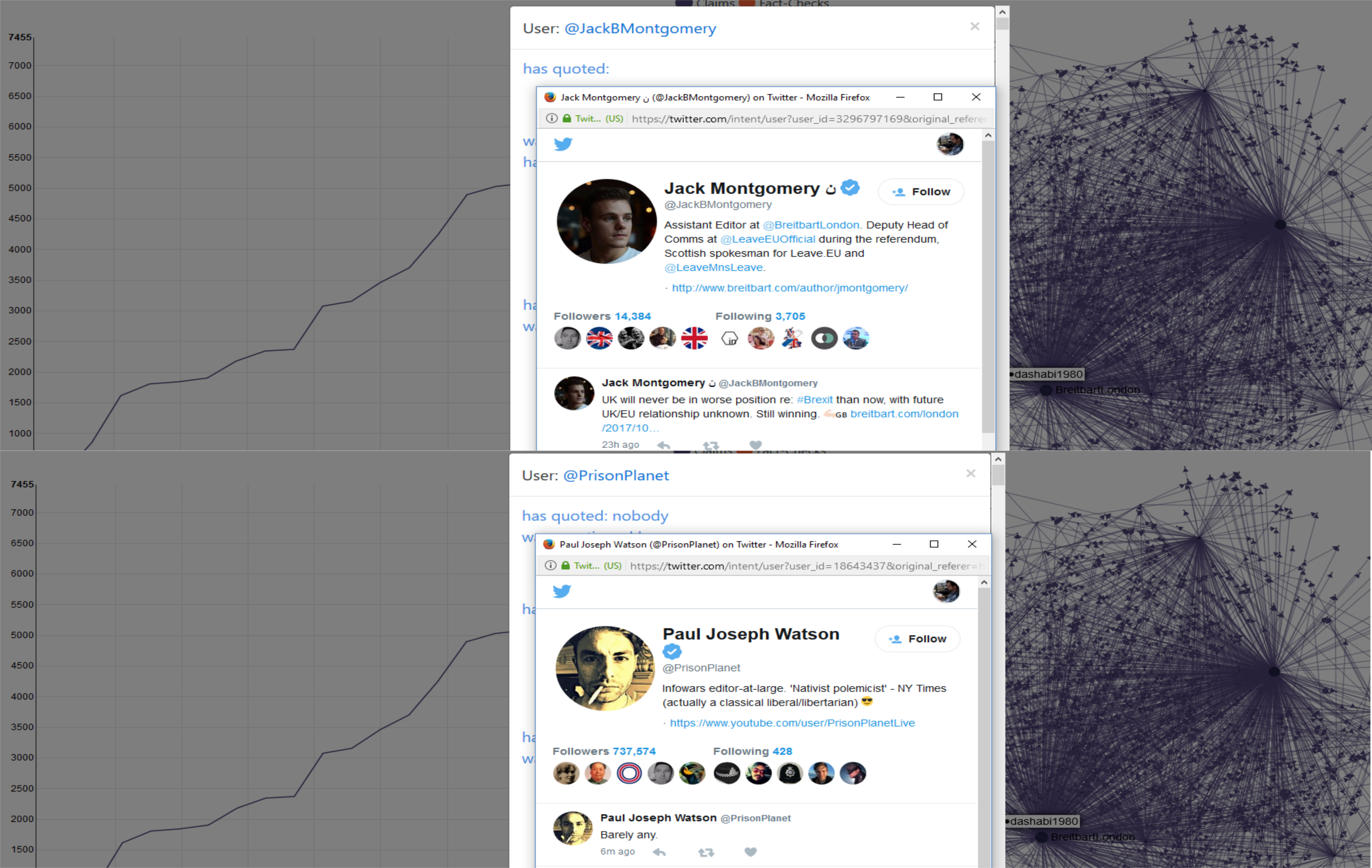 The search parameters are not geographical, but the articles being centred UK outlets and figures was expected.

However, running the search on article permeation rather than using recency produces a wholly different – and unexpected – picture. 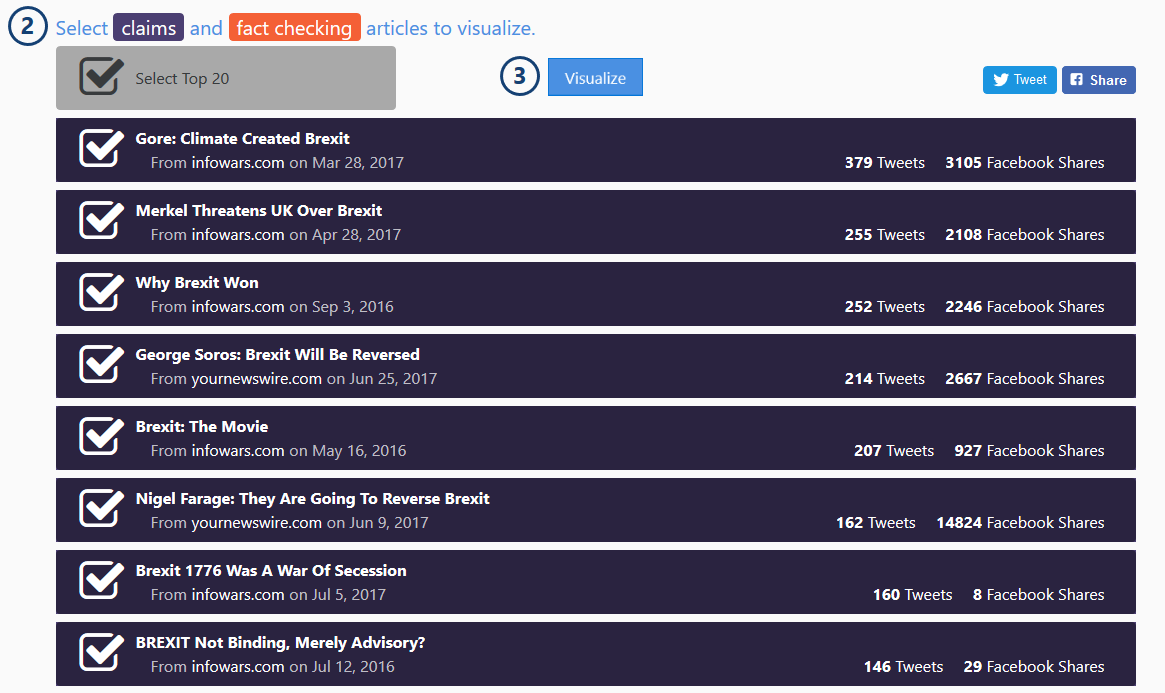 The visualisation is also different. Firstly, it shows a stepped increase over time, again peaking recently, but suggesting efforts being deliberately scaled up through decision making at key points.

Secondly, over time, the most prolific sources of Brexit fake news overall are US based InfoWars and Alex Jones himself, dwarfing all other Brexit content and spread. 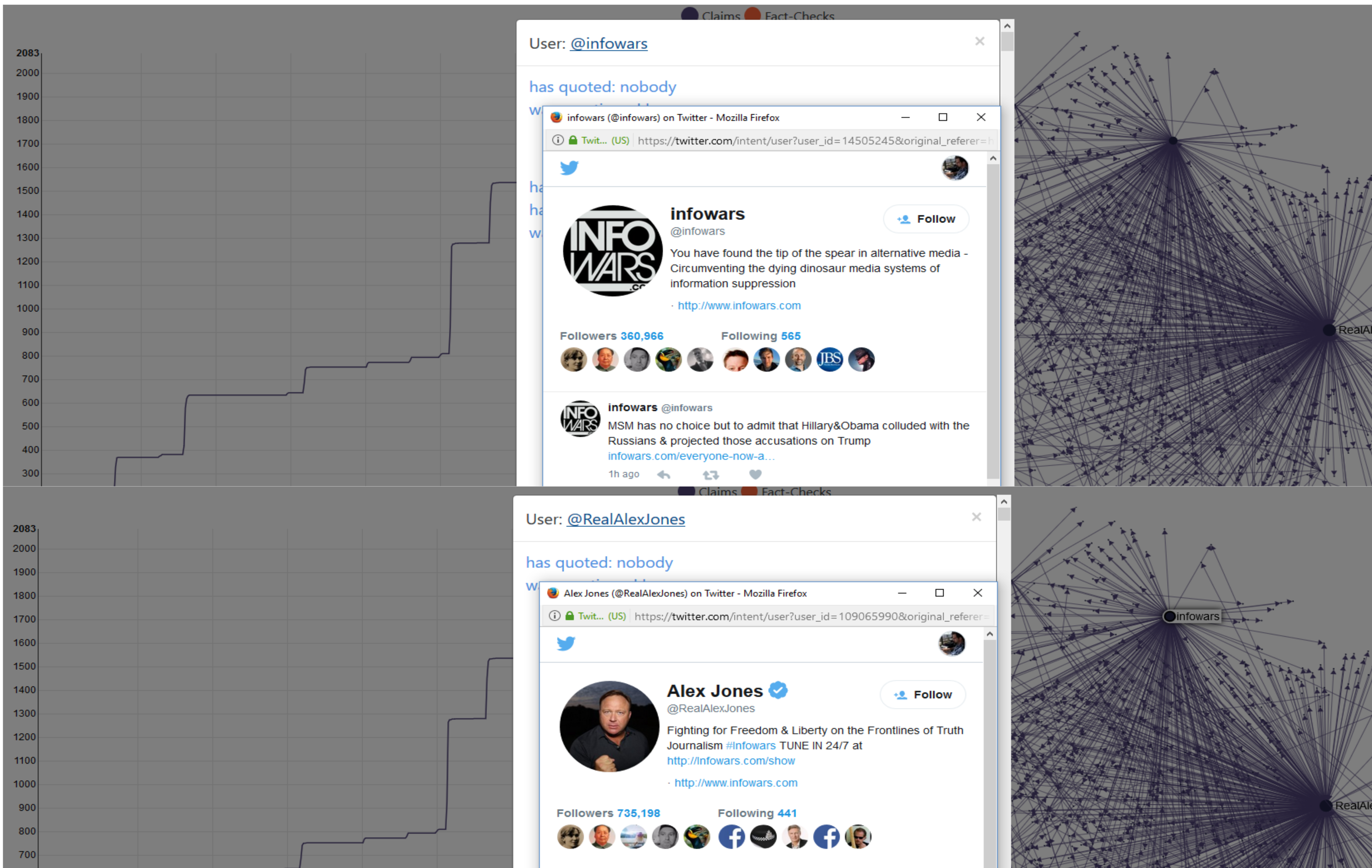 The next stage in the analysis was to establish what was being discussed co-concurrently along with Brexit and this allowed the extract of pertinent tags for comparison with known US botnet topics, as well an revealing an unhealthy looking hub of activity around RT. 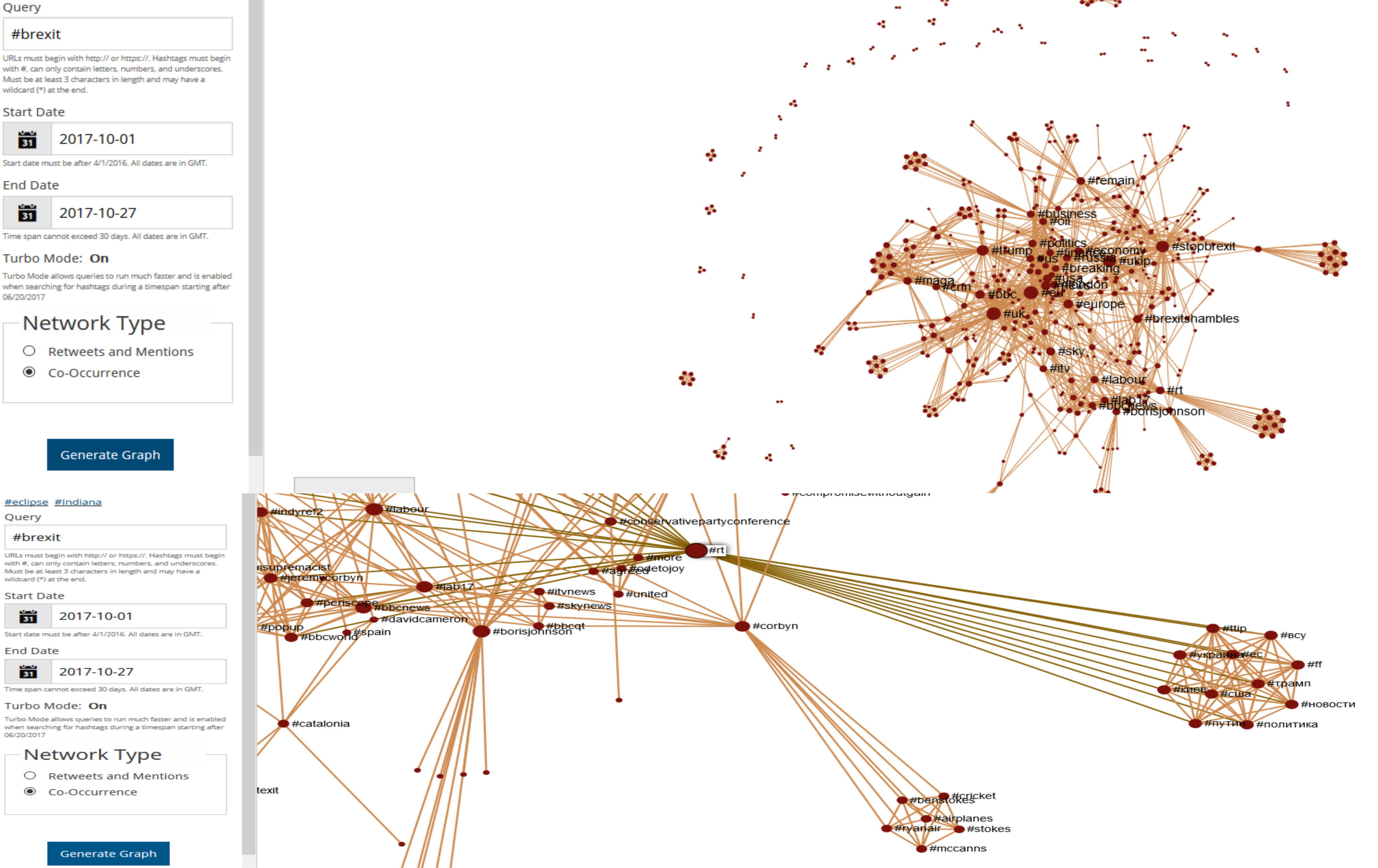 Placing all of the known, major botnet topics into one trend analysis for the month of October 2017 produced a result which warranted a more intrusive analysis. 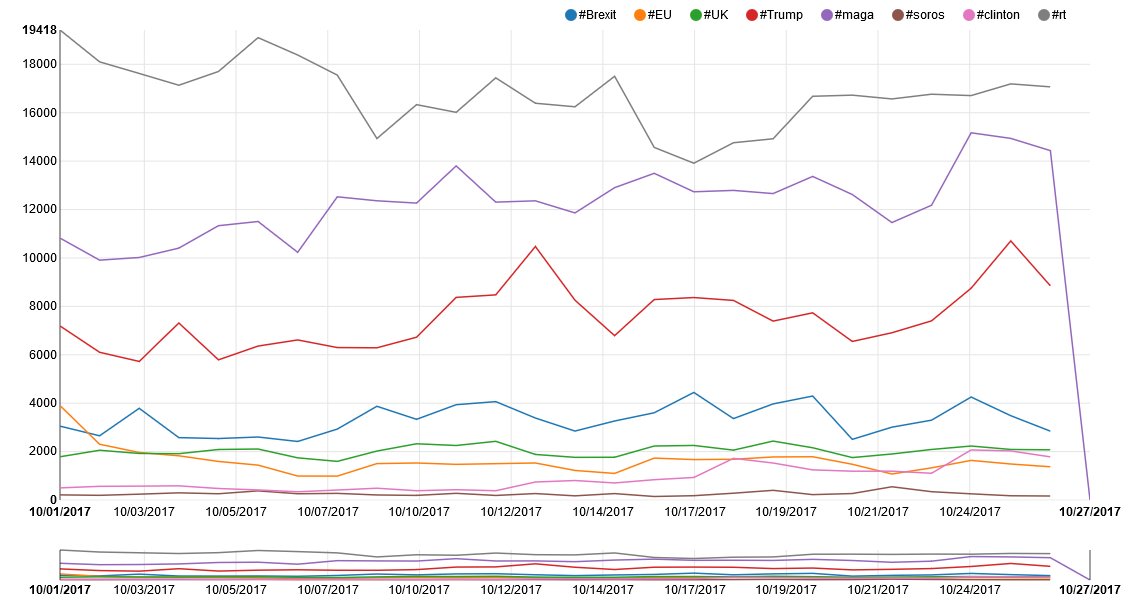 Three of the tags in use showed an impossible correlation which means the topics are being used by Brexit, Trump, and Maga botnets all at once. 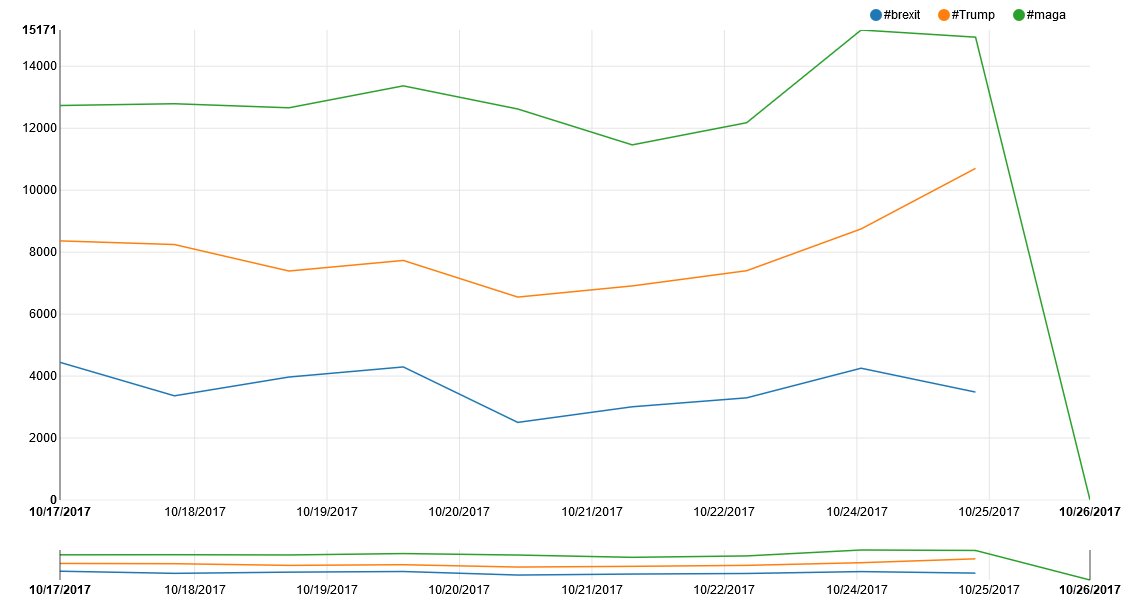 Zooming in further, narrowing the date range, the precise pattern is undeniable. 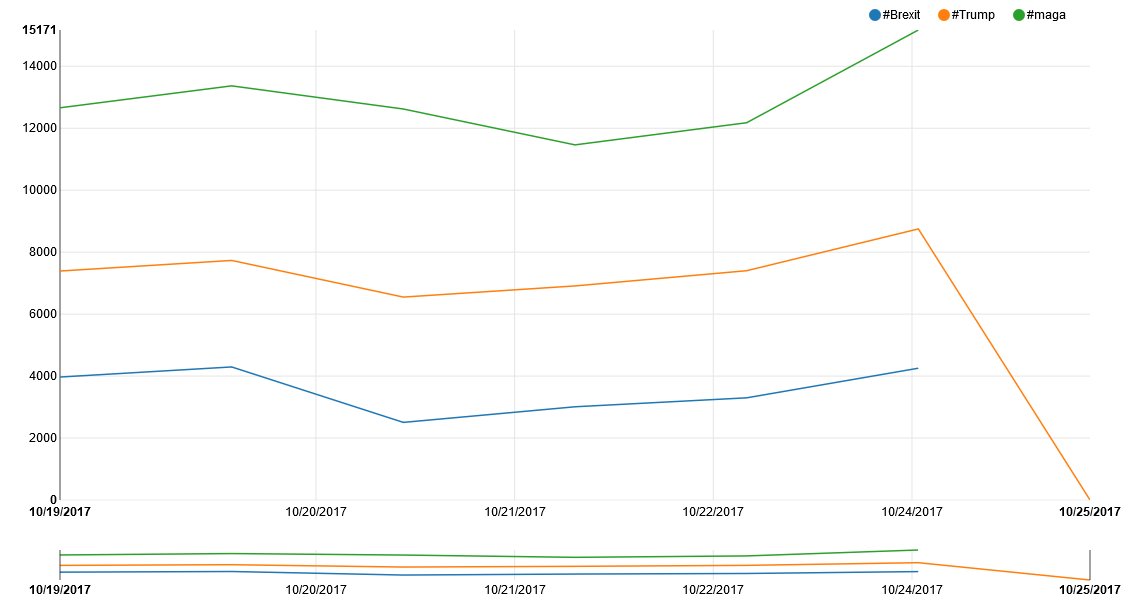 Because the analysis already completed showed the repurposing of Trump bots to Uranium One, it was added to narrow date range analysis.

The result was quite incredible. 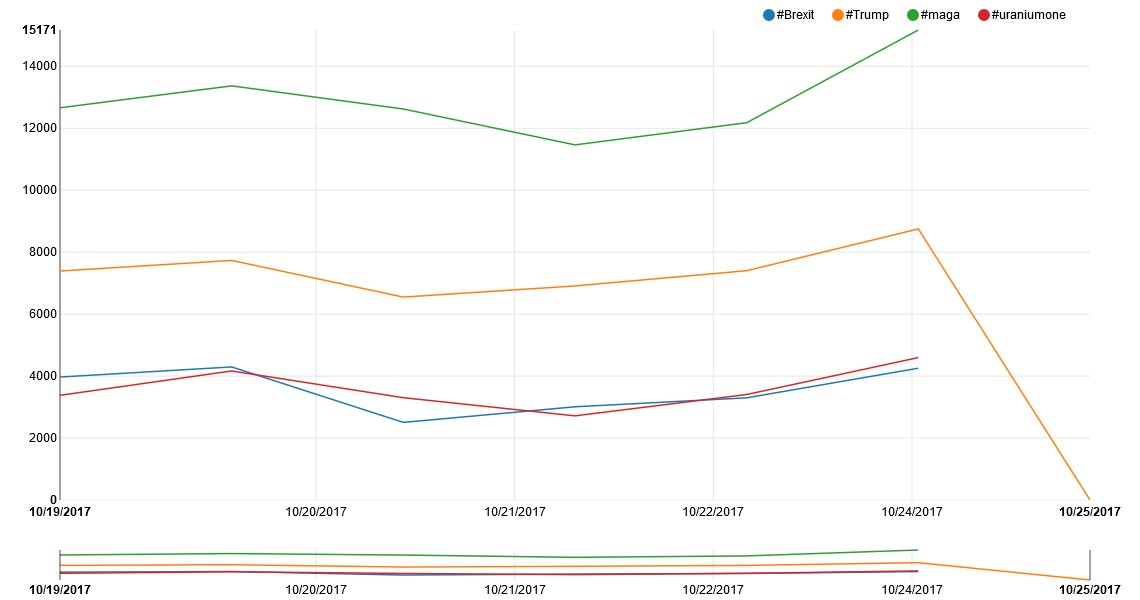 The Brexit botnet is definitively shown to be working in tandem with Trump’s.

All of them are working together with InfoWars and Breitbart to spread fake news on both sides of the Atlantic. Fake news which is driving real life responses.

Disinformation campaigns around Trump and Brexit are inseparable and now we know for sure.

in a puff of smoke at any time, leaving only small traces it was ever there.

“This is where the importance of bots and trolls versus paid advertising comes in: they are doing the same thing, but only one has official records to turn over.”

Since this data analysis was completed, UKIP whistleblowers have come forward, claiming the political party was being directly paid by Breitbart to push messages to the British public.

By adding the hashtags Remain and StopBrexit to the analysis, neither of which are linked to botnets, the results look like this: 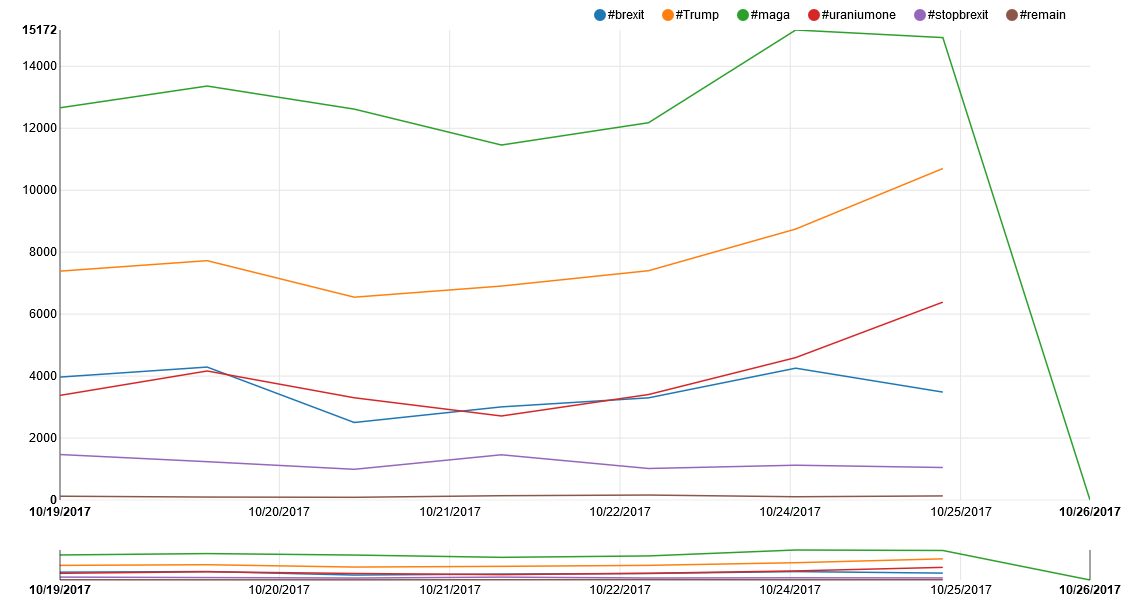