We need to talk about Social Media….

Following the hearing at the US Senate in which Twitter gave evidence, a 65 page list of Russian operative accounts were released. Thousands of aliases were influencing public discourse and producing at least a fifth of all messaging during the Trump election. They are still in operation.

It remains, however, the tip of the Iceberg. And the Olgino Trolls – based at the Kremlin funded Internet Research Agency near St Petersburg – are not the whole story.

Social Media in the UK is infested with automated accounts spreading Russian disinformation, managed trolls accounts, and even some home grown extremists who are thriving within these networks.

This UK network runs hundreds of thousands of accounts deep and we are peering into it for the first time with the assistance of some of the world’s most advanced intelligence and forensic investigation software.

Starting with the basic facts, we know that Olgino is in Russia. We also know this is the base of the Internet Research Agency, hence the term The Olgino Trolls.

Referring to the list of confirmed Olgino Trolls provided to the US Senate by Twitter, one name was randomly selected: Williams_Diana_

While the account has long since been suspended by Twitter, every contact leaves a trace applies as a principle as much in the online world as it does at any crime scene.

Subsequently, an advanced search using Twitter’s own engine, could be used to identify whether this account had involved itself in Brexit during the date range February 1st to September 1st 2016.

By adding the keywords, Brexit, Leave, UK, EU, and Farage, Twitter was able to find a list of interactions between these confirmed Russian agent and others, including Axel Bruns, based in Brisbane, MAGA troll Doc Stuart,  and English user Suzytoo.

Under the Twitter handle @tt_saw, the account – which features London Bridge and poppies in its biographical information – was discussing the murder of MP Jo Cox with Williams on the 17th of June 2016, saying “They don’t no facts & Farage getting blame” in reply to a now deleted tweet by the Russian operator.

One single, random sample from official US list immediately connects the Olgino trolls to Brexit and shows they were operating during the key referendum period in Britain, interacting with British accounts.

Using the publicly available Twitter data and the intelligence software, it was possible to start to piece together a much more detailed picture.

Twitter allocates an allowance of what is referred to as API usage to each user, meaning – with the right tools – the public data on accounts matching alias names, their followers, following, and even what they talk about, can be extracted in bulk for analysis.

The next stage of the analysis was to draw out the list of users the Williams interactor, Suzytoo, follows.

Unlike the permanently suspended Russian operator account, Suzytoo is still active as a user now.

In essence, she follows many of the same character pro-Leave voters do, including Rees-Mogg and Farage. 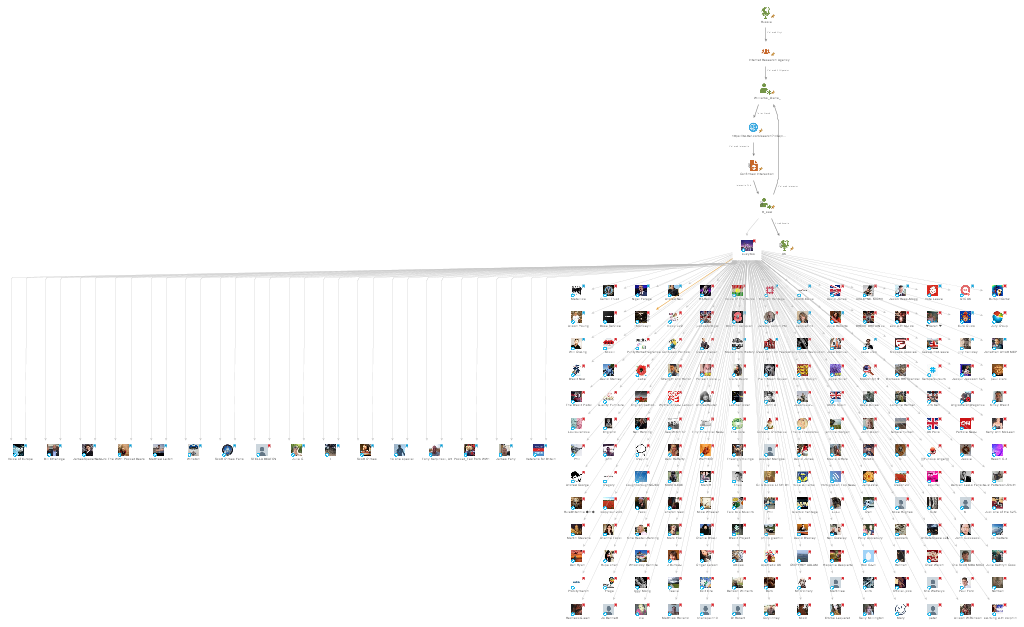