We need to talk about Patriots….

After a single Olgino troll account was used to unravel the Russian involvement in Brexit’s social media activity, and both Wired and CNN published stories exploring the same topic, there was no doubt remaining: Russia was involved directly in Brexit.

Of course, there was no doubt of this and hasn’t been for a long time.

In fact, the threads of Brexit’s social media infestation by Russian trolls has been under increasingly close examination for weeks.

“But what does all of this mean? How bad is the problem? The truth is, it’s just as bad as it could be. British social networks are infested by Russian accounts and they are successfully steering public discourse untenably to the extremes.”

By taking a deeper dive into the inner workings of the American network surrounding Trump and his use of managed propaganda, alongside a much tighter observation of Russian asset Julian Assange and his Catalonia activity, it was possible to to conclude the Russian networks in the US and UK are working in tandem on tasked operations.

Further, due to FARA declarations, it has also been possible to connect the Trump administration and his data firm Cambridge Analytica to the direct support of Russian objectives in Qatar – which has since escalated into a predictable and full-blown crisis affecting the UAE.

But what does all of this mean? How bad is the problem?

The truth is, it’s just as bad as it could be. British social networks are infested by Russian accounts and they are successfully steering public discourse untenably to the extremes.

It’s inevitable really that – as a result and because the latest investigations finished late last night – on Armistice Day there is little choice but to say we need to talk about Patriots.

Firstly, however, it’s neccessary to briefly visit the writings of one Tomas Schuman, who died in 1993.

Schuman was, in fact, Yuri Alexandrovich Bezmenov, a Soviet journalist for RIA Novosti and a former PGU KGB informant who defected to Canada. He began to resent the KGB-sanctioned oppression of intellectuals who dissented from Moscow’s policies while stationed in India and decided to defect to the West.

According to Wikipedia, in 1969 a secret directive of the Central Committee opened a new department in all embassies of the Soviet Union around the world. The covert group was called the “Research and Counter-Propaganda Group” and Bezmenov became a deputy chief. The group gathered intelligence from sources – such as informers and agents – building profiles on nearly all influential or politically significant citizens where they were stationed.

Those who favored the Soviet expansion were brought on board and often promoted to higher positions of power, affluence, and prestige. Those who refused to cooperate, however, were the targets of character assassinations in the media.

“encouraged to recruit people with large followings, the established

Bezmenov has stated that he was: “instructed not to waste time with idealistic leftists,” as they would become “disillusioned, bitter, and adversarial when they realized the true nature of Soviet Communism.”

During that period, increasingly seeing the Soviet system as insidious and ruthless, Bezmenov began careful planning to defect.

He escaped via Athens in 1970, dressing as a Hippie and leaving with a tour group before arriving at the US embassy – where he was debriefied before being granted asylum in Canada.

He then began to write, lecture and broadcast.

His legacy is an understanding of Russian tactics in the world of today. 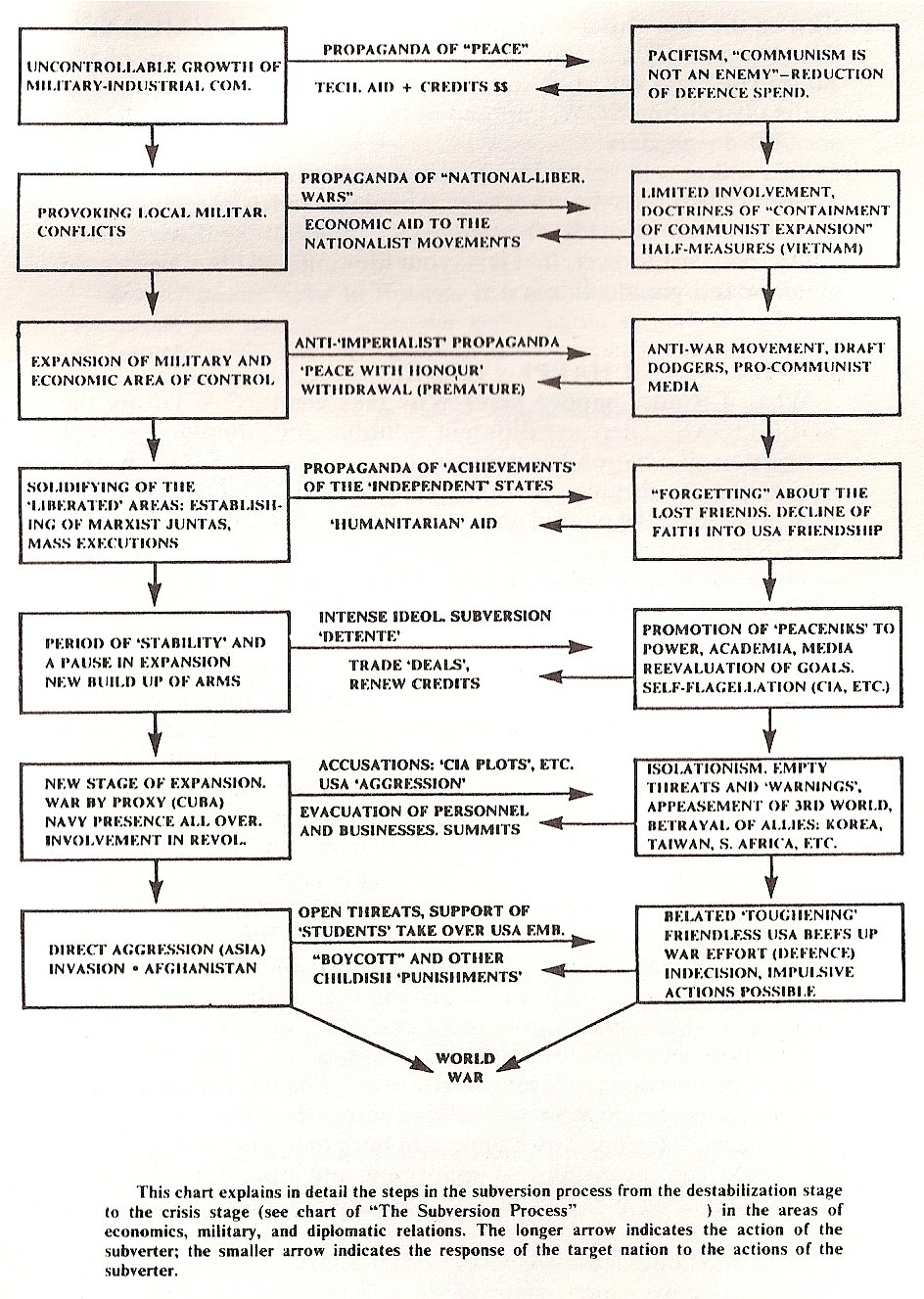 The steps of the subversion process itself are instantly recognisable in 2017: discrediting the media with shouts of Fake News, the rise of RT, pouring salt on alliances which have held peace.

It’s clear that Russia have been playing a very long set piece, insidiously infiltrating Britain as they have gone, and Farage and his associates provide but one studied example. They are, by no stretch of the imagination, patriots.

As Samuel Johnson wrote: “A man sometimes starts up a patriot, only by disseminating

discontent, and propagating reports of secret influence, of

usurpation. This practice is no certain note of patriotism. To

instigate the populace with rage beyond the provocation, is to

suspend publick happiness, if not to destroy it. He is no lover

of his country, that unnecessarily disturbs its peace. Few

errours and few faults of government, can justify an appeal to

the rabble; who ought not to judge of what they cannot

understand, and whose opinions are not propagated by reason, but

This describes Farage’s brand of patriotism precisely and the same can be said of Trump.

“We are now well into the destabilisation process, somewhere around

“Mobocracy,” and false-patriotism flows deep across the infested social

But the set play continues across the spectrum of parties, with MPs taking unrinsed money direct from the Kremlin to provide managed messaging on RT – at the same time enhancing its credibility while other media is decried as false.

RT’s purpose and audience targeting is deliberate. They are, in fact, almost perfectly defined by another of Johnson’s visionary quotes: “If his first or principal application be to the indigent, who

are always inflammable; to the weak, who are naturally

suspicious; to the ignorant, who are easily misled; and to the

prfligate, who have no hope but from mischief and confusion; let

his love of the people be no longer boasted.”

RT is far from a benign entity. It is part of Russia’s foreign apparatus and should always be regarded as such.

“the full analysis found in some groups up to 50% of alleged UK Twitter accounts promoting Leave in June 2016 had been completely deleted.”

Overall, the situation on Social Media in the UK is grim.

We are now well into the destabilisation process, somewhere around “Mobocracy,” and false-patriotism flows deep across the infested social networks.

To understand how we can see this and understand what it means, it is neccessary to briefly step back to June 2016 and, once again, look to social media – combining both the analysis around #UsePens with the newly discovered data on the Olgino Trolls.

A search was built upon basic criteria around one of the most prolific tweeters of leave tags combined with #UsePens and, by scrolling the list for missing tweets, a sample group of accounts was generated.

A number were eliminated straight away due to being live accounts belonging to identifiable people on initial inspection.

Though only one small sample group of fourteen is shown in the above image, the full analysis found in some groups that up to 50% of alleged UK Twitter accounts promoting Leave in June 2016 had been completely deleted. This supports previous academic research which concluded tens of thousands of accounts disappeared after the vote.

“2534 links were discovered between 9,320 accounts, with both David Jones

A number of accounts – often prominent in mentions and driving Leave messaging – such as those shown in amber have been suspended by Twitter. Of those shown suspended in the above sample image, all three are suspected to be attributable to the Olgino troll farm. 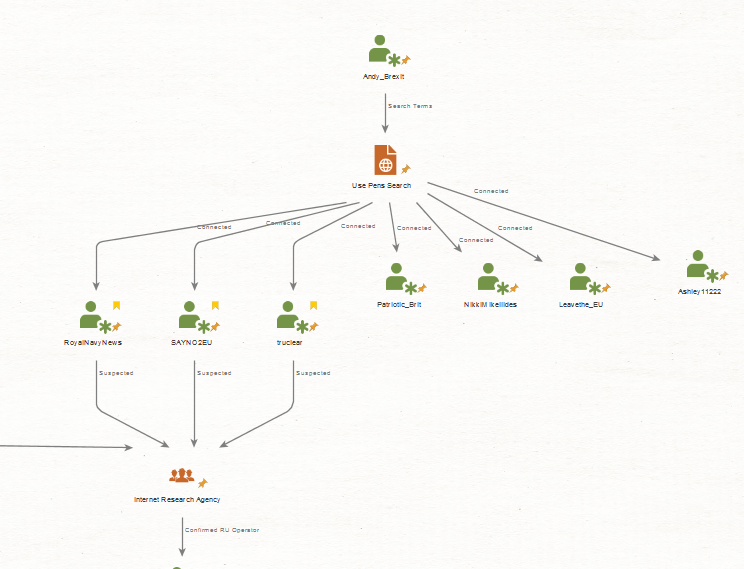 Of the accounts analysed, almost 30% remain live overall, but just over 20% overall are currently dormant, with some tweeting only sporadically – such as Ashley11222 – or others having stopped dead by the end of 2016 – such as Leavethe_EU.

The accounts themselves do not hide their function on closer analysis.

@Leavethe_EU for example is an allegedly US based garbage account which ceased being used on the 31st of December 2016. 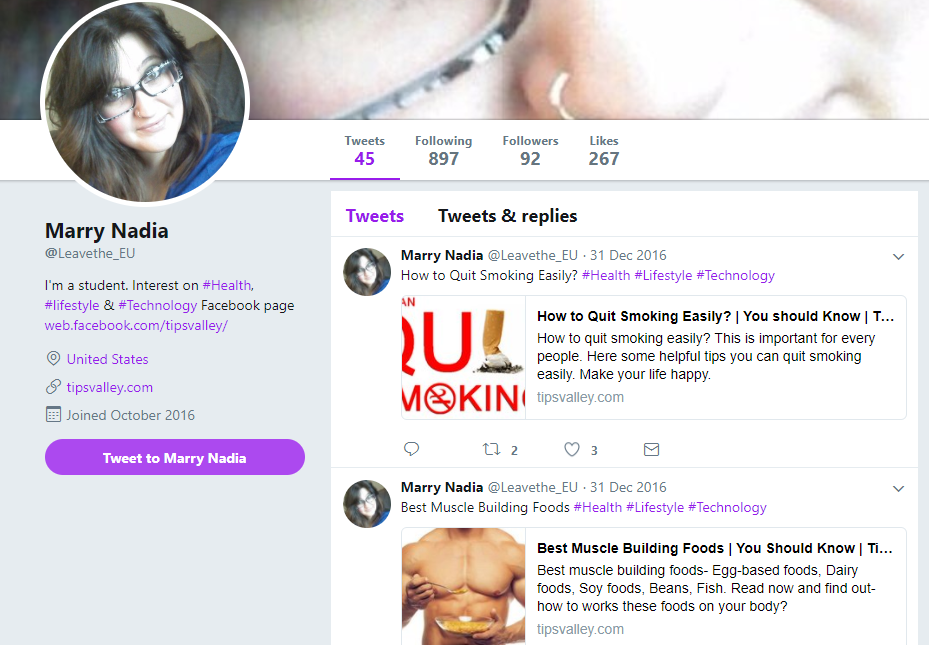 None of the accounts discovered feature in Twitter’s already released list of US-centric Olgino trolls, and their UK specific submission to the Media and Culture Committee is pending.

On a closer analysis, the same sample connected both the previous Olgino research and this new search together, with common names appearing again and again – also revealing an increasing number of deleted accounts (shown in black). 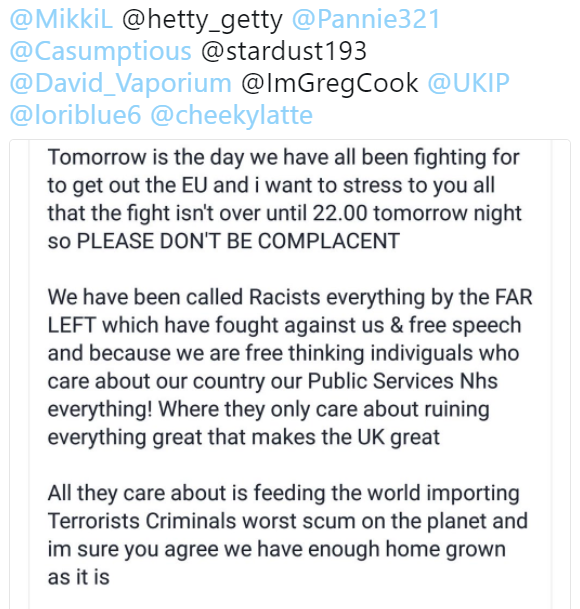 In one round of analysis alone, 8,483 accounts were found to be mutually connected on 10,326 points relating to follower and following data. One of the top 10 aliases for incoming links was established Kremlin troll David Jones (@DavidJoBrexit).

In a further analysis, 2534 links were discovered between 9,320 accounts, with both David Jones and the Internet Research Agency itself featuring in the top 10 for incoming links.

This led into further analysis of freshly identified accounts. 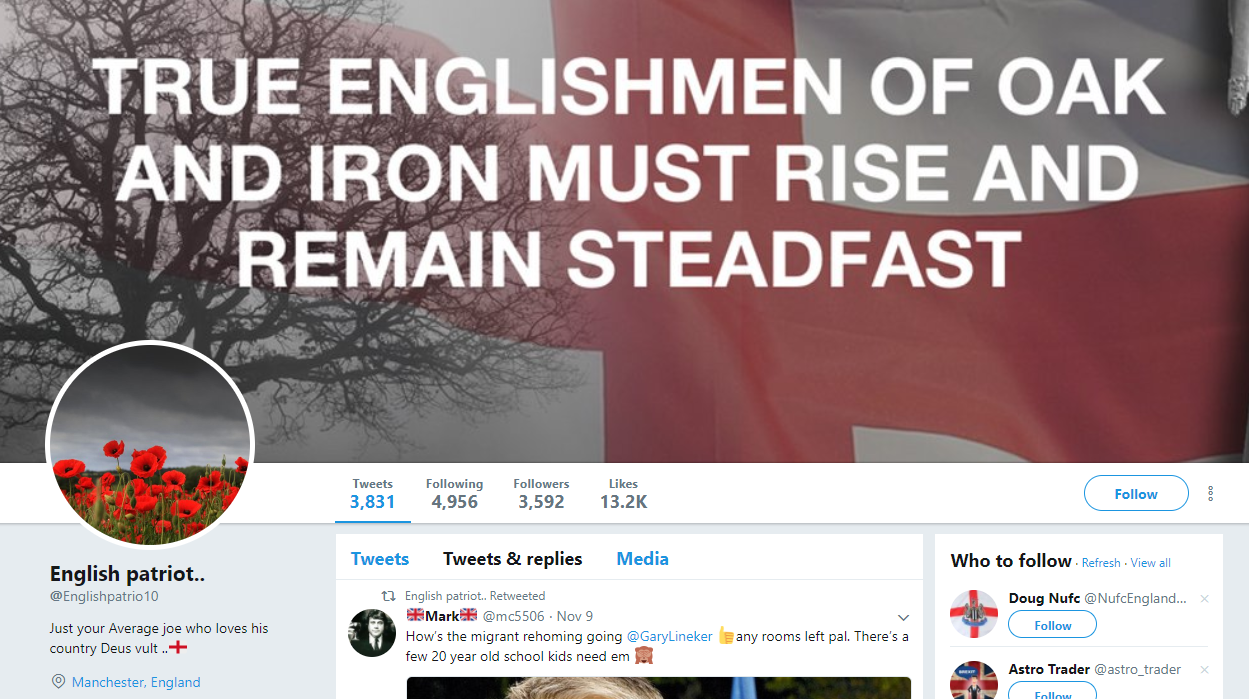 Most telling is the result of a temporal analysis, which indicates the account is actively run 24 hours a day by different handlers. 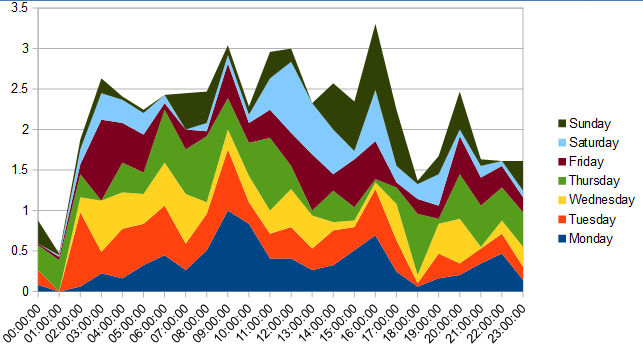 Over time, a human account when analysed shows a sleep gap in activity, such as in this example: 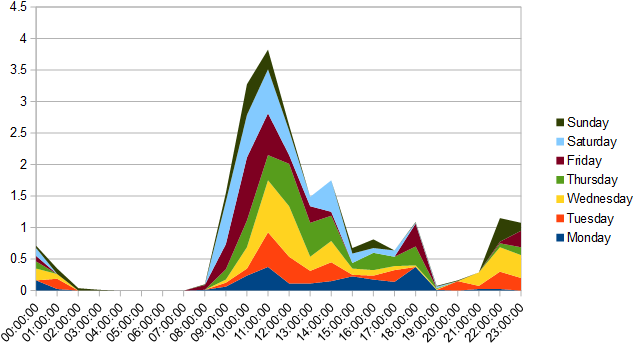 The extensive network of thousands of disappeared, dormant, and active accounts becomes even clearer in its origin and intent when you start to view the content being posted – or which has been posted and left for all to see. 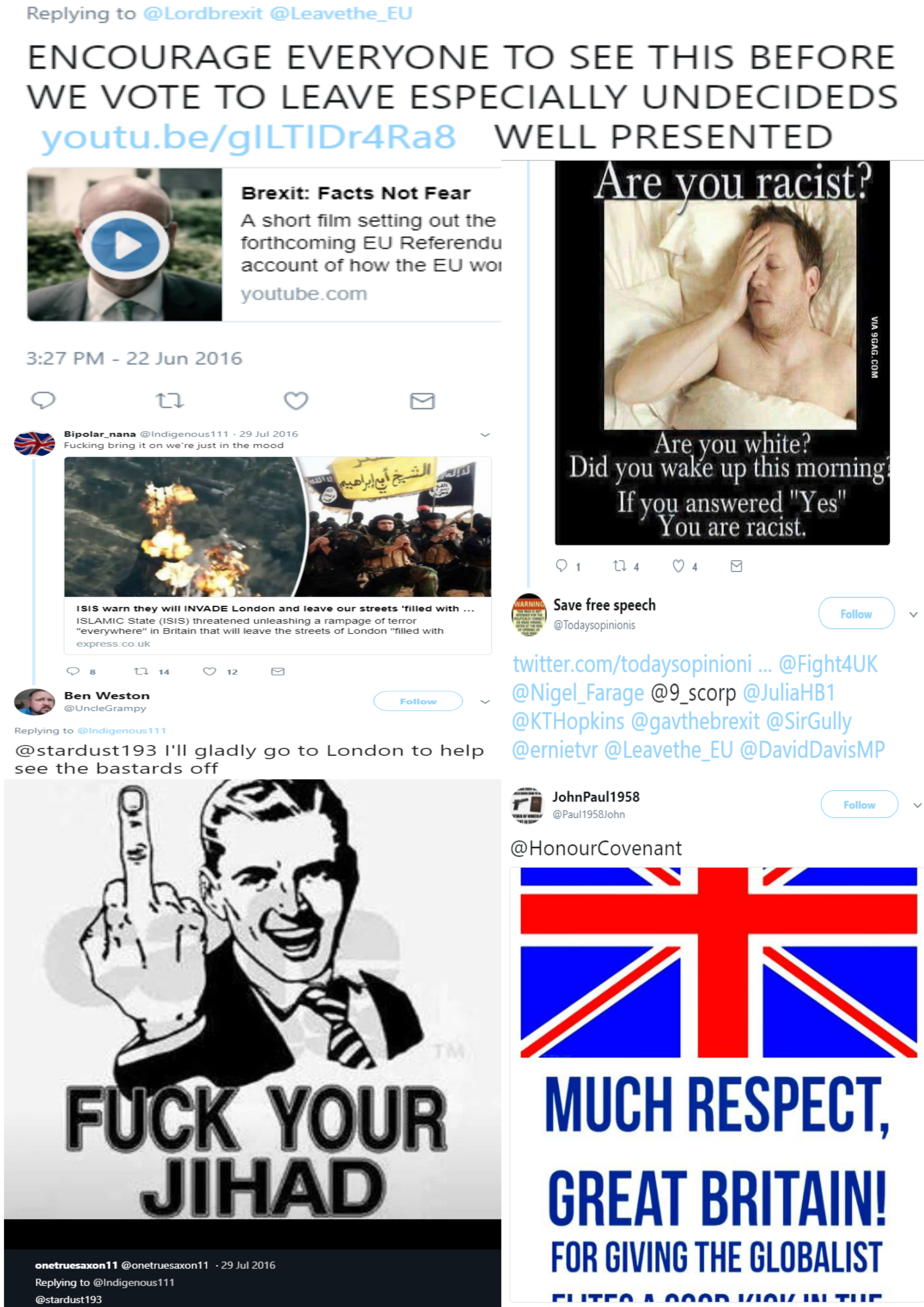 They are designed to provoke emotional reaction and they do, sucking in right-leaning individuals who then become part of the networks.

Often, they are seeded with “convincers” to make people believe they are just normal Brits, living otherwise uninteresting lives in little old England. But there is always a tell, whether it be the use of Americanised movie English, or the helpful geolocation data carved into the pumpkins they are borrowing from Pinterest and claiming as their own. 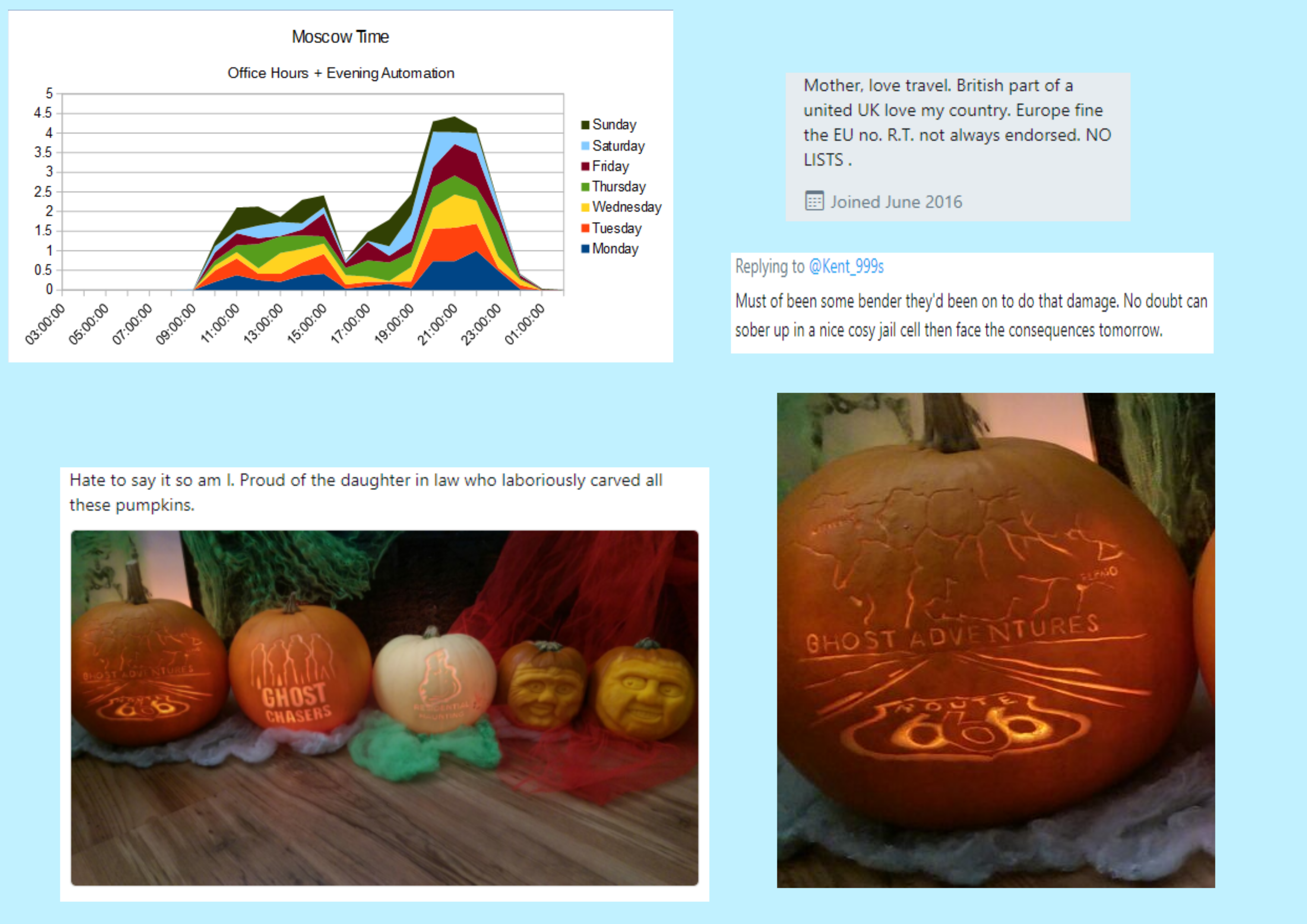 One of the key identifiers across this network of active trolls is their affection towards all things patriotic. A simple, visual dupe. And one which is pervasive. 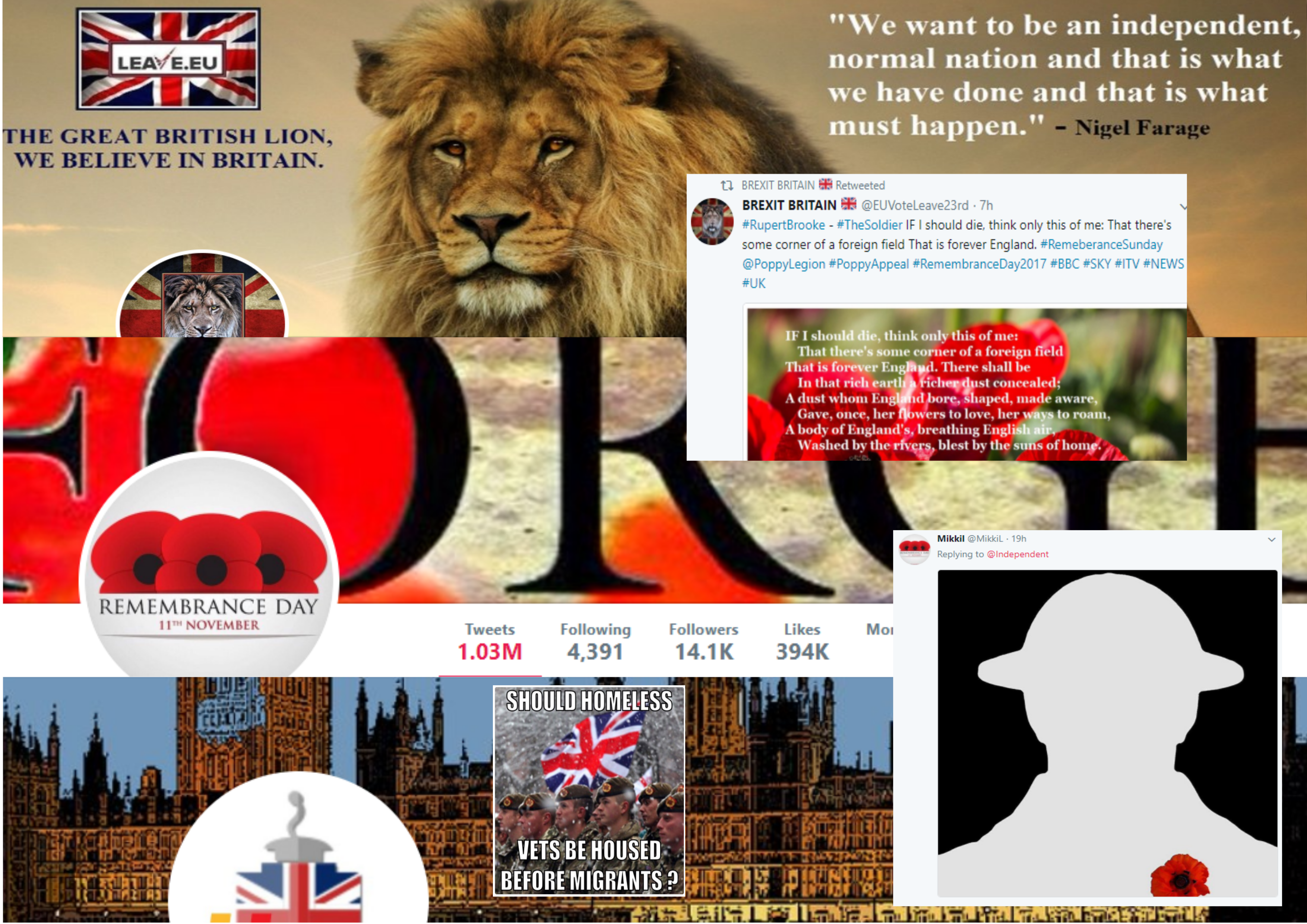 Poppies are no longer the symbol of blood which bathed the fields and led to peace. They are the symbol of false patriots leading us to war. Race war. Class war. World War. And among those real people interacting with Russia’s trolls lies a seething mass of rage and racism which is as terrifying as it is ignorant. A perfect target.

There is nothing patriotic to be found. In any of it.

instigate the populace with rage beyond the provocation, is to

suspend publick happiness, if not to destroy it. He is no lover

of his country, that unnecessarily disturbs its peace.”

The extensive number of Russian accounts are part of a long-laid social engineering plan, cooked up as far back as the Soviet era, and at the moment they are winning in the Alternative War. Creating a perfect illusion of public discourse which has, subsequently, become genuine discourse.

We also have reached a dangerous point. We are approaching the Crisis stage of the RCpG doctrine. And sufficient numbers of people have been actively taken in by the disinformation network that this will, in all probability, translate to the real world very soon – something which has already started, with escalating far-right activity on the streets in the UK and US.

Sadly, due to the complexities of the carefully designed network of false personas, many of the accounts will pass through so-called bot detectors with a human result. Likewise, the old principles of 8 digits meaning an account is a bot no longer apply.

The only way to identify a troll is by looking at their timeline, checking them and their follow lists out, and making a judgment call based on the evidence available – which isn’t the same level of evidence accessible during full analysis.

While I dearly wish there was an easy way, all I can do is point you back to Samuel Johnson and remind you of what he said on the evening of April the 7th 1775: “Patriotism is the last refuge of a scoundrel.”

We’ve needed to talk about patriots for a while.