Politics within an established, liberal democracy lurch suddenly to a conservative extreme and changes in the nation’s direction occur at an alarming pace.

Within three years the political and social landscape is polarised and the checks and balances fail inside and outside of government. A leadership figure emerges who captures the more aggressive side of public sentiment and increasingly intimidating and violent acts suppress opposition, resulting in a shell democracy under which ever more draconian laws and controls and introduced to cement the power grab and crush any resistance.

A new system of wealth management and taxation is combined with restrictions on rights, liberties, and the freedom of the press, producing a regime under which compliance with the despotic state is the only option for everyday survival.

An assortment of financially motivated cartels co-operate with the leadership to maintain certain benefits in kind while creating a landscape which is detrimental to the general public.

Standards of living are forcibly reduced in order to maintain control of population levels and eliminate dissent opportunities, and the education system is altered to maintain easier psychological control of citizens by limiting critical thought. Patriotism becomes compulsory and eugenics are introduced to maintain a certain standard of genes within the national pool, deemed acceptable by the leadership.

Propaganda replaces the news diet of the population and the country is maintained in a constant state of preparedness for war, including the introduction of rationing and hyper-manufacturing, with periodic military incursions on foreign soil taking place using conscripted troops.

It almost goes without saying that Nazi Germany provides the most relevant historical example of the take over of a nation by a populist movement. However, human history is rich with accounts of despotic transformations, not least including the contemporary, so-called “managed democracy” of Putin’s Russian Federation or Erdogan’s incarnation of Turkey. We even fantasise about it – see 1984 as one example.

While right-wing movements are on the march across Europe, the AfD’s rise to parliament sending shivers down the spine of a mortified Germany, the two countries showing the gravest warning signs of this scenario becoming reality would have once been surprising to most: The United States of America and Great Britain.

President Trump has proven to be worse than expected, embracing neo-nazis, attacking anyone with brown skin, barraging the media with claims of falsehood, and provoking nuclear war via Social Media. His latest move towards the traditional image of a dictator is being freshly reported as news while this article is being written: he has asked the Pentagon to put on a military parade.

However, Brexit Britain is no less alarming.

Theresa May announced a new unit to combat Fake News, with the spokesperson telling The Times it was aimed at controlling critical articles on the government and the Conservative party, rather than focusing on broader disinformation. She has subsequently followed this up with a Manchester speech, in which she launched an inquiry aimed at bringing control of the news back to traditional media groups – giants such as the Daily Mail, who have instrumentally stirred hatred of immigrants for years while accusing judges of being enemies of the people and anyone opposing May’s totalitarian vision a traitor.

Given the close and disturbing relationship between the Conservatives and the UK’s media cartels, it is highly likely such an inquiry would in fact purely benefit circulation and profits of these companies, who have otherwise been in financial decline – of course, securing positive media coverage for May’s government in the process, under threat of being outlawed as what she calls a “credible outlet.”

May has long been one of the most draconian figures in UK politics, presiding over mass illegal surveillance by GCHQ, and even launching controversial “Go Home” vans. However, she is now surrounded by a hardcore of far-right politicians and embraces their support to prop up her notoriously shaky leadership position.

The last week has seen a further slide to the extreme right, with the introduction of a bill creating a new offence of “intimidating people in public life,” despite a consultation in which even the police said no new powers were necessary. The fresh offence would curb not only online criticism, but also support Trump’s recent requests to prohibit protests should the despotic leader of a rapidly declining America, troubled by stock market losses, comes to visit.

Alarmingly, a number of less than credible Conservative MPs have mysteriously found themselves embroiled in allegedly violent protest events (Rees-Mogg and Davies), while another has publicly shown a purported threatening letter sent to a Brexit supporting constituent (Goldsmith). The events themselves do not stand up to any scrutiny and appear staged or suspicious, notably all of them claiming violence or aggression by parties wishing to remain in the EU. Right-wing news and disinformation outlets have been having a field day.

Disturbingly, genuine threats of violence and intimidation from the leader of Britain First, in support of Rees-Mogg, have been ignored, along with almost two years of extensively recorded and reported hate crime committed by racists and bigots.

It has also transpired that right-wing groups have been training for civil war in secret groups.

In addition, a number of potential electoral offences on the Leave side remain under investigation and we haven’t really started on the Russia issue.

Finally, the extreme-right of the Conservative party are promoting active engagement in tours of Universities.

None of this absolves Labour, the worrying Messiah worship of Jeremy Corbyn, or the increasingly disturbing attack dog behaviour surrounding Momentum, yet for the purposes of this article, this is sufficient information. 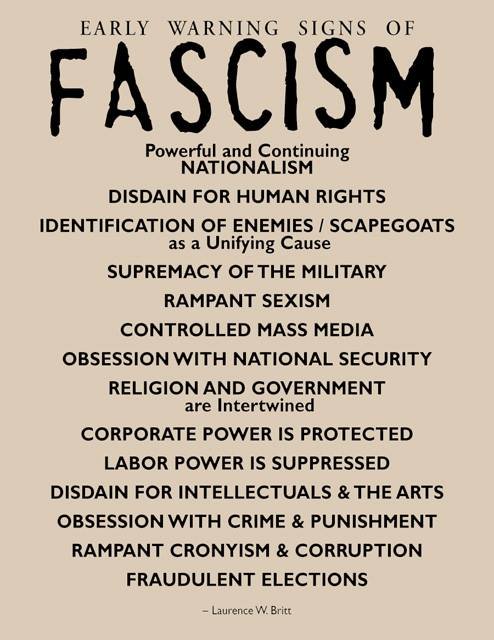 Image From ShiftingPhases.com – Using The F-Word In Class

It is the 1st of April 2019, Britain has officially left the EU with no trade deal and no transition arrangement.

The Irish border has been thrown into chaos and the military have been deployed. Lorries have turned the countryside leading to Dover into a carpark and all flights are grounded.

Exporters are already collapsing under the paperwork burdens of WTO rules and cannot organise logistics.

2.8 million people are being made unemployed and 8% of GDP has disappeared in a puff of smoke already. Jam production has fallen off a cliff.

Over 2,000 people arrested during an anti-Trump protest have been moved to a specially created encampment due to a lack of space in prisons and courts being unable to hear the cases – among them are fifty members of parliament. UN representatives have been ejected from the country following an incident relating to 120,000 unlawful deaths arising from cuts to the welfare system.

The number of homeless people has exploded following the collapse of the Universal Credit System and more camps are being opened by the military reserve forces to house a mixture of single people and young families – all of whom will work on farms in exchange for their new lodgings.

Food imports ground to a halt this morning and panic buying has left supermarkets empty with no signs of resupply, fuel supplies are also dwindling.

The NHS collapsed during the winter and all hospitals are operating as emergency rooms only with a skeleton staff.

The banking industry has finalised its departure from the UK and the City of London has taken tax revenues with it.

Public sentiment towards the government has collapsed in all groups but the extreme right-wing, and negative headlines are prevalent across all newspapers barring the Daily Mail and The Telegraph. Social Media is alive with criticism of the government and individual MPs who supported Brexit and protests on the streets are growing every day, producing increasingly frequent violent clashes instigated by extremist right-wing factions including National Action and Britain First.

By midnight the government has introduced emergency legislation, passed through a rattled parliament without opposition as thousands gather in Parliament Square, held back by armed military personnel deployed to support the overstretched police service.

The (Brexit) Emergency Act of 2019 gives the government broad powers to immediately close news outlets and control content, displace protests by increased force, shut down and control online and broadcast services, ration food and goods, deploy the military on domestic operations, electronically monitor all members of the public, suspend judicial processes and detain subjects in encampments, recess parliament, and to amend the act as required until control and order is regained – which is undefined in the legislation.

The act takes effect as soon as the vote is concluded and 140,000 domestically based troops are deployed to the streets alongside the police service. Protesters are forced back with rubber bullets, kettled, and detained in groups of 100 for transport to growing, military-controlled encampments in the countryside. Other emergency services are placed under armed forces command. GCHQ cuts online services and social media and commences an unprecedented monitoring of text messages and telephone calls, to identify dissenting voices.

All newspapers, barring The Sun, Daily Mail, and The Telegraph, are shut down and editorial control is handed to the Cabinet Office for all three outlets. Broadcast facilities are withdrawn from all outlets except the BBC, with content decision making routed through the same cabinet staff.

The government immediately introduces supplementary powers to the emergency act, including the seizure of all learning materials and the implementation of an emergency syllabus for all camp facilities and any state schools still functioning. It also formally recognises National Action and Britain First, bringing them under the direct control of ministers and providing them with police-like powers…

While the internet gives a number of check-lists – some of which are from survivors of despotic regimes – this scenario leaves you up the proverbial creek.

If you were protesting, you are headed for a camp under no rule of law and without a justice system to see you through. For everyone else, there are no safe means of finding like-minded groups and no way to escape the island. It’s either comply and receive rations or die.

Within one generation none of the past would matter in any case because it would be educated out and a reduced life-expectancy would reduce word of mouth to near zero.

In addition, there’s no cavalry as the neighbours have just been told to get stuffed, so it’s goodnight Vienna. Or nanight Torquay.

While this may seem like an extreme scenario, it is highly probable we will see deployments of the military and some other aspects of this come to fruition – with rationing pegged as particularly likely. Also, with moves to create new offences and media control already in the works, combined with a pre-existent propaganda disease and surveillance culture alive and well, it is likely restrictions to what we see and read will become apparent within the next two years.

Britain has undeniably shifted further right than anyone is comfortable with, and we are faced with an extended parliamentary term, a fixed term parliament act, and some coming, unprecedented changes to the fundamental rights and entitlements of every person living here.

In short, saying nothing is going to happen is like saying “Nah mate, we’ll get around that iceberg…yeah, it’s the Titanic, we’re all good.”

From a speculative contingency planning point of view, up to 35% of this scenario becoming reality is highly likely – with 50-75% moderately probable – and there’s nothing you can to do to plan for it, with the exception of leaving the country.

Next In Series: The Critical Infrastructure Attack.