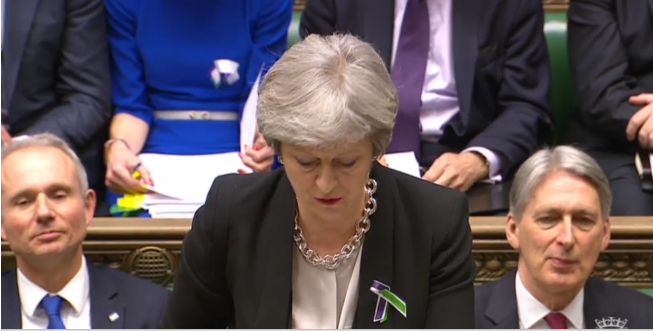 During Prime Minister’s Questions on 7 February 2018 the Guardian reported an exchange between Theresa May and Jeremy Corbyn over rising crime rates in the UK, in which Corbyn said “people do not feel safe and are not safe.

We have seen the highest rise in recorded crime for half a century.”

The Guardian reports that the Prime Minister responded by saying: “when she was home secretary, she asked HMIC to change the way police crime is recorded, so it is done properly.”

The exact wording, taken from Hansard, was: “when I was Home Secretary, I asked HMIC to look at the recording of crime to ensure that police forces were doing it properly. Indeed, some changes were made as a result, so we now see better recording of crime.”

This statement by the Prime Minister is false.

I’ve previously explained this when calling out US President Donald Trump on fake news around UK Crime, in summary:

“The truth of what’s going on with British crime rates is simply that, in 2013, I sparked a parliamentary inquiry into crime statistics, exposing how police forces up and down the country had been artificially reducing crime for at least 30 years. How they’d been failing to record or even deleting serious offences to keep them off the books.

At the time I was working for Scotland Yard and the Metropolitan Police was the worst offender.

As an immediate result of the inquiry, Police Recorded Crime was stripped of its status as an official National Statistic, the ‘targets culture’ was abolished at a national level, and the British Crime Survey was castigated for its own failures in estimating crime accurately.

During the hearing in which I gave extensive evidence, the Public Administration Select Committee even apologised to policing for their part in pressurising the police to show crime going down.

The person who had presided over the failed culture, the Home Secretary, is now the Prime Minister, Theresa May.”

The Committee found that the Home Office, led by May, had been “far too passive” on the issue of crime recording, adding: “the Home Office, ONS and UK Statistic Authority have repeatedly

missed opportunities to ensure the integrity and quality of PRC data.”

The Committee also called for an investigation into the treatment of the whistle-blower who sparked the inquiry (me), saying: “the Home Office must clarify the route open to police whistleblowers who have exhausted internal channels within their police forces. We asked the Home Office for this clarification before we finalised our report, but they replied too late.”

1. The Home Office should do more to discourage use of targets.

2. The Home Office must take responsibility and accept accountability for the quality of Police Recorded Crime Statistics.

3. The Home Office should clarify the route open to police whistleblowers

Only as a result of this inquiry was the system of crime recording changed and May knows this full well.

The conclusion of her letter to the Committee chair and I, dated the 11 December 2014 reads as follows:

The full details of the Committee Investigation can be found at the Parliament website, here.