Analysis by independent digital experts 89up.org is the latest to confirm the scale of Russia influence operations during Britain’s Brexit referendum, identifying a potential value of £4.1 million in pro-leave campaign spending by the Kremlin.

Well over 130 million impressions were generated across online news and social media platforms, spiking on the day of the vote, 23 June 2016, led by Russian state media outlets RT and Sputnik, supported by an army of Twitter bots.

“Russia was actively engaged in amplifying Leave messaging and targeting

of June 2016. The volume of social media traffic is significantly higher

According to a new report by digital communications specialists 89up, seen by Byline Media, Russian media interference in the UK’s Brexit referendum was worth up to £4 million, and Kremlin-run outlets had more reach to the British public than the main campaigns Vote Leave and Leave.EU.

RT and Sputnik, both known arms of the Russian state – who openly admit to operating as part of Putin’s war apparatus – published 261 anti-EU articles during the first six months of 2016, reaching a staggering 134 million impressions.

The fake news and propaganda pieces analysed were most heavily pushed on referendum day, June 23, and the efforts of the Kremlin’s media operations were supported by an army of bots.

Kremlin social media accounts produced equivalent traffic to almost a third of that generated by the domestic campaigns to exit the European Union.

False news stories included a number of untruths about the EU, immigration, MI5 and the CIA. Analysts claim there are many more articles, and additional outlets which need to be reviewed by Parliament, having submitted evidence to the United Kingdom’s Fake News Inquiry.

“Russia was actively engaged in amplifying Leave messaging and targeting

of June 2016. The volume of social media traffic is significantly higher

On the 15th of November 2017, Byline published the first comprehensive analysis of Russian social media influence on the Brexit referendum, identifying that: “Russia was actively engaged in amplifying Leave messaging and targeting both undecided and Remain voters during the critical hours of the 23rd of June 2016. The volume of social media traffic is significantly higher than claimed so far and would have reached the entire voting population of England, Wales, Scotland, and Northern Ireland.”

The overwhelming media influence of RT and Sputnik, compared to other media outlets, with pushes of fake news and disinformation being supported by an army of bots and other actors, was a central focus of the Byline work.

Brexit: The Russian Job was the culmination of months of work tracking the links between the far-right across Europe and the US, and analysing social media to identify how Russia manipulated the Brexit vote and supported the Leave campaigns – notably Leave.EU, the brain child of Arron Banks, Nigel Farage, and Andy Wigmore.

The full body of research, which is still growing, can be found here.

The new analysis by 89up mentions 45 Twitter accounts based in Germany as being part of the Russian botnet belonging to the St Petersburg based Internet Research Agency.

These accounts were first analysed and reported on by Byline in the November 15th article, though Buzzfeed later cited them on November 24 – which is referred to by 89up in their research.

At the time of the November article, Byline described a visual analysis

of the German accounts as: “Bacteria or a virus. An infection aimed

Byline also exclusively collated a number of Russian Brexit memes, originating from the Kremlin botnet and scraped from social media by a researcher, and made the public archive available on November 15 via Liberty Stratcom.

The fresh analysis around RT and Sputnik impressions conducted by 89up also identifies a number of social media accounts previously cited by Byline, including Prison Planet, Voice of Europe, and MikkiL.

My personal evidence was submitted to the Digital, Media, Culture and

Sport Select Committee in the House of Commons on November 21, after

initially reaching out the chair, Damian Collins MP, on November 11. This directly followed the publication of an article for Byline on November 10.

The UK’s Fake News Inquiry has since joined forces with the US Senate’s Russia Probe. 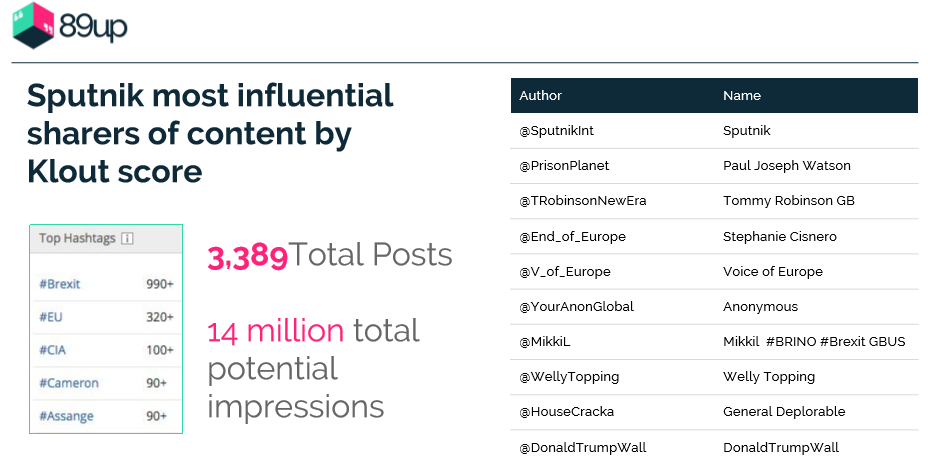 While Russia and Leave.EU have downplayed Facebook ad buys, focusing on a figure of 72 pence spent by RT on marketing on the platform, 89up estimates the value of 8.74 million Facebook impressions discovered in the analysis could be around £70,000. Equivalent to the initial $100,000 identified in the US Senate Inquiry into Putin’s support of Trump. 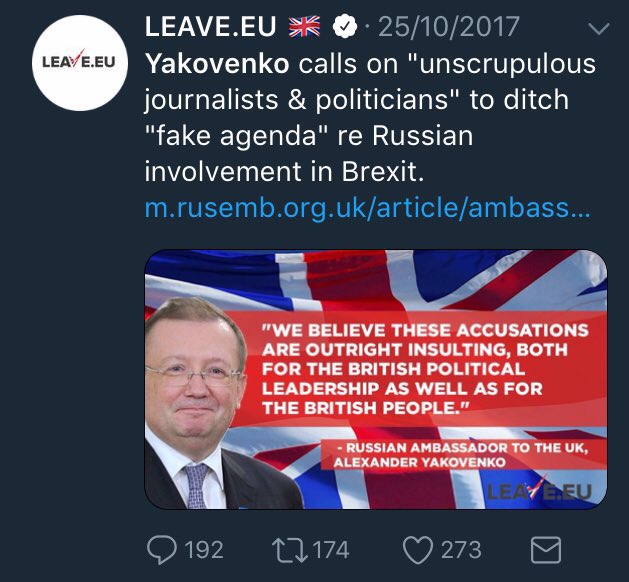 Twitter also fell under the scope of the research, where 89up discovered 134 million impressions had been generated by Russia, targeted at pushing Leave messages. They estimate this could have been worth between £32-70,000, on top of the $1,000 already known to have been spent by the Internet Research Agency on Brexit.

89up’s estimations of value are helpful to previous at work done at Byline, where in October we highlighted: “Paid advertising is the thin end of the wedge. Off the books we have an extensive problem. The easiest way to explain the function of the botnet is to describe it as money laundering, but for social engineering. This is where the importance of bots and trolls versus paid advertising comes in: they are doing the same thing, but only one has official records to turn over.” 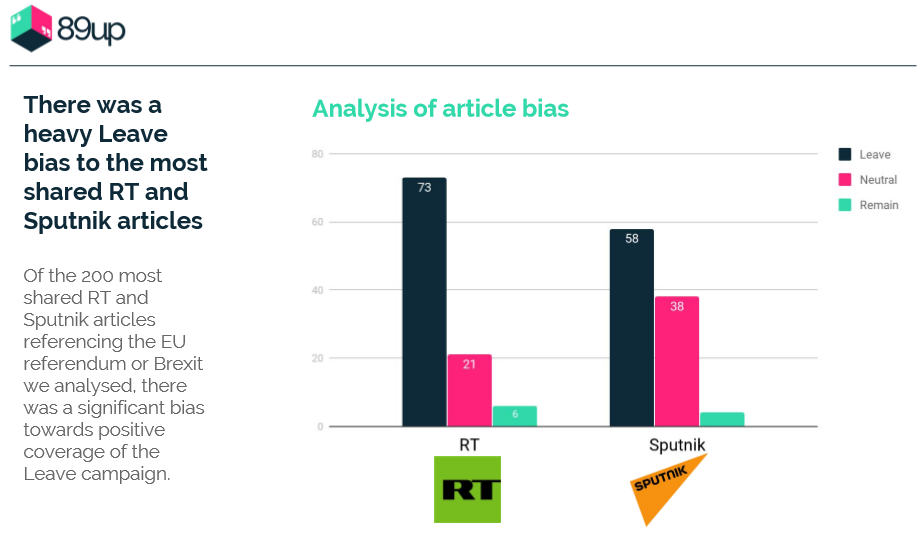 The key conclusions of the 89up report mirror many of those made at Byline over the last year:

1. Russian State Media had the same impact on the UK as both leading Leave campaigns.

2. The Russian impact on Twitter was larger than both Leave campaign’s combined efforts.

The researchers noted that no other foreign state came close in terms of their activity or reach during the Brexit referendum.