Defriending Putin: How Britain Must Defend Against Russia

Theresa May as part of the G20 Summit in Hangzhou, China, September 4,

Theresa May has declared it is “highly likely” Russia is the responsible culprit for a nerve agent attack against former Russian spy Sergei Skirpal. She demanded an explanation from Russian President Vladimir Putin within 24 hours.

May said the “military grade” nerve agent deployed in Salisbury was “Novichok”, a substance developed by the Soviet Union in the

While the European Union has expressed solidarity with the UK, despite the onging Brexit troubles, the White House has, unsurprisingly, declined to comment on the attribution of the attack.

As the Russian Ambassador has been summoned to the Foreign Office to give an account of whether the attack was state-sponsored, Russian assets have called Skirpal a traitor, Russian Media has claimed the UK attacked itself, and both the Conservative and Labour parties have come under increasing pressure over Russian party donations and paid appearances on Kremlin-run media station RT.

https://twitter.com/J_amesp/status/972747163615875072p>While UK politicians have now openly started to discuss Russia’s hybrid war against the West, condemning the hostile actions of Putin’s criminal state, with hundreds of  thousands of

troops and weapons systems amassed on Europe’s Eastern borders, and a chain of successful interventions increasing Russia’s global military and energy dominance, the reality is an underequipped NATO and troubled Europe would be overwhelmed within days.

aggression, in order to avoid a transition from hybrid offensive to a

A day before the official attribution by May, I briefly suggested a measured range of immediate options – not only in light of Skirpal but following a year of investigating Russia’s Alternative War. While longer term measures can be addressed by Parliament over the coming months, the proposals need to be implemented simultaneously – and within two weeks – in order to be fully effective.

Others have suggested boycotting the football World Cup, due to be held in Russia this summer. This is absolutely puerile.

The Government needs to understand this is a hybrid military defence and not sanctions measures or individual areas of policy. We must not do less, yet we must not launch into ill-advised cyber warfare for which we are not equipped or prepared.

British lawmakers must further understand how all of this allows power projection by Putin as he plays to a domestic election audience – and how any attack response at this time would allow the Kremlin to push a ‘whataboutery’ narrative of Western interference in Russian elections in perpetuity.

This is purely a case of getting our house in order and allowing time for careful reflection on future steps.

In a little more detail, the combined, immediate measures the Government must take are as follows:

The full weight of the provisions of this act need to be focused on Russian money launderers, financial visa tourists, tax evaders, and domestically domiciled Russian assets.

Home Secretary Amber Rudd has already indicated this is being considered by the Government. 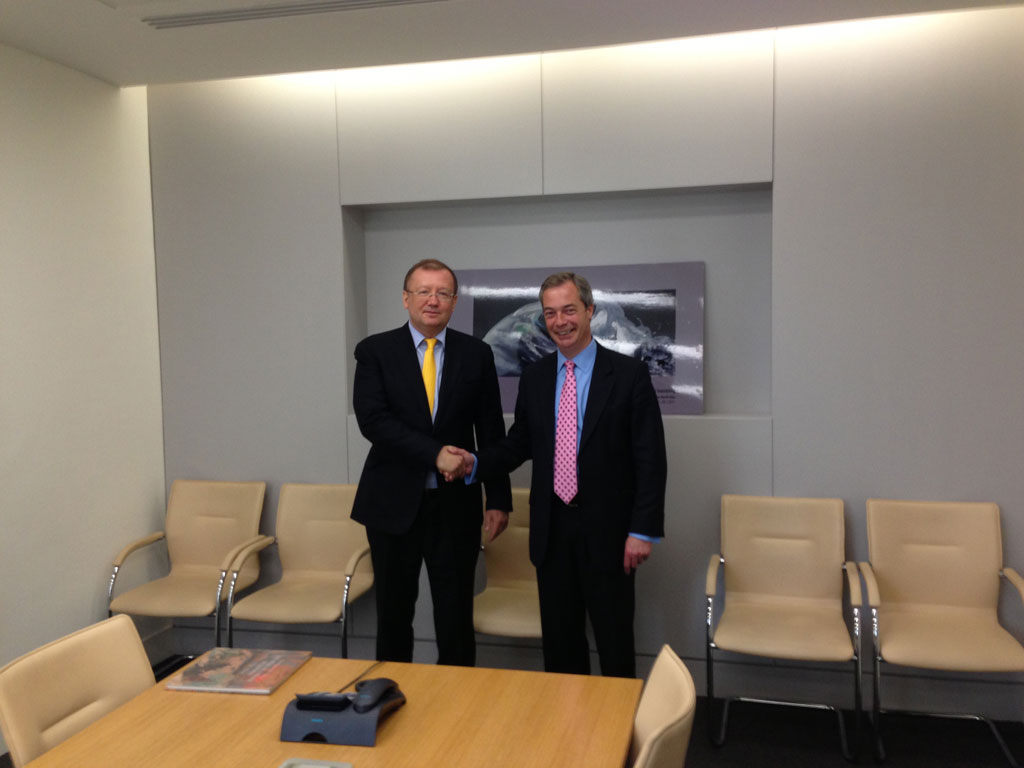 The current Russian Ambassador to the UK, Alexander Yakovenko, photographed above with

Nigel Farage, has actively involved his embassy in a campaign of disinformation, even meeting with key figures instrumental in Brexit – though they claim not to have understood they were being used.

In recent days, the Embassy under Yakavenko has pushed a line of denial around the Skirpal incident, including juvenile meme-trolling of the British public – some of whom have been sucked in with the assistance of locally-based, suspected Russian assets peddling outright conspiracy nonsense.

At this time there is no reason to allow the Ambassador to be extended a continued diplomatic welcome and the message would be undeniably strong.

By the end of 2017, even the utterly blindsided UK intelligence community had conceded Russia had risen to the position of top-level threat to the UK, as recounted in the annual report of the powerful Intelligence Committee.

The security services are fully aware of all key Russian assets – including detached and deniable assets – operating in the UK and must take immediate steps to eject the key Russians and deal with all domestic “recruits.”

Sputnik and RT are not simply national broadcasters. They are Kremlin-run functions of Russia’s foreign apparatus and are engaged in information warfare.

Kremlin money has found its way directly into UK parliament through RT, public officials and influential commentators regularly parrot and amplify Kremlin narratives on the channel and off it, and these channels eclipsed official campaign groups during Brexit – without having to declare anything.

These propaganda channels, which in their own words form part of Russia’s military machinery, have no place being broadcast to the British public and do not form any part of a “freedom of speech” debate.

From domestic naval deployments surrounding critical undersea cables, to ensuring the British military is fully equipped to deal with any future “hot” offensives, the Government has an immediate and pressing responsibility to ensure the army, navy and airforce are ready for deployment.

The UK must ensure military support is bolstered not only at NATO strategic positions on the EU borders, but also carry out a review of foreign postings around critical infrastructure sites, in order to prevent further degradation of gas and oil supplies – something which only recently resulted in the embarassing delivery of Russian gas by boat when the Ukraine pipeline was pinched after an adverse court ruling against Russia in the EU.

Britain does not have sufficient fuel reserves to cope with such events.

According to some experts, the UK is £875 million short on meeting it’s 2% GDP NATO commitment to defence spending.

Though the UK denies this, the Financial Times reported in February 2018 that: “According to figures from the Office for Budget Responsibility, nominal UK GDP in 2017 was £2.029tn. Using this figure suggests that £39.7bn of defence spending equates to 1.96 per cent of GDP.”

New Defence Secretary Gavin Williamson has been proactive in his approach to Russia so far, rightly warning that a catastrophic critical infrastructure attack is imminent, and attributing NotPetya – named the most devasting world cyber attack to date – to Russia earlier this year. He has requested that the treasury raise the GDP threshold to 2.5%.

Due to several years of false-economy austerity affecting the British military, the changing nature of threats, and the risk to our NATO allies in Europe, the Government must immediately commit to a defence spend of between 3.5 and 4% and release the first tranche of funds within weeks.

The Government is faced with a rational choice between

the pursuit of purely ideological, long-term-aspirational Brexit negotiations, or the suspension of Article 50 while under national threat – in favour of closer co-operation with our EU partners and NATO neighbours for the sake of security over politics.

The EU defence initiative (not an EU Army as often reported), which partners closely with NATO – and could see the latter change shape in wake of the fall of the US – is specifically focused on defending member states from the hybrid threat posed by Russia and its partners.

It is illogical for Britain sacrifice security and intelligence sharing protocols at this time and such action could not easily be defended by any Government.

Brexit could, of course, be returned to at a later date when risk has been mitigated.

Return All Party And Personal Donations From Russian Sources:

This really doesn’t require explanation: it’s about clearing the slate for every party, politician, and campaign and should meet no resistance whatsoever.

For a substantial amount of time, GCHQ has been engaged in often illegal mass surveillance and data sharing, to the point where the former head of the service declared it had been completely blind-sided by Russia’s hybrid offensive.

While there is capacity for cyber-offensives – which would be misguided in any case as our cyber capacity is currently marred by issues around Huawei – GCHQ has failed to adequately defend the UK thus far (from DDoS on voter registrations to Wannacry).

Subsequently, the Government must immediately shift the focus of GCHQ to the provision of impenetrable defence, a national firewall, while we regroup, reorganise, and develop long term strategies to meet the rapidly changing and hostile hybrid warfare environment.

Russia is sigificantly more advanced and could easily wipe the floor with the UK within less than 24 hours with a co-ordinated offensive.

The tech giants themselves believe they are above the law and this is unacceptable.

The Government should – and has every right to – declare the platforms as publishers and/or broadcasters and give them one week to get their houses in order before legislation is introduced to regulate online content – following the German model which has positively impacted Twitter and the French model which saw 30,000 Facebook accounts deleted before the Macron election.

Parliament would doubtless agree with such a move – a matter of simple regulation by declaration of status – and a publishing/broadcast status puts a number of responsibilities onto the platforms which they are not currently burdened with.

Subsequent legislation should, specifically, not outlaw anonymous profiles per se but target unnacountable profiles – i.e. ones which cannot be traced to a fixed IP address, or otherwise be verified as belonging to a real person with at least both an email address and phone number, followed by Captcha.

Social Media companies could easily restrict their UK networks to exclude accounts failing to meet these criteria and, in fact, this could be actioned within weeks.

If you say something online, you must be able to be prosecuted for it if it is illegal and, again, this is not a free speech issue – because you can still choose to say it knowing the consequences, the same as is true of any criminal act.

The social networks could also easily ban all accounts using VPNs and the Government should request this is done with immediate effect.

Regulation is not a controversial view and is shared by the creator of the world wide web.

In 2015, during a speech at Sochi, Vladimir Putin said: “Even 50 years ago, the streets of Leningrad taught me one thing: if a fight is inevitable, go and fight first.”

My dad, who grew up in Southampton while it was still rubble after World War Two, always told me: “You should always try to shut down a fight before it starts, and only ever get stuck in if defending yourself fails.”

The British Government would do well to listen to the advice of two men from Hampshire over one kleptocrat from Saint Petersburg.