On the front lines of World Cyber War 1 part 2: Hacked off; one Ukrainian White Hacker’s battle with Russian Terrorism 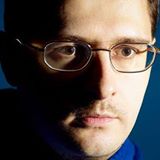 Eugene Dokukin, one of Ukraine’s leading cyber warriors, ironically bears a passing resemblance to Edward Snowden. It’s now apparent that the CIA whistle blower has become a tool of Russian special services and is therefore battling on the opposite side to Eugene. Yet both of them are participants in a global conflict which has initiated a new kind of conflict. When Russia created a phoney separatist movement in Ukraine’s Donbas in 2014 it also opened up a “cyber front”. Putin had decided to wage war on Ukraine and the west while denying that he was waging war on Ukraine and the west. He was initiating a new kind of war which would be formally adopted by Russian in its military doctrine signed into law by Putin on 25 December 2014. The doctrine calls for the use of non-military measures alongside conventional military power including mobilising the protest power of the population. Ukraine was a testing ground for this new warfare. After disgraced Ukrainian president Yanukovych fled Ukraine in February 2014 Russian special services seized public buildings in Donbas while masquerading as local separatists. Local rent a mobs and crowds bamboozled by Russian propaganda demonstrated in support of this fake insurrection Putin’s intelligence services created two phoney republics the “DNR” and the “LNR” to disguise his invasion of the area. These fake countries provided a flag of convenience for a motley army of local collaborators and Russian mercenaries and Nazis. They provided a fairy tale for gullible foreigners about heroic miners resisting a Fascist coup in Kyiv, but they would not survive without massive Russian military support.

The two fake republics needed money from deniable sources which could not be traced back to Putin. Equally they needed to create an alternative reality in cyber space to provide their followers abroad and in Ukraine with a cover story. The web which allows money to be pumped through shadowy payment systems was the ideal vehicle for financing Putin’s terrorists. From June 2014 to February 2018 alone Eugene and his fellow volunteers from Ukrainian Cyber Forces blocked a total of 522 accounts. He reels off the names of the payment systems involved: “WebMoney, Yandex.Money, QIWI, PayPal, GlobalMoney, PerfectMoney, OkPay, LiqPay, EasyPay, Skrill and bank Privatbank”. Eugene notes that a large number of western firms are involved in financing Russia’s DNR and LNR terrorists. Equally a large number of citizens in western countries have been bamboozled by Russia and are sending the two fake republics money via PayPal. Eugene and his colleagues have closed down /blocked 220 sites used by the Russian curated republics to spread their fake narratives since June 2014. They have also they blocked accounts used to promote these terrorist entities in social networks.

Putin had intended the DNR and LNR to be the start of a wave of fake revolutions across Ukraine in 2014 which would be known as the Russian Spring. The project failed because a key element in Russia’s military doctrine “the protest power of the population” could not be mobilised. Putin underestimated the strength of Ukrainian national feeling. However his ambition to conquer all of Ukraine remains unchanged. Like the Soviets before him he will liquidate any potential opposition if he succeeds in conquering these areas. Halyna Pahutiak a writer who has visited area liberated from Russia near the front line says that “Ukrainian patriots there tell me that ‘we are all in blacklists. If the occupiers return they will murder us”. Dokukin and his colleagues have closed down hundreds of websites where Russia’s proxies maintain blacklists of Ukrainian activists. However he notes that “a lot of sites with personal information on Ukrainian patriots remain operational. These sites are hosted in Russia or in other countries (like France) and their hosters refuse to remove sites with personal data at my request and also they are defended from DDoS attacks, so we’ll need a powerful bot network to take them down. But it’s very expensive…”. Ukraine has not yet financed at all its cyber war with Russia.

An important component in discrediting the fake narratives circulated by Russia is exposing how Putin and his inner circle manipulate journalists and their real objectives.  In October 2016 Eugene’s colleagues,  Ukraine’s CyberHunta group,  hacked the e mail account of Surkov, a close Putin adviser. Surkov’s role in Russia’s hybrid war is not accidental – the country’s official military doctrine reflects his concept of nonlinear war as outlined in a pseudonymously published science fiction story. His e-mails revealed that Russia was coordinating the actions of its DNR and LNR sock puppets. They also contained plans to destabilise Ukraine during early parliamentary elections by supporting nationalist and separatist politicians. The three caches of Surkov material have been uploaded to the net by Ukrainian activists InformNapalm. Some of the material is being analysed by British MP Bob Seely and Ukrainian writer, editor and activist Alya Shandra of Euromaidan Press in a report for the Royal United Services Institute which will be published in May 2018. Their work will show illustrate the methods used by Russia to destabilise and destroy other societies.

These techniques are being applied to Europe now. Eugene’s work and that of his colleagues shows us what we need to do to tackle Russia’s multi-faceted assault on the west. He has helped develop NATOs approach to tackling Russia’s cyber offensive. Unfortunately while many Ukrainian citizens understand Russia and its active measures many in the west are oblivious to the assault being launched on their societies. Putin’s modus operandi should now be obvious. Yet he seems able to manipulate elections and finance pop up Fascists in the EU without being held to account.

The west, by contrast with Ukraine, lacks any major civic society initiative to tackle his active measures. Indeed Putin has subverted civic society by hiring assets and activists across the entirety of the political spectrum. Stop the War, UKIP… conservative and Labour politicians, Syriza, Le Pen… a whole array of civic society initiatives in the west are actually spreading his propaganda. There is no western equivalent of Ukrainian organisations such as Euromaidan Press, StopFake, UCF and InformNapalm. Indeed many supposed grassroots radical initiatives are heavily infiltrated by people with links to Russian proxies. Most Brits and most westerners are oblivious to the fact their democracy is compromised. Even Brexit the country’s major geopolitical choice was made with Putin’s influence. Britain is leaving the EU on a tide of xenophobia and delusion at least in part stimulated by Putin’s active measures and his western collaborators.

Unless we learn from the work of Eugene and his colleagues it is likely that the UK will be transformed into a managed democracy. Elections will be won by data mining, bots and oligarchic political projects. Russian and Saudi oligarchs will cruise the streets of London in Bentleys while most British citizens grow ever poorer and their roads and hospitals crumble. But whatever consultancy inherits the mantle of Cambridge Analytica will make sure they have someone to blame for their increasingly miserable lives. The Rothschilds, Soros, the immigrants… one or another of them will have sabotaged Great Britain. You can be sure of that.