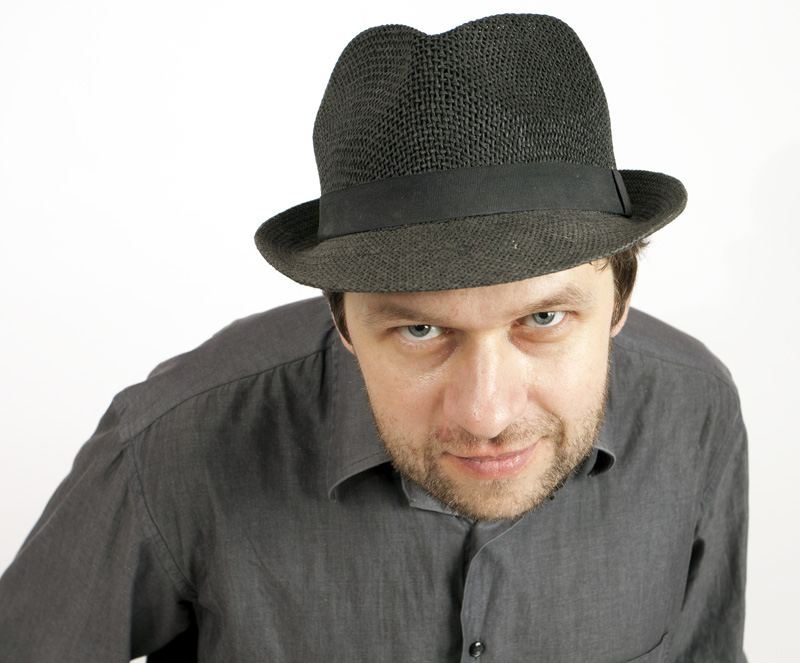 Oleh Shynkarenko is a human chameleon, a musician, journalist, author and philosopher all rolled into one. He is struck by the craziness of the war as much as anything. I ask him about how the conflict is perceived close to the front line “I regularly communicate with people in the Ukrainian controlled area near the front. The people there can’t be considered a homogenous mass. Some are in a fantastic reality which helps them reconcile with the situation. I remember a man in Mariupol stood in his apartment that had been ruined by Russian weapons. He exclaimed enthusiastically ‘Putin is so strong! He is very cool! He will show these Americans and everything.’ It’s a kind of psychological compensation to save their minds from disintegration.”

He is blunt on the reasons behind Russia’s war on Ukraine. “It’s revenge. Russia cannot be as powerful and strong as the USSR. However it has an impractical yearning to be that empire again. The only way to compensate for that awful resentment is vengeance.”

When the war began Oleh and many Ukrainians expected a full scale invasion. “I moved to West Ukraine for a while and wrote this short story there. It depicts, very accurately my anxiety in this period:”

You can touch them with your hands

Me and my wife were walking in close proximity to a local nuclear station with our 15-month son. Okay, it wasn’t so close really, but one could get there by a special bus in only 15 minutes. It was close enough to take some pictures with my smartphone and publish them on Facebook immediately. We couldn’t hope to take the bus there, because it was only for use by the station’s staff. So when the bus stopped right in front of us we were a bit embarrassed. Just a bit. We didn’t dare hope that they want to take us right up to the reactor? The bus driver looked at us inquiringly.
“What does he want?”  I asked my wife.
”I don’t think he would like to ask the way or something…” my wife mumbled.
Another guy leaned out of the bus window and waved his hand, obviously inviting us to come in. Why not?
“But how are you going to pull the pram with our son onto the bus?!” my wife asked.
”Don’t worry!”
It wasn’t really as difficult as she thought. The guy was nice and the driver was too. They bandied a couple of nuclear jokes around and laughed. However we couldn’t laugh, of course, as their special terminology was beyond our understanding. We would have liked to work out why they picked us up at all.
“The equipment we have there is very safe,” the guy said, “You can take it in your hands, even the fuel elements.”
“But they are radioactive! ” I said.
“No, what a load of rubbish! You’ve read too many trashy newspapers! They make up a lot of nonsense about our work. Look here! Our bus has a nuclear engine and here you can see its fuel elements, I take them in my hands and it is absolutely safe, you can take them too. Catch!”
And he tossed something to me. I didn’t catch it of course and it fell into our son’s pram. So I had to take it out. It was a bit warm like a battery or something. I don’t know.
“Don’t be shy!”  the guy said. “In a couple of minutes we will arrive and you can touch everything with your hands, everything you want! And you can tell people in the town that it is absolutely safe.”

I put the fuel element on the bus floor and it rolled forwards with a threatening sound. I’d heard it before. I don’t remember exactly where.

Oleh notes that Russia itself has lost support in Ukraine when it could have used soft power “with grants, NGOs, donations, any positive politics. But instead Russia decided to act in such a disgusting way that it alienated even its most passionate supporters. The only way that reconciliation can be achieved is with the cessation of Russian military support. Nobody can have a dialogue when the machine-guns are talking.”

He admires Ukrainian poet Oleh Kotsarev “because he is very close to me aesthetically.” Kotsarev’s work is, like Oleh’s, experimental and continuously surprises the reader. Oleh views writing as being akin to mathematics. “I acquaint myself with certain facts and see a pattern. Then I convert them into a slightly surreal composition which very often gives birth to other facts and ideas. It resembles an equation: you have x,y,z, you conduct some operations with them, substitute values. As a result you have some unexpected conclusions. However, actually, they were expected, because it is a kind of mathematics: the result is limited by your variables.”  Oleh argues that  writing should “portray reality in some artificial way to reach the truth indirectly. The truth is hard to find, even the Dictaphone or video camera can mislead you: everything you see before your eyes is not the truth. Writers should invent very peculiar ways to acquire the truth”

These words could be a motto for his own first novel, “Kaharlyk”, which began as dispatches from an alternative reality on Facebook.. Oleh created fragments of concrete music, mixing sounds such as Serbian liturgical melodies, washing machines and cows mooing, to develop a soundscape for his world. The book is written entirely in blocks of 100 words. Andrei Kurkov describes it as a “hologrammatic” novel, a series of “beautifully crafted puzzles”. The novel is set in Ukraine after a war with Russia. A man has lost his memory because the Russian military has used his brain to control military satellites. He regains consciousness in a mysterious hospital-like building and begins a pilgrimage to find his past. Then  he journeys to Kaharlyk, a town where time has stood still following the testing of an experimental weapon. The book is the first imaginative exploration of how Russia’s reinvention of war and social media are warping our perception. There is no better text for understanding our current reality. Here are the opening pages. The protagonist is regaining consciousness and is unsure what is real and what is a virtual construct generated by algorithms from his own psyche.  Read them and reflect on how our societies are being unmade by our need for validation, hybrid war technology, and data mining: the commodification and weaponisation of the human soul:

Everything I could imagine resembled Kaharlyk. But what was Kaharlyk, what did it look like, and where was it? It seemed spherical, apple sized; its very uneven surface was covered in deformed growths. Some saw its unique beauty, but I did not know these people. Perhaps they gave me Kaharlyk to learn something important, or to simply smooth out its surface. However, I did not learn, and forgot everything they said. Only two words penetrate the dirty windowpane: Recollections and Diving. This is clearly a summons, but to what? Where is the verb? Kaharlyk melts; a key I cannot reach.

Suddenly Olena’s face appears, a wet maple leaf the wind plasters against the windowpane. She looks intensely at me for a moment, then her face darkens. I see her standing on the snow-covered road. Her green, knitted cap gathers the colourless vista around. Everything accelerates unexpectedly. Olena is wafted away, a photograph swirls off a table. The photograph of my wife she had taken some years ago and never shown me. Or perhaps I had taken it. When I find her I will ask. This place seems to be a hospital. I’m alone in a room with white walls.

I need to work out where I am, I should probably call for someone. This place resembles a village, a very small town. Fifteen minutes ago I saw a cow or an obese horse through the window. It’s unlikely big creatures roam city streets. A feral pack of urban cats could devour a herd of cows in a year. Any movement evokes a few recollections and some understanding of my situation. But then part of the knowledge acquired earlier evaporates. I rise and go to the window. The inscription Diving into Recollections is a large advertisement for a digital camera.

The sun reaches noon. The clock on the wall barely moves lethargic hands to eleven. Four minutes or four days have passed since the beginning; it’s hard to say. I go to the door, push; it opens onto a long, spectrally illuminated corridor with a dead end. I follow it, peering right and left for an exit. The doors are closed; then an open door. Someone is sitting at a table in the room. His thick-lensed glasses make his eyes like those of a fish. Hearing my footsteps, he had clearly been looking at the door for a while.

He looks with interest, but without empathy, like people look at cockroaches. ‘Have you seen the girl in the green cap?’ I ask, ‘I think she was on the street just now.’ ‘I have only seen a girl in a red cap, but not today.’ He stands and comes towards me. ‘If you saw something on the street, amend the time. It was long ago. Think of it as them showing you archive video footage.’ I understand nothing. ‘How can I find her?’ ‘Best leave here and look in Kaharlyk. She is probably there.’

Extract from “Kaharlyk” by Oleh Shynkarenko. Translated from the Ukrainian by Steve Komarnyckyj. The book, which was published by Kalyna Language Press in 2016,  is available from amazon.co.uk here and amazon.com here