The Dogs of War Part 1: Kateryna Havrish on saving the animals of Donbas 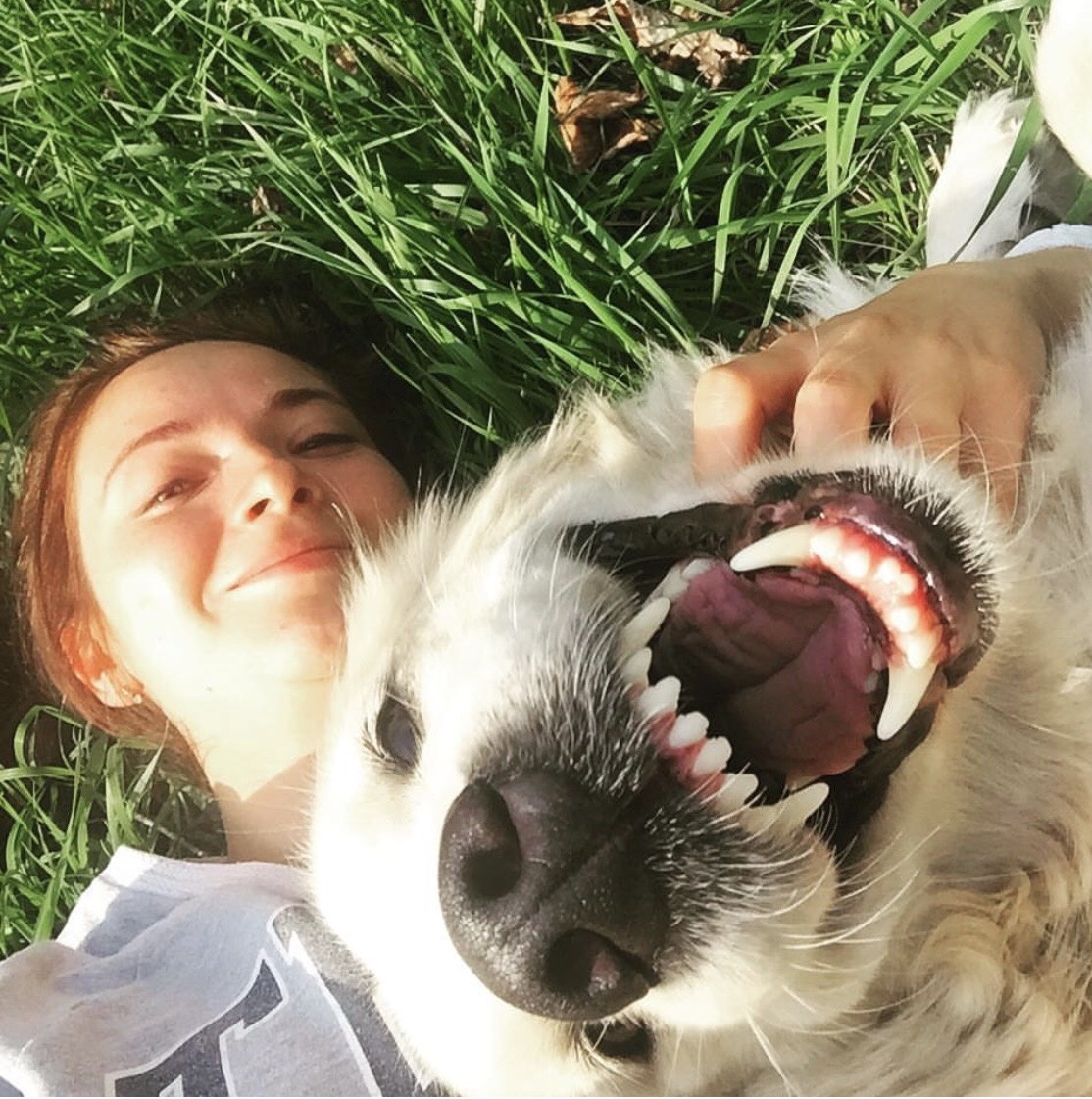 Kateryna Havrish was living in Stakhanov, Luhansk Province when the war began. She loved animals and had taken care of them from childhood onwards. She looked after kittens, puppies, hedgehogs and even a swift. She fed the bird by sitting near a mulberry tree with a fly swatter and gathering up the dead insects. When she grew up she established an animal shelter into which she poured all her energy. She persuaded a German fund to undertake the free vaccinations and sterilisation of stray cats and dogs in the city. She stopped the brutal massacring of stray dogs by the authorities.

But then improvised block posts began to spring up on the roads out of the town in 2014. “You’d just go to the next town and armed men would stop and search your car. It was really terrifying because unemployed alcoholics had automatic weapons and all the power that gave them. The pro-Russian mood among the locals surged. Anyone who supported Ukraine kept quiet, left, or disappeared. People fled the city in droves hoping that it would get back to normal and they could return. There was a point when you’d take your dog for a walk in the evening and it felt like the city had died. There was just a heavy silence and pervasive fear. There were rumours that if you turned on the light in your apartment at night it would be shelled. By 9 pm it was a ghost town. Then they introduced a curfew.

It was hell for me when people threw out their pets and preferred to save their TVs and clothes. There were people queuing at the vets to have their animals euthanized. There were helpless pedigree animals living on the streets. Almost all of them died during that first winter. We saved all we could but it was just a drop in the ocean. There were a huge number of cases of cats being shut in apartments without food and water. People became very brutal. You could be beaten for saying you were Ukrainian or supported Ukraine.

I couldn’t live like that and decided to leave. However I had to sort out the animals at the shelter. We had a lot of help from volunteers we knew in Germany who were prepared to take on our fluffy refugees and find families for them. I moved to Kyiv and my volunteer friends who stayed in Stakhanov sent dogs and cats to me as soon as I could get the money together to transport them. I stopped talking with some friends of course because of political beliefs. A lot of people have changed their views now. Those who shouted the loudest about how Russia would take over the Donbas and everyone would live like a king have now shut up. Everyone would be happy if this nightmare ended. But a lot of powerful people benefit from the war. There are always folk who make money from other people’s deaths.

I’ll never forget my first trip to Kyiv to take some animals from the shelter and send them to the German volunteers. The rules said we could only have two dogs per compartment. We had a medium sized dog two small dogs and three cats. We had to pay a bribe to avoid being thrown off the train. 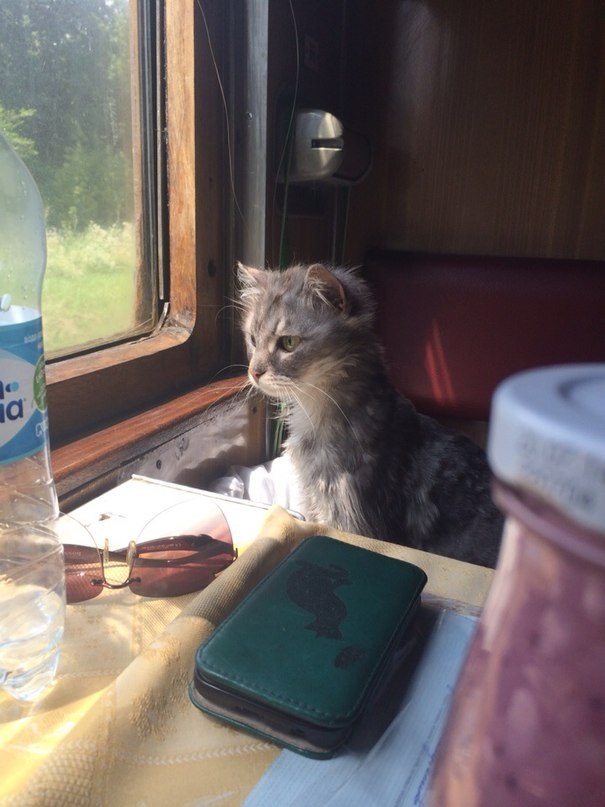 May I see your ticket please?

There were tragic cases connected with animal shelters which it still hurts me to remember. Anyone with an automatic weapon could just come to your home and take anything. There was an entrepreneur in one of the cities near Stakhanov. He had a small factory a cinema with a nightclub and a large, splendid office building. He loved animals and there was a shelter in the office building with hundreds of dogs and cats and horses and other animals. Then the militia* came. They killed the boars and all the animals that could be eaten. Most of the dogs were shot right in their cages. The entrepreneur was tortured and it’s a miracle he survived.

There was a lovely family in Luhansk, volunteers who cared for animals. All of them died at the hands of the men with guns. There dogs were shot. The house was turned into a headquarters, their valuables were stolen and their cars were taken.

A friend who helped us with food for the shelter and driving animals to the clinic went missing. One day people came to his house with machine guns. They took away his gear, money, cars. He was tortured with an iron and then just dumped in a field. When he made it back to the city it went to the militia headquarters and pointed out who was driving his car. They promised him that they would sort it out. A few days later he disappeared and was never seen again. He was the boyfriend of one of our volunteers and was just about to propose to her.

An anti-aircraft installation was set up near a shelter in Luhansk. Some drunken militiamen from the installation went to the shelter and amused themselves by shooting at the dogs. The owners and staff were told they would be shot if they interfered. The militia killed about 15 of the animals.

At an animal shelter in Makeyevka the family that looked after the animals there went out, under fire, to feed and water the dogs. They were stopped by the militia, the guy was badly beaten and their car was taken. If you speak up you will be killed.

As for animal welfare everything in the occupied Donbas is just like in Russia. Dogs are shot, poisoned, destroyed by any means and animal protection laws are ineffective. The situation in Ukraine isn’t great but we have laws, we listen to volunteers who care for animals.

We live in Kyiv now. We once ended up with 13 cats and 7 dogs in our flat for two days. They were from a shelter in Stakhanov and Luhansk and waiting shipment to Germany. We had no money to put them up anywhere and we already had our own three cats and two dogs. I still remember it with horror. I was ill and had to call an ambulance and the faces of the medics when they walked into our mini zoo were indescribable. I am grateful to my guy Maxim and thank him for always supporting me and particularly for not leaving home then! 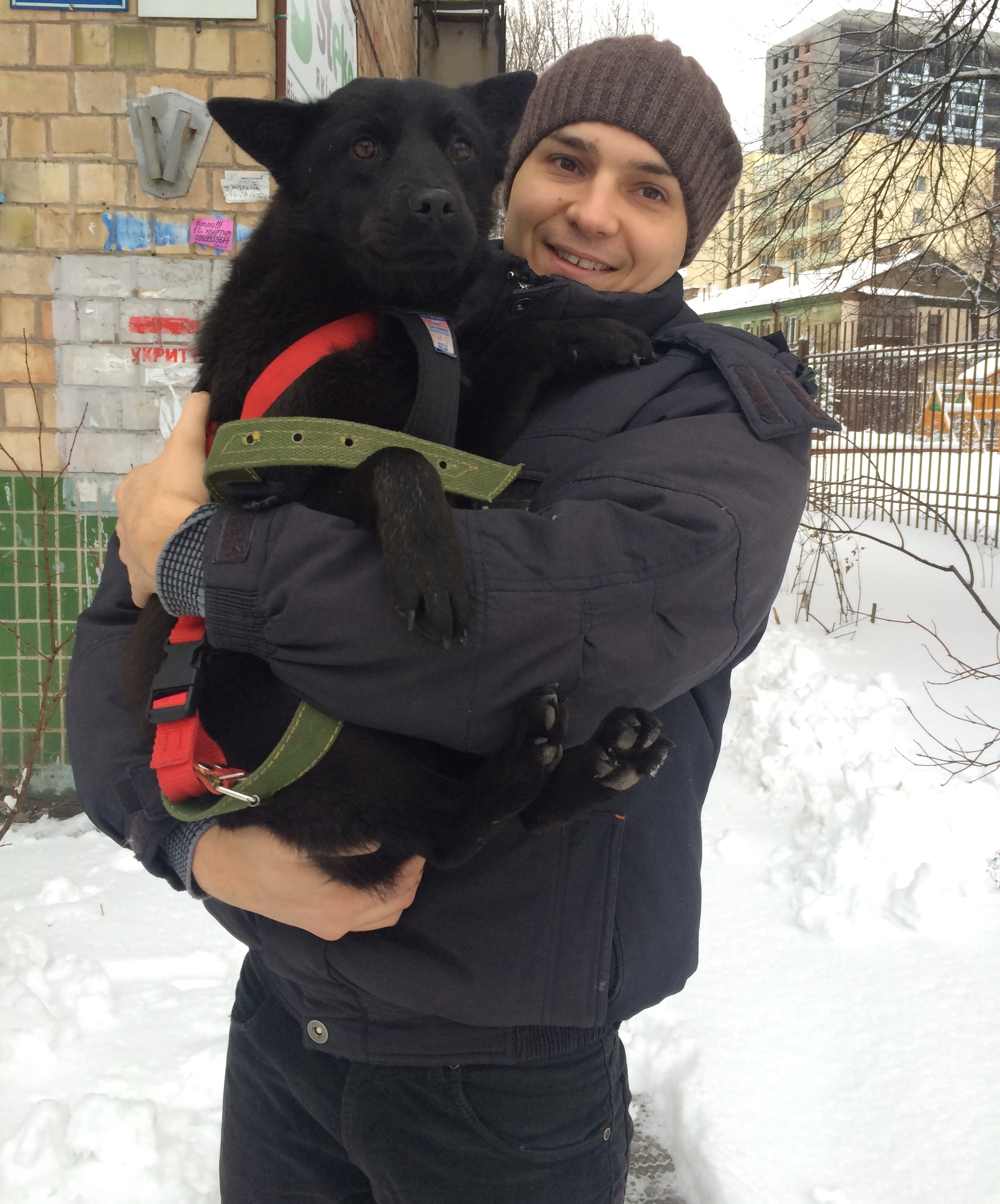 Maxim with a friend…

We are still taking animals from Donbas and finding them homes. The most valuable help you can give us is by giving one of them a home. We also need leads, collars, harnesses, dry food, flea and worm treatments, identification chips, vaccines. Above all we need money. The more financial help we receive, the more cats and dogs we can save.”

*Militia- local collaborators and mercenaries from Russia and elsewhere integrated with Russian army command but supposedly the armed forces of the fake Russian intelligence curated republics in the occupied Donbas.

You can contact Katrina on gavrysh.kate(at)gmail.com if you want to help her project