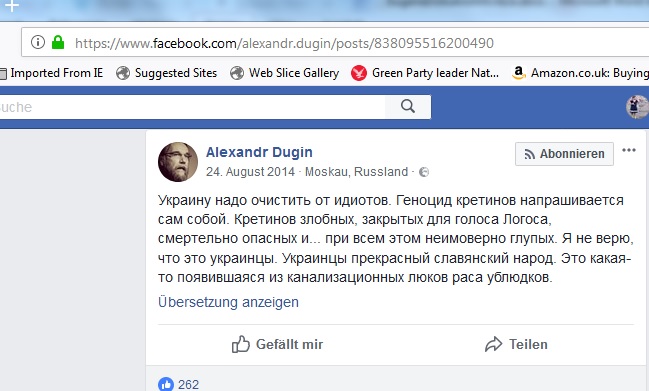 Eugene Dokukin wasn’t impressed when Mark Zuckerberg apologised for Facebook’s failure to tackle Russia’s abuse of the platform before the US Congress in April 2018. His address had previously been published by two Facebook accounts used by supporters of Russia’s terrorists*. Eugene  is one of the leading figures in Ukraine’s cyber war against Russia and regularly receives death threats from Russian Facebook accounts, couched in the most offensive language. The publication of his address arguably placed his life at risk.

One of the many threats that Eugene has received

He notes that that “there have been a lot of similar messages to me from 2014 onwards via social networks, along with the posting of my personal data. Facebook has always refused to delete such criminal accounts.” He stresses that the platform also blocks posts where he shares details of his operations against Russia’s terrorists. 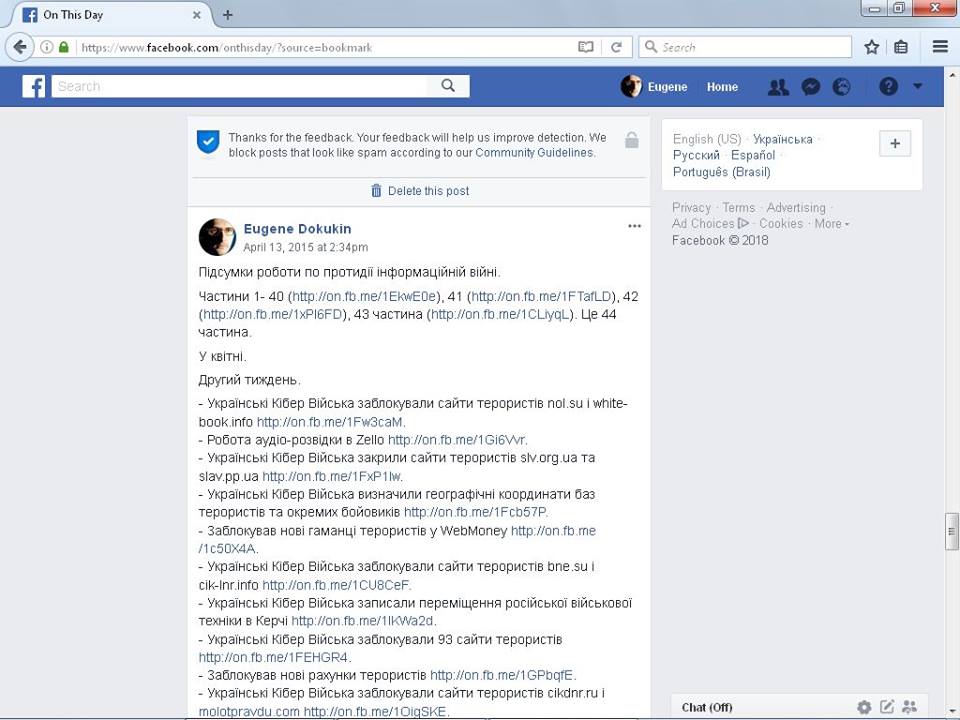 Facebook did not only allow the Russian intelligence linked terrorists to publish the personal data of Ukrainian activists and to send death threats to Eugene. The social media giant, along with Twitter,  has also blocked a large number of  Ukrainian activist accounts. Both platforms  ignored warnings from the Ukrainian government and activists in 2015 that their voices were being stifled. Zuckerberg argued, unconvincingly, that the accounts were deleted for inciting prejudice. One of the users temporarily blocked, Roman Burko, founded the open intelligence volunteer community InformNapalm. The site publishes OSINT and hacked files on Russia’s war and its atrocities in Syria and Ukraine. Does collating information on Russian war crimes constitute hate speech? Zuckerberg’s arguments might have applied to a number of accounts. But I have seen hate speech directed against Ukrainians, from Russian accounts on Twitter and Facebook. The platforms seem indifferent. Here, for example, is a 2014 post by Alexandr Dugin, a Fascist pseudo scientist, whose ideas are influencing current Russian military strategy:

Alexandr Dugin, Russian Fascist, academic and military strategist, calling for a genocide of Ukrainians in a post which, apparently does not breach Facebook’s standards…

The post, roughly translated, is that typical mixture of race hate and gobbledygook beloved of Fascist ‘intellectuals’: “Ukraine needs to be purged of idiots. The genocide of cretins suggests itself. These evil cretins are closed to the voice of Logos and fatally dangerous… and along with it incredibly stupid. I don’t believe these are Ukrainians. The Ukrainians are a beautiful Slavic people. These are a race of bastards that have emerged from the sewer.”

I invite Zuckerberg personally to explain why this post was not taken down,  why Dugin’s account has not been deleted, and how Facebook deems it not to incite prejudice. 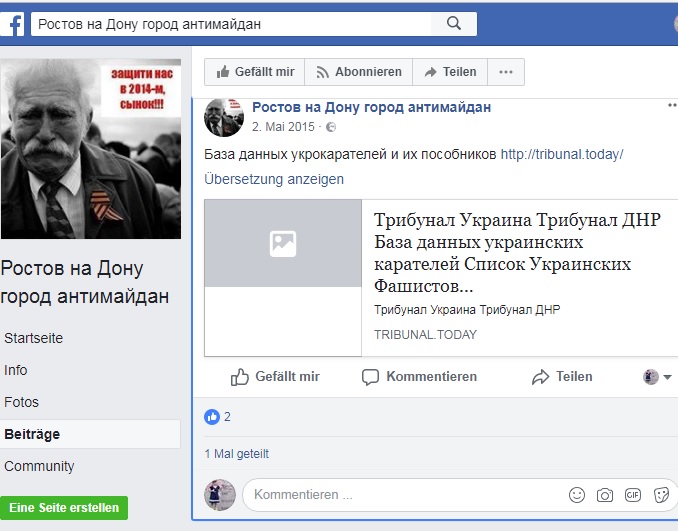 Facebook’s willingness to allow Russian fascists and terrorists to use their facilities is matched by that of other western firms. Dokukin has been conducting a solo crusade against these companies since 2014. The range of services provided runs from the provision of geo coordinates, which are used to attack Ukrainian troops, to financial facilities, web hosting and SSSL certificates. The companies involved include Google, Facebook , YouTube, PayPal, CloudFlare and many others. Dokukin has closed down hundreds of accounts and sites run by Russia’s terrorists that use these services. Yet, as he acknowledges, it will ultimately require legal action against these firms before they stop allowing their facilities to be abused. He argues that the US firms in particular are in breach of the spirit of legislation targeting terrorist organisations.

Eugene has been searching for a lawyer to tackle them since 2014. One of the problems he faces is that the organisations are not deemed to be terrorist entities in the US. It has been suggested that this is because they do not present a direct threat against its citizens. However, they are part of a package of measures that is corroding the fabric of western society. The lazy assumption that the west can fight till the last Ukrainian soldier for its freedom may ultimately result in the collapse of the EU and NATO and a major war involving nuclear weapons. Any lawyer picking up the banner of Eugene’s crusade might face the onerous task of persuading the US to classify these organisations as terrorist groups. Yet, looking at Russia’s increasingly successful subversion of the west, including manipulating its elections, can they afford not to?