The Death and Resurrection Show; Babchenko’s staged murder and bias against Ukraine 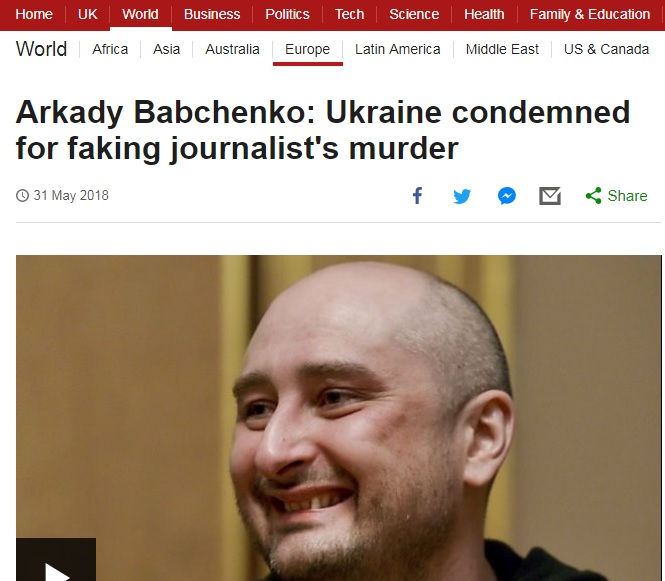 On Tuesday 29 May Arkady Babchenko played the leading role in the dramatization of his own murder. A fake hitman “shot” him and Babchenko, who had practised falling for the role, collapsed. The CPR staged in the ambulance failed, his death was registered, and he was rolled into a morgue supposedly a corpse. The mortuary doors creaked shut, the sheet was whisked away, and he rose from the dead beating Jesus Christ’s record by two days. During the hours that followed he had the unique opportunity to read his own obituaries, and know what his grief stricken colleagues thought of him.

However, when he appeared at a press conference organised by the SBU, Ukraine’s security service, reactions to his resurrection were deeply polarised. According to the SBU’s account, Babchenko’s assassination had been commissioned by Russia. A Ukrainian businessman, Borys German, had been recruited to organise the killing. He, according to some accounts, in turn hired Oleksey Tsymbaliuk, a Right Sector activist, and Donbas war veteran, to kill Babchenko, who then approached the SBU. Tsymbaliuk became part of a plan to deceive German and the organisers of the assassination. The staging of the murder allowed them to intercept a final communication from its organisers with a list of over 30 more targets. German himself has accused another Ukrainian citizen of running Putin’s slush fund for commissioning assassinations in Ukraine.

Babchenko had died so that he and others might live. However, the world’s media and journalist’s organisations were overwhelmingly critical of Ukraine, which had protected a journalist; there was little or no criticism of Russia, which had commissioned Babchenko’s murder. Ukrainians celebrated the success of their security service; but much of the world was more derogatory of Babchenko’s saviours than they were of his killers. There was no empathy for Babchenko, a man with the threat of death hanging over him and his family.

The criticisms of Babchenko, and the operation to save him are, almost without exception, ill founded. Some journalists argued that he should not have participated in a special op designed to deceive the public. The Committee to Protect Journalists queried why the SBU had accused Russia of organising the crime, but not provided evidence. Edward Lucas of The Economist stated that the SBU operation had confounded the problem of fake news. The OSCE representative similarly condemned Ukraine for spreading fake information. Kevin Rothrock, a journalist specialising in Russia, raged that he would never trust a report coming out of Ukraine again. There is, however, a clear difference between fake or junk news designed to conceal the perpetrators of a crime; and a deception designed to catch criminals. Furthermore, if it were not for evidence provided by Ukraine, including phone taps provided by the SBU, we would not know the truth about MH17. We would not have access to the hacked e mails of Surkov, the subject of a report co authored by Alya Shandra editor of Euromaidan Press, and the accompanying understanding of how Putin’s regime works. Ukrainians too have produced pioneering initiatives to tackle fake news including Stop Fake and Inform Napalm.

It was, of course, unreasonable of the CPJ to expect that the SBU would begin providing evidence that will not emerge until a trial is held at an initial press conference. Equally, it was ludicrous on the part of journalists to suggest Babchenko was wrong to take these steps to save his and his family’s life. Babchenko himself was scathing of his media critics on his blog. “They sit down in all seriousness, puff out their cheeks and begin to pour out their pompous moralising on the computer screen. They ….daub you with shit [when you have spent] a month living with the realisation that your death has already been paid for.”

Why is there so much negativity towards Ukraine? Moscow has been managing the west’s press corps for decades. In the nineteen thirties when Gareth Jones reported on the Ukrainian famine his fellow journalists turned on him. As Eugene Lyons noted in “Assignment in Utopia”; “Throwing down Jones was as unpleasant a chore as fell to any of us in years of juggling facts to please dictatorial regimes. But throw him down we did… in almost identical formulas…” In the years that followed Russia manipulated academics by using soft power, and masked the genocidal nature of the famine.

More recently Putin has successfully controlled coverage of his invasion of Ukraine’s Donbas. His promise to use Ukrainian civilians as human shields is rarely mentioned in coverage of the conflict. The invasion initially involved Russian special forces and paramilitaries seizing public buildings and posing as separatists. Rent a mobs were gathered in their support. A substantial area of the Donbas was seized by a hybrid force of Russian military and paid local collaborators. Yet this charade is routinely referred to as a civil war; the collaborators, their ranks swelled when Ukraine had no choice but to return fire on artillery positions based, as Putin designed, in civilian areas are termed separatists (and since Ukraine didn’t always retaliate the Russians shelled the areas they controlled themselves). The presence of Ukraine’s right wing founded Azov battalion is focused on; the far more significant role of Russia’s neo Nazis on the front line and in military strategy is ignored. More worryingly the pervasiveness of a neo Nazi ideal of establishing Russian supremacy over Eurasia is rarely explored. If other nations were aware of the insane thinking pervading Russia’s elite they might be more prepared to deal with Russia’s hybrid assault.

Journalism is failing Ukraine and the west now as it failed before. Western historians and journalists, for their own reasons, often act as conduits for Russian narratives. Ukraine lost a minimum total of 13.5 million people at the hands of the Nazis and Soviets. Yet pretty much no western historian pays due attention to this central fact of twentieth century history. That ignorance, and a callous stigmatisation as collaborators of a nation which lost more than any other at the hands of the Nazis (when collaboration was in fact more widespread elsewhere),  pervades the west and shapes its response to Ukraine. Similarly, Russia’s contempt for Ukrainian national identity pervades the usage of Ukrainian motifs in culture. Lufthansa and Apple produce ad campaigns which conflate Ukraine’s heroic Cyborgs and its capital Kyiv with Russia. The denigration of all things Ukrainian is picked up and amplified, note perfect, in many responses to Ukraine by a chorus of commentators seemingly unaware of who is standing at the conductor’s podium, or happy to benefit from their compliance.

While the SBU was being berated for saving a journalist, Roman Sushchenko a Ukrainian journalist, was being tried on fictitious espionage charges, having been held since 2016. He was sentenced to twelve years hard labour on 4 June. The Committee to Protect Journalists, which was swift and withering in its criticism of Ukraine, issued a muted, formulaic statement in response to the sentence. Indeed their initial response to his detention on 30 September 2016 was anodyne; reading it you might almost believe there was some substance to the charges. This at a time when Russia had lied incessantly over MH17. As regards the credibility of the espionage charges, Russia sentenced a Ukrainian to eight years in May 2018, on the grounds that he was planning to undertake acts of sabotage with a handsaw.

This was merely one in a whole series of faked trials, including that of Oleg Sentsov, who is currently on hunger strike demanding the release of Ukrainian political prisoners in Russia. His fellow prisoner Volodymyr Balukh, who was sentenced for the crime of flying the Ukrainian flag in Crimea, is also on hunger strike and in a critical condition. Oleksandr Kolchenko, who was sentenced alongside Sentsov is also on hunger strike, now. And Russia is denying Oleksandr Hryb, a Ukrainian teenager it honey trapped, kidnapped, and sentenced on bogus charges, the money he needs to purchase his medication. Ukrainian soldiers and civilians are dying on the front lines of a major land war in Europe, while politicians such as Macron fawn over Putin at economic forums, and head for the blood spattered World Cup 2018. Yet the real outrage, for many journalist and their organisations, was Ukraine’s blow against the Russian dictator’s hired killers and their success in saving a journalist. Putin will be encouraged by the antipathy towards Ukraine displayed in the aftermath of Babchenko’s resurrection. It will encourage Russia to commit the murder of more journalists in Ukraine, in the knowledge that, whether the SBU succeeds or fails in protecting its targets, Ukraine will be blamed. If they succeed all of those whose criticism of Babchenko’s saviours was skewed by unconscious bias, or deliberately malicious,  will bear a measure of responsibility for Putin’s next victim.

With thanks to Siriol Colley (1925-2011) who I was privileged to meet, for sharing her research and her books about her uncle, the great Gareth Jones, and restoring his legacy.