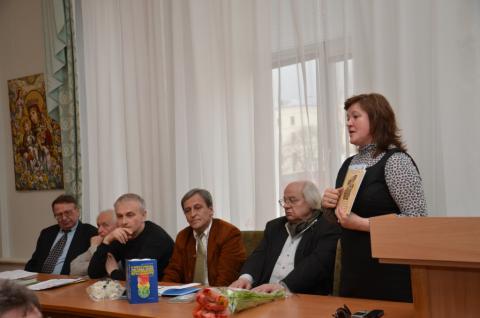 In March 2012 I met an alleged murderer. He had a firm handshake, and was rumored to be a KGB agent. I was presenting a book of my translations of Pavlo Tychyna’s work at the Taras Shevchenko University in Kyiv. It struck me that, lined up on the podium with me, there were representatives of old Ukraine. Oleksii Dovhyi, an old venerated author, who once headed one of soviet Ukraine’s largest publishing houses, had grown up in a peasant family with cows peering through the window of his childhood home. But now he had a driver and was able to give me a present, a Swarovksi crystal carved to the shape of a typewriter. Tetiana Sosnowska, Tychyna’s granddaughter, bristled with enough energy to power a mid-size European city. She was fiercely protective of her grandfather’s legacy and had organized my visit to promote his work. In front of us a couple of hundred students stood waiting for a new country to be born. None of us knew that 18 months later some of them would be piling tires onto burning barricades in the center of Kyiv.

However, the Ukraine I visited in 2012 was still under the control of President Yanukovych. He was born in Yenakiieve, Donetsk, in 1950 and soon acquired two criminal convictions. He and his colleague Renat Akhmetov rose to the top of the criminal underworld in Donetsk in the 1990s. Rivals were blown up with car bombs, and gunned down at airport terminals. Yanukovych would run for president in 2004 and won the first election with the with the enthusiastic support of dead people. However, an uprising compelled a re-run of the election. Nevertheless, Yanukovych’s resources allowed him to return and win the 2010 election. During the three years that followed he undertook a three year shakedown of Ukraine. As in Donetsk in the 1990s, rivals were prone to misfortune while he enjoyed unalloyed good luck.

Yanukovych’s politics were pro-Russian, and Ukrainian culture was gradually being driven from public life. One of his MPs tried to acquire the Pavlo Tychyna museum in central Kyiv. It was as if one of Lucky Luciano’s minions had tried to buy the Ernest Hemingway Museum and gut it completely before installing a Jacuzzi and a mezzanine floor. A gang of men identifying themselves as lawyers tried to seize the office of Vsevit, one of the country’s oldest literary journals. Yanukovych was implementing Putin’s policies and destroying a national culture. His reward was to be left unmolested as he plundered a country. His residence at Mezhyhirya had vast grounds that were roamed by ostriches. He would launder money through various schemes, including fake book advances from companies that did not publish books.

Literary life under Yanukovych was strictly controlled, often with Russian involvement. In 2012 he even had to agree with Putin regarding how the bicentennial of national poet Taras Shevchenko’s birth would be celebrated in March 2014. During his reign a Ukrainian author I will not name oversaw the country’s literary life. She had reputedly worked for the KGB in the 1980s. One of her friends wanted to correspond with me about the Ukrainian diaspora. My hackles tingled. He was, I was told, a KGB informant. Yanukovych, like all autocrats, was as terrified of literature as Dracula was of sunlight. Two of his strategy unit attended some of the events Tetiana organized to publicize the translations of Pavlo Tychyna. During one of them I gave a talk on how Ukrainian literature needed rebranding and that there were similarities between promoting culture and commercial marketing. It may have been a horrible coincidence but two months later bill boards with Pushkin appeared during a Crimean election.

The publication of Ukrainian poets by even a small press in the west attracted some attention. The Yanukovych official whose intervention had saved Vsesvit even approached me indirectly about translating their book in 2013. I sensed that if I said no burly thugs would crawl out of the Kyiv sewer and smash the doors of Vsesvit down. So I said, ‘maybe’ and stalled for two years until Yanukovych fled a population in revolt against his brutality. He had tried to repress the nation by deploying snipers and murdering demonstrators. The nation set the streets on fire to guard their freedom.

In 2011 I had begun translating the work of Ihor Pavlyuk, a Ukrainian poet who began writing in as Gorbachev’s Glasnost began to corrode the Soviet Union. The book won an English PEN award in 2013 and would subsequently be voted the reader’s favorite on the PEN World Bookshelf in 2015. The literary triumph after Yanukovych’s downfall seems eerily apposite. As Liubov Holota, the author of “Episodic Memory”, a beautiful account of a soviet childhood, says Ukrainians are no longer afraid to speak truth to power. They are dismantling the visual iconography of occupation, toppling Lenins and soviet statues, and creating a new post-colonial literature. Oleh Shynkarenko has written a novel, “Kaharlyk”, which began as dispatches from an alternative reality on Facebook. The text, composed in blocks of 100 words, concerns a Ukrainian whose brain has been used by Russia to control military satellites. The book enjoys the support of Andrei Kurkov, who describes it as a Hologram novel, a serious of beautifully carved puzzles. Another author, Oleh Poliakov, has created a dystopian satire involving a troupe of big-nosed models and an attempt to change the human aesthetic. The war with Russia is poignantly evoked by Maxim Butchenko in “The War Artist”, a work of faction set in the occupied Donbas. Authors are playing with literary conventions like children with a sack of new toys spilled on the floor. Every day is Christmas now for Ukrainian literature. But what of the alleged KGB murderer? In societies ruled by terror you do not always know if the hand you shake has been dipped in blood – and the truth may be impossible to establish even after the dictator has fled by helicopter or been lynched- that’s the point.