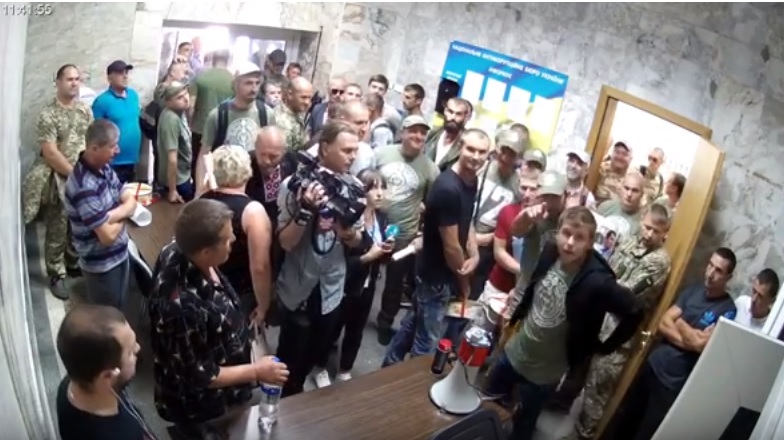 On 17/07/2018 Ukrainian anti corruption activist Vitaliy Shabunin suffered chemical burns after an assailant threw a green substance in his face outside the prosecutor’s office. The assault was the latest incident in the battle fought by Ukrainian oligarchs against anti corruption initiatives. The offices of NABU, Ukraine’s anti corruption bureau were vandalised by protestors on the same day. The assault on NABU is, according to the bureau itself, probably connected to Arsen Avakov the country’s interior minister. Avakov controls the police who stood by and watched as the offices were vandalised, and as Shanunin was assaulted. Similarly he is linked to the Azov battalion, perhaps the most prominent and controversial of the initial volunteer units which defend Ukraine. The battalion was initially founded by white nationalists, including Andriy Biletsky who was its first commander. The battalion includes approximately 50 members, by their own count, of a Fascist organisation called the Misanthropic Division which has recruited at least two British citizens to the unit. However, the incorporation of Azov into Ukraine’s national guard, and the varied beliefs and ethnicities of many of those in its ranks, make it impossible to characterise the unit as a nazi formation. Josef Zissels of the Euro-Asian Jewish congress argues that there are only 30-40 nazis in its ranks. Nevertheless the links between Avakov, Biletsky, and the thugs who attacked NABU show that Ukraine’s battle against corruption is also a battle against its extreme right.

The depth of the challenge faced by Ukraine is illustrated by the vast number of companies providing services to oligarchs enabling them to hide funds outside the country. The Intelligent Solution Group, (ISG) which is itself registered in Belise, is a typical example of how these companies operate.  The firm hawks ready made shell firms in jurisdictions ranging from Scotland to the Seychelles. These companies can be used for a variety of purposes. One entity possibly sold by ISG is linked to a Donetsk based Ukrainian oligarch involved in fuel trading. Another of their shell companies is connected to a Georgian involved in the privatisation of a mining company. There are dozens of these firms which may be similarly linked to oligarchic businesses. Whether these offshore vehicles are mechanisms for concealing assets is a matter worthy of further investigation by the authorities. The company also offers to assist its clients to secure “citizenship by investment” in a range of countries. The countries offering these schemes include Malta, whose offer of passports for cash was being investigated by the journalist Daphen Caruana Galizia when she was assassinated by a car bomb.

The ability to mask ownership via third parties makes the companies provided by ISG and similar firms particularly attractive for concealing revenue from illegal activities. In 2017 the tax authorities in Khmelnitsky province began investigating two firms listed as official suppliers to national military equipment manufacturer Ukroboronprom. They were suspected of being “fictitious entities”. One of the firms, “Patriot” is owned by the Scottish registered Morfo Global Ltd. Morfo Global Ltd was registered in 2016 and its partners are two Seychelles registered firms. The company has filed no accounts.

One of the most conspicuous uses of British and Scottish firms in a Ukrainian context is as vehicles for funnelling revenue from illegal coal exports from the occupied Donbas region. In October 2017 the zaxid.net site listed a number of firms allegedly involved in the illicit trade including the Scottish registered Bornholm Inter LP. While the firm’s ownership is masked a Ukrainian national Roman Vdovychenko is listed as “a person with significant control” as of 14 September 2017. He may be the prominent Donetsk businessman of the same name but the documentation does not allow us to establish that fact. And that perhaps is the point. Another UK based firm Coal Trade Antrahcit LLP was also allegedly involved in the illicit trade according to zaxid.net. The firm’s ownership was again masked, with two Belise registered firms acting as the “officers” and a Hong Kong firm listed as the “person in control”. However two Ukrainian brothers and business Serhii and Oleksandr Melnychuk are the firm’s ultimate controllers according to zaxid.net.

These examples illustrate the complexity of the challenge facing a country which is simultaneously fighting a conventional and a hybrid/information war against an aggressive nuclear power.Ukraine’s battle against corruption and its war against Russia and the right wing are all inter connected. The sniper massacre of February 2013 and the role of Right Sector in battling Yanukovych’s Berkut police and the Russian invasion have helped cement the role of the right wing as defenders of the country. Vyacheslav Likhachev, an expert on right wing movements in Russia and Ukraine, notes that Ukraine’s right is exaggerating its role in protecting the country while, simultaneously, Ukraine’s public is more willing to tolerate its violence against minorities. It is, of course, extremely difficult for Ukrainians who feel collectively threatened, to criticise those who are willing to risk their lives for their country- but the thugs attacking Roma camps are probably not in that category and are linked to Russia’s package of measures to destabilise Ukraine. Equally Ukrainians are themselves perhaps one of the groups who suffered most at the hands of xenophobes in their own country.

They were killed for their ethnicity and shot in the streets for speaking their own language at some points in the soviet era. They also were subject to the largest genocide within the boundaries of a single European state, the Holodomor, which involved an artificially inflicted famine and mass killings during the nineteen thirties. The source of this hatred was Russia, and Putin’s regime has continued that tradition, with the last Ukrainian library in Russia being closed, and blood curdling threats to eliminate all Ukrainians regularly being aired by Russian propagandists. Those who criticise the country’s difficulties rarely focus on the context within which Ukraine’s fight against its corruption and its own right wing is occurring. There is little empathy for a nation which suffered more casualties at the hands of the Nazis and the Soviets than any other people in Europe. Similarly there seems to be little equivalent criticism of Putin, who is leading a white supremacist movement across the northern hemisphere which is poised to destroy NATO and the EU. A fascist sits in the White House, and the United Kingdom is marching to the drum beat of a racist agenda inspired by Moscow. If the west wants to help Ukraine it should focus on helping the country defeat Russia, and defeating fascists sponsored by Moscow within the US UK and EU. If it views  Ukraine via a prism of stigmatising, Russia sponsored, they’re all corrupt Fascists, propaganda  it will soon find concentration camps for minorities opening within its own borders. Only when it understands that it shares a common foe with the Ukrainian people, a Putin led latter day Fascist comintern, will it begin to fight a war it does not seem to know it is losing.