A War of Words and Ukrainian Authors Part 7: the deranged genius of Antonych 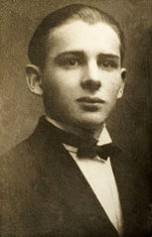 I first stumbled across Antonych in a musty Soviet edition of his work I purchased in 1993, during my first trip to Ukraine. The book was an impulse buy, partly because I was sickened by what I encountered in my ancestral homeland. Hyperinflation had transformed my auntie into a ‘millionaire’ and the interim kupony currency seemed to breed zeroes, like bacteria in a petri dish. A woman, the sickly yellow colour of ill health, fainted at a bus stop. Stalagmites of urine crystallised in the latrines of Kyiv station. I was in a country that was being born but, if there was a birth, there was a death also. When I opened the book it was like peering into a portal with a view onto another world. The cover may have been grey but Antonych wrote in hologrammatic ink. He evoked a Ukraine as fecund and pungent as a rain forest, where pagan gods haunted the shadows. His poetry has only rarely appeared in English. He is, for most Anglophone readers, an unknown quantity, as obscure as the Carpathian mountains glimpsed through the mist. Who was Antonych? Where was he from? And why is translating his poetry necessary?

There are some old photographs, which seem to preserve the subject in the amber light of a previous decade. Bohdan Ihor Antonych stares back at us from the thirties, sometimes with owlish spectacles, looking preternaturally boyish. He grew up in the Lemky area of Ukraine, which was then part of Poland, and was the son of a rural priest. The Lemky (Ukrainian: “Лемки”) were an ancient Ukrainian mountain tribe who lived a life that had remained unchanged for centuries. Their farmsteads clung to the Carpathian foothills and villages shadowed by mountain peaks like mute, indifferent gods. Their Ukrainian was rich with dialect words and their lives were governed by the rhythms of the seasons. The old, pagan deities lingered among the pine forests and haunted a superficially Christianised world. Antonych proudly declared himself a pagan and his poetry is redolent of the peasant’s affinity with nature. Yet he was, like John Clare, another superficially peasant poet, a deeply read and profoundly skilful writer. In his poetry, the boundaries between the narrator, the natural world and the music of the poems become blurred within an ecstatic pagan celebration of life. His boyish face reflects his almost perpetual sense of rapture, not only with nature, but with the human world. He can exalt in the sound of jazz from behind a wall in an alleyway, a heap of rusted cars, and a cloud shadow sailing over the pasture. This seemingly effortless febrile absorption in life masks his dedication to his craft. Antonych was only 27 when he died, but lived several lives in one lifetime, producing six collections of poetry, reams of prose, an opera libretto and an unfinished novel, as well as editing a couple of journals.

Although he would have been surrounded by people speaking the Lemky dialect in his childhood, he attended a Ukrainian language grammar school and, between 1928 and 1933, L’viv University. He wrote in literary Ukrainian, but his work was sprinkled with dialect terms and fevered energetic imagery. Moss warms “like cat fur”, and the nocturnal forest becomes an orchestra playing music that manifests itself as light. He uses many verse forms, ranging from sonnets comprising two quatrains and two tercets, to free verse, and numerous improvised stanza forms.

Antonych’s death deprived Europe of one of the greatest talents of his generation. His work, with its mystic overtones, was ignored by the Soviets. Starting from the mid-1960s, interest in his writing has revived in the Ukrainian diaspora, but he remains relatively unknown. His poetry, with its elemental power, is a worthy introduction to a great and neglected national literature.

Antonych and Ukrainian language literature remain curiously invisible in the Anglophone world. I could pick up English university text books in the seventies and see Ukrainian described as a dialect and its literature as “minor”. The West was blind to the reality of intra-European colonisation. The views of Ukraine’s colonising power, Russia, were treated as if they had the scientific validity of Boyle’s law. What I might call the Russian paradigm of a primitive Ukrainian peasantry being civilised by its more advanced neighbour prevailed. This is a gross untruth, yet it means that Ukrainian is reflexively treated as inferior.

However, Ukrainian literature has distinct qualities that renders it neither better, nor worse, than Russian, but merely different. Taras Shevchenko (1814-1861) may have been the only major nineteenth century European poet ever to have been owned by another human being. Tsar Nicholas I personally wrote on the order condemning him to exile that Shevchenko was “forbidden to write or to paint” (Plokhy 49). He, along with many other Ukrainian authors, represents, better than their Russian counterparts, the voice of the empire’s oppressed masses. In his work the often mute or comic peasantry of Gogol (or Hohol in its original Ukrainian form) and Chekhov acquires a tender humanity. The latter authors grew up speaking Ukrainian. However, the empire’s linguistic policy, its effective banning of a language, led to them writing in Russian, infusing that language with a quirky Ukrainian lyricism and grotesquerie. Even today there are a small and diminishing number of writers who translate their text internally into Russian. The very act of writing in Ukrainian was, therefore, an act of rebellion against imperial hegemony. Then, as now, the language’s subversive status resulted in a fecund experimentalism. Rory Finnin of Cambridge University notes that Ukrainian is therefore a literature of “rebels and risk takers” (Finnin).

The Empire, of course, always strikes back and, indeed, usually delivers the first blow. The long standing animosity towards Ukrainian culture emanating from Russia was summarised in a Chatham House paper of 2012:

Taras Shevchenko’s legacy, Ukrainian language, and the Ukrainian ‘national idea’ of the last two centuries … appear to be meaningless, second-rate or blasphemous to a large number of Russians. Generations of Russian intellectuals have turned belittling of the Ukrainian language and culture into a part of the Russian belief system, alongside anti-Tatar and anti-Muslim stereotypes. But, whereas the latter are built around national differences, what makes Ukraine stand out in this list is a dismissive attitude to any assertion that national differences exist.

However, Antonych, of course, lived and died in a west Ukraine that was under Polish control. During this period, the Polish State actively pursued the assimilation of Ukrainians via a programme of Polonisation. Polish language was imposed upon Ukrainians and they were required to formally identify as Poles in order to access certain occupations. Ukrainians, of course, are both perpetrators and victims within the history of their colonisation by other peoples. However, the cultural repression they experienced explains why their literature was marginalised internationally. Poland and Ukraine are embarking on a difficult process of reconciliation. Russia remains opposed to the very existence of Ukraine and still focuses on damaging the country’s image internationally.

Antonych’s work, and that of many other Ukrainian poets, survives because of that unique spirit which we have in part described, a fusion of literary talent and a pagan, rebellious spirit. I have noted that the very act of writing in Ukrainian was political. Antonych entered an ecstatic state to write his poetry. He is able to convey transcendence through his absolute commitment to his craft. He is also the representative of a pagan culture that survived, relatively unchanged, from the dark ages. He combines the visionary qualities of Blake or Clare with Shelley’s craftsmanship and David Gascoyne’s manic inventiveness. However, his brief life meant that his work represents only a fraction of his potential.

Why did I translate this book? There are other translations of Antonych which faithfully duplicate his verse forms and the structure of his collections in English. Yet his poetry has been cited twice, in 2013 and 2015, in the Finnegan’s List produced by the European Society of Authors. The list, which is drafted by prominent European authors, consists of work that is not sufficiently represented in translation.

Antonych has never been translated by a poet whose primary concern was to create a book of poetry in English and build him a reputation among readers, rather than linguists. This book is aimed at the reader of poetry who will, perhaps, have an image of Ukraine shaped by Russian soft power. My aim has not been to duplicate every one of his devices in English. All of Antonych’s poems are finely wrought, he loads “every seam with ore”. Yet, if we reflected all of these devices in English, we would murder the poem in the target language. As Jeremy Reed says:

poets are too often worked dead by translation. The substitution of one language for another, the attempt to match, word for word, the creative potential of the original, which is animated by virtue of the imagination charging the language, is the perfect means to making a poet redundant in a foreign language

If we are to render Antonych’s poetry effectively into English, we must reckon with the traditions of both languages. The poems in this collection are what Ukrainians might term a perespiv, a song over a song, and attempt to provide him with an English voice. I have structured the book so that it has the emotional logic of a collection of English poetry. The reader will perceive echoes of Dylan Thomas, W.B. Yeats, John Keats, and Percy Bysshe Shelley in these poems. Antonych’s poetry is both richly Ukrainian and yet it “has no nation but the imagination” (Walcott). His work belongs to that great literature which speaks to the one abiding collective, humanity.

Plokhy, Serhii: The Cossack Myth: History and Nationhood in the Age of Empires. Cambridge University Press 2012