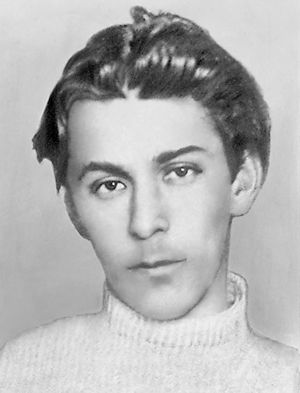 ways – one can acquire a huge

Mekon-like head or a thin and distended

feel that a similar process of distortion happens

with the translation of a poem. What

the translation shows us is not the poem,

but the poem warped by the vision of the

Dantes stare back at us from the various

bereft of rhyme to a Dante who appears in

seems to me that Musa’s version is more

faithful to the original. In abandoning the

rhyme he achieves the feeling of natural

speech – the illusion of reality which is

crucial to Dante and so powerful that the

writer was pursued through Florence by

the cry ‘behold the man who has been in

hell’. Sayers’s version, on the other hand, by

adhering faithfully to the rhyme scheme of

Musa, by betraying the original rhyme,

stays faithful to the spirit of the poem.

These issues were powerfully present

to me as I translated Tychyna’s book Solar

Clarinets. ‘Whose book?’ you will probably

1967) is the major Ukrainian poet of the

Clarinets (1918) focused on the themes of

nature, music and, in a certain sense, religion.

These poems evoke the landscape of

central Ukraine and the poet’s experience

of revolution and civil war, but combine

these elements into free standing musical

structures. The first poem, which can

be read as an epiphany experienced while

playing the clarinet, focuses on the musical

theme and acts as a manifesto for the rest

of the collection. The speaker of the poem

(the musician) experiences the intrinsic

structures of reality through music, and

conveys this experience through a series

of striking metaphors focused around the

clarinet. In the majority of the subsequent

lyrics the speaker of the poem will be audience,

rather than performer, to the math or

Over the road stands the willow

Catching the resonant strings of rain

Bowing with its branches as if saying

Such years, such without end

On the strings of eternity I play

of the 1920s during which Ukrainian

were followed by the Stalinist inferno. Two

were executed or rendered inactive by

the Soviet Police. They died in the underground

basements of police stations, in

Arctic labour camps; they were shot and

tortured; they died of hypothermia, exhaustion,

malnutrition. During this period

millions of Ukrainian peasants died in the

the Holodomor – Ukraine was surrounded

and food was taken at gunpoint in order to

crush the nation’s ability to become a culturally

Tychyna was one of the few surviving

members of this generation, which is

known as ‘the Executed Renaissance’. The

price he paid for his survival was writing

ream after ream of Stalinist doggerel.

The most notorious and typical example

of this poisonous material is “the Party

Leads” a celebration of mass murder which

was parroted by generations of crimson

Pioneers were communism’s answer to the

And all the Lords into One Pit

it to the English reader presents two

major challenges. To begin with Ukraine,

territorially the largest country entirely in

European culture. A lack of skilled

Ukrainian translators, a naïve tendency to

trust the official Russian line on an Empire

by violence means that Ukraine is

for many people still a part of Russia: the

Ukraine – a mere area and not a country

to saying that Dutch is simply a dialect of

German or Portugese a dialect of Spanish

– meaningless but potentially symbolic of

a wish to undermine a national culture.

presenting the poet you have also to present

his country and assume that the reader will

simply not have a mental vision of Ukraine

within which to place the work. It is easy to

imagine Rimbaud by the Seine or Dante in

the streets of Florence but behind Tychyna

The biggest challenge is presented by the

has seven cases, verbs may exist in

two forms, the word order is as flexible as

a bendy balloon. The agreement between

case endings which is echoed in the sound

for internal rhyming fully embodied in

Tychyna’s work. The language itself really is

the Solar Clarinet of the title poem.

The problem is of course that the effortless

music of Tychyna’s verse, which grows

out of the syntactical structures of the

However, there is at the heart of

his work a vision of nature and the world

which survives the transition into English.

The last poem in the book  was written before Crow

by Ted Hughes and before T.S. Eliot’s The

Wasteland – but all of these poems seem to

strings set to the same pitch.

These days translators of poetry are

moving away from a clunking attempt to

reproduce the verse structure of a foreign

poet and towards a more elusive quest for

that most vague of qualities – the essence

of a text. If there is a similarity between the

aforementioned poets it is not because

Tychyna was familiar with their work, but

because there is an elusive similarity between

the greatest writing; a congruence of

and Eliot, was able to stare directly into

the furnace of the twentieth century and

into the blank enigma of the human heart.