Triptrapping: Are There Trolls Under Scotland’s Bridge?

For me the last two years has been painful. The last eighteen months in particular, as the world has caught up with Alternative War and also the reality of a no deal Brexit. But sometimes a sliver of light shines through the darkness.

Several months ago, in the summer, Alyn Smith – an MEP for the SNP – contacted me and we discussed the conundrum facing next year’s European elections: how do you defend against electoral interference while the world is still falling to pieces from the last round?

There’s no short answer to that question, but we also ended up talking through concerns closer to home, in Scotland – a nation in its own right, operating under devolved powers, and which is a target for just about every group who use social media as a weapon. It’s actually one of the few ‘perfect’ petri dishes for the analysis of malign influence and somewhat a poison chalice in this respect too, as the McBot debacle sparked by Ben Nimmo of the Atlantic Council showed.

Though everything was screaming Don’t do it! I accepted Alyn’s commission for research to establish whether or not Scotland had a problem.

My final report, Triptrapping – Scotland and Social Media: Trolls Under The Bridge?, perhaps isn’t what people would expect. For one, it doesn’t feature lists of accounts named as trolls or bots. What I have done, however, is drawn the distinction between benign and malign accounts.

Benign, I categorise as irritating – so, pornbots and automated business accounts or general advert spammers.

Malign is very different, and I define such accounts as those “aimed at influencing public discourse by amplifying false, inaccurate, or dangerous information, and shows signs of tasking to these ends.”

4.25% of Scottish Twitter activity is identifiable as potentially malign, though this rises to a maximum of 12.24% in an assessment of certain account types. Of the 36.4 million tweets analysed, a potential maximum of 4.2 million tweets could be malign.

Working with my now long-term colleague Neal Rauhuaser, using his freshly revamped Netwar System, we collected 34,694,191 tweets for analysis from a total of 27,000 Twitter accounts. 9,981 were our central focus as they are publicly geo-located within Scotland.

Using a staged process of analysis, which also established the failure rates for the bot-spotter services used by millions daily, I found that 4.25% of Scottish Twitter activity is identifiable as potentially malign, though this rises to a maximum of 12.24% in an assessment of certain account types.

Catalonia presented one specific problem, and in the final report I explained this by summarising that: “External studies of fake news and bot targeting of Catalonia have established a significant degree of hostile state activity in stirring the crisis, partly in order to manipulate and provoke crises elsewhere but also to distract security services. This (and previous) research shows clear evidence Scotland was targeted and impacted by this activity.”

In other areas, the data clearly showed the term “Russia” is almost equal with “#IndyRef2” across Scottish Twitter, with nearly 140,000 tweets mentioning the country. Mentions of Sputnik, the Russian state broadcaster which operates in Scotland as a local channel, appears more often than the topic SNP Walkout in the sample.

The third-largest topic discussed on Scottish Twitter was Dissolve The Union and all malign accounts found within the research have been targeting this topic.

There was also a really neat botnet buried in the treasure trove of information, one of the tidiest I’ve seen. Dormant accounts with profiles signalling for independence but messaging against the SNP were last active in 2014/2015.

In general, though, I found Scottish Twitter is positive, with ‘life’ being the most used word in account profiles. The Arts feature heavily, alongside gin.

“Scottish Twitter does have a problem with bots, both malign and benign,

and the scale of the problem is quantifiable. This does have some impact

One of my key reccomendations is that the debate moves on from whether there is a problem on social media – especially as Twitter themselves have acknowledged they are dealing with half a million suspicious accounts a day in response to this report through contact with Alyn.

As I wrote in the report: “Scottish Twitter does have a problem with bots, both malign and benign,

and the scale of the problem is quantifiable. This does have some impact

It is time to focus, as far as I’m concerned, on governments working with Twitter to make the platform safer for all users. In particular as, if left unchecked, malign activity will increase over time, rather than remain static or decrease.

I also recommended that two crucial areas were pursued.

Firstly, that geolocation is enhanced, so when someone says they are from Scotland it’s either confirmed or the location as flagged as incorrect.

Secondly, it’s time we address the problem of anonymity versus accountability and I suggest this can be done by introducing a Scotland Verified status. This isn’t something complex, it’s the provision of ID to the platform which is then verified by the government under a working together arrangement. The upshot is that, while you could still be outwardly anonymous on social media, you would ultimately have to acocunt for your actions if you crossed the line.

I think we’ve conflated privacy and the right to misbehave for too long, if I’m honest. And if it means Scottish discourse on Scottish issues is safer for it, I can’t see a counter-argument. The same logic can be applied across the globe.

“If I could remind people of one final thing, hoping it leaves a lasting

impression: not every malicious account on social media belongs to a

With the report now released, the future is in Alyn’s hands – he’s already written to the boss of UK Twitter and I trust he will pursue what’s in Scotland’s best interests as doggedly as he represents them in the EU.

This morning he said: “I’m an enthusiastic user of social media, and it is broadly enriching

and empowering. But there are wasps in the room, and I’m grateful to

James Patrick for his independent report which will help us to, firstly,

know they’re there and, secondly, spot them.”

So one of the key legacy’s of the report and our work together is the launch of the Scot Or Bot website, a public resource which provides the tools anyone can use to help them identify a potential bot or malign account.

The reason the assessment is completed in steps is to empower you with as much information as possible to make a decision whether you block or continue to engage. The process is purposely designed this way to eliminate some false positives at a first glance and you should of course set using the service against the full report which explains the failure rates for each stage.

As Alyn highlights: “I do not have enough evidence to point any fingers in any particular

geographic or political direction – nor does this report – but it does

show that there is an issue we all need to work on…If you think an account on Twitter appears a bit strange, maybe it

is. This search site will allow us to indicate, not conclusively but to

at least test, whether something is what it seems.”

If I could remind people of one final thing, hoping it leaves a lasting impression: not every malicious account on social media belongs to a hostile state, some people are just utter c……….. 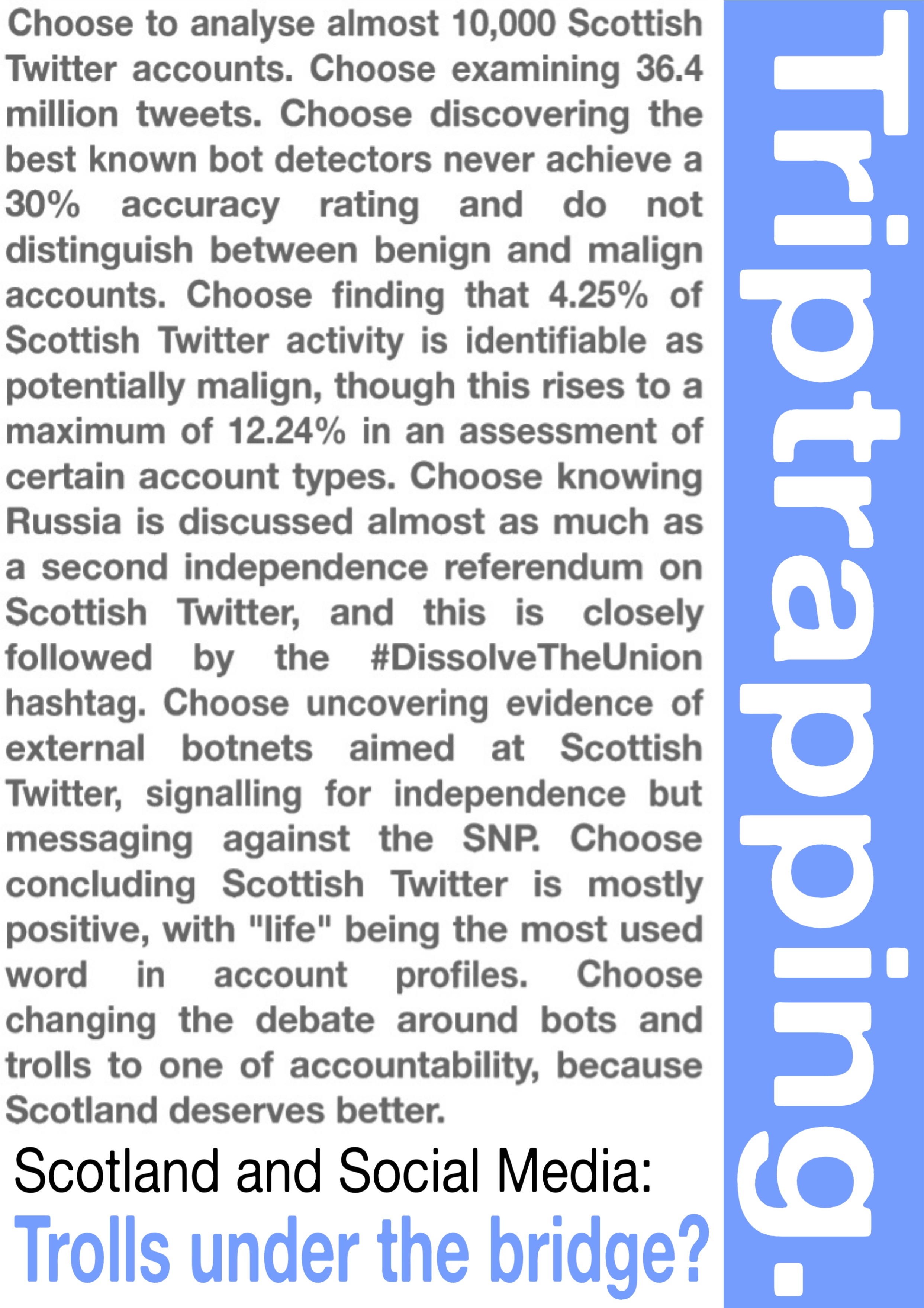 Infographic from Triptrapping – Scotland and Social Media: Trolls Under The Bridge?