A War of Words and Ukrainian Authors Part 10: An Executed Renaissance 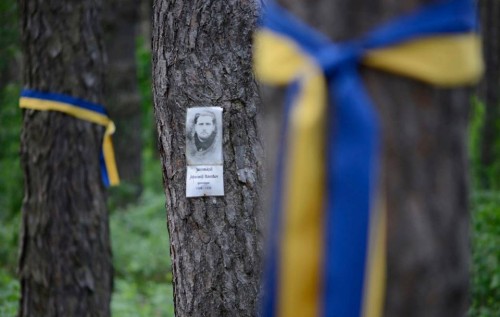 In the 1960s, the poet Vasyl Symonenko was walking in Bykivnia forest near Kyiv when he saw some boys playing football with a human skull. The graves of a vast number of Ukrainians, who had been murdered by the Soviets, were concealed among the trees. The skull had perhaps been exposed by erosion and surfaced like a dirty secret. Prior to the fall of the Soviet Union, the authorities had suppressed the truth about the mass executions of the 1930s.  Symonenko would ultimately be beaten up due to his interest in the site and die of the complications caused by his injuries. However, many of the trees are now adorned with embroidered scarves and the photographs of people believed to be buried there. The families of the dead can at least commemorate their loss. Similarly, the rural population, and those members of their family who had survived and moved to the city, were able to begin discussing the Holodomor, or genocide famine, of 1932-1933.

Rafael Lemkin described what happened in Ukraine during the 1930s as the “classic example of Soviet genocide”. The Soviet state sought to destroy Ukraine as a nation by targeting sections of the population. They exterminated the peasantry by means of an organised famine, now known as the Holodomor. The country’s artistic and literary elite was also targeted. In both cases, a deniable mechanism was deployed.

Stalin’s New Year’s telegram of 1 January 1933 initiated food requisitioning across Ukraine. He knew that there was no food to requisition and the measure would initiate wholesale confiscations of anything that might be edible. Pots of stew were overturned and flower seeds were destroyed. A subsequent directive on 22 January 1933 confined the peasants within the borders of Ukraine and the Ukrainian enclave of the Kuban. The pretext was that they were spreading anti-Soviet agitation.

The assault on Ukraine’s authors was more complex but comprised arrests on spurious charges and being dispatched to a labour camp or shot. During the 1920s, the Soviet state had actually encouraged Ukrainian in public life as it sought to gain the trust of the local population. The policy of governing in a republic’s native language was applied across the Soviet Union. However, because Ukrainian had been repressed under the Tsars, the result was a veritable volcano of uninhibited artistic expression, a true renaissance. The Tsars had arrested and exiled Ukraine’s national poet Taras Shevchenko and largely prohibited the language under the Ems Ukaz of 1876. Now authors, who were free to create in their native tongue, initiated an exuberant style which critic Yurii Lavrinenko termed “Clarinetism”. The term derives from Pavlo Tychyna’s 1919 collection Solar Clarinets. The aesthetic exuberance of these authors would form one of the pretexts for the arrest of several of their number.

The wave of arrests and executions that swept Ukraine from 1930 onwards was not duplicated elsewhere in the Soviet Union. The initial arrests and trials involved accusing authors and academics of being members of a “Union for the Liberation of Ukraine”. During the years that followed writers were arrested on various, often absurd, charges. They were shot or sent to labour camps to die of malnutrition, hypothermia, and/or exhaustion. However, the culling of the nation’s literary intelligentsia was never openly declared. A select number of the most prominent authors were terrorised into eulogising the Soviet state. These included Pavlo Tychyna, whose poems from this period read like brutal totalitarian chants; anthems to collectivisation and mass killing. Other authors evaded the bullet or the train journey to an arctic concentration camp in various ways.

Volodymyr Svidzinskyi survived until 1941 partly by severely restricting the volume of his published work, but was murdered by the Soviets as the Nazi armies advanced across Ukraine. Mykola Bazhan, a supremely gifted poet, produced a diabolical ode to Stalin. It should be noted that the majority of these writers were not anti-soviet power and many were communists. However, they wrote in Ukrainian and that in itself threatened the regime. Mykhailo Drai-Khmara was arrested in part because of a rather beautiful sonnet entitled Swans (Lebedi). The poem described five swans migrating to freedom and was interpreted as an allusion to his own work and that of his neo-classical Ukrainian colleagues. The poem, published in my impressionistic translation in Modern Poetry in Translation’s Centres of Cataclysm anthology, is an assertion of the right to free expression. Ukrainian poetry was a threat to the Soviets not because of its content, but because it was Ukrainian and contained the promise of a liberated imagination.

The names of many of these writers were erased from public life. The cultural repression within Ukraine was mirrored by the negative branding of the country abroad. Western literary critics would echo the views of their Russian colleagues… Ukrainian was a dialect of Russian… Ukrainian was a minor literature. Publishers, who would routinely commission a translation of a Russian poet such as Mandelstam, would never conceive of looking at a Ukrainian author.

Ukrainians are de-colonising their own country, toppling Lenins like skittles, adorning apartment blocks with gaudy exuberant memorials. But the empire exists in the minds and hearts of foreigners. Joseph Conrad, whose roots lay in Ukraine, wrote about how Russia appeared “Under Western Eyes”. However, the West still largely sees Ukraine through Russian eyes. Russian narratives dominate the western media where Ukraine is routinely portrayed as Fascistic, troubled, and lacking its own identity. Yet, in failing to understand Ukraine we fail to understand Europe itself and a Russian imperialism which is malevolently subverting liberal democracy.  It’s time the west heard the voices of these authors. If we fail to understand these voices from the past and their fate we may lose our own future.

Stephen Komarnyckyj is currently translating an anthology of work by the authors of the Executed Renaissance.

The poem below was written by Volymyr Svidzinskyi (1885-1941) in 1934 and is, in my view, the greatest poem written by any soviet poet in the Stalinist period. I make that assertion not because the poem is technically innovative but because it exemplifies what Keats called negative capability. Svidzinskyi will have seen the results of Stalin’s policies in Ukraine, but he does not moralise, condemn or posture. He simply conveys the effect on him, and therefore on anyone whose conscience was not poisoned by the party’s slogans, of what he experienced. He would later be burned alive by the NKVD, but the poem speaks as clearly to us now as it did then to those people who passed it from hand to hand. The poem’s genius is that it says everything by saying nothing, and the poet’s courage in facing both a hopeless situation and its deadening effect on him is inspirational. The English version is not literal but I believe it captures the essence of the poem, for I know that it is the lustreof the surface and not the gleam of the mirror that is important.

The lustre of surfaces dies into the shadow
And antique silence sleeps,
Like water decanted into a bowl.
Only my hands live,
Strange and separate,
Their movements
Compel me to meditate,
Like the whisper of a leaf.

I go to the window,
A broken post stands by the verandah,
Mould grows in the guttering
Where snowflakes gather in winter,
Where birds alight in the morning.
I press my forehead against the glass
And gaze for a while.

I don’t love the advent of night
It seems guilty, a dark linen,
The blurred green edges of vegetation.
A huge pool of silence accumulates.
Where have the birds gone?

The lustrous surface of things dies,
The curtains hang motionless
As if carved in stone.
In my defined circle of silence
I become more insensitive, and sad,
As a forgotten, Chinese lantern caught
On a branch in some old orchard.

Mykhailo Drai-Khmara (1889-1939) was a Ukrainian poet, linguist, scholar and academic and one of the many major authors who died during the Soviet state’s genocide of Ukraine in the 1930’s. This translation below has not attempted to capture the form of his beautiful neoclassical sonnet but is a semi regular sonnet. It reads fairly naturally in English while gesturing towards the discipline of the original. This approach allowed me, I hope, to capture something of the yearning for freedom of the original verse with its beautifully wrought style. The semi rhyme at the end is aimed in part at retaining the emphasis on the word life which concludes the original while evoking the feeling of a yearned for liberation (which thematically if not in terms of form is present in the original).The Lyra (Lyre) constellation consists of five stars. The five swans represent himself and the five neoclassical poets of his generation (Rylsky, Zerov, Fylypovych and Klen). The five stars they are guided by composing a lyre can be seen as their poetry which will lead them from Ukraine under the totalitarian winter of the thirties. He paid for this achingly beautiful poem with his subsequent arrest. He reportedly died when he asked a camp guard to take his life rather than that of a young student, and spat in the thug’s face. The guard emptied his clip of ammunition into Drai-Khmara who still managed to call him “viper!” as he died.

On the tranquil lake where willows dream
Long tamed by both summer and Autumn
They splashdown, flutter and swim
Their necks bend like heavily laden vines.
When frosts come resonant as glass
And waves whisper immersed in a white trance
These swimmers shatter the frozen space
Fearless, although winter threatens.
Oh cluster of five unconquered singers
Through snow and storm your song victorious
Breaks the apathetic faithless ice.
Be strong; from slavery and nothingness
Be guided by the constellated Lyre
To worlds of light, oceans of foaming life.

Yevhen Pluzhnyk ( 1898-1936) is customarily regarded as a highly introspective poet with a very individual style albeit one who championed the absolute value of human life. However this idealised portrait of a woman is reminiscent of the work of his neoclassical contemporaries. He died in a prison camp on the Solovetsky islands.

She approaches the sea, indifferent now
Herself to who she is.
Is that not all of us, at the same pitch
In swift and vacuous changes

She moves lazily the headscarf falls
At her feet, a crown transparent
On the slender stalks of her legs
Warm heavy full the flower blooms
Her body virginal, calm…

And she is embraced by the water
Its vastness surrendered to the wind
Until It seems Aphrodite has returned
In the white foam that bore her.