On October the 14th, an advert appeared on the Facebook Messenger app of users in Portsmouth. The link led to a website called Time To Take Back Control which is blandly branded in a rather somber, official looking deep red theme.

According to the web page it is operated by Global Britain.

The Facebook advert led to a page dedicated to cabinet minister Penny Mordaunt, the MP for Portsmouth North, under the bold heading “Tell Penny Mordaunt to stand by her manifesto pledges on Brexit.”

Facebook’s new rules on political advertising, requiring voluntary declarations of who initiated the campaign, kicked in on October 18th.

Once Parliament’s Fake News Inquiry, chaired by Damian Collins, began to take an interest in a dark campaign known as ‘Chuck Chequers,’ the Global Britain Portsmouth campaign was shared with him.

The Press Conference was decorated with Global Britain logos.

Time To Take Back Control’s website is a template which defaults to the same message as Mordaunt’s personal page, but substituting her name for Michael Gove. There are no links and no site maps which indicate the depth of the site or which other MPs have pages of their own.

A manual check has, however, revealed that the site was focused on members of the cabinet at the time the Facebook campaign was active.

The pages have all been archived to preserve them in case the site is deleted.

The Global Britain Facebook page has been heavily promoted over recent months.

It has also now emerged they have been running promoted campaigns on Instagram too.

The unaccountable campaigns are specifically targeted, in most cases, at MPs in positions of influence within the Cabinet, but do not work by directly lobbying the government itself.

Rather, they use voter targeting similar to that controversially used during the Brexit referendum campaign to persuade and instruct members of the public to contact their MPs with a specific message.

The campaigns play heavily on emotions in doing so, saying: “It would be an historic betrayal of our country and democracy to go back on the referendum vote and the manifesto pledges on which our Government was elected. What you say can be short and simple, but every call or email will make an impact.”

“Our future as a nation hangs in balance. Make your voice heard it could make the difference,” the campaign message adds.

This campaign is clearly aimed at influencing MPs and Cabinet Ministers’ views of “the will of the people” without transparency at any level.

MPs have repeatedly cited incoming contact from constituents as raising similar talking points to the campaign and, importantly, this appears to be shaping their actions in parliamentary activity.

Two of the Cabinet Ministers targeted by the campaign, Dominic Raab and Esther McVey both cited respect of the referendum result in their resignations.

McVey wrote: “It is about the future of our country and the integrity of our democracy. The deal you [Theresa May] put before the Cabinet yesterday does not honour the result of the referendum.”

Raab wrote: “I cannot reconcile the terms of the proposed deal with the promises we

made to the country in our manifesto at the last election.” 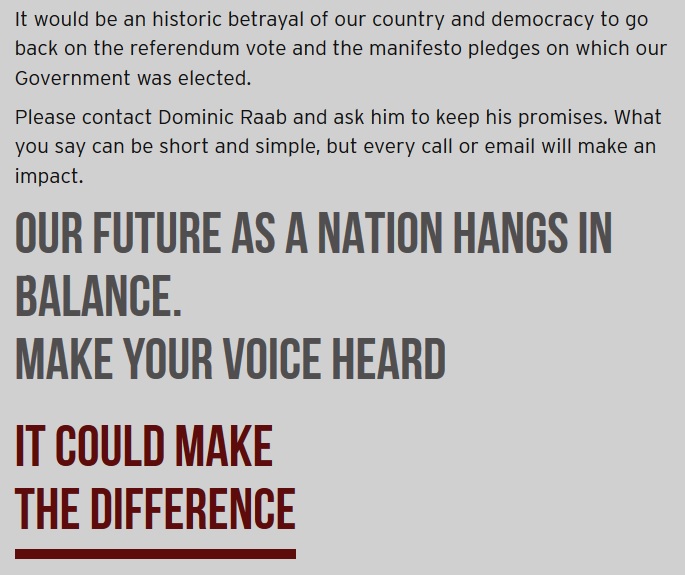 The Time To Take Back Control website is still currently live and is registered anonymously in Germany. It was first registered on October the 11th 2018, only days before the Portsmouth campaign was noticed.

Global Britain has a seperate website, also registered in Germany, with no additional business information listed on its contact page.

A search of Companies House records identifies a potential linked company as being Global Vision For Britain Ltd, which is in turn linked to Matthew Elliott and the 55 Tufton Street address of the Taxpayer’s Alliance through director’s records.

Elliott is currently listed as director of Business For Britain who, according to their Linked In entry, operated the official Vote Leave Take Control website during the 2016 referendum.

As Global Britain and the ERG are clearly closely associated, Jacob Rees-Mogg was approached to comment on the use of unaccountable campaigns. At this time he has not responded.

Earlier today a brief explanation of the practical application of dark influence or disinformation campaigns was made available via Twitter.