James Tindall is probably one of the nicest people on the internet.

After following each other for what feels like forever, we spoke properly for the first time yesterday after a few month’s back and forth about building his project: Emojiocracy.

James is a big believer in democracy and knows it can do better. That it can adapt to the online world and, in time, harness the bewildering power of connectivity for good. Which is what Emojiocracy is about – using the data made available in our online world to show how MPs vote and, eventually, tie it in with their outside interests, stripping down the mystery and doing that unspeakable thing: making politics more accountable than it ever has been before.

“The interface itself needs to be simple, something people can understand really quickly. So the emojis reflect gender, ethnicity, age. And then when you hover over you get to see the MP, what expenses they’ve claimed and even how to contact them or find them online,” James says. 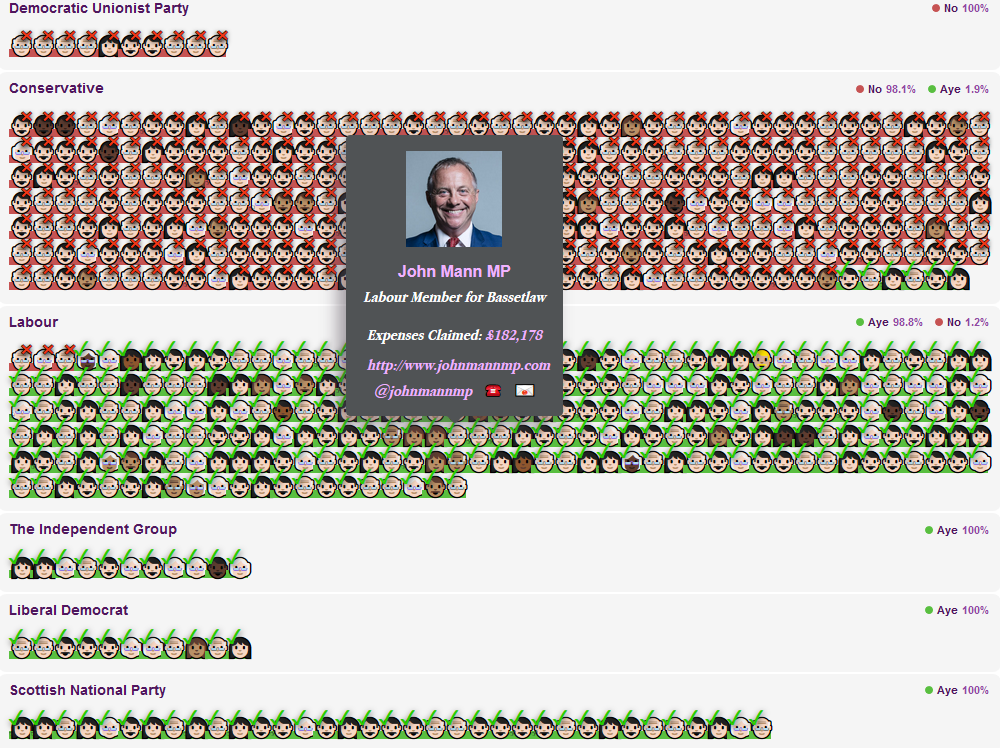 And it is a brilliant tool, functional, fast, and accessible. But it’s not just a cute database, it has the power to demystify so much more.

I approached James with an idea the other day and in a flash he had turned Emojiocracy into the digital equivalent of Toto, pulling back the curtain on a lot more than expenses and what has happened during previous votes.

Emojiocracy now uses the data on each MP and their voting history to predict how votes will go in future.

“What’s really interesting is the seeing how the terrain of the weighting data (resulting from the aggregated score from previous votes) interacts with the whip and rebellion levels. The base data is hugely significant. Which means that if we have any specific intelligence about the direction any MPs will vote in, we can insert it into our weightings and it will show up in the result,” James told me earlier, unveiling the Predicting The Commons tool.

With a series of important votes ahead, James started with the Cooper/Letwin amendment which has been largely hailed as the antidote to a no deal Brexit. 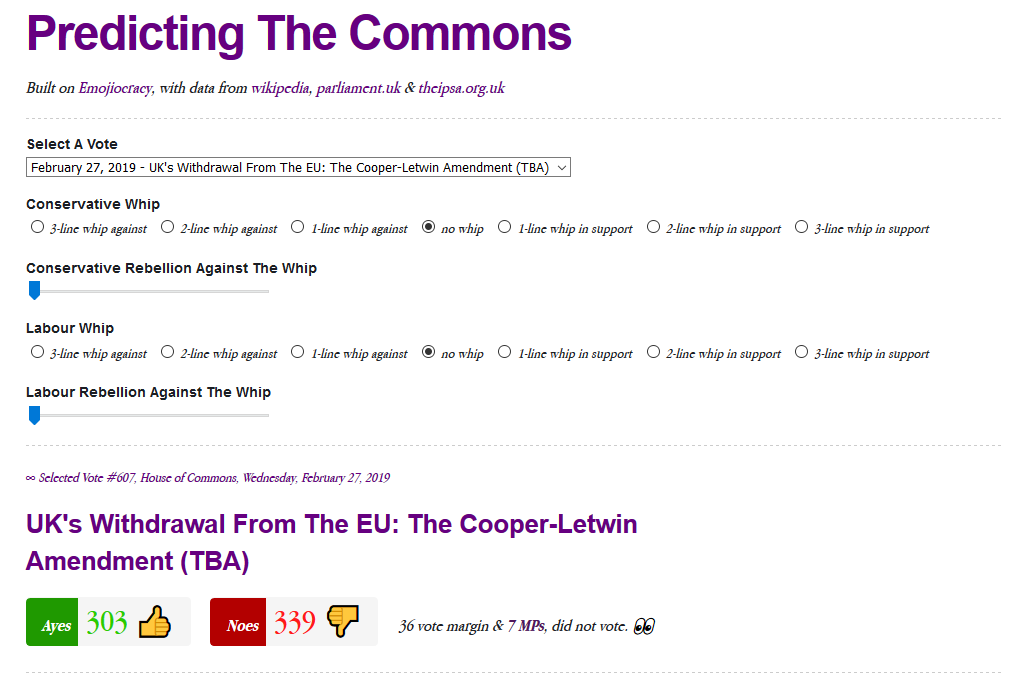 With a brand new interface that allows users to choose how the government and opposition will whip, and a slider which adjusts the level of rebellion, the predictive tool indicates that Cooper/Letwin would lose based on the previous patterns.

“You’ll notice that the more lines in the whip the less effect the rebellion slider will have,” James told me. “For the Cooper/Letwin amendment I also folded in a dataset I have detailing MPs who have voiced explicit support for 2nd ref and those who have are known to be explicitly against. The Tory data shows they have – so far – been extremely tribal but this may break at some point,” he added.

I set the whips to show the Conservatives running one line against, Labour three lines for, and chucked in small scale rebellions on both sides of the house. The result came to a draw. 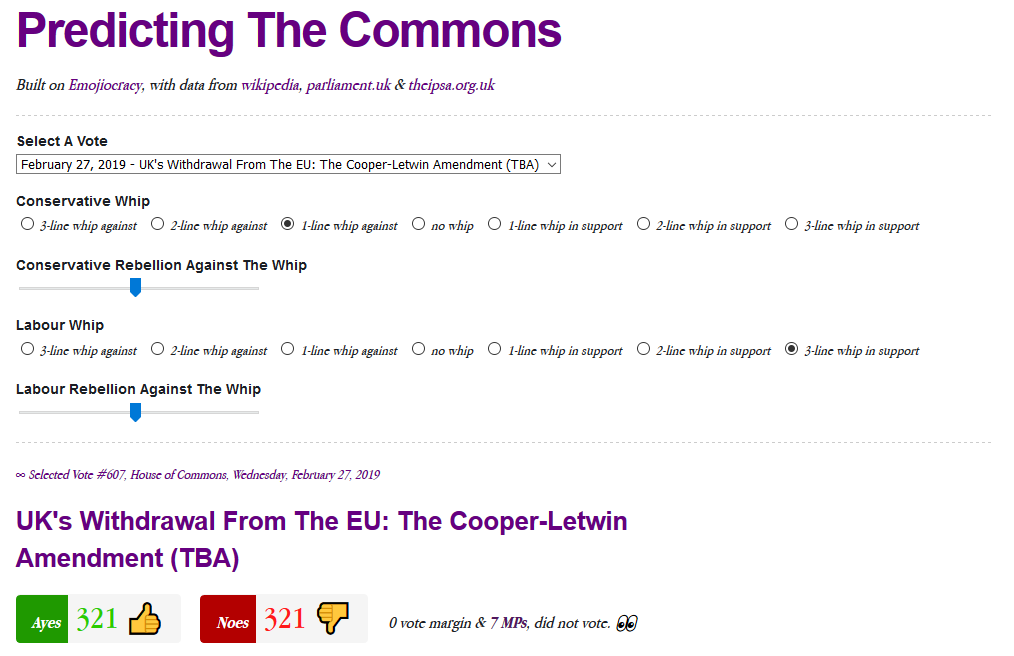 There’s a huge amount of power in the simplicity of what James has developed. Power to end to mystery of stuffy parliamentary procedure and to allow people to engage more with their MPs and any parties they are a member of. There can’t be any secrets or surprises with something like this publicly available, everybody can see how MPs are likely to behave and what the practical impact of that behaviour will be on matters of importance.

At some point, we will also be able to see the impacts of lobbying and dark advertising on this behaviour too, rendering it useless in the end by bathing it in sunlight.

With numerous rumours in the weekend papers of a significant Conservative rebellion in favour of Cooper/Letwin before May took the wind out of sails to a degree, I set three line whips and a maximum Tory rebellion to see what happened to the result. 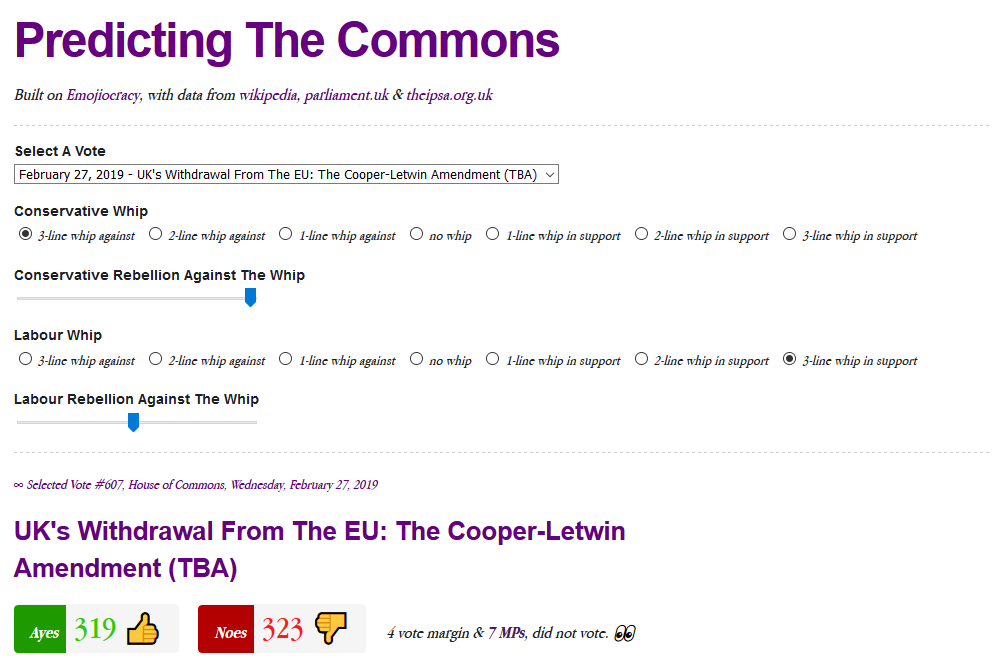 It’s fascinating, seeing the commons like this and, finally, it is all easier to make sense of. To get Cooper Letwin through the rebellion would need to smash the tribalism James mentioned to pieces and then some.

“The weightings for Cooper/Letwin derive from the aggregated no-deal votes,” James said. “And it’s the same for Kyle but with an addition of two lists of MPs explicitly for and against a 2nd ref.”

Kyle is the least likely amendment to succeed, despite being the favourite of those calling for a second referendum. Unwhipped, it faces the same fate as Cooper/Letwin’s first pass. But adding a two line whip against by the Conservatives and a lacklustre one line for by Labour – with the inclusion of a minor rebellion on the Labour side, the Kyle amendment is killed by a margin of forty. 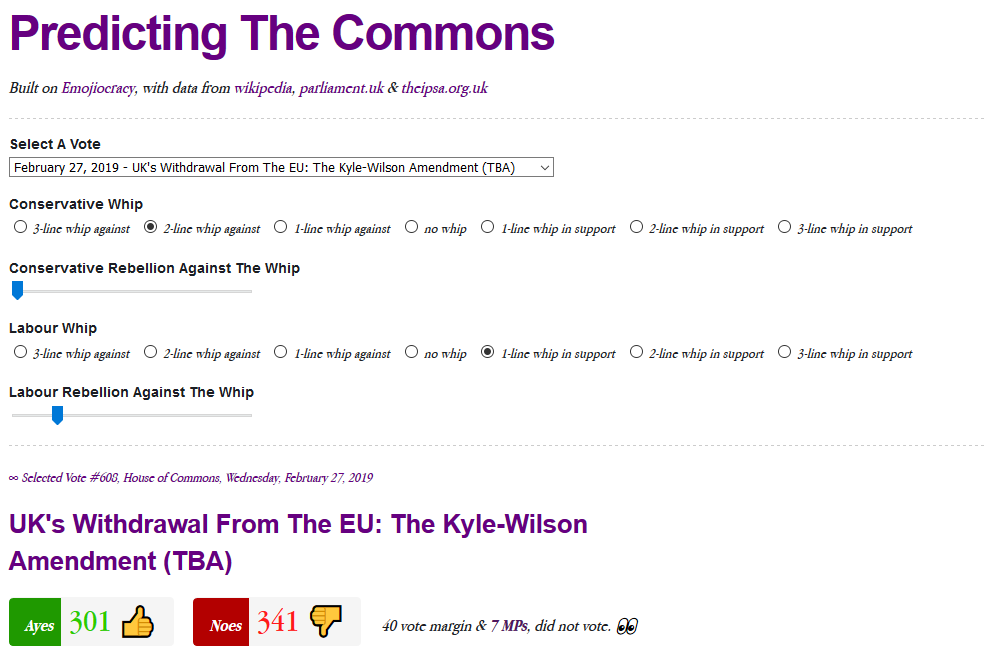 “Interestingly, if Labour imposed a 3 line whip in support of Kyle and there was even only a small Tory rebellion – it would be very very close,” James told me.

Just as we continued talking about how we though the public would receive the launch of the tool on Wednesday morning, ahead of the February 27 Brexit votes, Theresa May dropped a bomb in Parliament and said she was putting forward a vote on no deal if her deal was not agreed by mid-March, and that it would followed by a vote on extension if no deal was rejected. (James and I used the Emojiocracy tool properly for the first time when the last vote saw the symbolic Spelman motion against no deal squeak through by eight votes.)

“Every time there’s a human intervention something shifts. Corbyn has likely seen to it that Kyle will be withdrawn and similarly May’s announcement is likely to see the Cooper/Letwin amendment shelved too.”

There is one flaw with the utility though: humans.

“Something the prediction lacks is coverage of who’s likely to abstain or be absent – I can’t quite get my head around how to predict that just now, it’s probably possible though,” James said.

And it can’t be perfect, not yet. Every time there’s a human intervention something shifts. Corbyn has likely seen to it that Kyle will be withdrawn and similarly May’s announcement is likely to see the Cooper/Letwin amendment shelved too.

I asked if we could predict the vote on May’s amendment itself – and the subsequent votes on no deal and extension – expecting James to swear. He didn’t.

Those votes will be live on the tool when it is launched tomorrow morning.

In the grand scheme of things though, showing the world the Wizard of Oz isn’t all powerful is good enough…