The colour of Russian money part 19: how Latvia’s financial wizard made billions of dollars disappear…(part 2) 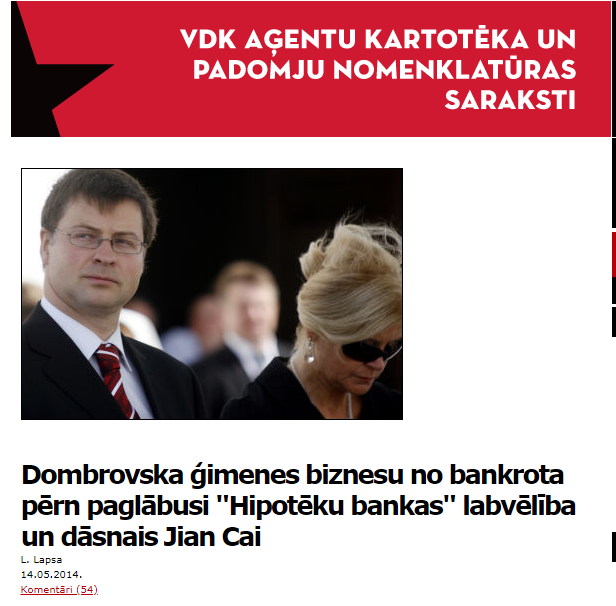 If Valerijs Kargins switches channels on the TV in his villa in Riga’s Jurmala resort and glimpses Valdis Dombrovskis on the news he might break into an affectionate smile. Kargins, who one of the ex owners and looters of Parex bank is officially a man of modest means but seems to have a magic purse which pours out gold coins. He and Viktors Krasovickis, who co owned Parex, officially have fewer possessions than the average Big Issue vendor yet inhabit palatial residences on the Baltic coast. Dombrovskis of course presided over the aftermath of the bank’s collapse when he was Latvian Prime Minister has also prospered and is now Vice President of the EU. There has been little scrutiny, with the exception of this column, of his role in the bank’s collapse. However, this is not the only unanswered question about Latvia’s former “financial wizard…”

Dombrovskis became an EU commissioner in 2014, after his government had agreed on a deal to save the mauled carcass of Parex that was effectively a multi million euro bung to the EBRD. Two years later in 2016 a Spanish magazine L’interviu published allegations that he had been bribed to support Catalonian independence. The journal cited a Spanish police intelligence report which supposedly stated that the bribe had been masked via real estate transactions. The funds had supposedly been routed via Sandra Bukane, Dombrovskis’s legal adviser and business associate. Dombrovskis had indeed appeared supportive of Catalonian independence in 2013. However, the EU Commission denied the allegations- and in 2017 Latvia’s anti corruption bureau stated that it had no evidence to support them. Nevertheless no legal action was taken against the journal and there are indeed some mysterious transactions concerning Dombrovskis’s real estate firm… these may have no connection to Catalonia but certainly raise questions over how rigourously the EU scrutinises the financial affairs of its functionaries.

Dombrovskis’s real estate firm “Land Development” had been struggling financially since 2008. The company was officially owned by his wife Arija Dombrovska and Bukane’s husband Indulis Bukans and had been kept afloat by loans from the Dombrovskis family and, crucially, a loan from the state owned Latvijas Hipoteku un zemes banka (Latvian Mortgage and Land Bank.) Dombrovskis apparently saw no conflict of interest in being Prime Minister at the same time as a state owned bank was financially supporting a firm his family part owned. The bank behaved with startling generosity allowing the loan to be extended frequently without any repayment of the principle. The transaction cost the Latvian state over EUR 1m by some estimates. The loan would ultimately be taken over by Latvia’s Rietumu bank … in which Sandra Bukane would ultimately become a shareholder (!)

In 2013 the company which really was a financial corpse kept afloat by the state owned bank’s loan made one of its few transactions. A Chinese citizen Jian Cai purchased an apartment from the firm for EUR 123228 according to the Latvian media. They also reported that Mr Cai received a residence permit at around the same time as the transaction. Interestingly Hengtong Group Co’s representative in Latvia in 2012 was a certain Jian Cai. Hengtong is a Chinese firm which specialises in fibre optic cable manufacture. He and Dombrovskis may have met at the Global China Business meeting which was held in Riga on 25-26 November 2012. They were certainly both present at the conference. It seems legitimate to ask if the Hengtong executive was the purchaser of the apartment…

Hengtong won a tender to provide the cable network for the Latvian National Broadband project in 2016. The company is key to China’s China’s “Silk Road” project which was launched in 2013. The project will establish a network of trading relationships along the ancient trade routes linking Asia and Europe. However it is not simply a commercial venture but should be viewed as a tool for extending China’s influence. Latvia sits at the western end of the road and is one of the entry points into the EU. Given the risk to democracy posed by autocrats and oligarchs the EU should really scrutinise its politicians’ links with shadowy regimes. Unless the EU addresses the security risks from China and Russia its countries will be transformed into authoritarian states run by vassals. Francis Fukuyama believed that history would end in liberal democracy; but we are witnessing the return of serfdom with oligarchs using puppet politicians to mesmerise their slaves with the illusion of freedom. We may be the last generations in Europe and the US which had a measure of genuine choice at the ballot box.