Stress and Instability: Debt and Risk Cast Shadow Over Bank of England Reports

According to the November 2017 Financial Stability Report (FSR), the Bank Of England have assessed that UK Banks have significantly strengthened their capital resources since the global financial crisis in 2008.

Leverage ratio is defined as the ratio of shareholders’ claims to total assets based on banks’ published accounts.

Liquidity and funding ratios have also improved over the same time period, the Bank Of England report says.

Profitability calculations are based upon “Statutory RoE” which is defined as “net income attributable to shareholders divided by average shareholders’ equity.” The Bank notes: “Underlying RoE strips out misconduct costs as well as one-time charges such as restructuring costs.”

The underlying figures show a significant gap between investment and retail banking.

According to the FSR: “Investment banking has been less profitable than before the global financial crisis.”

“an interest rate or unemployment shock could challenge households’ ability to service their mortgage debts subsequently having a direct impact on the overall financial stability of the UK.” 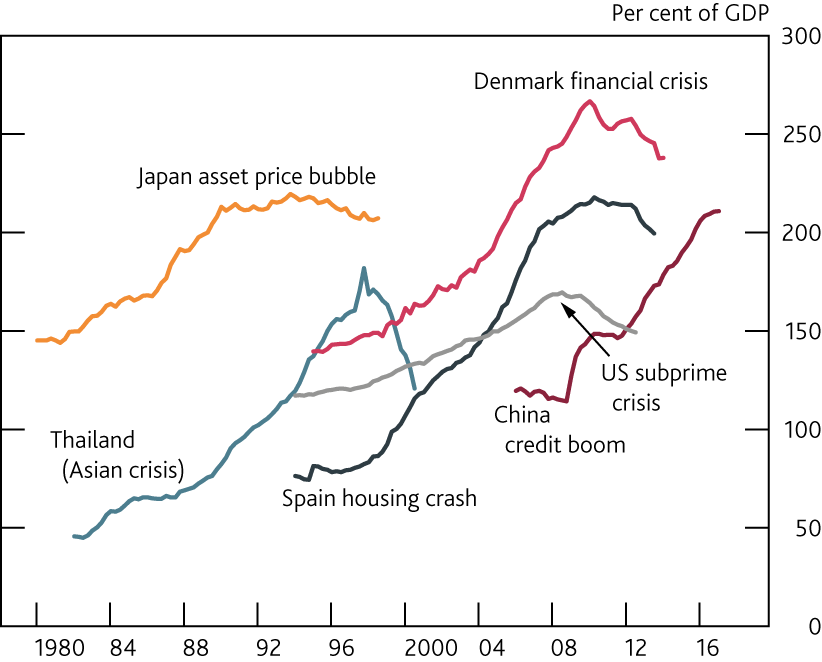 “UK banks have significant exposures to China, Hong Kong, the United States and the euro area,” the report adds.

Specifically stating: “Countries that underwent sharp credit booms have often experienced a crisis,” the FSR highlights that China has not yet experienced the apparently inevitable bust after boom.

The assessment shown in the graph is based upon lending to households and non-financial businesses, by all sectors, at market value as a percentage of GDP, according to the Bank of England. 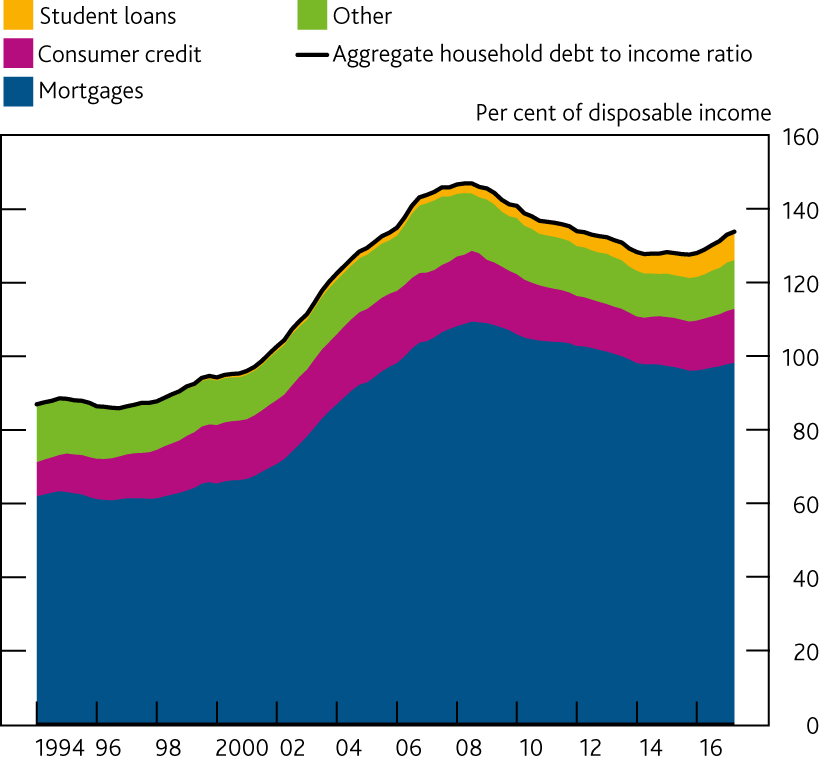 UK household debt remains high compared to relative to income, and is heading back to the levels seen just before the 2008 financial crisis.

The FSR specifically identifies that household debt poses risks to the financial stability of the country as a whole and the UK economy itself through two main channels.

Firstly, where the consumers tighten their belts, cutting spending and focusing on the repayment of debt and, secondly, where lenders incur losses through defaults and non repayments. The specific example given in the FSR shows how this relates to the UK’s £1.3 trillion in mortgage debt, and £0.2 trillion in consumer credit.

According to an NMG survey, cited in the FSR, up to 17% of households perceive themselves as vulnerable due to problems with debt.

The FSR sets out that an interest rate or unemployment shock could challenge households’ ability to service their mortgage debts subsequently having a direct impact on the overall financial stability of the UK. 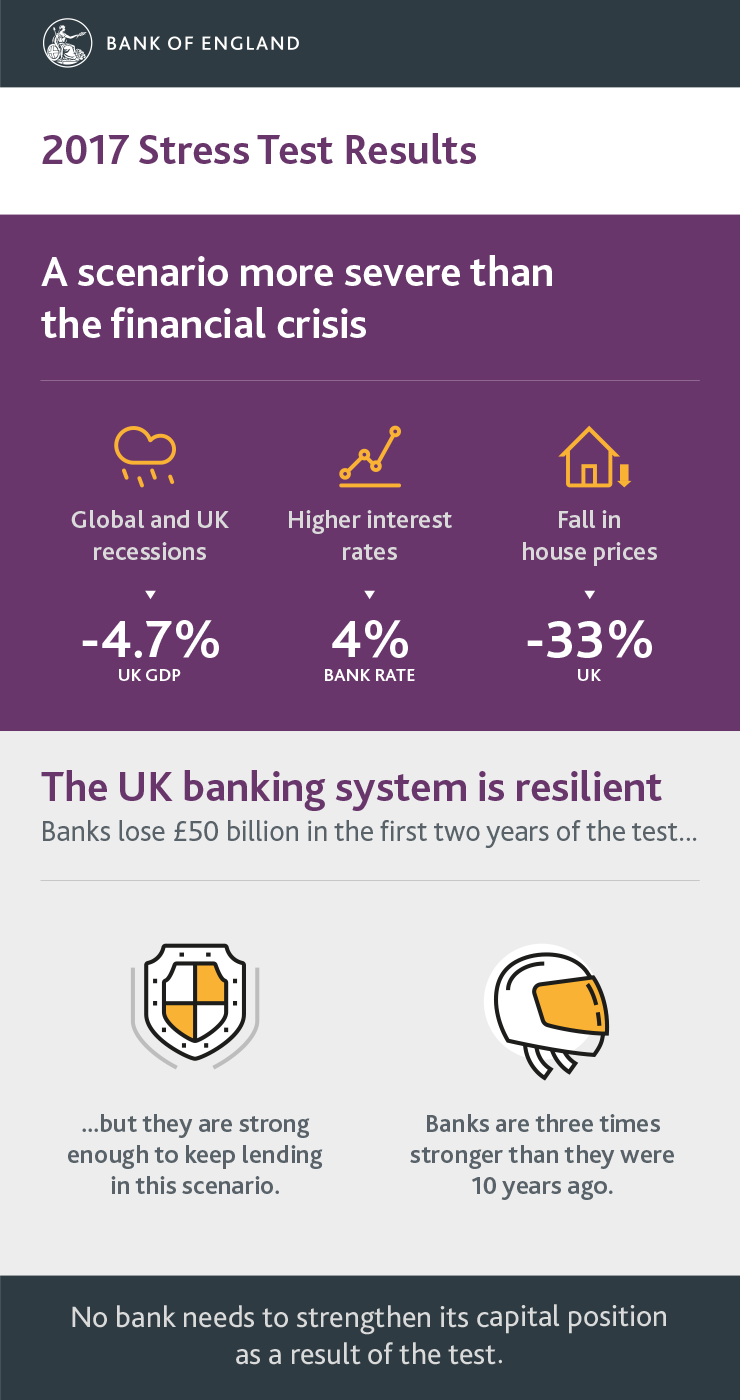 The Bank of England say: “no bank needs to strengthen its capital position as a result of the stress test.”

The 2017 assessment appears to show the UK banking system is: “resilient to deep simultaneous recessions in the UK and global economies, large falls in asset prices and a separate stress of misconduct costs.”

The economic scenario the Bank of England deploy in the test is, they say, more severe than the global financial crisis.

Under those conditions, UK banks incur losses of around £50 billion during the first two years.

The Bank of England highlights that: “This scale of loss, relative to their assets, would have wiped out the common equity capital base of the UK banking system ten years ago. The stress test shows these losses can now be absorbed within the buffers of capital banks have on top of their minimum requirements.”

“”UK households are particularly exposed to the risk of unexpected changes in interest rates.”

Despite the positive summary, the economy and the banks are facing the very real uncertainties of Brexit – an event which respected economists are forecasting would produce these effects and worse over a period of up to 60 years.

Combined with the Bank of England’s own concerns over household debt posing a major risk to the UK as a whole, as outlined in the FSR, a closer inspection of the stress test report exposes a new range of problems arising from the changes to banking since 2008.

Beneath the gloss of an annual test the banks have been subject for several years, a new biennial exploratory scenario has been introduced, exposing new risks around Fintech, Cyber Crime, and a lack of ability for the banks to realistically save costs while maintaining custom. 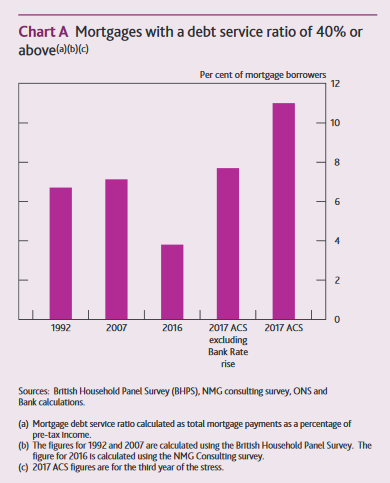 Firstly, the bank highlights a change in interest base rate under the stress test from 0% to 4% reduces the risk to banks by generating income under the conditions.

Secondly, they identify that higher interest repayments put borrowers under greater pressure leading to additional UK problems, with bank staff estimating the higher path for the Bank Rate leads to over £10 billion of additional UK impairments.

The chart shows how the interest rate shock combined with the large increase in unemployment in the scenario puts borrowers with mortgages under significant pressure by historical standards.

The Bank of England says: “Despite a relatively strong starting position, 11% of mortgage holders would have a debt service ratio of 40% or above in the third year of the severe stress scenario.”

Under this scenario, borrowers come under direct pressure due to either higher interest repayments on variable rate loans, or having to re-fix their loan midway through the stress at a higher rate, while pre-conditions to lending are tightened by the banks.

According to the report, the prevalence of short-term fixed rate mortgage contracts means: “UK households are particularly exposed to the risk of unexpected changes in interest rates. Around three quarters of the stock of mortgage lending at the end of 2016 was either on a fixed rate for a period of two years or less, or on a floating rate.”

The report identifies a secondary effect: ‘contagion’, whereby consumer credit borrowers with mortgages are more likely to prioritise higher mortgage interest payments at the expense of servicing their consumer debt.

“significant costs will likely arise from competition, loss of business,

loss of fee income, while banks will be faced with cybercrime prevention

costs and risks which may double their current estimates.” 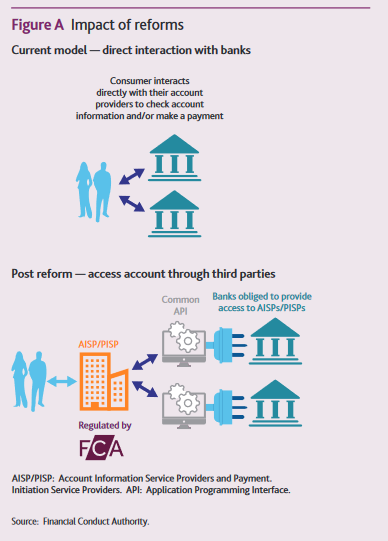 Turning to the impact of coming reforms by which third parties will need to be provide API access to banks to expand competition, the stress test revealed a host of new issue which the Bank Of England say are being approached too optimistically.

It highlights significant costs will likely arise from competition, loss of business, loss of fee income, while banks will be faced with cybercrime prevention costs and risks which may double their current estimates.

The combination is judged serious enough to call into question the projections of UK banks as regards their ability to survive the stress test scenario.

The Bank of England identified three important risks to the banks’ projections. “First, competitive pressures enabled by FinTech, and in particular the emergence of Open Banking, may cause greater and faster disruption to banks’ business models than banks project. Second, banks are projecting large reductions in costs and there is a risk that they will be unable to execute these plans fully while delivering a broad range of services, particularly given that the cost of maintaining and acquiring customers may be higher in the scenario. Third, in an environment of low growth and low interest rates the equity risk premium may be higher than banks expect,” the report says.

The Bank Of England will now discuss the results of the exercise with the UK banks, including the potential implications of these new risks.